By T D Isacke For The Mail On Sunday

Views from this hip new boutique hotel are sublime, especially on a windy day. Great whitecaps whip up on the Thames Estuary during my stay. Cargo ships churn through choppy waves towards the docks at Tilbury or out into the open sea. Clouds scuttle past. Lights glimmer on the far shore in Kent… this was where so many adventurers of bygone centuries passed into the high seas heading for distant shores.

Seven Hotel opened earlier this year and with its gold designer lamps, subdued dance music in public areas and a cool cocktail bar with velvet seats by the entrance, it’s a glitzy affair.

Purple lighting bathes the walls of the already-popular restaurant, Aurum, headed by talented chef Simon Webb. He used to work at the Langham Hotel in London but decided to ditch the capital and keep his first-rate cooking skills closer to home. He already lived locally, so he used to have to commute into London.

Stylish: The facade of Southend’s Seven Hotel, which has 37 rooms divided over four floors

Organic, often locally sourced produce is used for contemporary dishes and Webb’s food attracts diners from across Essex (the 70-seat restaurant was crowded on my Wednesday visit). Aurum opens its doors to non-residents for breakfast, lunch and dinner so day-trippers can stop for refreshment too.

Seven’s 37 rooms are divided into cosy, calm and comfy categories, and are spread over four floors.

The best face the estuary and the world’s longest pleasure pier, which tapers out into the waves beyond the gaudy fairground rides. These rooms are pricier than those at the back but they are worth the extra expenditure.

Southend Airport is just a 15-minute (£10) taxi ride away, so Seven is perfect if you’ve got an early morning flight and need somewhere comfortable – and stylish – to stay the night before.

Why not start your holiday with a burst of the Great British Seaside in Southend? 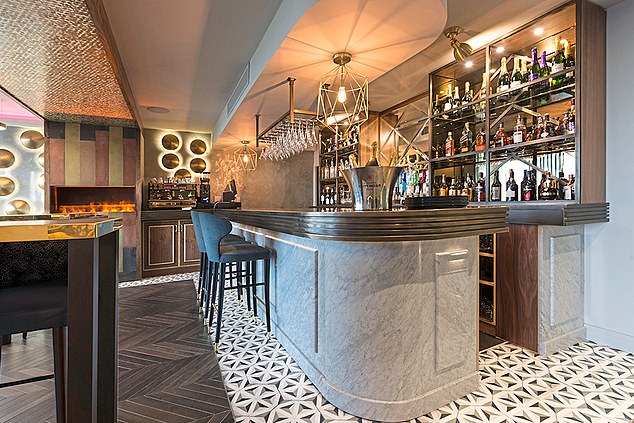 The USP: Southend is renowned for its 19th Century pier and its sandy beach, flanked by family-friendly attractions from the fairground and aquarium to The Cliffs Pavilion. It’s also a good choice for walks along the coast in either direction.

The rooms: Design-conscious with a sleek, pared-down style – a look that continues in the sophisticated bar and restaurant. Brass fittings abound, from lamps to bathroom taps, shower-heads, and even toilet-paper holders.

The food: Aurum offers a mix of seafood, steaks and seasonal produce. My cured salmon starter with capers, watercress and sharp dressing got the tastebuds going, while the main of Brixham hake with confit chicken and charred sweetcorn was first-rate. Three courses are from £28.