Women are reaching the peak of their earning power in the forties for the first time as fewer are forced to take lower paid jobs or quit work completely after having children, official figures revealed today.

And in another step forward for female workers – for those under the age of 40 the gender pay gap is now close to zero, according to the Office for National Statistics.

It is a landmark moment because figures from previous years revealed that average weekly earnings fell by around £30 when a woman reached 40.

This is because in the past men were handed promotions and saw their pay surge as many more women took lower paid jobs or left work completely to care for their children.

But overall the gender pay gap for all full-time workers in the UK has widened slightly in the past year to an average of 8.9 per cent – up from 8.6 per cent in 2018 – having barely narrowed since 2012.

To see the data for your job, use the module below.

The difference in pay of all men and women workers, including those in part-time jobs has fallen from 17.8 per cent in 2018 to 17.3 per cent in 2019, and continues to fall, today’s report said.

The key findings of the report are: 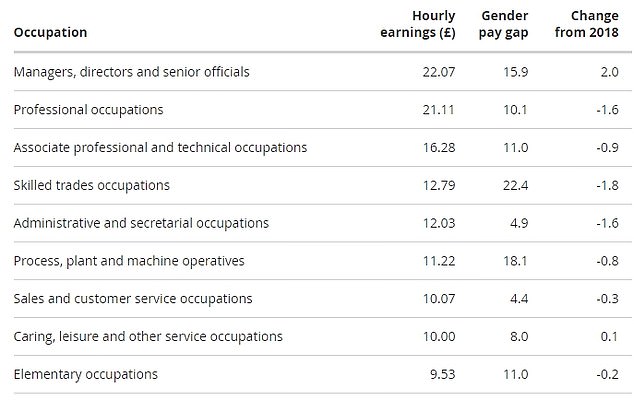 Average weekly earnings for full-time employees has increased by 2.9 per cent to £585 from last year, but after inflation is taken into account, the increase is just 0.9 per cent.

Weekly earnings for women peaked for those aged 40 to 49 in 2019 for the first time, the report said.

Full-time weekly earnings were the highest in the City of London at £1,052 and lowest in Newark and Sherwood, Nottinghamshire, at £431.

Speaking about the latest figures, TUC general secretary Frances O’Grady said it would take ‘decades’ to close the gender pay gap at the current rate.

She said: ‘Government must pick up the pace. It’s clear that publishing gender pay gaps isn’t enough on its own.

‘Companies must also be legally required to explain how they’ll close them.’

Sam Smethers, chief executive of the Fawcett Society, said: ‘Progress to close the gender pay gap is dismally slow and at this rate it will take 60 years to eradicate it.

‘Too many women are trapped in low paid part-time work or locked out of non-traditional sectors while others experience pay or pregnancy discrimination.’