This evening, like every Thursday since coronavirus blighted the land, people will gather in the streets, on their doorsteps, in their gardens, to pay tribute to the brave workers of the NHS.

We love our NHS. We lionise our NHS. We clap, and ring bells and bang pots and let off fireworks for the NHS every week. It was the focus of our Olympic opening ceremony in 2012, it is in our thoughts and prayers every night.

And some paying tribute will stand far too close together, as they did on Westminster Bridge last week, and cause it additional, unneeded stress. But that’s strangely appropriate, too. For if Britain loves its NHS so much, how come we sue it for billions every year? It’s a funny way to show our affection, don’t you think?

Of course, there are genuine instances of negligence and malpractice. Nobody would argue NHS practitioners and staff are infallible. Yet the steady growth in litigation over many years suggests more than a failure to maintain standards — it speaks of an opportunist culture, driven by elements of the legal profession, ambulance chasing in its most literal sense.

Daytime television is lousy with adverts advocating legal pursuit of medical professionals, on a no-win, no-fee basis. A quick online search reveals hundreds of law firms anxious to provide this service, too.

In the last NHS accounts, 2018-19, the cost of harm bill — the estimated claims bill incurred in one year — was approximately £9 billion.

In 2017, it was calculated that a one per cent pay rise for NHS staff required £500 million in funding. The cost of harm therefore equates to an 18 per cent pay rise — an increase the British public would no doubt support for nurses, if everyone could just stop suing them. And this is the tip of a legal iceberg. The estimated bill for all outstanding compensation claims racked up over the years comes in at £83 billion. In comparison, NHS England’s total budget in 2018-19 was £129 billion. In the maternity ward alone, for every baby born in Britain, £1,100 is incurred by the NHS in indemnity costs against negligence claims.

Modern Britain’s predilection for litigation is becoming an existential threat to the NHS. Doctors and nurses who once thought only of helping patients must now calculate how to avoid meeting them in a courtroom.

In 2018, a DJ from West Yorkshire, Sandip Singh Atwal, was jailed for three years in a case brought by Calderdale and Huddersfield NHS Foundation Trust, believed to be the first of its kind. Atwal was working for his family’s taxi firm in 2008 when he was attacked with a baseball bat, and attended Huddersfield Royal Infirmary.

He was treated for fractures to the index finger of his right hand, the ring finger of his left hand, and a laceration to his lower lip.

Atwal claimed the treatment was negligent, leaving him unemployed and dependent.

Calderdale and Huddersfield Trust offered £30,000 to settle the case. Atwal wanted £837,109, including substantial sums for future loss of earnings and care, on the basis of being unable to work and grossly incapacitated.

In a rare pushback against fraud, the trust produced evidence of Atwal working as a courier, lifting heavy items and dancing in a music video.

They proved he had fabricated the extent of his injuries, and Justice Spencer concluded Atwal ‘deliberately and grossly exaggerated’ the extent of his disability. As well as receiving a custodial sentence, Atwal was ordered to pay £75,000 costs. Notice anything, though? Despite the NHS trust disputing there had been life-changing negligence on its part, the default reaction was to offer £30,000.

This is close to standard procedure. With court and legal costs amounting to almost £3,000 daily, plus solicitors’ and barristers’ fees, it is considered more cost-effective to settle a smaller claim out of court than defend it.

The trust might not admit liability as part of the settlement, but fraudsters are not seeking moral victory anyway.

They walk away with a low four-figure sum without risk of interrogation. The vast pay-outs, of the type Atwal wanted, attract the headlines — but the sheer weight of uncontested claims at the bottom end chip away at the whole. 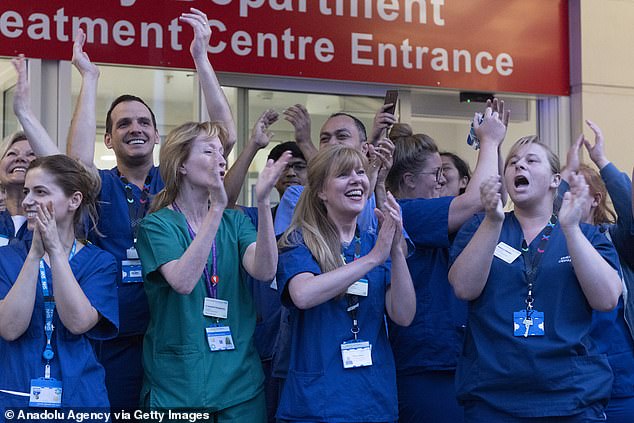 Some of the medical litigation commercials specifically target this area of negligence.

Yet the most frequent cause of pressure ulcers is also the obvious one: too many patients, too few nurses.

That is, however, the explanation frowned upon in any report. Say staff were simply rushed off their feet, and it’s as good as an admission of guilt. So there’s catch-22: you can’t tell the truth, because you’ll get sued. But you can’t invest as much as is needed in staff, because £83 billion has to be set aside for all the litigation. But we love our NHS.

Yes, the argument can be made that there wouldn’t be as many charges of negligence if the NHS was better financed and not so stretched. Yet that lets the chancers and litigators off the hook. And cases against the NHS have been on the rise for decades now. As far back as 2000, an Essex policeman, Martin Cottrell, tried to sue over a bungled knee operation, claiming £300,000 in loss of earnings.

Redbridge NHS Trust admitted negligence but the judge ruled Cottrell had colluded with his parents, wife and daughter to exaggerate the extent of his injury. He was awarded a reduced figure of £64,000, most of which went in costs. Even so, that was still £64,000, 20 years ago. Money the NHS did not have then; money it most certainly does not have now.

Nowhere in the hospital is safe. In 2010, Michael Darnley presented at Croydon University Hospital with head trauma caused by ‘unknown assailants’. It was Monday at 8.26pm and he was told by a receptionist at A&E that people were waiting four or five hours for doctors. This was a mistake. Any patient with head trauma is seen by a triage nurse within 30 minutes. It was claimed Darnley would have waited had he known but, after 20 minutes and feeling dizzy, he went home to take paracetamol.

He returned in an ambulance having suffered a bleed on the brain. He was left paralysed. The receptionists’ words sunk Croydon Health Services NHS Trust in court. Yet one can only imagine how busy an A&E with a five-hour wait for doctors must be.

Many patients were probably poorly served that night. Yet, as with bedsores, as with a loose paving stone in the car park — the latter and other accidents come under ‘Payments in respect of non-clinical schemes’ and amounted to £61.8 million in 2018-19 — little account is taken of mitigating circumstances.

When the NHS is finished with coronavirus what will the additional bill be?

We can clap, we can cheer, but will the system next be drowning in allegations of negligence and poor responses from overwhelmed wards? ‘Give it six months,’ as one nurse warned, darkly.