Trump brought up possible treatments including ‘injecting’ cleaning agents in the body and use of ultraviolet lights at Thursday’s White House press briefing.

Twitter erupted after the president made the baffling claims, with one person posting a picture of Trump as if he was asking a boy mowing the White House Lawn, ‘Have you injected your Dettol today?’

After the storm provoked by his comments, the company that makes Dettol said ‘under no circumstances’ should disinfectants be injected or consumed. 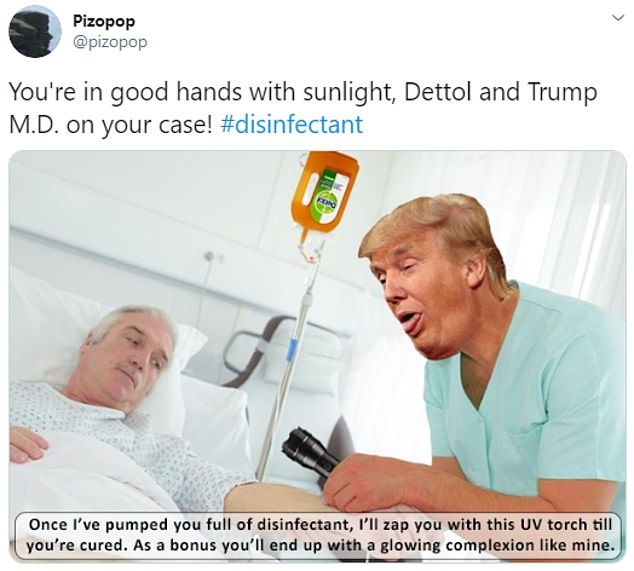 One user depicted Trump, who is not medically qualified, as a doctor standing next to a patient who is connected to a Dettol drip 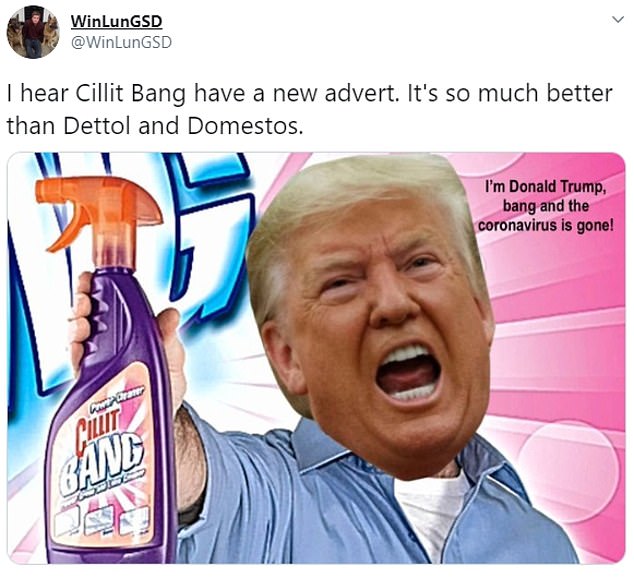 The President’s comments came following a briefing from William Bryan, a senior Homeland Security science and technology advisor, who delivered a report claiming that ultraviolet rays and heat have a potent impact on the pathogen.

The study also uncovered that bleach can destroy the virus in saliva within five minutes, while isopropyl alcohol took just a minute to kill it.

But the President’s unorthodox suggestions have provoked a flurry of memes from Twitter users.

One user depicted Trump, who is not medically qualified, as a doctor standing next to a patient who is connected to a Dettol drip. 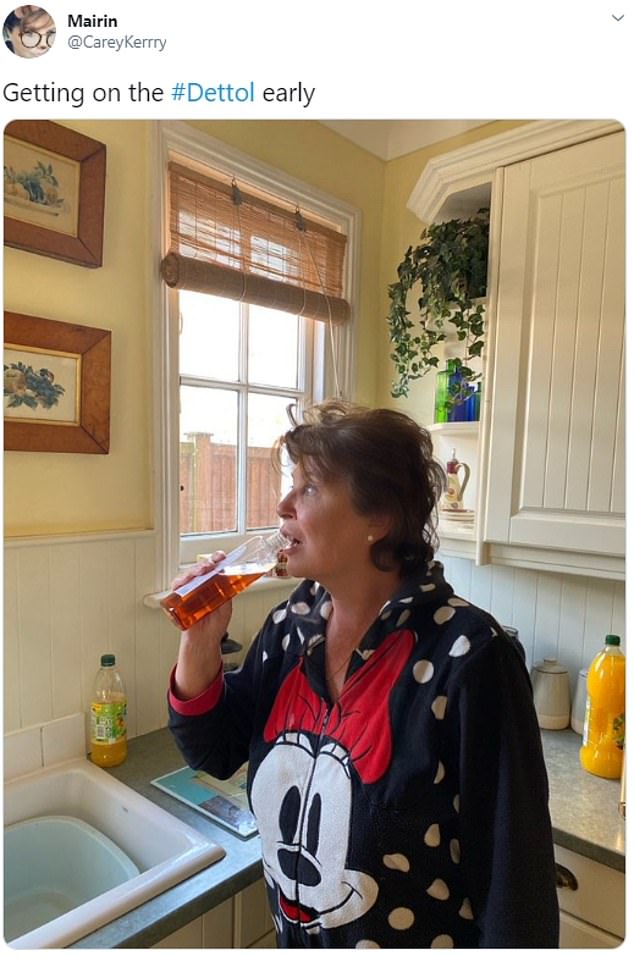 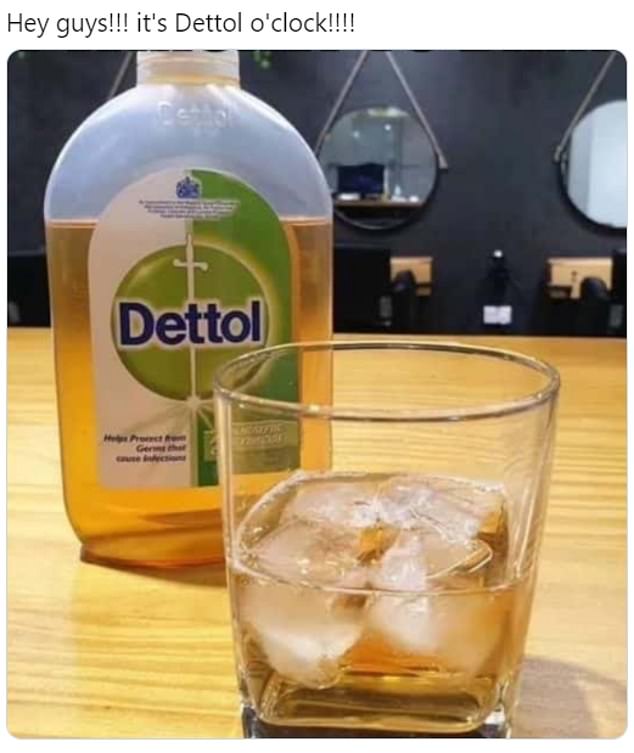 A third showed a glass filled with Dettol antiseptic liquid and an ice cube, with the caption, ‘Hey guys!!! It’s Dettol o’clock!!!’

Pretending to be Trump, they wrote: ‘Once I’ve pumped you full of disinfectant, I’ll zap you with this UV torch until you’re cured.

‘As a bonus you’ll end up with a glowing complexion like mine.’

And in a caption above the meme, they added: ‘You’re in good hands with sunlight, Dettol and Trump M.D. on your case!’

Another showed a woman pretending to swig from a bottle of Dettol. In a caption she wrote, ‘Getting on the #Dettol early.’

A third portrayed Trump as the new face of adverts for cleaning product Cillit Bang.

‘I hear Cillit Bang have a new advert. It’s so much better than Dettol and Domestos,’ they wrote.

Next to the image, a strap line from Trump read, ‘I’m Donald Trump, bang and the coronavirus is gone!’.

And a fourth showed a glass filled with Dettol antiseptic liquid and an ice cube, with the caption, ‘Hey guys!!! It’s Dettol o’clock!!!’ 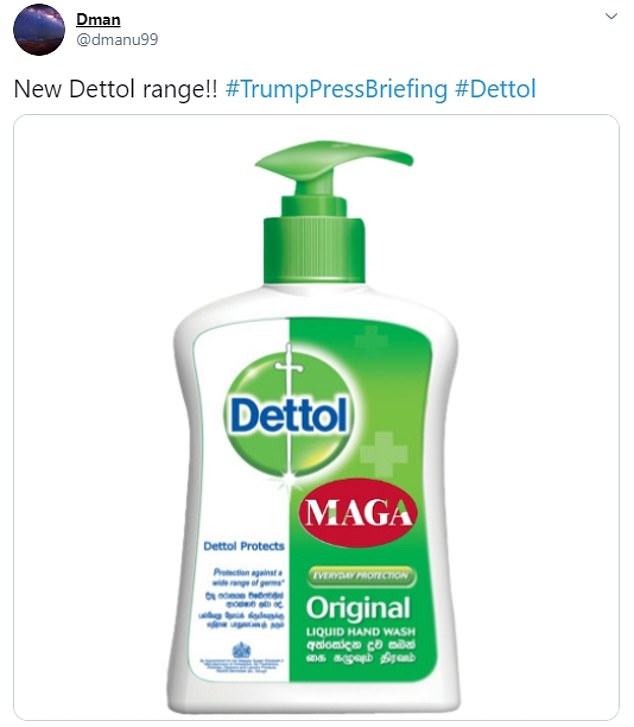 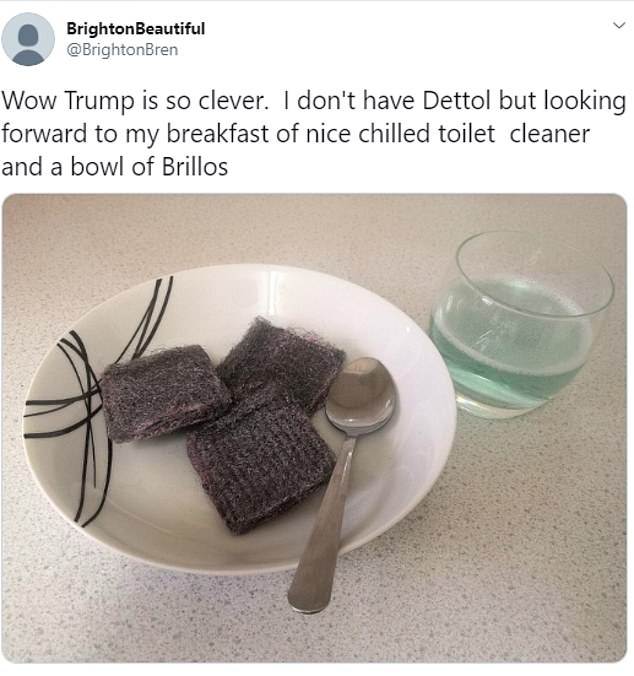 One Twitter user wrote: ‘Wow Trump is so clever. I don’t have Dettol but looking forward to my breakfast of nice chilled toilet cleaner and a bowl of Brillos’ 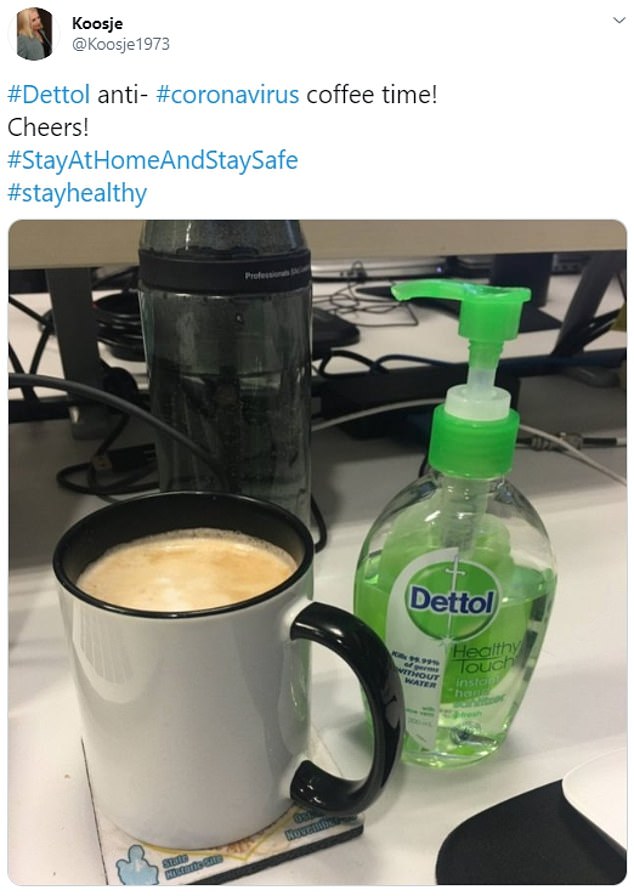 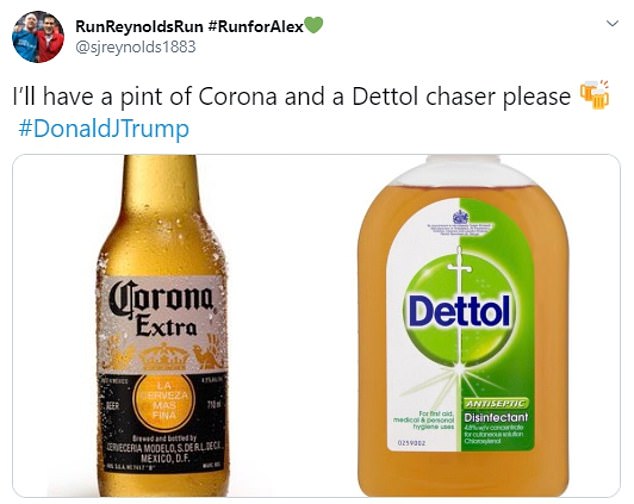 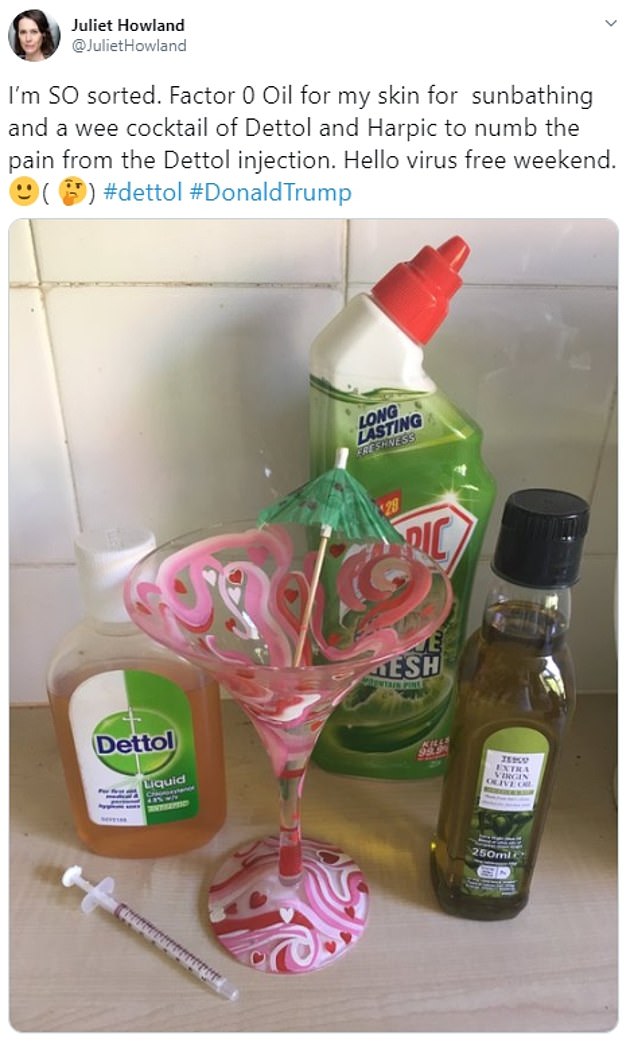 One Twitter user joked: ‘I’m SO sorted. Factor 0 oil for my skin  for sunbathing and a wee cocktail of Dettol and Harpic to numb the pain from the Dettol injection. Hello virus free weekend’

The ridicule kept coming on social media throughout the day Friday, as the president was likened to everyone from Marie Antoinette and Doctor Doolittle to cult leader Jim Jones in hilarious memes.

One person posted a meme featuring the iconic Marie Antoinette ‘Let them eat cake’ image with Trump’s face photoshopped over the top.

The cake has been swapped out for a bottle of Clorox, with the line ‘Let them eat Clorox’ on the post.

In another Twitter post, one person made a play on Doctor Doolittle, dressing Trump up in medical gear and calling him ‘Doctor Knowlitte’ who can ‘talk to the idiots’ instead of the animals. 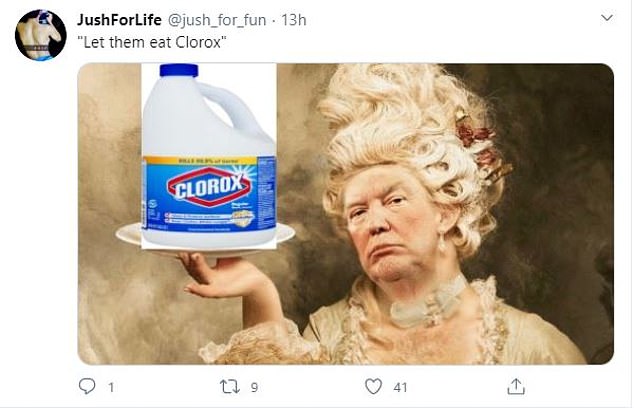 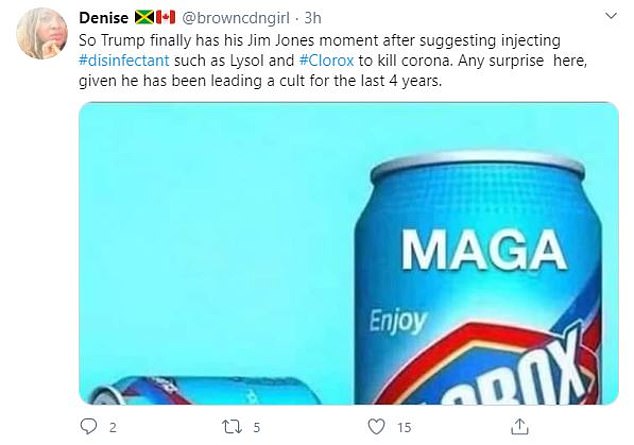 One person likened the president to Jim Jones, the cult leader who killed 909 when he ordered his followers to take part in a mass suicide by cyanide-poisoned Flavor Aid at his commune

Another person has photoshopped ‘Enjoy Clorox’ and ‘MAGA’ on the side of soda cans.

In the tweet, they liken the president to Jim Jones, the cult leader who killed 909 when he ordered his followers to take part in a mass suicide by cyanide-poisoned Flavor Aid at his commune in Guyana.

‘So Trump finally has his Jim Jones moment after suggesting injecting #disinfectant such as Lysol and #Clorox to kill corona. Any surprise here, given he has been leading a cult for the last 4 years,’ they tweeted.

Soda is just one type of food and drink given a makeover by baffled social media users.

Welch’s Fruit Snacks have also been given the Lysol treatment in one post, complete with the worrying stamp: ‘Trump and GOP approved.’ 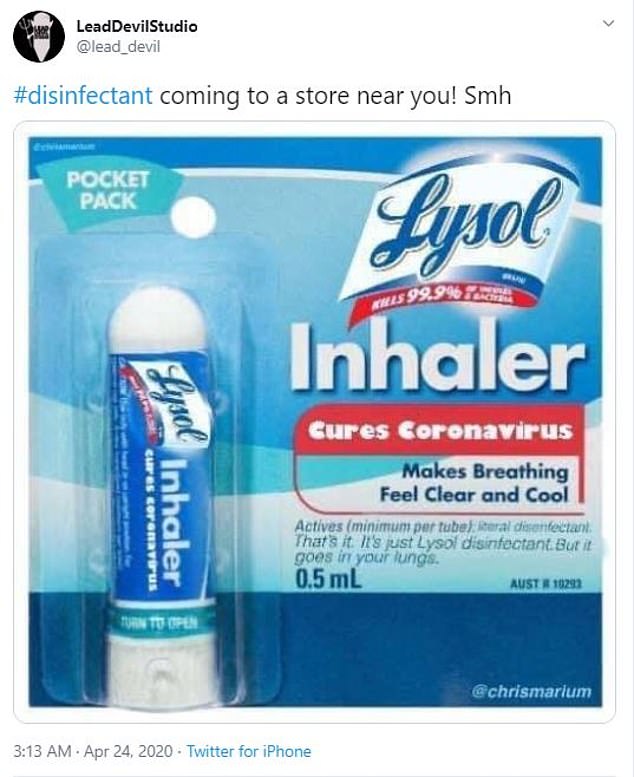 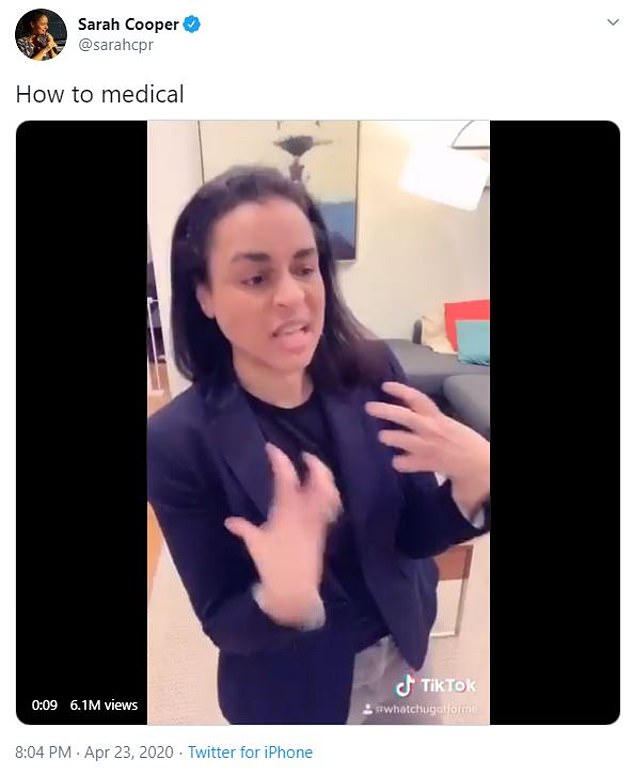 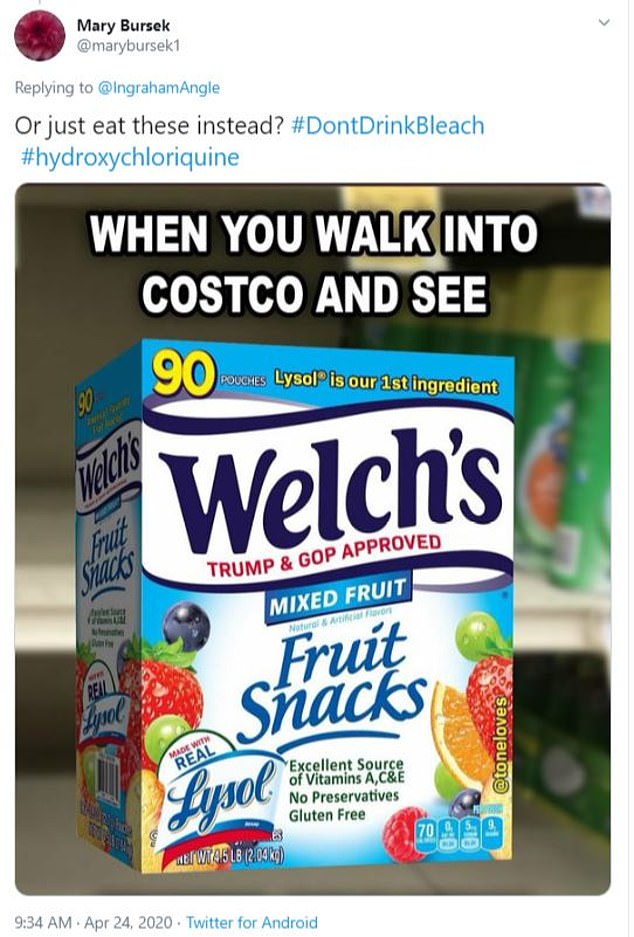 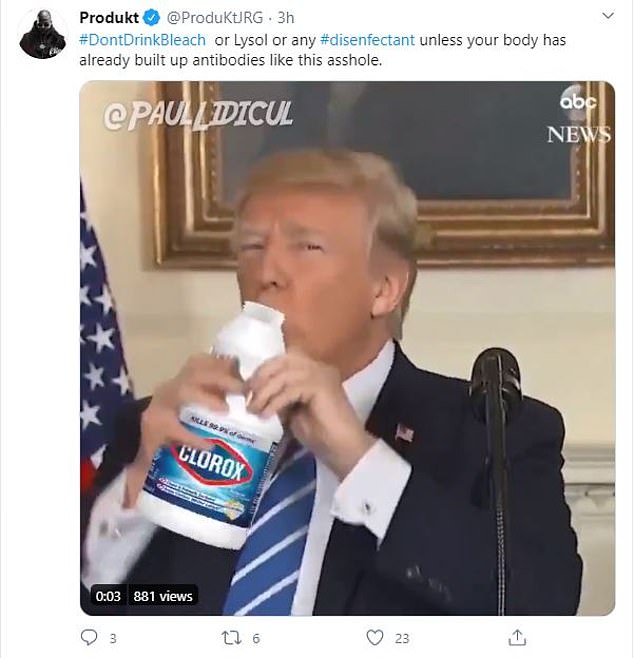 In another video, Trump is seen swigging from a bottle of Clorox

In another video, Trump is seen swigging from a bottle of Clorox with the caption ‘#DontDrinkBleach or Lysol or any #disenfectant unless your body has already built up antibodies like this a**hole.’

The mockery came after Trump’s ideas were lambasted by the medical community.

Pulmonologist Dr Vin Gupta warned the public on NBC News that Trump’s idea could have fatal consequences: ‘This notion of injecting or ingesting any type of cleansing product into the body is irresponsible and it’s dangerous.

‘It’s a common method that people utilise when they want to kill themselves.’

Speaking on Thursday evening, Trump asked Bryan: ‘Supposing we hit the body with a tremendous, whether it’s ultraviolet or just very powerful light? And I think you said, that hasn’t been checked but you’re going to test it.

‘And then I said supposing you brought the light inside the body which you can do either through the skin or in some other way. And I think you said you’re going to test that too. Sounds interesting,’ Trump said. 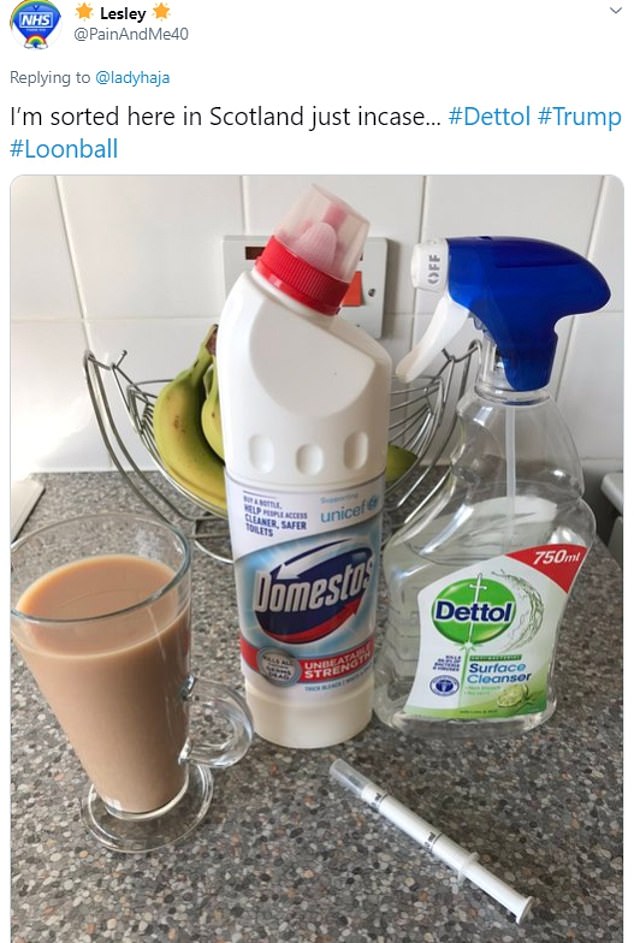 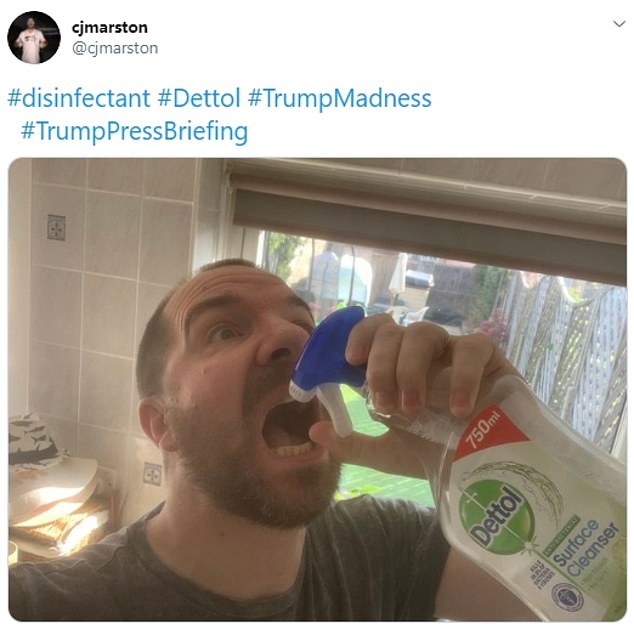 Another pretended to spray Dettol Surface Cleanser into their mouth

Then he raised another possible treatment. ‘And then I see the disinfectant, where it knocks it out in a minute, one minute, and is there a way we can do something like that?

‘By injection inside or almost a cleaning. As you see it gets in the lungs, and it does a tremendous number on the lungs.

‘So it would be interesting to check that,’ Trump said.

‘So that you’re going to have to use medical doctors. But it sounds interesting to me,’ he said. 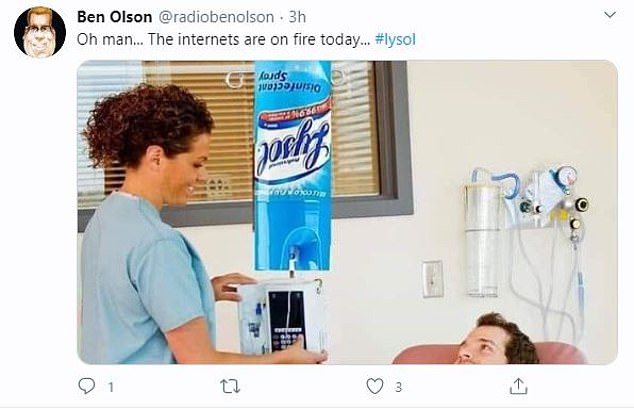 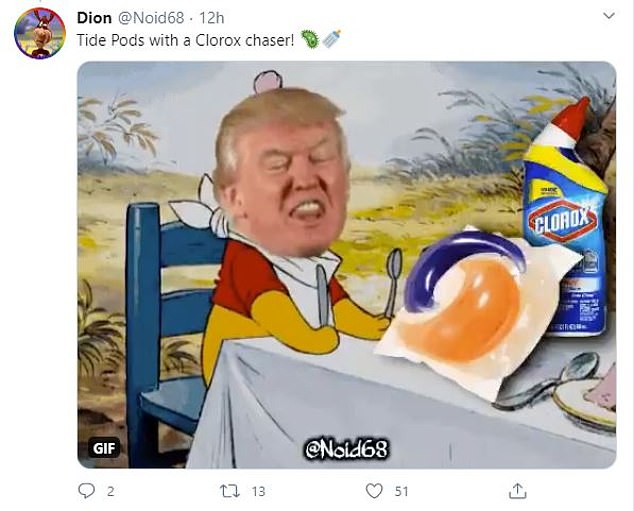 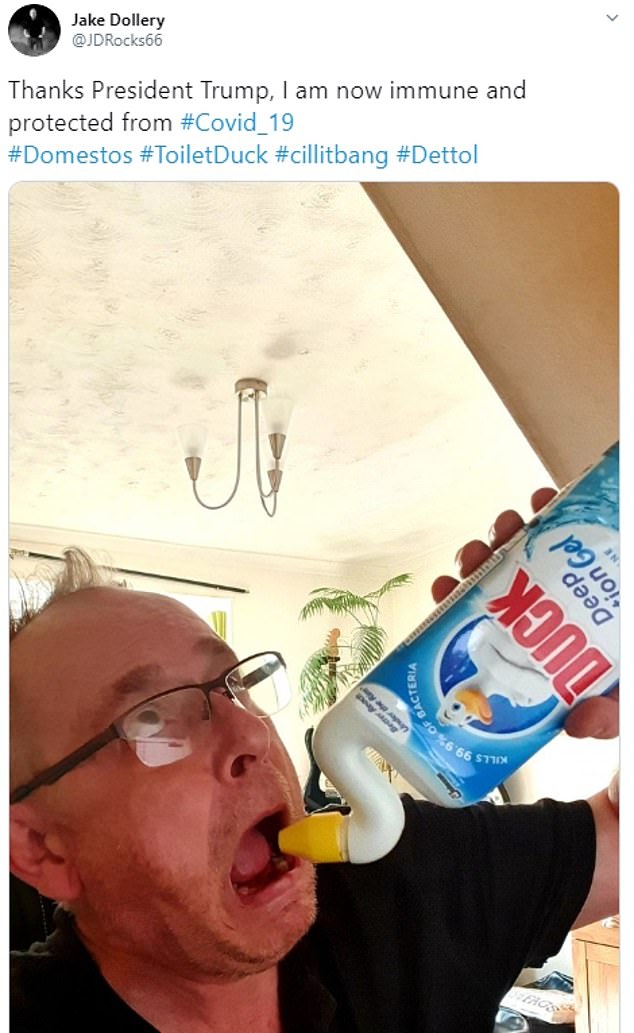 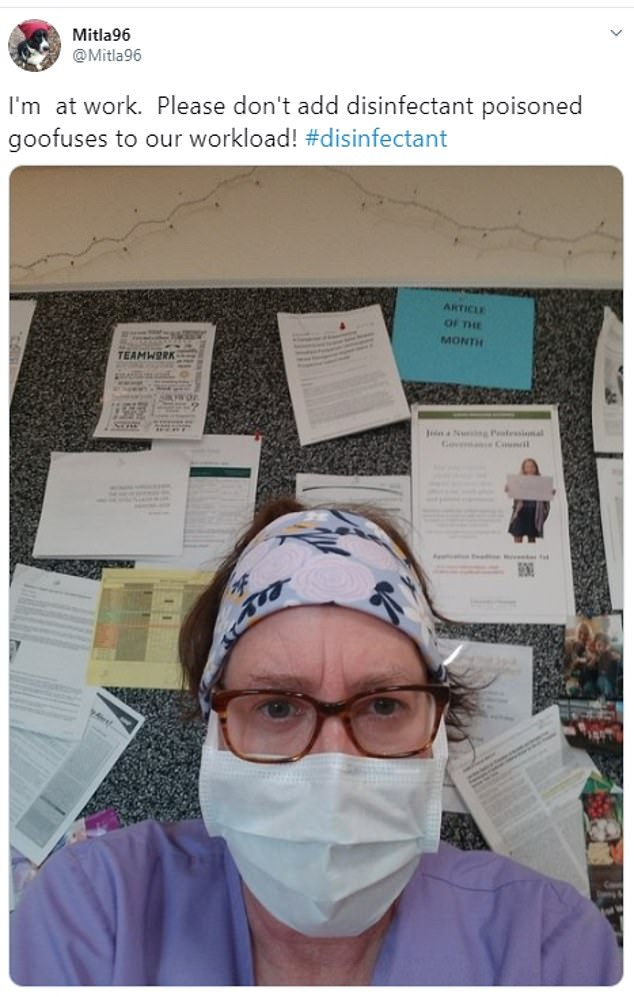 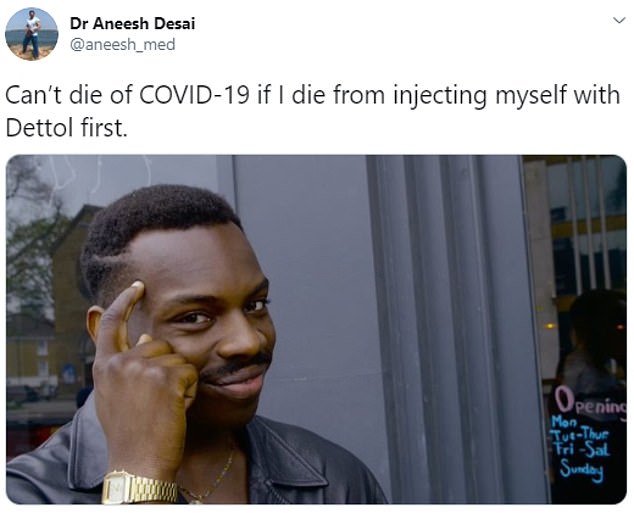 Agents that are commonly used to kill the virus in the environment, bleach and isopropyl alcohol, are both toxic to the body when ingested.

Trump, who noted he is not a doctor, did not guarantee results on his line of inquiry about a possible treatment.

‘So we’ll see. But the whole concept of the light, the way it kills it in one minute  –that’s pretty powerful,’ he said.

Hours after his briefing, disinfectant manufacturer RB, the company behind the Dettol and Lysol brands, urged people not to try injecting disinfectant. 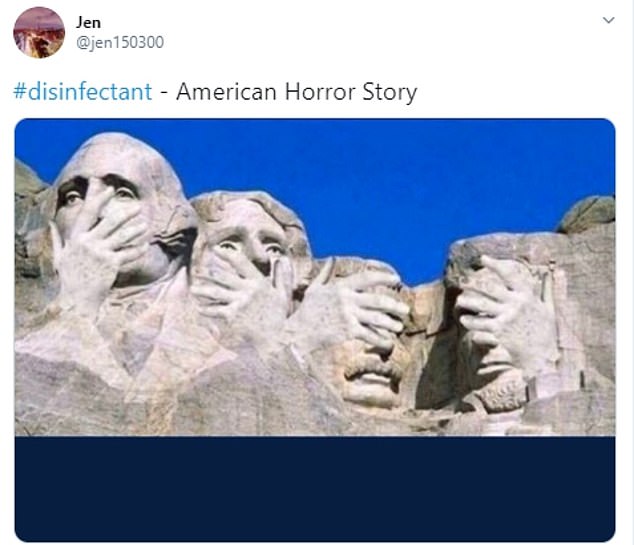 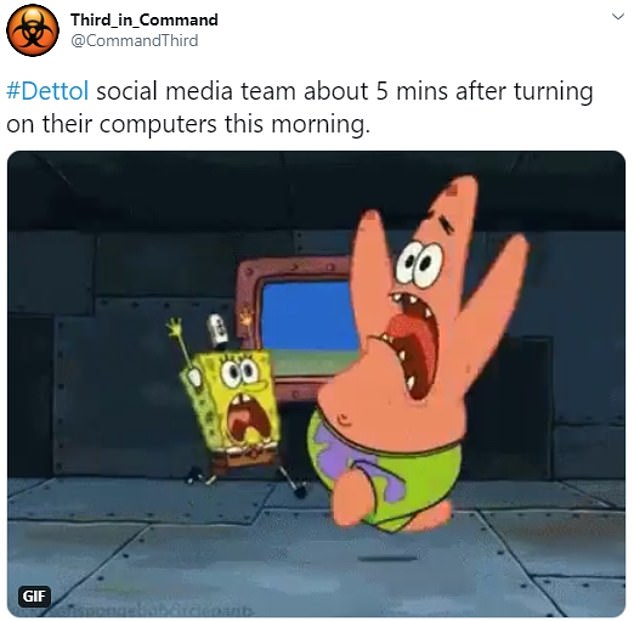 The company issued a statement saying: ‘Due to recent speculation and social media activity, RB has been asked whether internal administration of disinfectants may be appropriate for investigation or use as a treatment for coronavirus.

‘As a global leader in health and hygiene products, we must be clear that under no circumstance should our disinfectant products be administered into the human body (through injection, ingestion or any other route).’

It added that all its products should only be used as intended and according to usage guidelines.

In response to Trump’s comments, Mr Bryan said health officials were not considering such treatment.

The White House hit back Friday accusing the media of taking the president’s bizarre comments ‘out of context’ and sensationalizing them.

‘President Trump has repeatedly said that Americans should consult with medical doctors regarding coronavirus treatment, a point that he emphasized again during yesterday’s briefing,’ New White House Press Secretary Kayleigh McEnany said in a statement.

‘Leave it to the media to irresponsibly take President Trump out of context and run with negative headlines.’

WAS TRUMP TAKEN OUT OF CONTEXT? READ WHAT HE SAID AND MAKE YOUR OWN MIND UP

TRUMP: ‘Deborah, have you ever heard of that? The heat and the light, relative to certain viruses, yes, but relative to this virus?’

DR. DEBORAH BIRX: ‘Not as a treatment. I mean, certainly fever …’

DR. BIRX: ‘is a good thing. When you have a fever, it helps your body respond. But not as – I’ve not seen heat or (inaudible).’