Viewers of a solidly unflashy American TV business show might have thought they’d tuned in to the wrong channel last Friday. With a straight face, the anchor reported that bookmakers were offering odds of 100-1 that Meghan Markle would be elected US President in 2024.

Perhaps the item was intended as light relief amid the Covid gloom, yet after a short discussion, the anchor and his studio panellists seriously conceded that she was an unlikely but not impossible future occupant of the White House.

‘Perhaps the first Duchess to become President’ was the concluding thought, although nobody mentioned the technicality that holders of American public office are banned from using foreign titles. Still, it’s quite an idea. President Meghan. It’s surely no more unlikely than the story of how Ms Markle became a Duchess. And why should her talents not carry her further? Giving up her grand Royal handle might be a small price to pay for a shot at being the first female holder of the world’s most powerful office.

But there are other, less fanciful, reasons for the Sussexes to shed their Royal status, as we shall see. While the image of President Markle waving regally from the steps of Air Force One will appeal to the Duchess’s many devotees, the current reality of her life with the exiled ‘Call Me Harry’ is rather less glorious.

With a straight face, the anchor reported that bookmakers were offering odds of 100-1 that Meghan Markle would be elected US President in 2024

Consider. Whatever their long term ambitions – and, to be sure, President and First Laddie are probably not top of the list – their new life in the world capital of make-believe presents as many challenges as opportunities, not least financial.

Some hard-nosed forensic journalist-accountants have calculated an income of £20 million as the minimum the Sussexes will need to pull in every 12 months if they are to keep up celebrity-Royal appearances. The figure could easily be far more and, even if the analysis is wrong by half, that’s still an awful lot of elephant voice-overs.

Granted, the couple do have other potential income streams they might tap: there’s the Apple deal with Oprah, possible further work with Disney and a rich seam of endorsements and influencer deals to mine.

PLUS, is anybody surprised that they’ve co-operated with a book due out this summer with, no doubt, numerous dollar-spinning spin-offs? Collaborating with pliable authors and magazine journalists while shunning those deemed awkward is standard Royal practice, but for Harry and Meghan it’s not just about image – for them it’s business: a vital part of the self-branding and marketing process.

Yet here is the crux of the Sussexes’ dilemma: to rake in the necessary celebrity dosh they must leverage their Royal status to the maximum. After all, what else do they have to offer in exchange for the big cheques and star treatment? As their recent letter of complaint to British newspaper editors makes clear, their flight to LA has not induced them to drop an ounce of Royal haughtiness, as their hapless spokesman blared out their Royal titles in every paragraph.

The point couldn’t have been clearer: we don’t care about losing the HRH – all we, and our Hollywood best friends, want to put on the invitation cards is the Duke and Duchess bit. The trouble for Meghan and Harry is that this is a spectacularly bad time to trade on a fraying Royal connection.

It may have been years since the Royal Family had a real chance to do their job as the heart and soul of the kingdom but by God and by the grace of Covid they have it now.

Never in living memory (for most of her subjects) has the Queen better embodied the modest optimism and quiet resolve that define the best of British character. Her family in turn have played their part to justified acclaim, none more applauded than the relatable, telegenic and just plain decent Cambridges.

It seems an age ago that Meghan and Harry joined William and Catherine to form the ‘Fab Four’ of young Royal stars, whose charisma, approachability and fundraising potential seemed limitless. And so it might have been. It’s not yet time to explore why so many dreams came to grief, though let’s hope once normality returns there will be a discreet inquest into such a failure of Royal management.

Meanwhile, the inevitable revelations and bloodletting of the forthcoming court battles the Sussexes have launched against the most popular sections of British media may provide plenty of material for us to ponder.

Such considerations look out of place in a country – and world – still in a fight for its life against the cruel virus. Yet into this drama of survival Meghan and Harry have chosen to blunder with their petty tales of unhappiness and hurt feelings.

They and their celebrity publicists aren’t stupid. They can see that exile in Tinseltown is not a clever place from which to lecture the people they have abandoned on how to endure the worst crisis since the Second World War. They invite – and have duly received – much sarcastic mockery for their clumsy attempts to appear relevant from their luxurious lockdown in La-La-Land.

THEY must surely sense how out of touch, even borderline desperate, they appear. Yet – and here they may deserve sympathy – they have no alternative. They are currently in the audition of their lives, aspiring to be the toast of Hollywood. But they have chosen a pitiless spotlight – the here today, gone tomorrow favours of the world’s most ruthless chattering class. 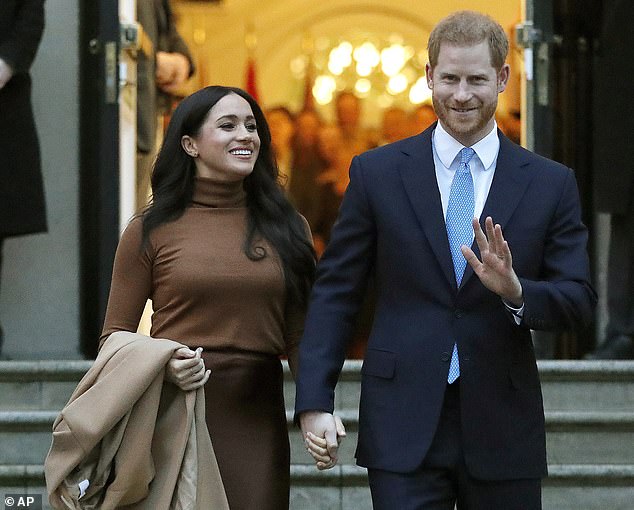 There are other, less fanciful, reasons for the Sussexes to shed their Royal status, as we shall see

Common sense – and decency – would compel the Sussexes to hunker down with their baby in the temporary comfort of a borrowed mansion and hope the rest of us wouldn’t notice their period of wise invisibility. But they dare not, because to be invisible and un-royal now is to fail the audition. And that, they simply can’t afford. So expect plenty more ham-fisted paparazzi photo opportunities as they dole out supplies to deserving Hollywood Covid sufferers; be ready for more insights on the British response to the pandemic from the poolside prince; stand by for more plaintive screeds on the iniquities of the British media. This is just the jam the Sussexes have got themselves into and, like so much else that has befallen them, it is of their own doing.

So if we wish them success in their new adventure in the world’s entertainment capital, we must help them cast off ties to the institution and country they seem to think they’ve outgrown. Now, surely, is the time to unburden them from the stress of being half-celebrity, half-toxic Royal.

Their attempts to ride on the coat-tails of the hard-working family they have abandoned do nobody any good. In April 2020, real royalty isn’t Instagramming from Malibu but working here, among crowded hospitals and deserted streets. This is where historic Royal titles are earned and re-earned, and this is where Harry and Meghan must leave theirs. For their own good – and for the good of the Crown they claim to serve.

Far better not to look back in anger but concentrate instead on thriving in their new surroundings. And what better ambition to set themselves than the White House. Long odds at 100-1?

Ms Markle may indeed now settle for the life of quiet privacy she and Harry have said they want. But don’t bet on it.