FTSE 100 rises 2.2% by 129 to 5,975 points as Asian and European markets rally on back of lockdown-easing measures – but oil prices continue to plunge

Share prices in London rose this afternoon as European markets rallied on the back of lockdown-easing measures – but oil prices continue to plunge.

The FTSE 100 index of Britain’s biggest firms was up by 2.2 per cent or 129 points to 5,976 this afternoon, having opened flat before rising later the morning.

It means the index is now closing in on the psychologically-important 6,000 barrier, a figure which it last finished above nearly two months ago on March 6.

It comes as BP said it slumped into a £3.5billion net loss in the first quarter as the pandemic crushed demand for oil.

US oil prices collapsed once again today to approach $10 per barrel, but equities rebounded as nations began to ease lockdowns, with some light at the end of the tunnel after weeks of volatility.

New York’s West Texas Intermediate oil dropped 21 per cent to $10.07 after a major US exchange-traded fund started selling its short-term contracts of the commodity.

Chris Beauchamp, an analyst at trading firm IG, said: ‘Equities are rallying and oil is crashing, so it must be another normal day in this topsy-turvy market.’

From Italy to New Zealand, governments announced the easing of restrictions, with Spain letting children play outside for the first time since mid-March.

PAST FORTNIGHT: The FTSE 100 has been mostly rising over the past fortnight since April 16

2020 SO FAR: The FTSE 100 index is now closing in on the psychologically-important 6,000 barrier, a figure which it last finished above nearly two months ago on March 6

However UK Prime Minister Boris Johnson said yesterday that it was too early to relax the lockdown in Britain, while New York state is not expected to reopen for weeks.

Some investors are hoping the worst may be over for the world economy as more countries allow businesses to re-open, but others see reasons to remain cautious, especially as a coronavirus vaccine has yet to be developed.

Commonwealth Bank of Australia said in a research note today: ‘We are less optimistic and expect a slower recovery in the world economy.

‘The risk of reintroducing restrictions is a risk to market participants’ optimistic outlook for a quick resumption of normal economic activity.’

All three major US stock averages advanced yesterday and are all now within 20 per cent of their record closing highs reached in February. 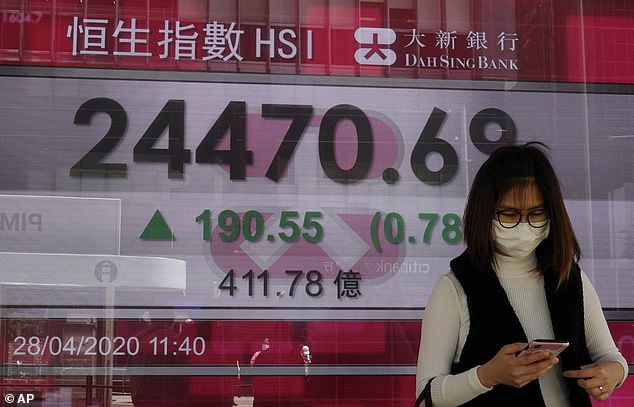 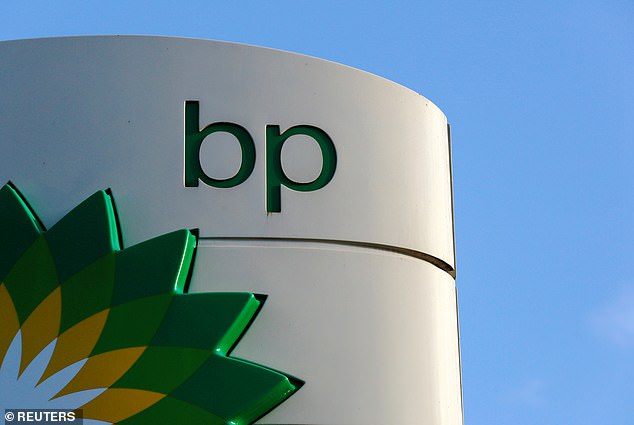 BP posted a £3.5billion net loss in the first quarter as the pandemic crushed demand for oil

The benchmark S&P 500 is on track for its best month since 1987, after trillions of stimulus dollars helped US equities claw back much of the ground lost since the coronavirus crisis brought the economy to a grinding halt.

Most Asian shares gained small ground overnight, with China rising 0.65 per cent and South Korea up 0.4 per cent – but Japan’s markets hardly changed.

The US dollar and the euro were little changed as traders refrained from taking big positions before a US Federal Reserve policy decision due tomorrow and a European Central Bank meeting on Thursday.

Meanwhile London-based BP’s first quarter profits tumbled by two-thirds as the crisis hammered oil demand and its debt rose sharply amid uncertainty ahead.

A spokesman said: ‘It is difficult to predict when current supply and demand imbalances will be resolved and what the ultimate impact of Covid-19 will be.’

It said oil and gas production faced ‘significant uncertainties’ linked to plunging oil prices and tumbling demand, as well as due to a deal between OPEC, Russia and other producers to cut global supplies of crude by about 10 per cent.

BP reported an underlying replacement cost profit, its definition of net income, of £643million, still beating the £571million forecast by analysts in a company-provided poll. The company reported a £1.9billion profit a year earlier.