Amazing footage shows a pod of dolphins ‘glowing’ as they swim through bioluminescent algae off the coast of California.

Photographer Patrick Coyne — who took the video off of the coast of Newport Beach, California — described the sight as one of the most ‘magical’ nights of his life.

The light show was caused by the dolphins disturbing the tiny organisms, which glow in a form of fear response.

Amazing footage shows a pod of dolphins ‘glowing’ as they swim through bioluminescent algae, pictured, off the coast of California

Mr Coyne was inspired to seek out the natural spectacle after watching dolphins swimming through bioluminescent waters in a programme on Netflix — and so went on an excursion with local tour agency Newport Coastal Adventure.

‘We were out for a few hours and on our final stretch back we finally had two dolphins pop up to start the incredible glowing show,’ Mr Coyne wrote on Instagram.

‘A few minutes later and we were greeted by a few more which was insane.’

‘I’m honestly still processing this all… ‘

According to Mr Coyne, the footage was challenging to film and required the perfect conditions — with bioluminescence being both difficult to spot and inherently short-lived in nature.

The glowing effect, often referred to as ‘the fire of the sea’, is produced by microscopic, single-celled organisms known as dinoflagellates, specifically those of the species Noctiluca scintillans.

The tiny creatures produce two chemicals — luciferin and luciferase, and enzyme. When combined, the enzyme catalyses a reaction on the luciferin — resulting in a signature blue flash that lasts up to around 100 milliseconds. 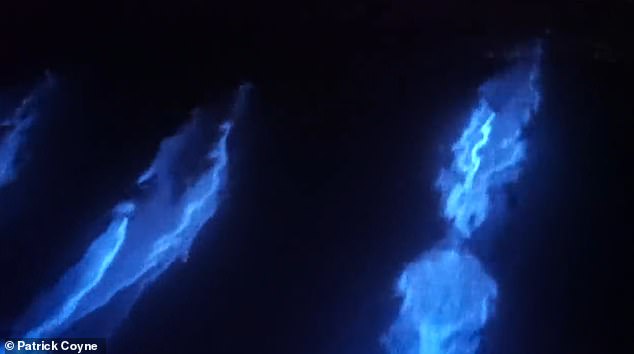 ‘When startled these single-celled algae eject two chemicals from their body that create light,’ commented ecologist Rebecca Helm of the University of North Carolina, Asheville.

‘So it’s definitely an OMG response,’ she added. 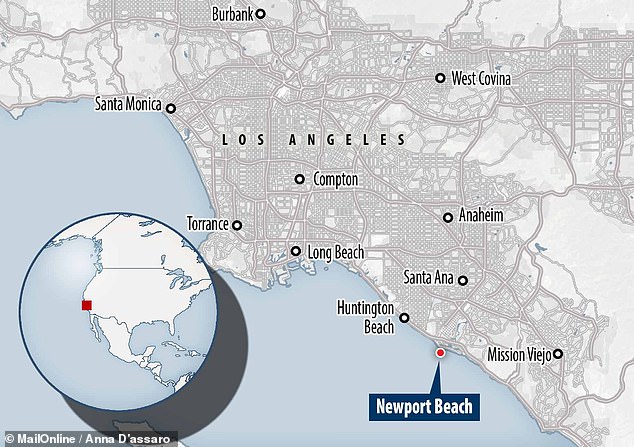 Photographer Patrick Coyne — who took the video off of the coast of Newport Beach, California — described the sight as one of the most ‘magical’ nights of his life

‘THE FIRE OF THE SEA’ IS CAUSED BY A MICROSCOPIC ORGANISM

Commonly called the ‘sea sparkle’, ‘sea ghost’ or ‘fire of the sea’, Noctiluca scintillans is a microscopic single-celled organism.

They can appear as a red tide in the daytime but when disturbed, however, they glow bright blue.

In high enough numbers, this effect can even be detected by satellites orbiting the Earth.

This phenomenon is called the ‘milky seas effect’, or ‘mareel’ — as derived from the Old Norse for ‘sea fire’.

Each individual Noctiluca scintillans is around 0.02 inches (0.5 millimetres) in diameter and has a tentacle-like ‘flagellum’ that helps it eat plankton.

The microscopic creatures bob around in the water column, regulating their buoyancy in order to move up and down.

They are found widely distributed across the world’s oceans. 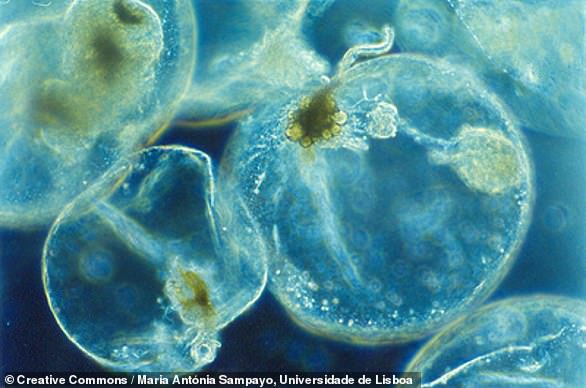 Pictured, Noctiluca scintillans as seen under a microscope