A heartbroken man has been denied a refund from a wedding video company after his fiancée died in a car crash, and has faced a cruel backlash from the business after he gave them a bad review online.

Copper Stallion Media accused grieving Justin Montney of starting a smear campaign against them and on a website they created to mock him, wrote ‘life’s a b***h’ as they refused to give back the $1,800.

Earlier this month the company took it a step further by writing in a Facebook post that they hoped Montrey cried throughout the day he would have married 22-year-old Alexis-Athena Wyatt.

Wyatt passed away when her Honda Fit was hit by a semi-trailer on February 4 on the Highway 24 in Colorado Springs. After Copper Stallion Media told Montney he would not get the money back and the decision was non-negotiable, he left a negative review on TheKnot.com but the page has now been taken down. 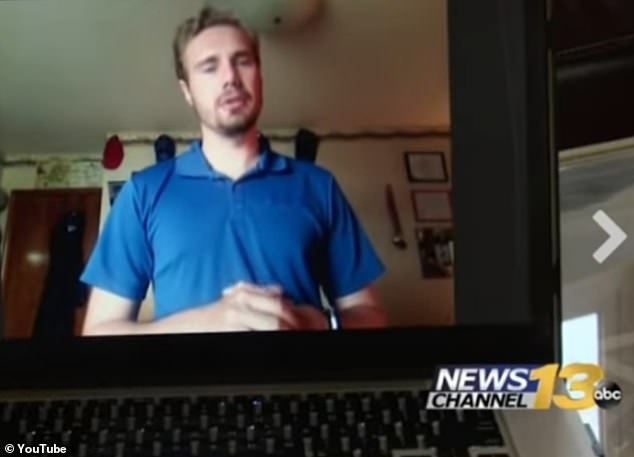 Montney asked for a wedding video deposit refund but Copper Stallion Media refused, so he wrote negative reviews and spoke to local media (pictured) about them 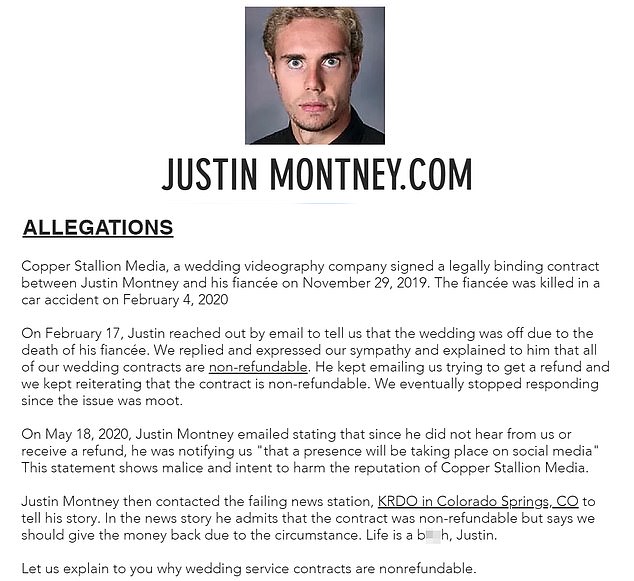 Copper Stallion Media received a flood of criticism and responded by creating websites about Montney. They wrote that Montney admits the contract was non-refundable and commented: ‘Life is a b***h, Justin’ 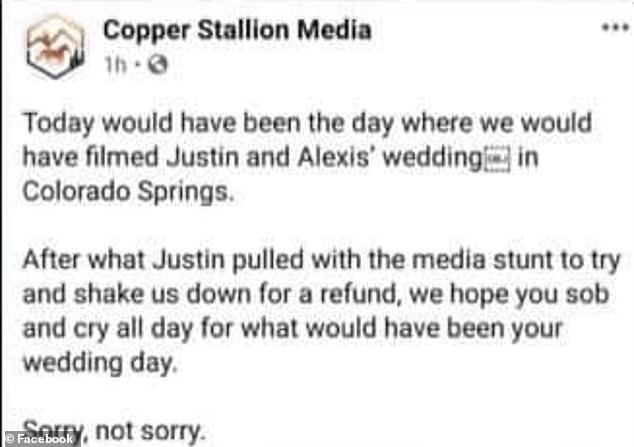 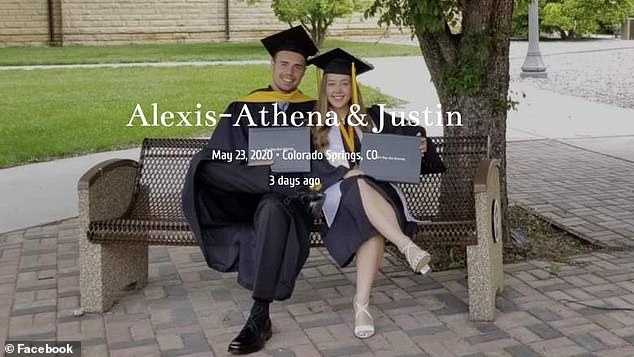 On May 23 they wrote about Montney on Facebook: ‘We hope you sob and cry all day for what would have been your wedding day’

In an interview with KRDO, Montney said Copper Stallion Media offered to put the money towards his next wedding, which ‘was a very a very insensitive thing to tell me.’

Montney believes they should have been able to refund the money ‘because they didn’t render any services’.

After the interview, people flooded the company’s online pages with criticism.

The company has not responded to attempts to contact them but it led to Copper Stallion Media redirecting its Yelp page and website to JustinMontney.com and JustinMontneyWedding.com where they mocked the grieving man in an effort to counter the bad publicity.

On the websites, text states that on February 17, ‘Justin reached out by email to tell us that the wedding was off due to the death of his fiancée’.

‘We replied and expressed our sympathy and explained to him that all of our wedding contracts are non-refundable,’ they wrote. ‘He kept emailing us trying to get a refund and we kept reiterating that the contract is non-refundable. We eventually stopped responding since the issue was moot.’ 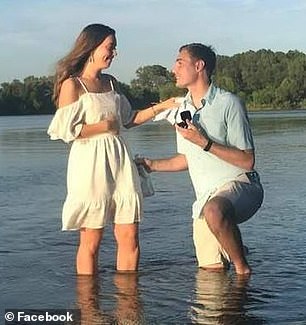 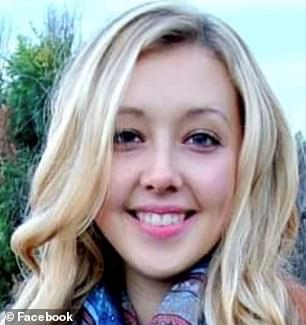 Montney said Copper Stallion Media offered to put the money towards his next wedding, which ‘was a very a very insensitive thing to tell me’. He is pictured left proposing to Wyatt

The company received lots of criticism after Montney shared his story. He is pictured left and right with Wyatt

The text continues: ‘On May 18, 2020, Justin Montney emailed stating that since he did not hear from us or receive a refund, he was notifying us “that a presence will be taking place on social media”. This statement shows malice and intent to harm the reputation of Copper Stallion Media.’

‘Since this smear campaign started, we have received numerous emails, phone calls and comments online (sic). We are documenting everything to build our case against Justin Montney. We have acquired this domain name for the next two years.’

‘It is not right that people can go online and trash a company.’

‘In the news story he admits that the contract was non-refundable but says we should give the money back due to the circumstance. Life is a b****, Justin.’

‘The contract was non-refundable. We will NEVER refund Justin Montney even with the online threats and harassment,’ the site adds. ‘If we knew he was going to shake us down, we would have charged a higher deposit.’

The company has since turn off the redirects but the website URL remain live.

At one point the company reportedly posted on social media appearing to link the suicide of one of their photographers to Montney’s complaints and subsequent negative publicity that arose from them. 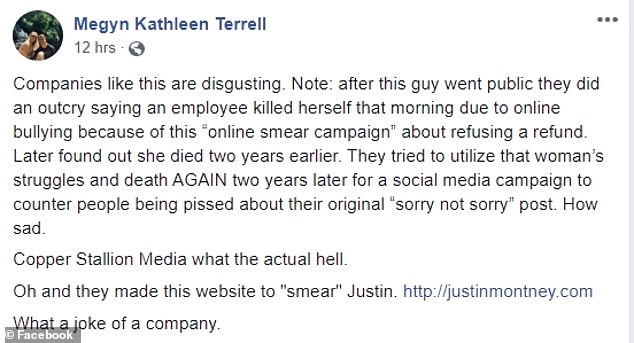 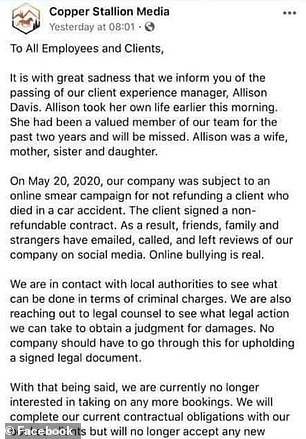 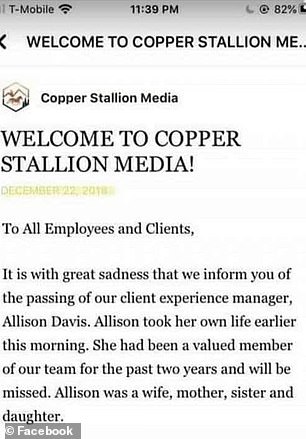 The company reportedly posted on social media appearing to link the suicide of one of their photographers to Montney’s complaints and subsequent negative publicity that arose from them. A social media user claimed that they had posted about the death of a woman with the same name two years ago

A social media user claimed that they had posted about the death of a woman with the same name two years ago.

‘It is with great sadness that we inform you of the passing of our client experience manager, Allison Davis. Allison took her own life earlier this morning. She had been a valued member of our team for the past two years and will be missed. Allison was a wife, mother, sister, and daughter.

‘On May 20, 2020, our company was subject to an online smear campaign for not refunding a client who died in a car accident. The client signed a non-refundable contract. As a result, friends, family, and strangers have emailed, called, and left reviews of our company on social media. Online bullying is real.

‘We are in contact with local authorities to see what can be done in terms of criminal charges. We are also reaching out to legal counsel to see what legal action we can take to obtain a judgment for damages. No company should have to go through this…’

Then in a May 23 Facebook post, Copper Stallion Media wrote: ‘Today would have been the day where we would have filmed Justin and Alexis’ wedding. After what Justin pulled with the media stunt to try and shake us down for a refund we hope you sob and cry all day for what would have been your wedding day.’ 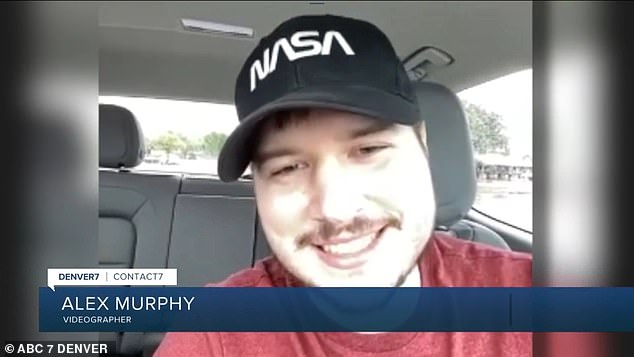 He finally got his last paycheck for the jobs after three months and said the payment came from a company named Organized Weddings LLC, which is based out of Las Vegas, Nevada and registered to Jesse J. Clark

A photographer who worked with Copper Stallion Media last year said he left after completing several jobs for them and having problems getting paid.

It remains unclear who is behind the company.

Alex Murphy said he found the company on Craigslist but never spoke to anyone over the phone.

He finally got his last paycheck for the jobs after three months and said the payment came from a company named Organized Weddings LLC, which is based out of Las Vegas, Nevada and registered to Jesse J. Clark.

ABC Denver 7 reports that Clark was sued in 2013 for taking money from 90 couples but not delivering wedding videography.

Whoever is in charge of Copper Stallion Media is confident enough that they can reset without any damages,’ Murphy commented.