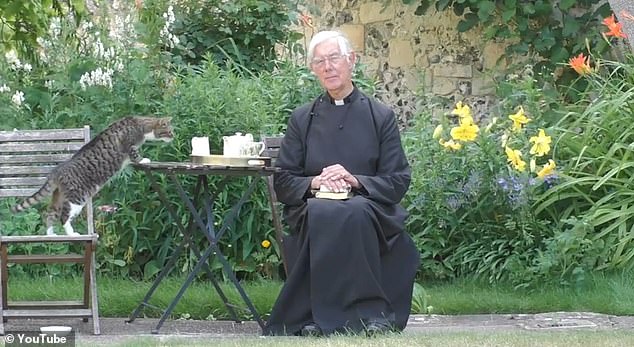 Cat that got the cream! Hilarious moment Tiger the cathedral moggy drinks the Dean of Canterbury’s milk while he livestreams morning prayers

By Luke Andrews For Mailonline

A cheeky cathedral cat stole the show when he decided to tuck into the Dean of Canterbury’s milk while he was live streaming morning prayers.

Tiger was seen hopping up onto a table before lapping up the milk as Dr Robert Willis, told viewers about the gospel of St Mark.

Noticing the furry visitor, the Dean gave him an affectionate stroke and said: ‘Sorry, we’ve acquired a friend this morning.’

It’s not the first time the Dean has been upstaged by one of the four Canterbury Cathedral cats.

In May, Tiger’s nephew, Leo, disappeared under the Dean’s robes during a morning prayer sermon. 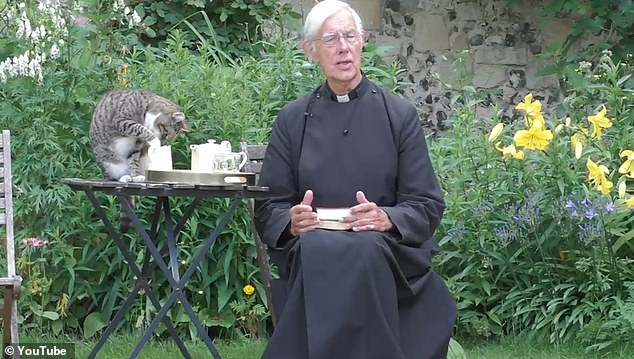 The Dean noticed the furry visitor and said: ‘Sorry, we’ve acquired a friend this morning’

In the livestream, filmed on July 2, Tiger is seen sauntering behind the Dean before leaping up onto a chair.

Glancing at the camera to make sure all eyes are on him, the cat then steps onto the table and makes a beeline for the milk jug.

‘The first of my Hymns, which went into the hymn book into Hymns Ancient and Modern…’, the Dean continues, apparently oblivious to the visitor.

Tiger, spotting his chance, then starts sticking his paws into the milk jug and licking them, as he indulges in the white stuff. 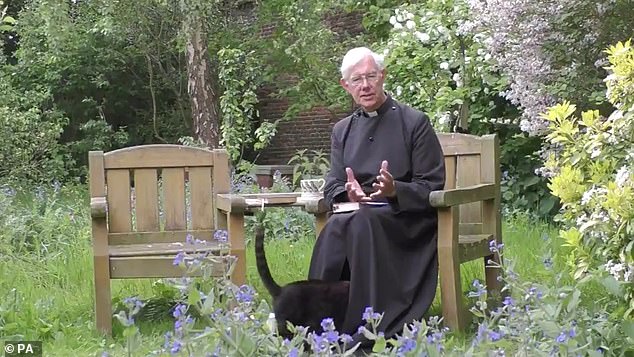 On May 26, Leo the cat was seen strolling into the Dean’s garden before walking into his robes as he told viewers about the bible.

A cathedral spokesman said Leo is ‘undoubtedly the comedian’ of the place of worship’s four cats.

‘He has been enjoying making our daily broadcasts since March and, while he would be happy to be in every one, we have tried to include the others to prevent them getting jealous.

‘With more than 20,000 visitors to the Deanery and its gardens each year – and more than 1.5 million to the cathedral – he is used to being on show and, having been born in the Deanery and growing up here, he is very used to company.’ 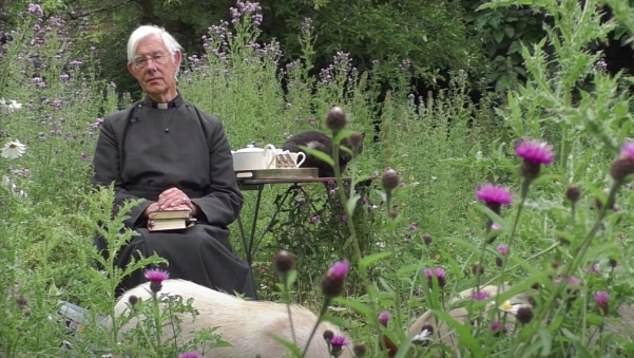 Pictured below are the Cathedral’s pigs Clemmie and Winston as they interrupt morning prayers along with one of the cathedral’s four cats. This happened on July 1

Canterbury Cathedral’s online services have proved very popular during lockdown with its Easter Day Eucharist racking up more than 11,000 views.

The cathedral re-opened to visitors on July 4, and for services of worship on July 5. However, those wishing to attend are required to book in advance.