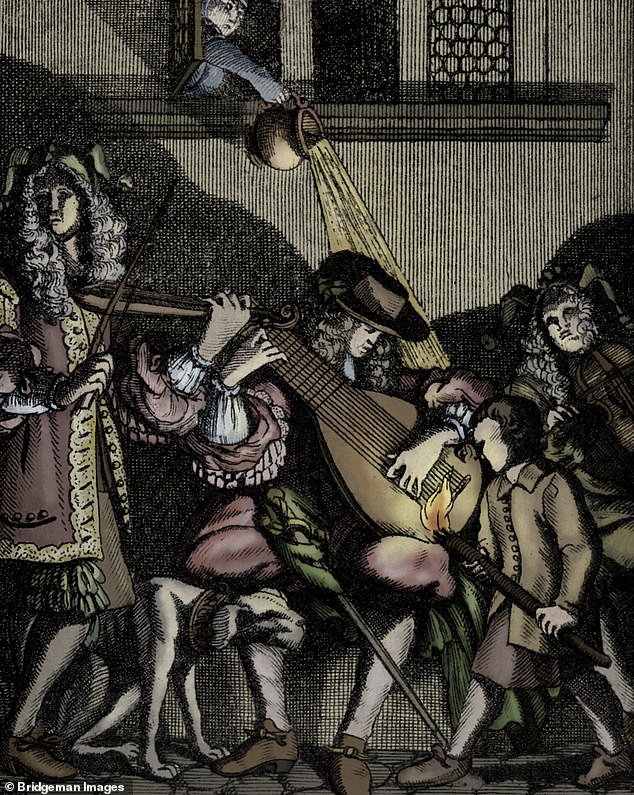 BOOK OF THE WEEK

Always excepting the odd tramp and the recent fad for beards, we are squeaky clean.

But as Robert Muchembled reminds us in this startling and gruesome book, things weren’t always so sweet-smelling. ‘The stench in centuries past was dreadful and omnipresent,’ he writes.

Robert Muchembled explores the cultural history of odours in a new book. Pictured: An 18th-century caricature shows a woman emptying her chamber pot over a musician

The graveyards overflowed with their contents when it rained. Potties were emptied out of windows — indeed people went to the toilet ‘wherever the need took them’, even squatting beside the table at wedding banquets.

Henry III of France gave audiences from his commode. At the Court of Louis XIII, ministers urinated on the tapestries, ‘in corners, on staircases and particularly in fireplaces’. If it may be argued that civilised society has developed, and ideas about good manners and respectability evolved as people ‘sought to suppress every trace of man’s animal nature’, then for a very long while we were quite bestial.

At Versailles in 1710, a princess revealed in a letter that the Royal Family enjoyed nothing more than a flatulence contest. But what this ‘putrid miasma’ and these ‘poisonous fumes’ led to — these fogs and sulphurous gases, and the towns no better than cesspools — was endemic ill health.

Rivers and canals were open sewers. Thatched roofs harboured vermin. People seldom washed because the body was believed to be porous, permeable to bad air. No one realised the link between dirt and bacteria, or cholera and contaminated water.

The Black Death, which killed more than a third of Europe’s population, was seen as the result not of flea bites but of ‘Satan’s poisonous breath corrupting the air’, like diabolic halitosis. 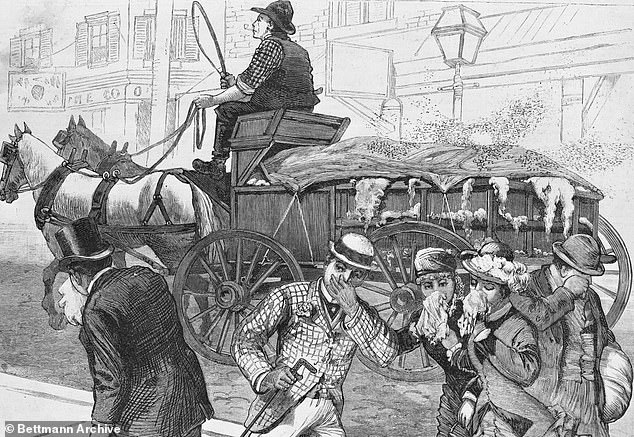 Rat dropping were being used to cure kidney stones in 1689 and dog mess was smeared on the neck for throat infections. Pictured: An illustration of a wagon hauling rancid lard

The solution was to devise a bigger stink to ward off contagion. ‘One foul smell drives out another,’ was the belief; ‘pestilence [is] dispelled by even worse fetid stenches’.In 1713, as a bracing ploy, a doctor recommended ‘sniffing a latrine every morning’.

Another tip to keep the plague at bay was to tether a billy-goat in the drawing room.

From about 1348, holding a pomander to the nostrils to ‘ward off evil forces’ became the fashion — the hollow silver bauble or box was stuffed with rose water, laurel leaves and vinegar. Churches and cathedrals started pumping incense about the place.

To visit the sick, medicine men in wide-brimmed hats armoured themselves with a suit of goat leather and a long-pointed mask filled with garlic. ‘No part of the body came into contact with the air.’ Social distancing was enforced by carrying a two-metre white pole or wand.

We can laugh at such crazy medical beliefs, at a time when everybody was doused in ‘powerful scents’, most of them nauseating. In 1689, rat droppings were used to cure kidney stones, and dog mess was smeared on the neck for throat infections. 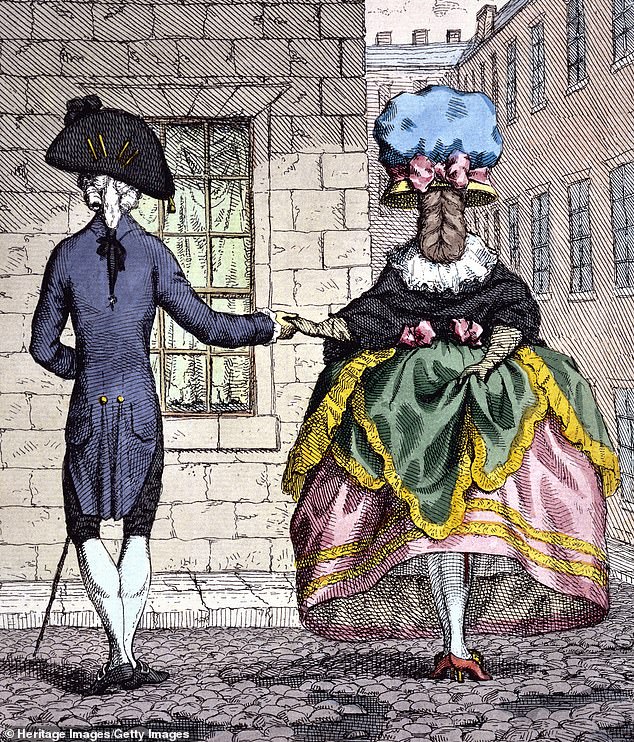 Women in the past tried to hold back the years with cosmetics that claimed urine and cowpats could disguise wrinkles. Pictured: Illustration crossing London’s dirty streets in 18th century

Urine and cowpats were used in cosmetics, to disguise wrinkles. Pork lard ‘whitens the face marvellously’. Fried bees cured baldness. Hanging a toad by one leg until dead and eating the pulverised remains was a secret of eternal youth.

Just like today, women in the past tried to hold back the years. Unfortunately, the products they rubbed on their cheeks and scalps to preserve a youthful appearance were toxic — take the lead and mercury in face powder, for example — and just as disfiguring as some modern plastic surgery.

The Church, for whom cleanliness was not always next to godliness (monks stank), thundered against the use of perfume and lipstick, believing that ‘paint marks out the adulterous woman’.

It thought floral and spice-based scents exacerbated ‘the insatiable sexual appetite of women’, who often clenched aromatic sachets between their breasts.

Perfume manufacturers, who began by creating what was hoped were ‘impenetrable olfactory barriers against infection’ and the pongs accompanying plague outbreaks, became the purveyors of scent meant purely for wellbeing and pleasure in the 18th and 19th centuries. 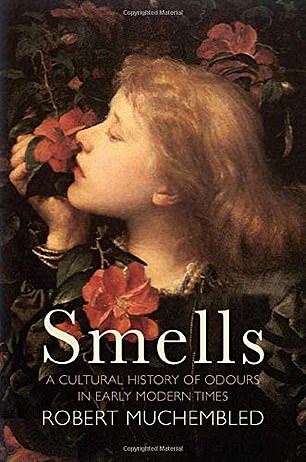 Cosmetics and nice smells were (and have remained) a big business. Animal products such as musk, civet and ambergris were mixed with jasmine, citrus fruits and lavender from Provence, plus cinnamon, nutmeg and sage from the East Indies.

There was an ‘olfactory revolution’, with distilleries full of cauldrons, mortars, kilns and boilers. The advertising industry and fashion magazines instructed and persuaded consumers to accept new ideas of eroticism. To wash became posh and alluring.

The cultural history of odours is fascinating, and impinges on much else.

Not reeking and ensuring neighbours and guests don’t retch is part of the ‘highly codified attitudes of politeness’, the protocols of table manners and distinctions of class.

The poor are still called ‘the great unwashed’, and handling cutlery correctly can be a minefield. Foreigners are often put down with racist remarks about their funny food smells.

Then there are lavatorial jokes and scatological material, which make up a big part of our humour — from Chaucer to the Carry On films and Rik Mayall’s Bottom.

It is my belief Brexit happened because we still don’t know what bidets are all about. When someone explained them to Kenneth Williams, he said it was surely easier to stand upside down in the shower.