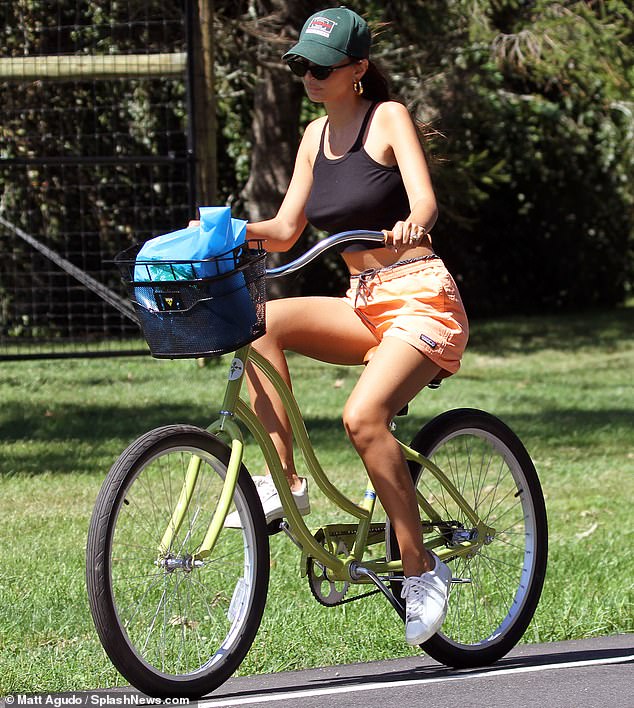 Emily Ratajkowski and her husband Sebastian Bear-McClard had an active weekend in The Hamptons where they have been quarantining since leaving Los Angeles earlier this summer.

On Monday, the 29-year-old model and swimwear designer and her 39-year-old producer husband were seen soaking up another day in the sun as they went for a leisurely bike ride.

The brunette stunner exuded an air of cool as she rocked a casual outfit that highlighted her phenomenal assets, as her husband biked behind.

Biker babe: Emily Ratajkowski, 29, showcases her model figure in a cropped t-shirt and shorts as she goes for a Hamptons bike ride with her producer husband of two years, Sebastian Bear-McClard, 39

Emily showcased her killer curves in a tight black crop top and a pair of orange athletic shorts. The tiny tank hit just above her belly button as she showed off her toned abs.

Perched forward on her green bike, the Inamorata designer put her long legs on display as she peddled through town with a to-go bag in her basket.

She opted for a pair of white sneakers for her ride as she completed her look with a  forest green baseball cap, stylish shades, and a pair of gold hoops.

Her stunning double-stone engagement glistened in the sun as she made her way around. 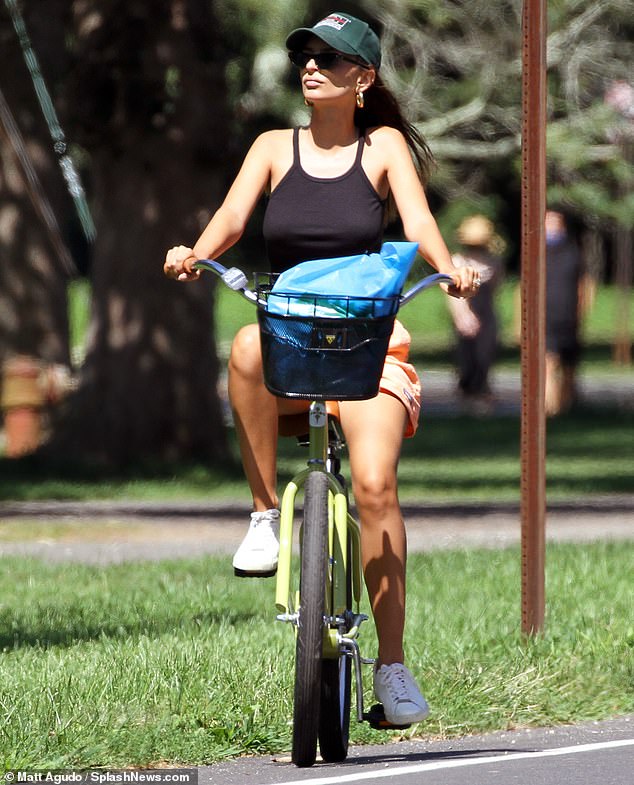 Legs for days: Perched forward on her green bike, the Inamorata designer put her long legs on display as she peddled through town with a to-go bag in her basket 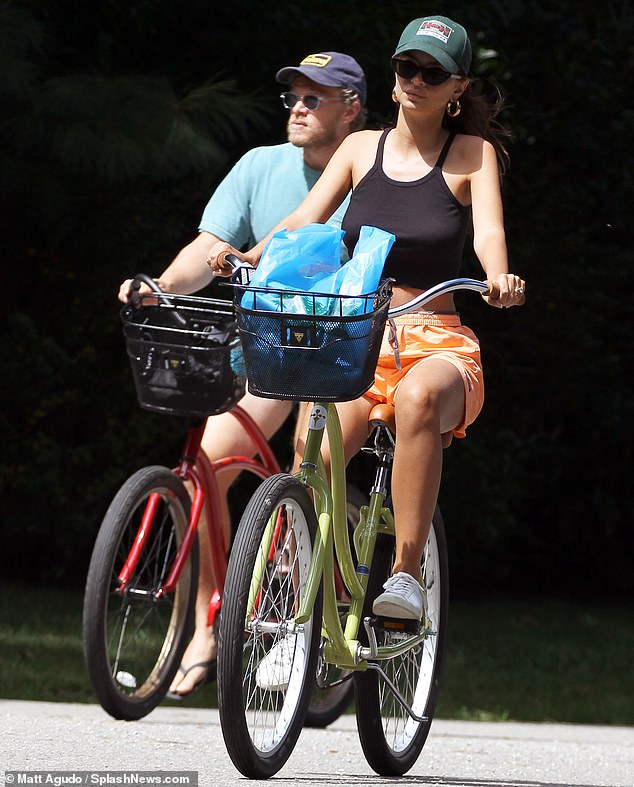 Simple pleasures: The pair have been married for two years after a surprise courthouse wedding in February 2018 where they were surrounded by a close group of friends like The Fat Jewish

Sebastian also cut a casual figure for the day wearing a blue T-shirt and shorts that he topped off a purple hat and some clear-framed sunglasses.

He chose to wear flip-flops for the relaxed activity as he took in the scenery during the ride.

The actress and model revealed to her Instagram on Friday that she would be gracing the cover of Vogue Italia for their September issue.

The magazine will feature 100 diverse covers of ‘ordinary’ people and notable models for an issue that celebrates individuality. She’ll be joined by fellow models like Bella Hadid and Kaia Gerber. 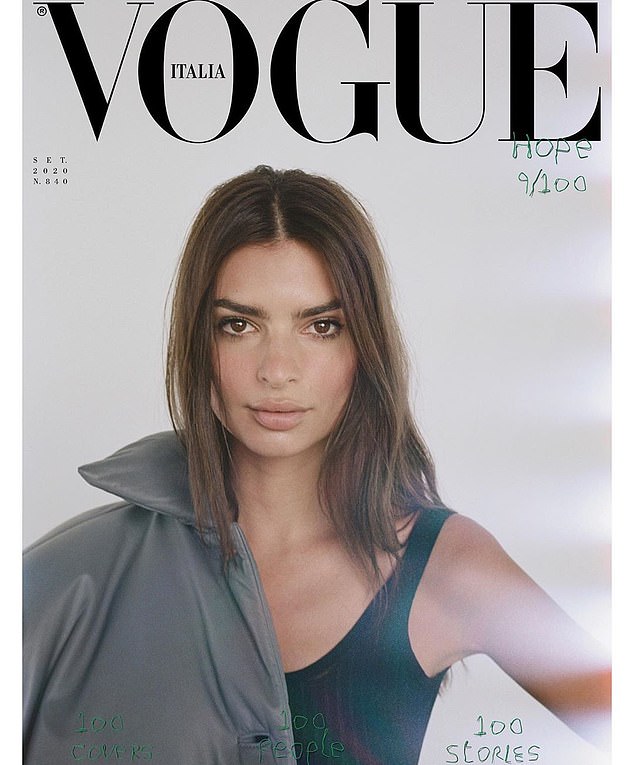 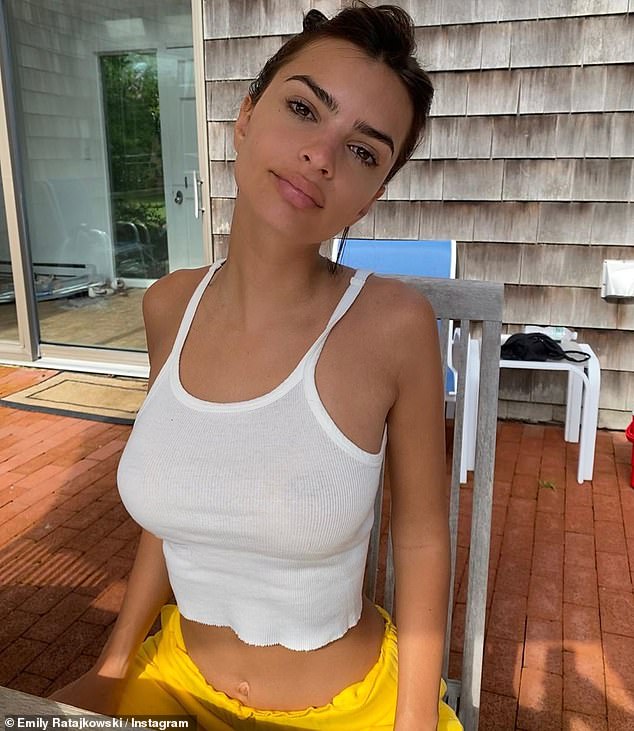 Inamorata:  Emily is expanding her swimsuit line into the athleisure space with the launch of sweatpants, as she continues to grow her ready-to-wear brand

Emily has spent the past few months of quarantine really focusing on expanding her ready-to-wear clothing line Inamorata into the athleisure space with the launch of sweatpants.

When she’s not working on her clothing line, the brunette bombshell and her husband have spent a lot of time frequenting the beach or riding their bikes around the upscale beach town.

The couple started off their quarantine in NYC before fleeing to their Los Angeles abode. After a couple weeks, the model and her Uncut Gems producer husband opted to split time between their city loft and a Hamptons property.

Emily and Sebastian have been married since February of 2018. Though the courthouse wedding came as a shock to most of her fans she had reportedly been vetting Sebastian for over a year before the pair took things to the next level. 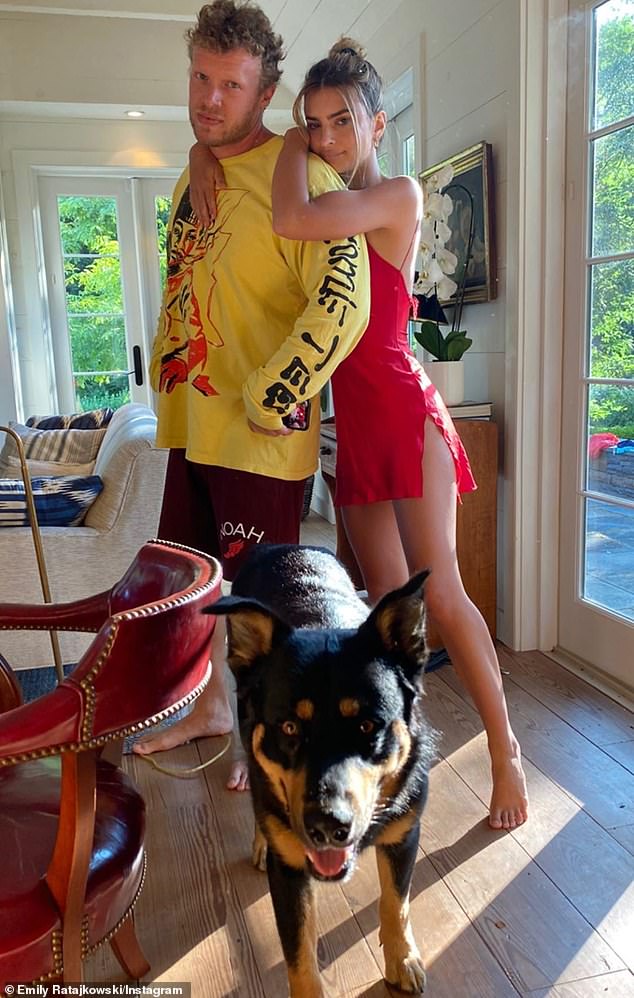 Family of three: Emily and Sebastian at their Los Angeles home with their dog Colombo; Spring 2020