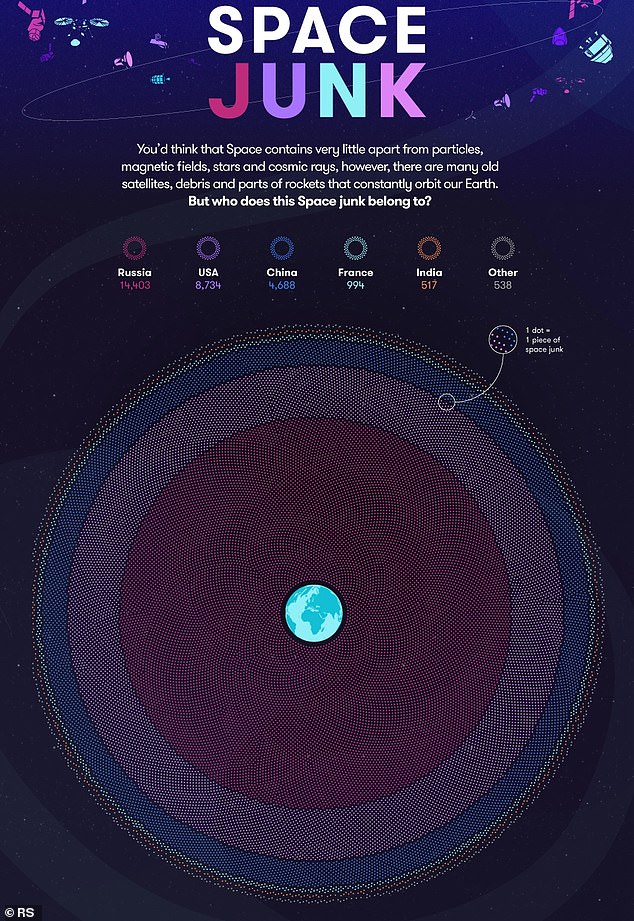 Space debris — detritus orbiting Earth from satellites — is a growing problem which threatens the future of human space exploration.

To tackle this issue, the Business Secretary Alok Sharma has announced £1million in funding, via the UK Space Agency (UKSA), for seven space-cleaning programmes.

Astronomers are concerned that high-value craft in low-Earth orbit, such as the International Space Station (ISS), could be destroyed by a rogue piece of debris.

Currently, there is no way of accurately monitoring and tracking small pieces of debris which could be hurtling towards a multi-million pound satellite.

This infographic reveals which countries owns the most space debris. It reveals Russia is responsible for 14,403 pieces and the US comes in second with 8,734

Working on photonic technologies to spot items in orbit and tell if they are junk or satellite.

This project focuses on the design, prototyping and demonstration of a Low-Cost Low-Earth Orbit Optical Surveillance Sensor.

A ’40×40 squared degrees one-eye’ prototype will be built.

In the final solution, ‘9 eyes’ will be combined.

Project will create an AI-powered algorithm that can differentiate between junk and actual satellites.

Tweak and repurpose existing sensors to spot and identify objects moving around a spacecraft.

Fujitsu and Amazon  will develop machine-learning methods to integrate planning for space debris into existing missions.

Mr Sharma said this will improve the commercial viability of missions that seek to remove debris.

It is believed there are around 160million pieces of debris floating around Earth, trapped in our planet’s gravity and travelling at 18,000mph.

Of these, almost one million are believed to be larger than 1cm. If one of these were to collide with a satellite the damage would be devastating.

Not only would it destroy the craft, it would likely set off a chain reaction, seeing innumerable satellites knocked out of action.

This would have catastrophic implications for life on Earth, as modern society relies on satellite services for GPS, mobile communications and weather forecasting.

‘Millions of pieces of space junk orbiting the earth present a significant threat to UK satellite systems which provide the vital services that we all take for granted – from mobile communications to weather forecasting,’ says Business Secretary Alok Sharma.

He told The Telegraph that action to clean up space must be taken now, before it is too late.

‘If we don’t take action now, low-Earth orbit could become too perilous for satellites or even humans on the International Space Station,’ he said.

Currently, there is no way to remove space debris, and only the biggest items in orbit can be spotted.

It is hoped the £1million funding will help make this possible from the UK.

It has been allocated to seven different projects, each with a unique pan to improve our understanding of our mucky orbit.

One project, dubbed ‘Life Me Off’, will create an AI-powered algorithm that can differentiate between junk and actual satellites.

Another, called Lumi Space, will use lasers to track and map the objects.

These seven made the cut from a total of 26 proposals, the UKSA says.

Graham Turnock, Chief Executive of the UK Space Agency said: ‘People probably do not realise just how cluttered space is.

‘You would never let a car drive down a motorway full of broken glass and wreckages, and yet this is what satellites and the Space Station have to navigate every day in their orbital lanes.

‘In this new age of space megaconstellations the UK has an unmissable opportunity to lead the way in monitoring and tackling this space junk.

‘This funding will help us grasp this opportunity and in doing so create sought after expertise and new high skill jobs across the country.’ 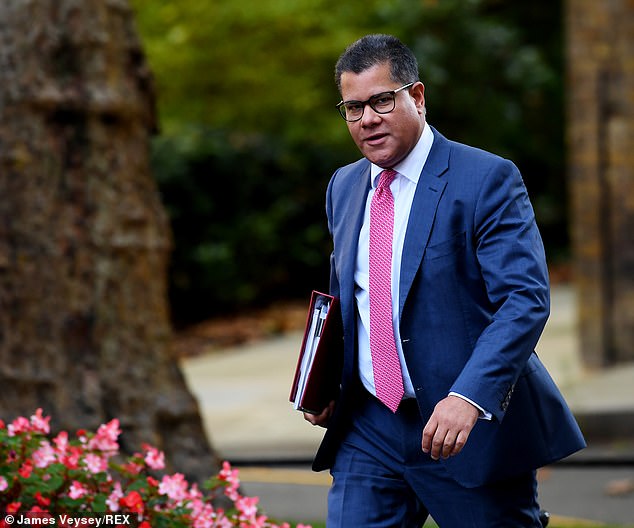 To tackle the issue of space debris, the Business Secretary Alok Sharma (pictured on Monday arriving in Downing Street)  has announced £1million in funding, via the UK Space Agency (UKSA), for seven space-cleaning programmes.

Swiss firm ClearSpace received the go-ahead from ESA for a £100million mission to build a space ‘tow truck’ designed to remove dead satellites from Earth’s orbit.

British engineers at aviation giant Airbus created a space harpoon that could help capture rogue satellites and pull them back down to Earth.

The 3ft (95 cm) missile would be fired from a ‘hunter-killer’ spacecraft, which would pull it – and its prey – back using a cord.

A Russian startup hopes a foam-spewing spacecraft that catches debris like a spider web and tosses them into Earth’s atmosphere to burn up could be the solution.

StartRocket is developing a ‘Foam Debris Catcher,’ which is a series of small and autonomous satellites that collects and de-orbits space junk using a sticky polymer foam.

WHAT IS SPACE JUNK? MORE THAN 170 MILLION PIECES OF DEAD SATELLITES, SPENT ROCKETS AND FLAKES OF PAINT POSE ‘THREAT’ TO SPACE INDUSTRY

There are an estimated 170 million pieces of so-called ‘space junk’ – left behind after missions that can be as big as spent rocket stages or as small as paint flakes – in orbit alongside some US$700 billion (£555bn) of space infrastructure.

But only 22,000 are tracked, and with the fragments able to travel at speeds above 16,777 mph (27,000kmh), even tiny pieces could seriously damage or destroy satellites.

However, traditional gripping methods don’t work in space, as suction cups do not function in a vacuum and temperatures are too cold for substances like tape and glue.

Grippers based around magnets are useless because most of the debris in orbit around Earth is not magnetic.

Around 500,000 pieces of human-made debris (artist’s impression) currently orbit our planet, made up of disused satellites, bits of spacecraft and spent rockets

Most proposed solutions, including debris harpoons, either require or cause forceful interaction with the debris, which could push those objects in unintended, unpredictable directions.

Scientists point to two events that have badly worsened the problem of space junk.

The first was in February 2009, when an Iridium telecoms satellite and Kosmos-2251, a Russian military satellite, accidentally collided.

The second was in January 2007, when China tested an anti-satellite weapon on an old Fengyun weather satellite.

One is low Earth orbit which is used by satnav satellites, the ISS, China’s manned missions and the Hubble telescope, among others.

The other is in geostationary orbit, and is used by communications, weather and surveillance satellites that must maintain a fixed position relative to Earth.