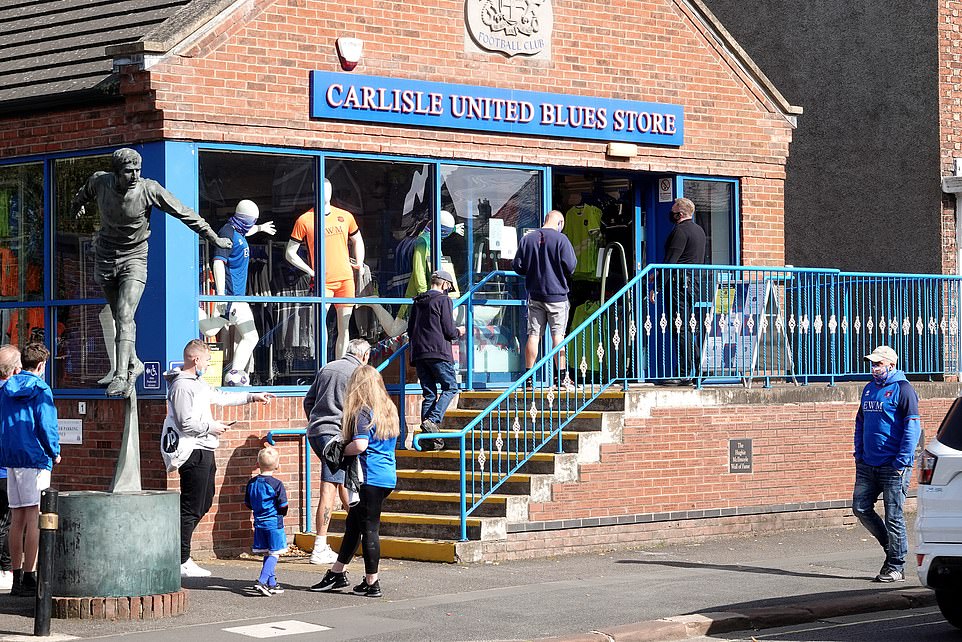 Football fans were marshalled into a brave new Covid-19 defying era today as the English Football League, tentatively, opened its doors for the first time during the pandemic.

Just 1,000 supporters were allowed into the game between Carlisle United and Southend United and each were warned to be in no doubt that any un-social distancing would lead to an early exit.

Such were the extent of coronavirus precautions, that fans were even told before the first kick-off the day by the intercom announcer to not return the match ball onto the field of play if it entered the seating areas as it ‘had to be dis-infected first’ to shield any virus danger from the players.

Carlisle United has allowed 1,000 supporters into its stadium, for the first time since March, to watch the match against Southend United 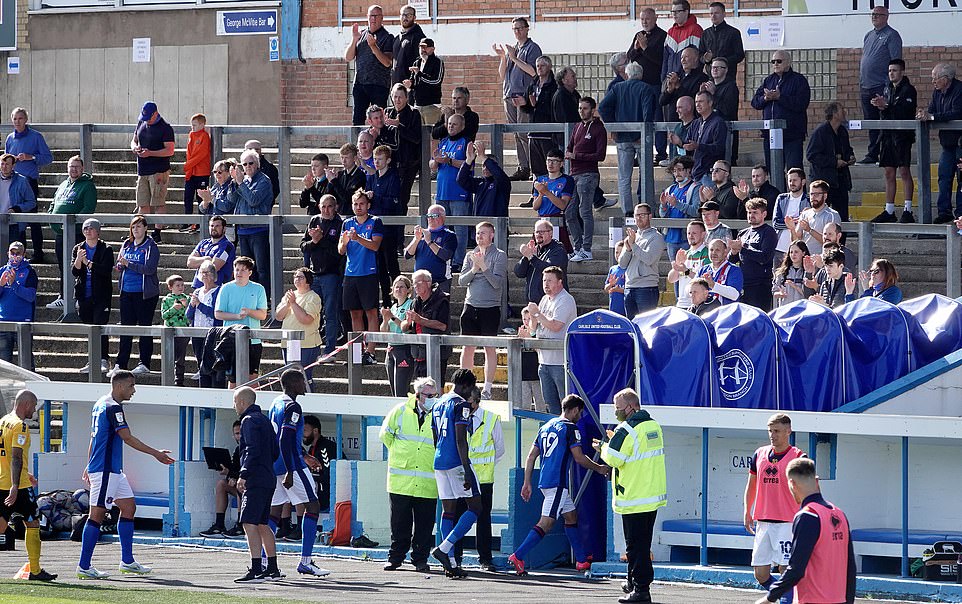 Fans haven’t been able to visit stadiums since the coronavirus lockdown in March, most professional football games are still being played in empty stadiums

The fans passed through the turnstiles for the first time since March as EFL chiefs warned the move was the first stage in a bid to stop clubs haemorrhaging more cash with a £50 million shortfall already registered and fears the total could reach £250 million by the time this soccer season is due to end next Spring.

Premier League chiefs were closely monitoring the decision by the lower leagues to allow limited supporter access to see if it could also herald a new dawn for fans of clubs such as champions Liverpool and close rivals Manchester City and get the tills ringing again.

Up to eight thousand fans at eight fixtures across the three divisions of the English Football League were welcomed back, but the move caused a backlash with furious supporters asking why it was safe to watch football but not to have social or family gatherings of more than six people.

But those lucky 1,000 home fans at Carlisle today could barely conceal their excitement and had shown their enthusiasm for today’s Covid-10 curtain-raiser by jamming the club’s telephones for hours when the partial re-opening was announced on Wednesday.

One fan, school teacher Heather Herring , 41, who with her husband Mark wore Carlisle team shirts, said: ‘It has been a very long six months without our football.

‘It is I suppose a first stage in returning to something like a normal life.

‘I know all the safety procedures because of being a school teacher, but I can see that there are no chances being taken here.’

Mr Herring added: ‘It is fantastic to be back. I spent nearly five hours holding onto the telephone to wait for my slot to buy the tickets. We really have got the golden tickets.’

Each of the 1,000 supporters – no Southend fans were invited to join the party – had their body temperatures taken and were asked to wear masks, keep a safe distance and to sanitise their hands regularly. 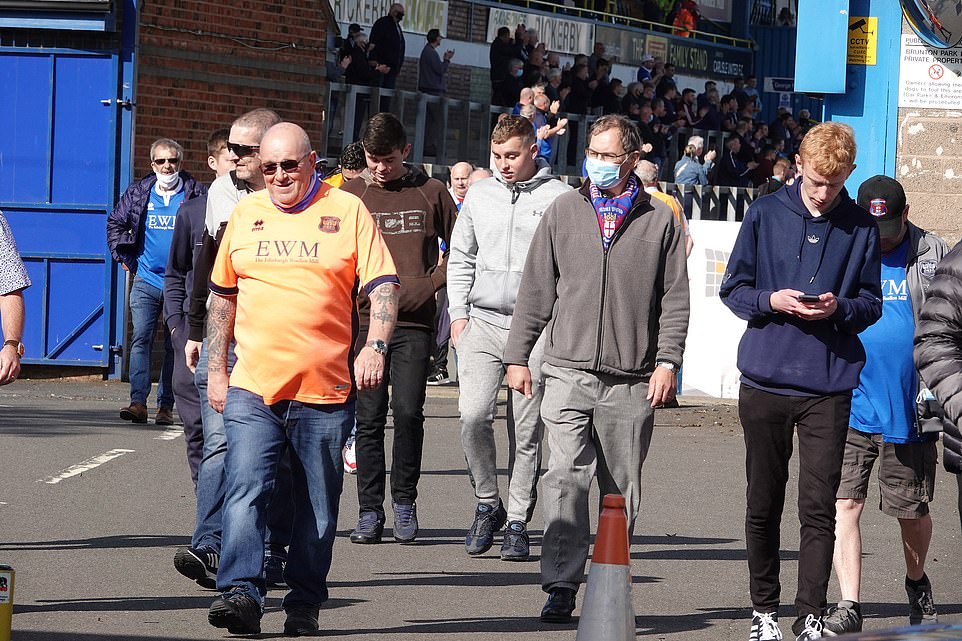 Carlisle United’s stadium was one of eight to allow 1,000 home supporters to watch from the stands today as part of a trial scheme 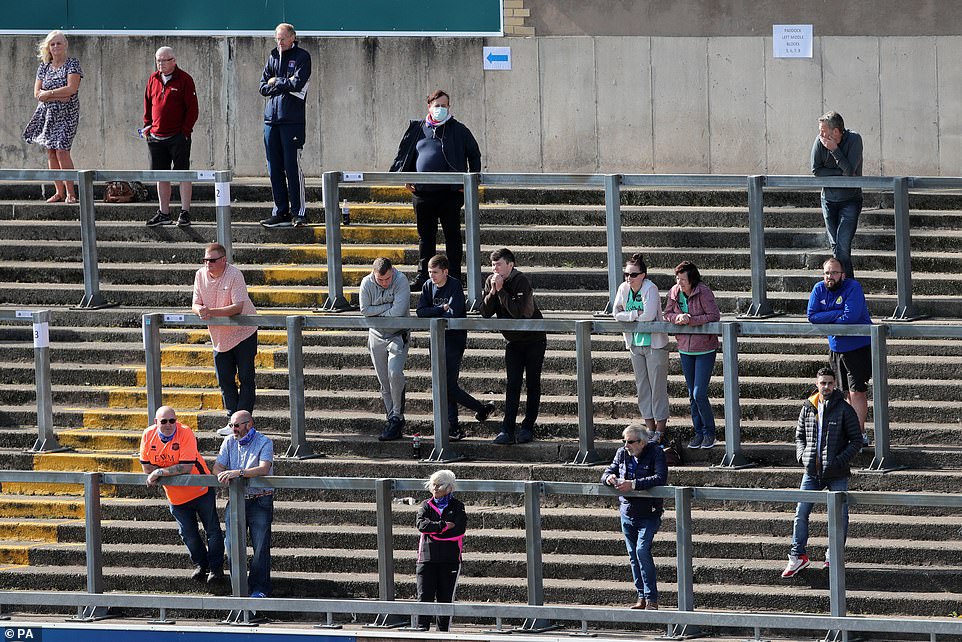 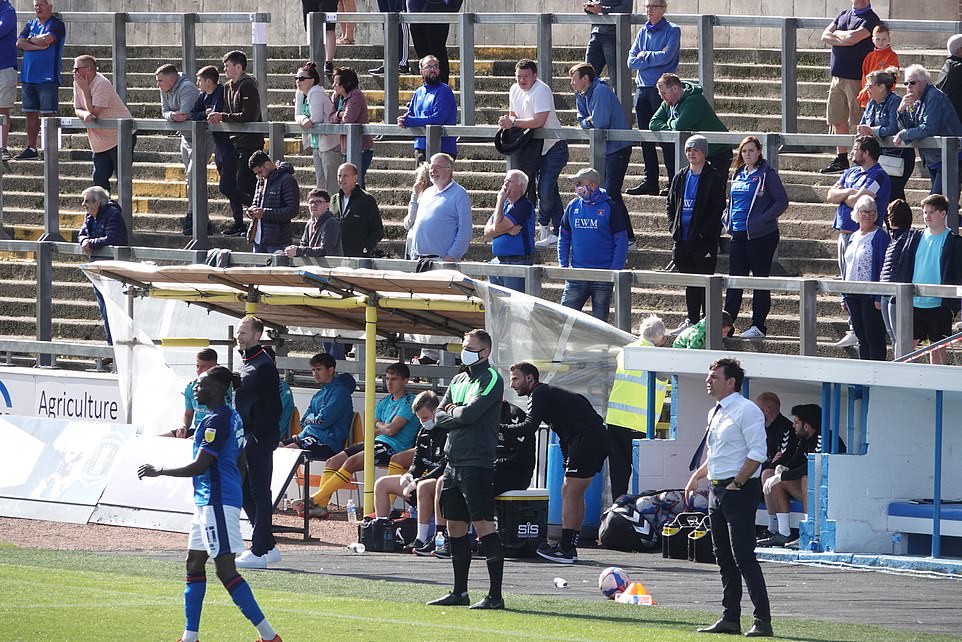 Each member of the crowd had their body temperatures taken and were asked to wear masks, keep a safe distance and to sanitise their hands regularly. 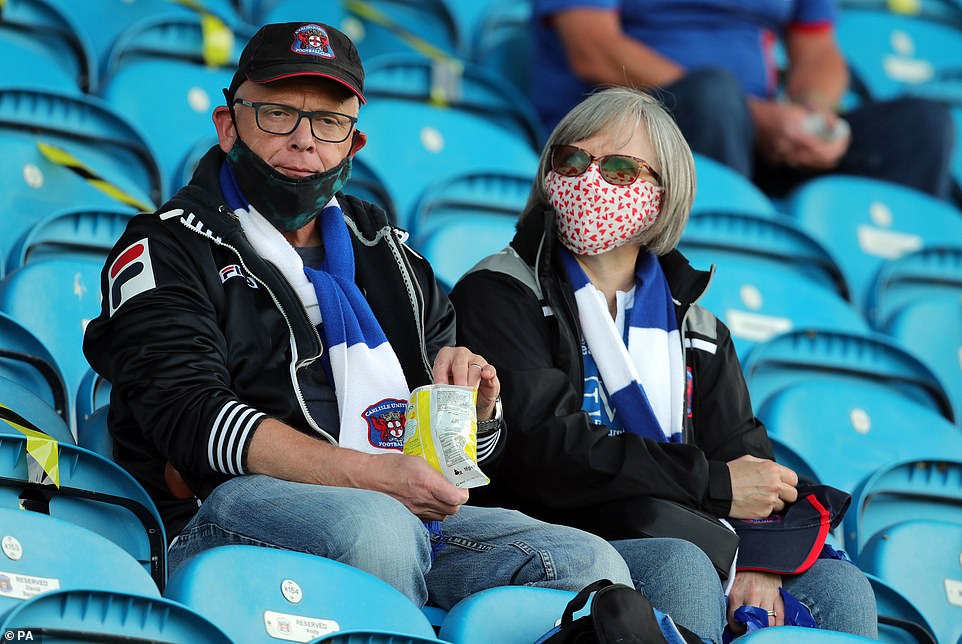 Carlisle United’s stadium has enough seats for more than 18,000 people, but today’s match saw a fraction of that in the stands 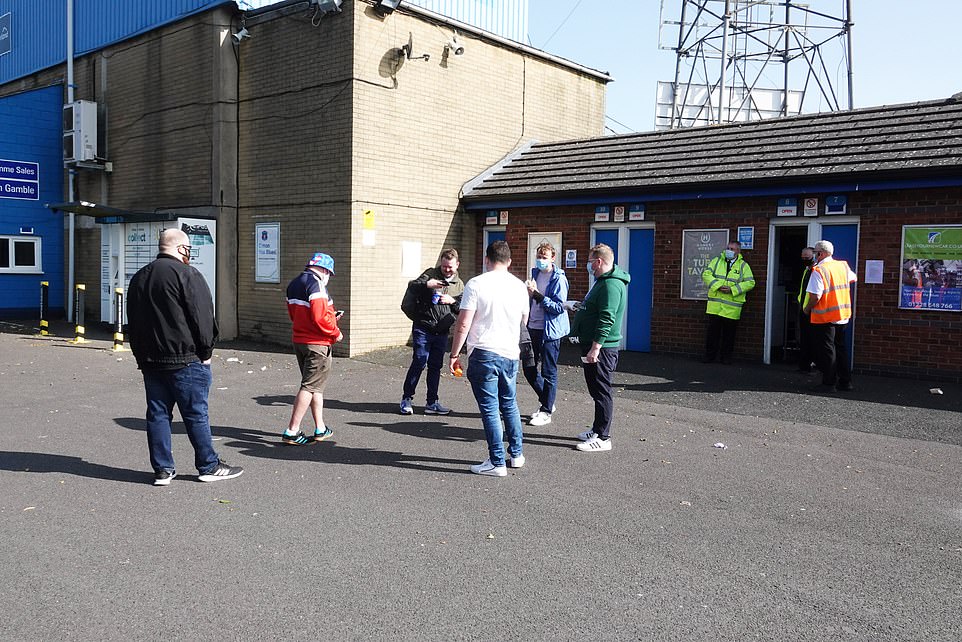 Club officials told fans not to high-five each other and to use the toilets inside the 18,000-capacity ground sparingly

Fans have returned to eight matches up and down the football league today, including in Norwich at Carrow Road.

Three generations of the Cooper family from Norwich said they’d been saving up their cheers during the lockdown and hoped the fans would be able to make enough noise to fill the 27,000-seater stadium.

‘It’s been a long-time coming, and we’ll be shouting as loud as we can,’ said Phil Cooper, 50, a financial advisor from Norwich.

His daughter Holly, 22, a therapy assistant said the months without football had been ‘hard’. 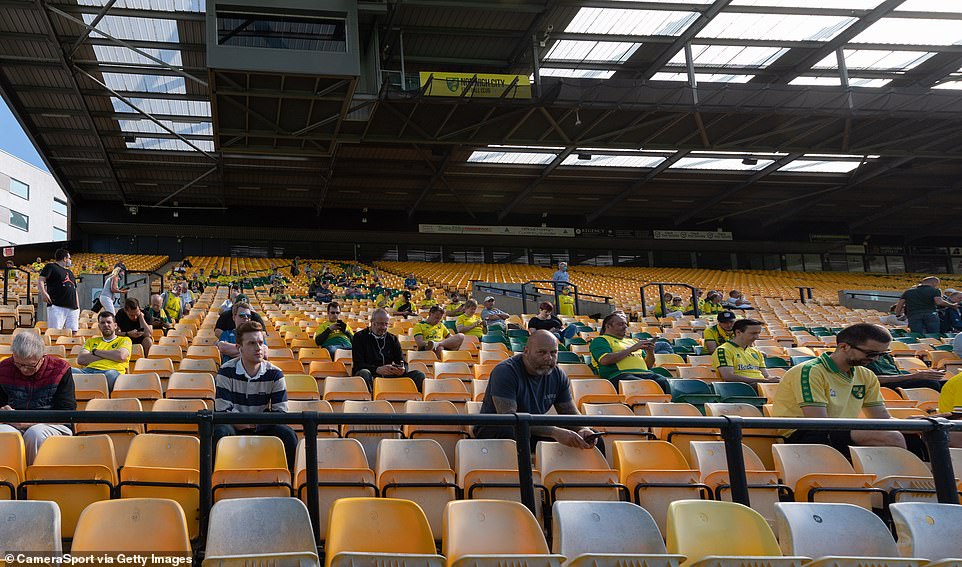 Carrow Road welcomed back Norwich City supporters today, as the club looks to recover following relegation from the Premier League 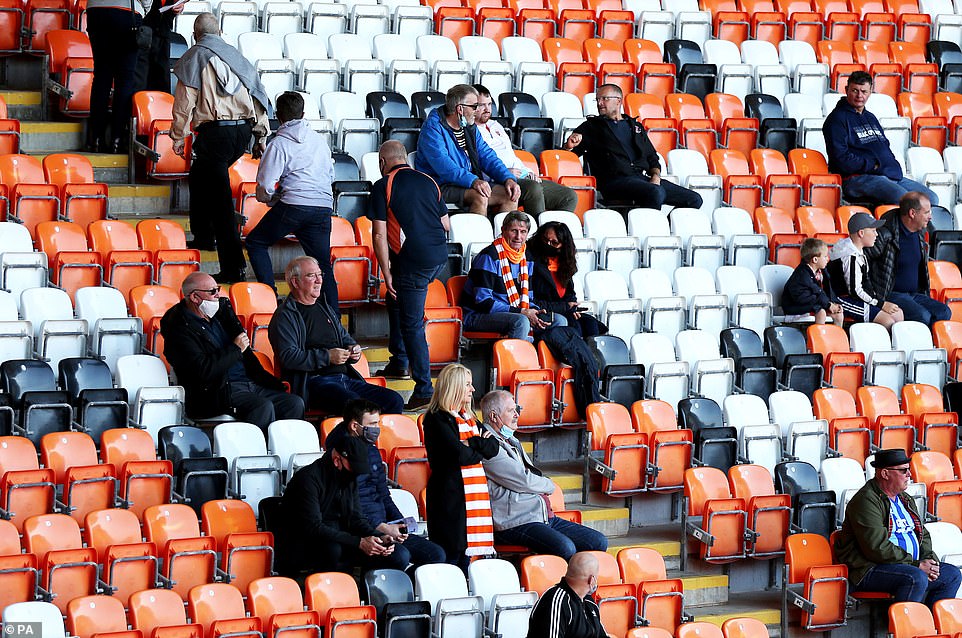 Blackpool City fans were able to cheer from the stands as football returned to Lancashire, six months after the Covid-19 lockdown

‘It wasn’t the best season for us last year being relegated from the Premiership, ‘ she said, ‘but hopefully this is the first step back to normality – and maybe promotion!’

Her grandmother Jan, 77 said the cloudless 20C weather was a good omen for the match: ‘It’s got to be a win after waiting all this time, hasn’t it?’ she said.

The Harrisons, a family of key workers from Bury St Edmunds were also enthusiastic about the re-start.

‘It will be quite emotional being back inside,’ said GP Paul Harrison, 51.

‘We’re a friendly club and we like to see our old heroes come back, even in different colours,’ he said. 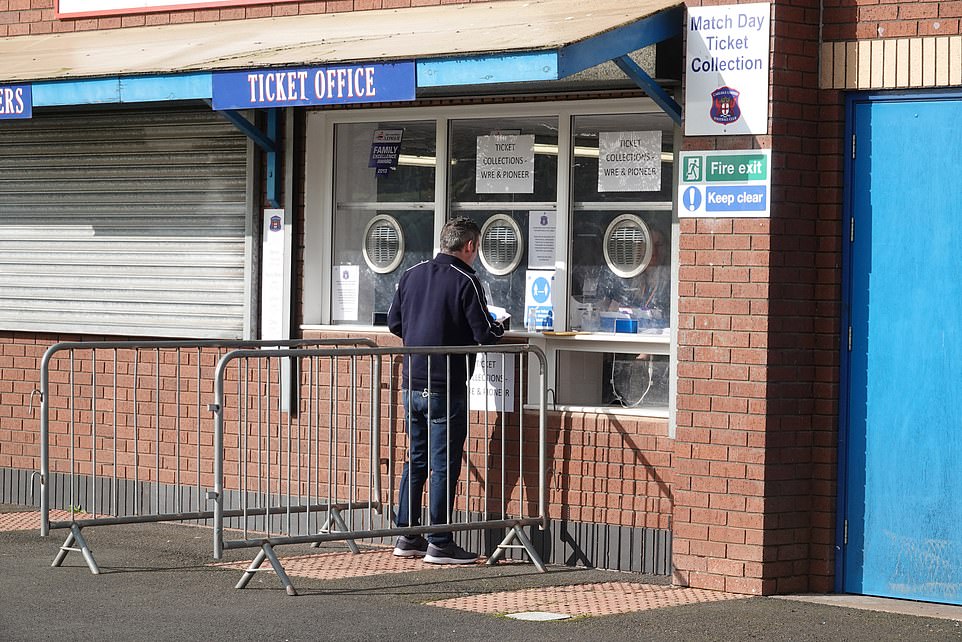 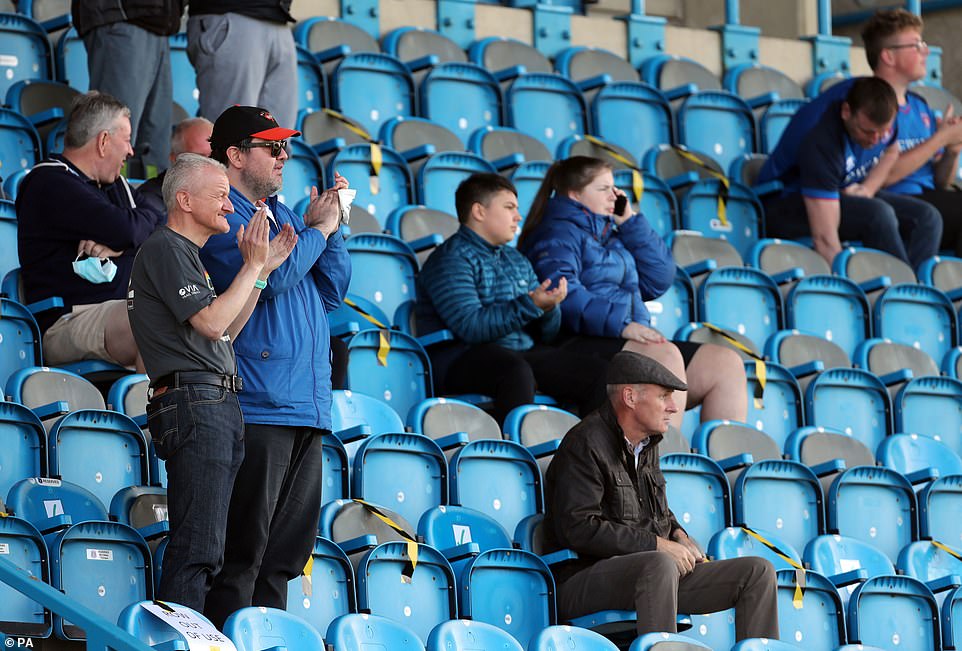 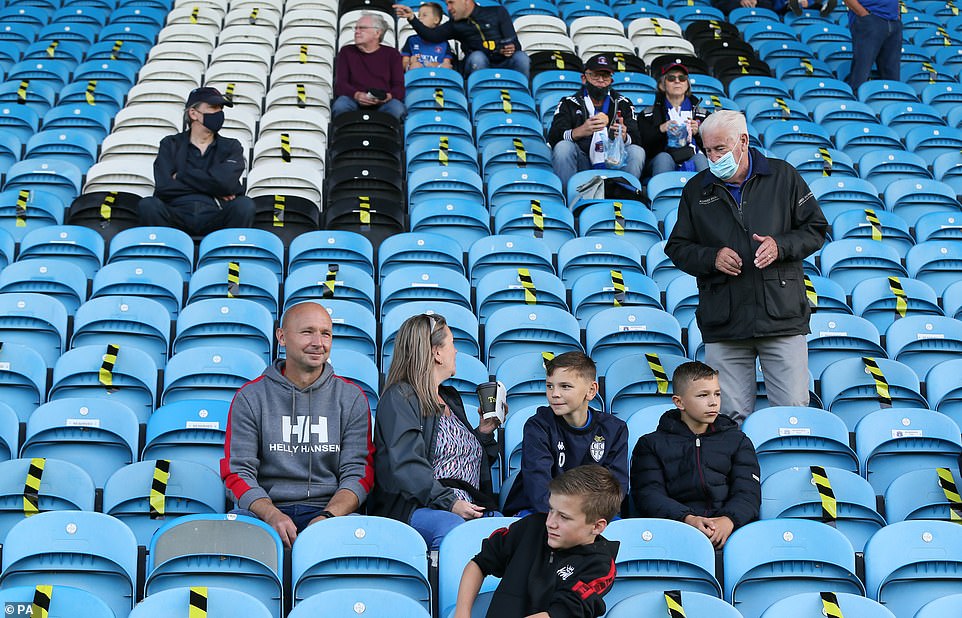 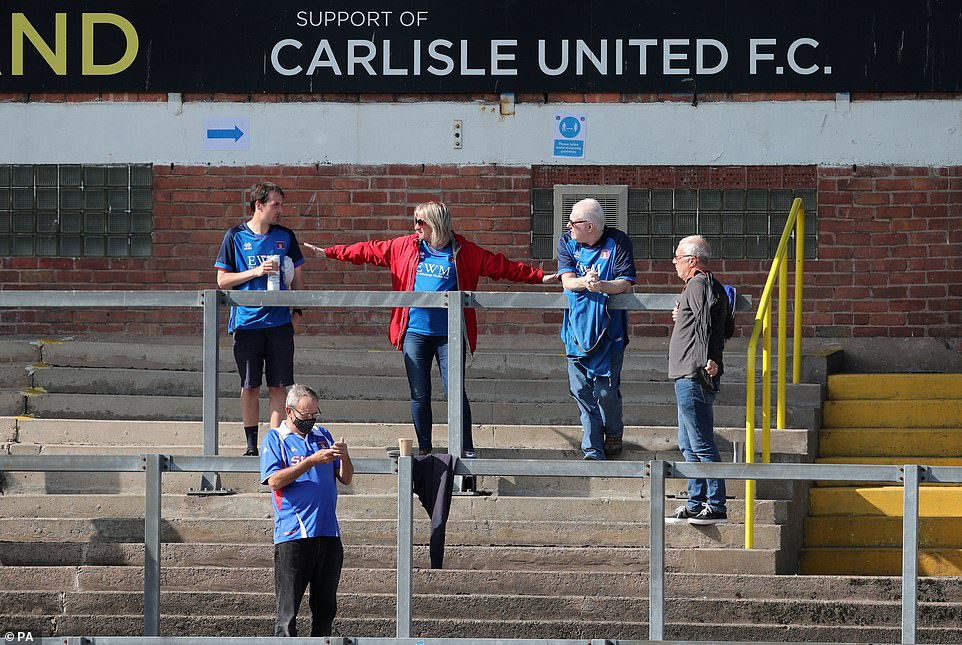 Today’s pilot saw 1,000 fans attend, in the hope that soon greater numbers could return to matches up and down the country 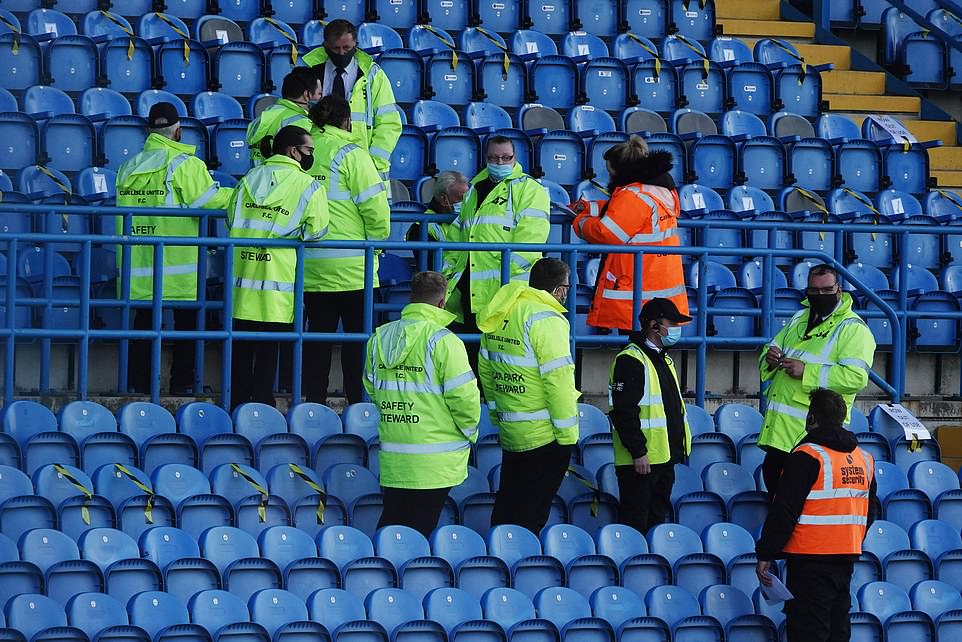 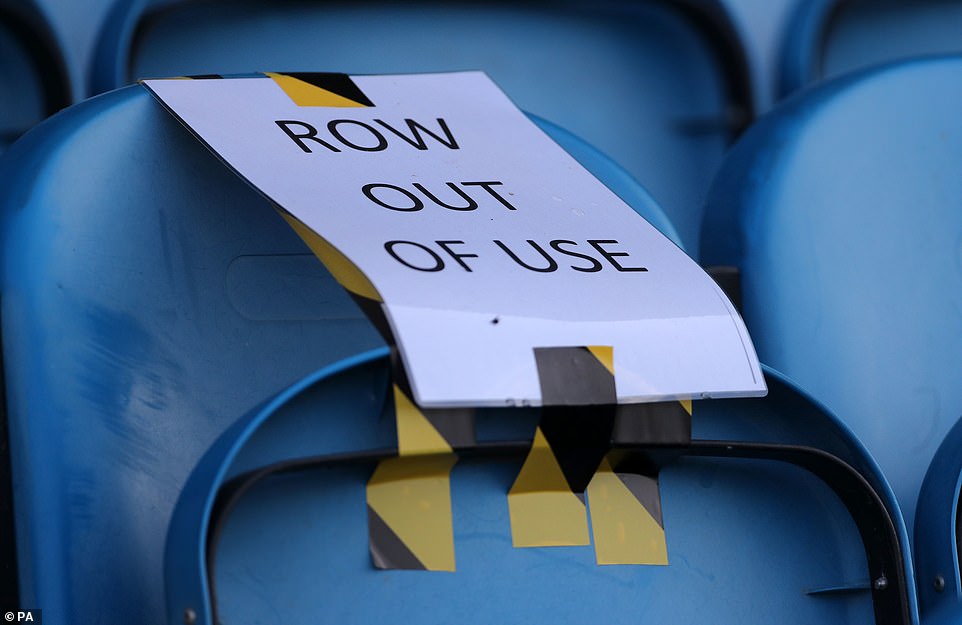 Carlisle normally sells around 1,800 season tickets which meant 800 were disappointed.

They were also asked not to high-five each other and to use the toilets inside the 18,000-capacity ground sparingly.

One of those was lorry driver Paul Barrett,58, who still made the 250- mile journey from his home near Caernarfon, Wales, to soak in the atmosphere and see lucky friends who had tickets.

As he emerged from the Brunton Park gift shop with a bag of purchases including the team’s 20-21 season shirt, he said: ‘This club is my life.

‘My father Raymond who is 87 has been a lifelong supporter and I have been for more than 50 years.

‘This corona virus is deadly and still dangerous and we all have to be as careful as we can be, particularly as it looks like it is getting bad again around the country. 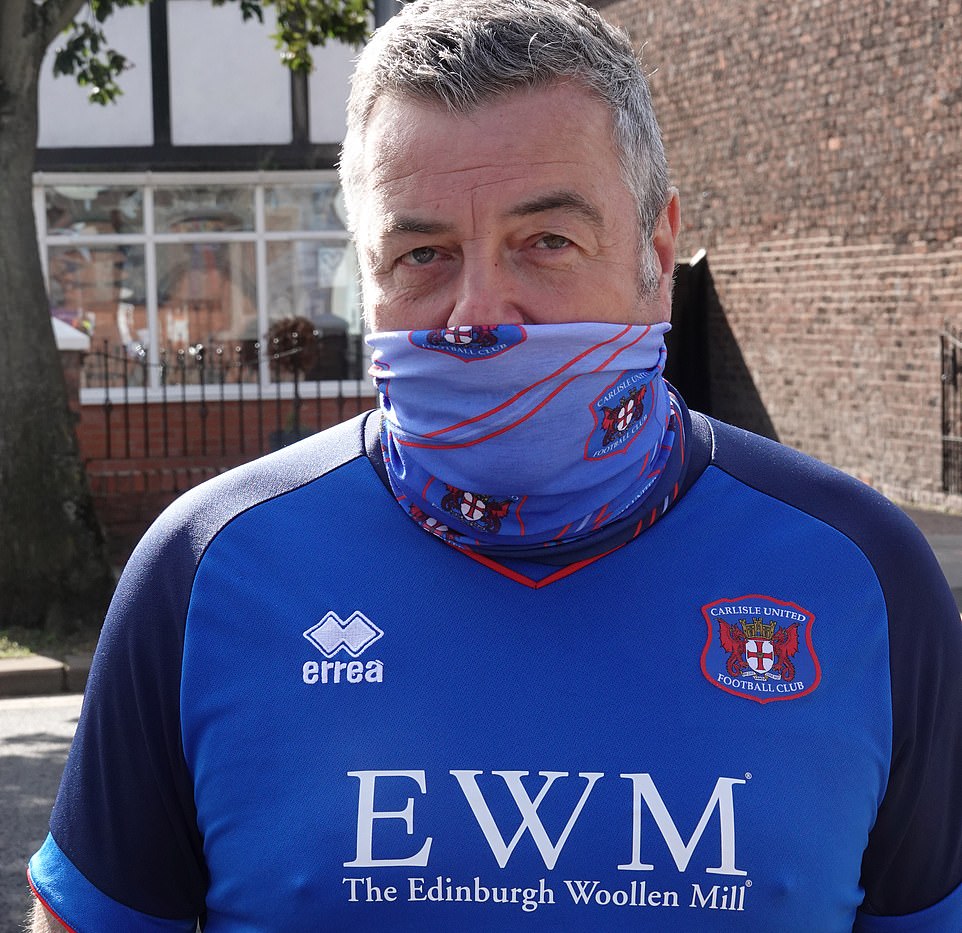 Paul Barrett drove 250 miles to the club from his home in Wales to see Carlisle United, he said: ‘This club is my life’ 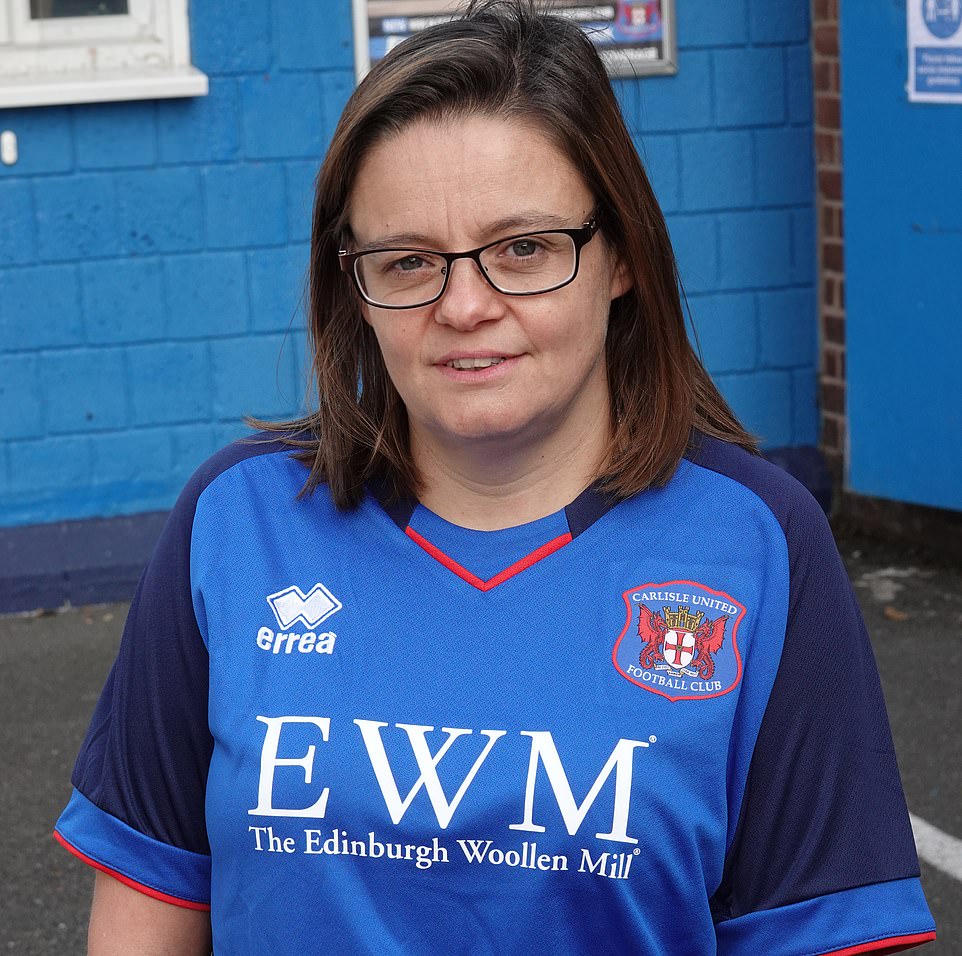 School teacher Heather Herring , 41, was at today’s match with her husband after six months away from the club

‘But I can see the club is doing everything it can to help keep people safe and to enjoy the football.

‘Hopefully this will lead to more supporters being allowed in here in the near future as well as at other grounds.

‘I don’t really mind not being at the match. I am going to watch it with my father online.’

Hotdog seller Alan Seggi, 60, whose Lakeland Steaks business usually served several thousand food items to fans before the pandemic, was back in business, but with a smaller stock. 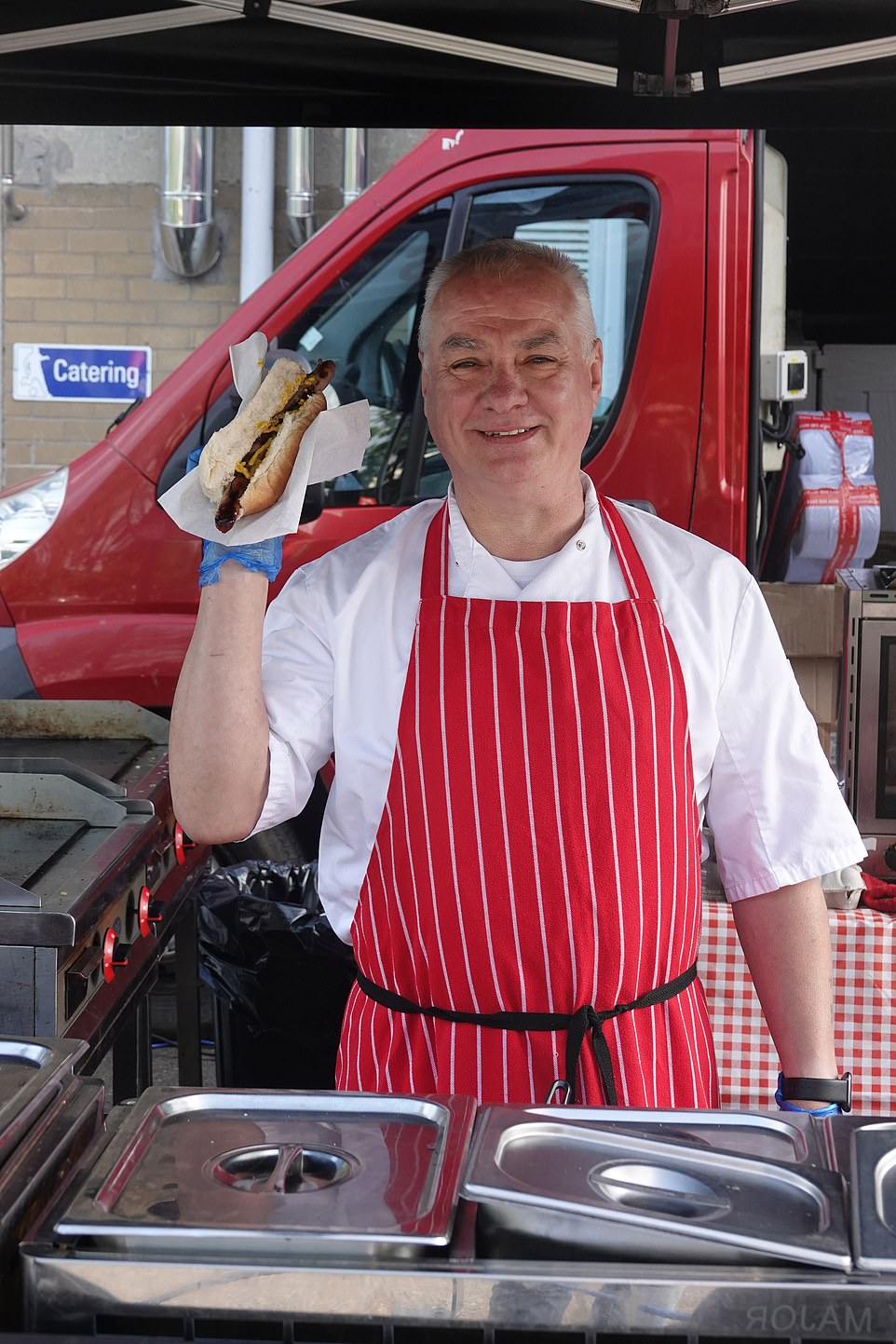 He said: ‘I don’t really expect to make any money today and will probably sell around 200 hot dogs.

‘As soon as the game kicks off I will be packing up and going on my way.

‘But today is a learning process. We could be like this for several years to come with little sign of normality.

‘I have brought some blue rope and some temporary barriers to keep fans and my staff at a safe distance while the food is served.

‘I only knew on Thursday that we would be back and it is with limited stock as fans won’t be allowed out of the ground at half time as they usually are.

‘But fingers crossed it all goes well today and it turns into a big step towards getting football back to normal.’ 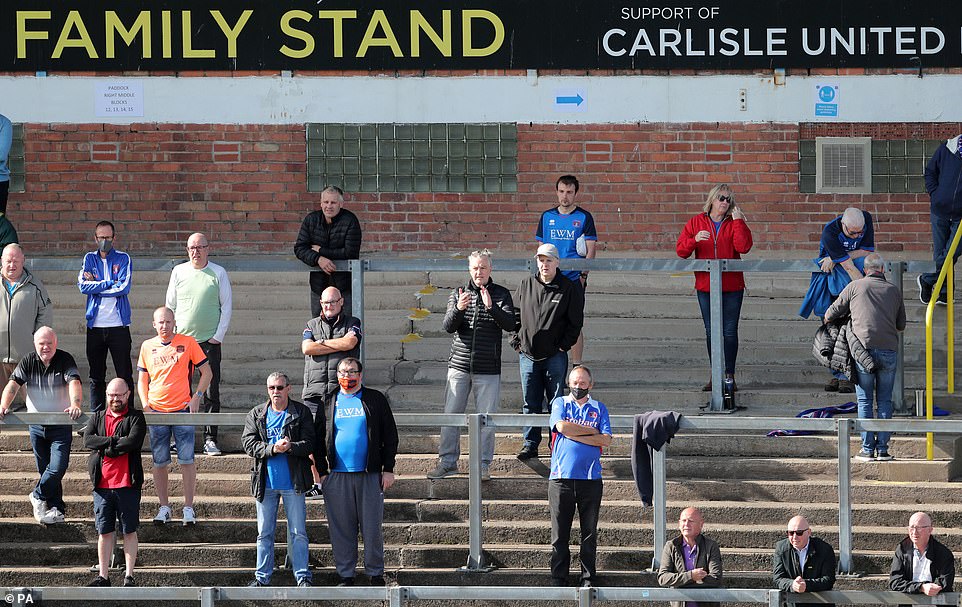 Fans said the ground was ‘a lot quieter than it should be,’ but were happy to be back after waiting six months to see their team live

Brian Ballantyne, 59, said: ‘It has been great walking into the ground again, although it is a lot quieter than it should be.

‘I don’t mind all the extra precautions. We have to be safe while we enjoy our football.’

His friend Stewart Winter, 47, added: ‘I was reading that parts of the North are shutting down again because of the virus creeping back.

‘I wasn’t sure if we would still be allowed into the ground and whether the league might change its mind and I am surprised we are still in the ground But it is marvellous.’

Steven Archibald, 45 and his nine-year-old daughter Elena were also among the lucky 1000.

Mr Archibald, an auditor, said: ‘The football is an important part of our lives and it is great that it is back for us. 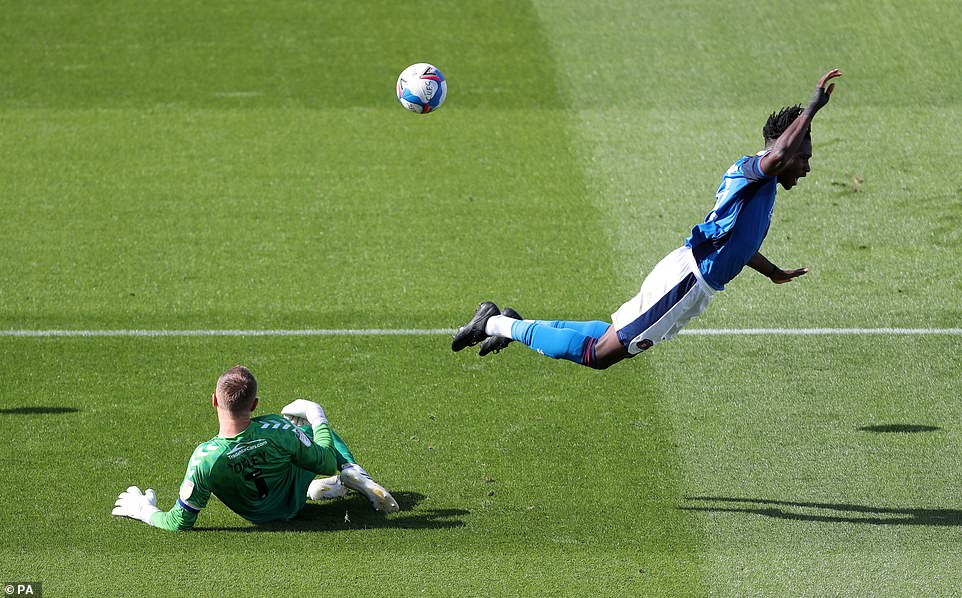 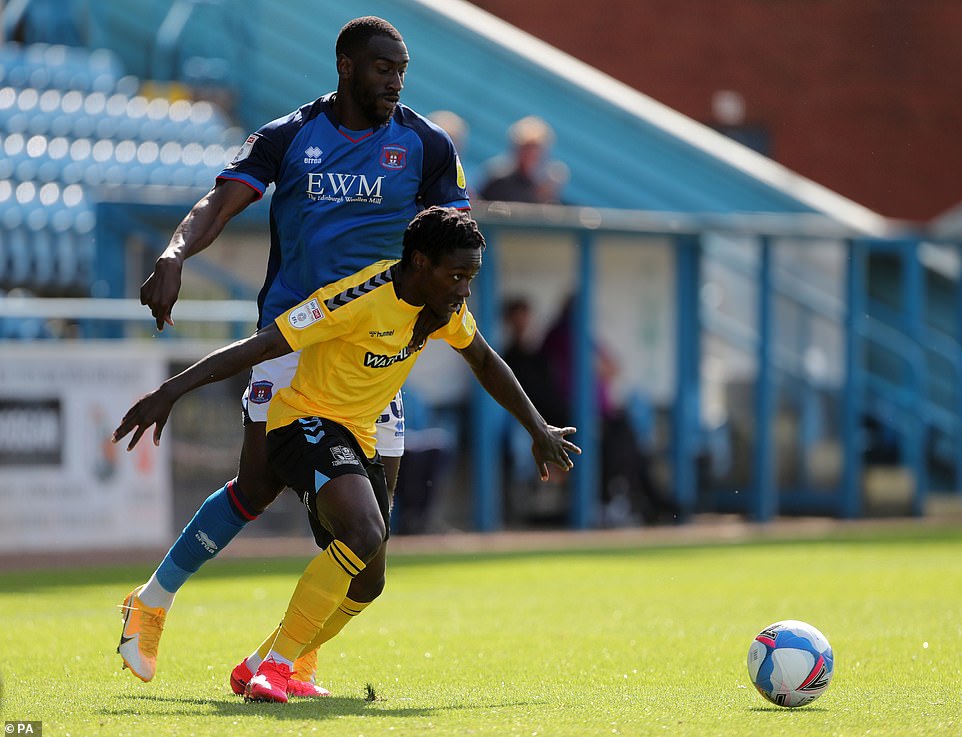 Carlisle lost their opening match of the season 3-0, while Southend United lost their’s 4-0

‘We need more fans back in the grounds, but of course we have to be safe and sensible.’

Asked why she liked going to football, Elena said: ‘Because my Daddy does.’

The Brunton Park ground has only one pub in its vicinity, The Bee Hive opposite the stadium.

Today it too had to follow strict Covid-19 rules with beer being served only to those who had pre-booked to ensure restrictions were adhered to.

In a message to fans he also warned of the money worries that have fallen on the three leagues. 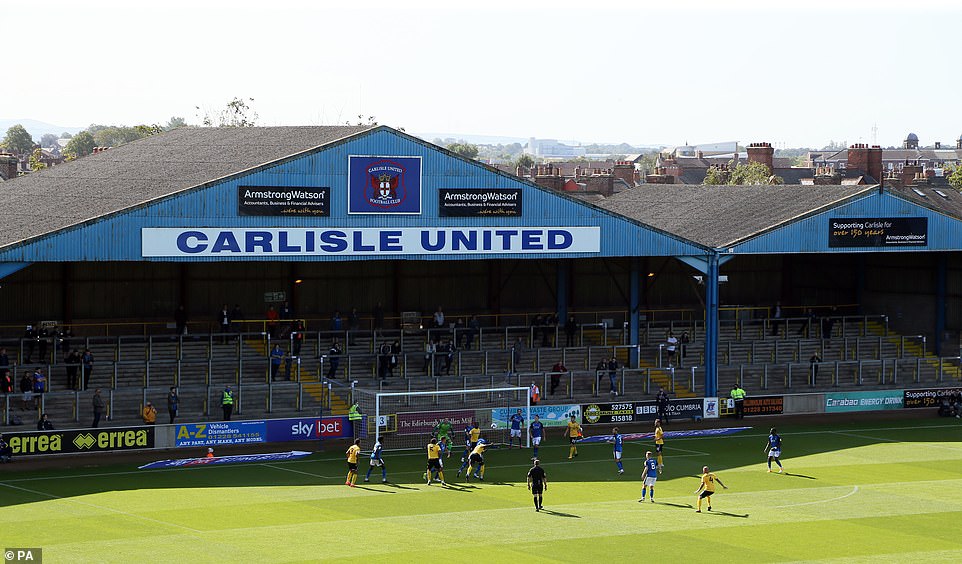 While players could pack together on the pitch, fans in the stands had to keep their distance 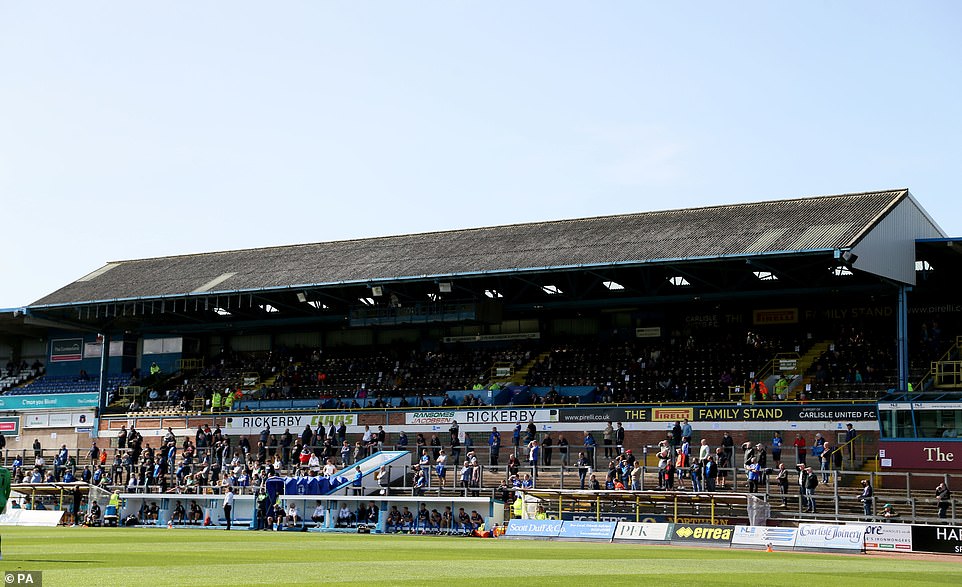 He said: ‘The financial picture remains stark. EFL Clubs lost £50m in gate receipts in the 2019/20 season and combined with a reduction in commercial revenue, the financial pressures on our Clubs is unrelenting.

‘While the League has been working on multiple plans to provide Clubs with financial support without spectators, it is estimated a further £200m will be lost if crowds do not return during the 2020/21 campaign.

‘The contribution to football’s finances made by match-going supporters should not be underestimated and is critical to the viability of League football and all EFL Clubs.

The pilot events give cause for optimism that a return of spectators in greater numbers will be possible before too long, but I’m acutely aware that the health and well-being of supporters and their wider communities remains the priority.

‘Therefore, we will continue to be guided by Government in regard to what is permitted.’