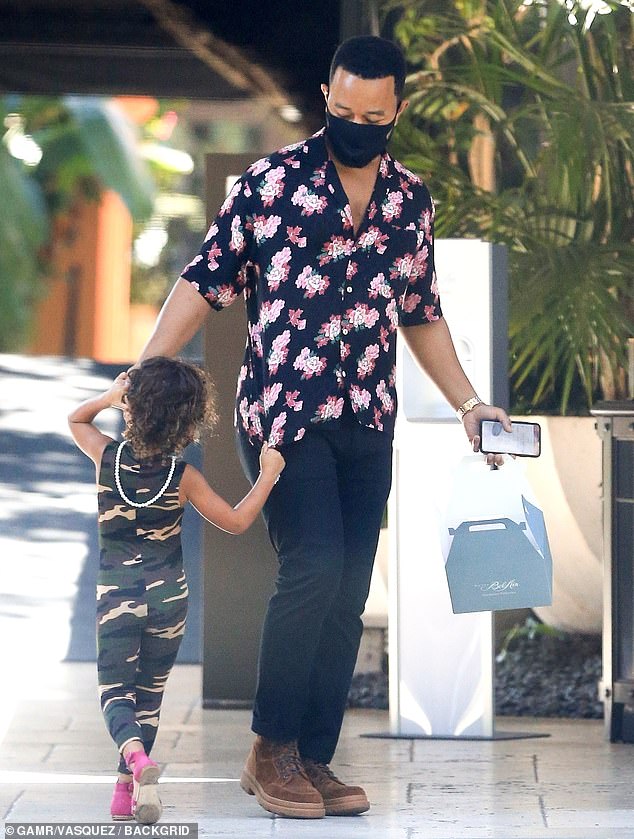 He and wife Chrissy Teigen have very publicly shared the recent miscarriage of a baby boy.

And on Sunday, John Legend and daughter Luna, four, were spotted out together at the very exclusive Bel-Air Hotel in Beverly Hills.

The musician doted on his firstborn as he headed home carrying a box of goodies to go.

Doting dad: John Legend doted on his daughter Luna, four, as he left the ultra exclusive Bel-Air Hotel on Sunday with a box of goodies to go in his hand

John was dressed in a floral print shirt and black trousers along with brown shoes.

He had on a black cloth face mask and carried his phone in one hand.

Little Luna had on a camo jumpsuit with pink sandals with ankle straps. 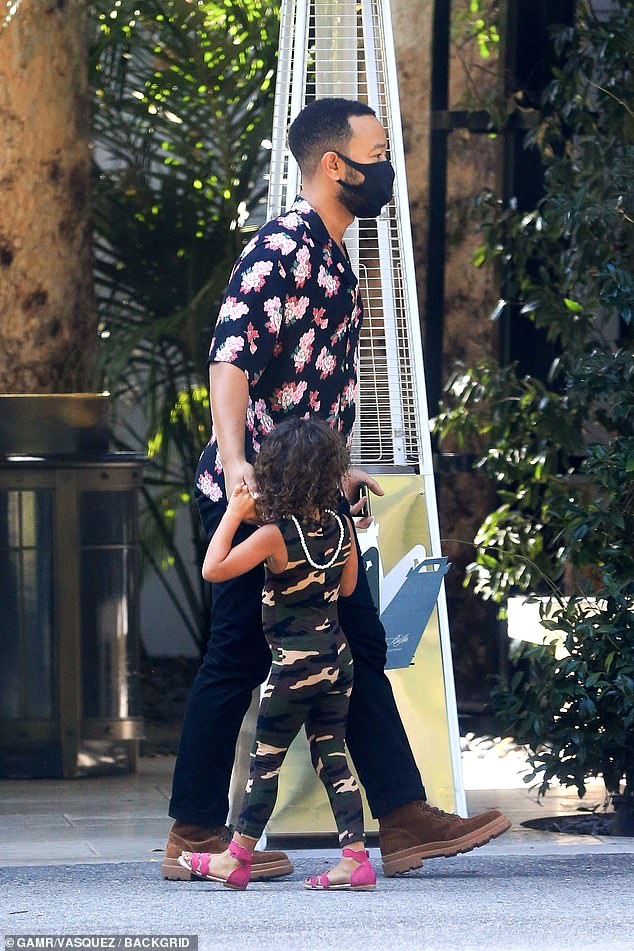 Sweet: John was dressed in a floral print shirt and black trousers along with brown shoes. Little Luna, who he shares with wife Chrissy Teiegn, had on a camo jumpsuit with pink sandals

Just this past Friday, Chrissy, who also shares son Miles, two, with John,  broke her silence following her tragic loss.

‘We are quiet but we are okay,’ she shared on her Instagram, while posting a screenshot of a series of tweets from her husband John Legend.

In his post, John, 41, had shared video of his emotional Billboard Music Awards performance on Wednesday night, saying: ‘This is for Chrissy. I love and cherish you and our family so much.’

It was the 34-year-old model and cookbook author’s first Instagram update since revealing she miscarried her third child four month into the pregnancy. 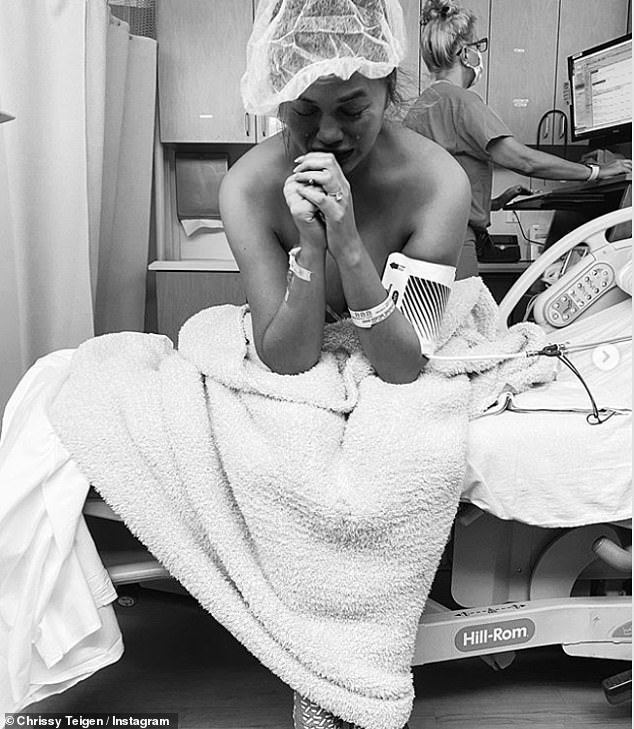 Coping: This past Friday, Chrissy, 34, shared with fans via social media that her family is ‘quiet but… okay’ after she miscarried her and John’s third child, a boy, at four months

The All Of Me singer’s lengthy caption continued: ‘We’ve experienced the highest highs and lowest lows together. Watching you carry our children has been so moving and humbling…

‘I’m in awe of the strength you’ve shown through the most challenging moments. What a gift it is to be able to bring life into the world. We’ve experienced the miracle, the power and joy of this gift, and now we’ve deeply felt its inherent fragility.’

John and Chrissy were seen out in public for their first time since the tragedy on Thursday, pictured fetching groceries and Halloween supplies before spending time with their kids.

Chrissy and John tied the knot in Italy back in September of 2013, and conceived Miles and daughter Luna, four, through IVF treatment, while their third pregnancy occurred naturally and was a surprise.

Chrissy announced the loss of her third baby in late September, just weeks after the pair had revealed in John’s Wild music video that they were expecting again. 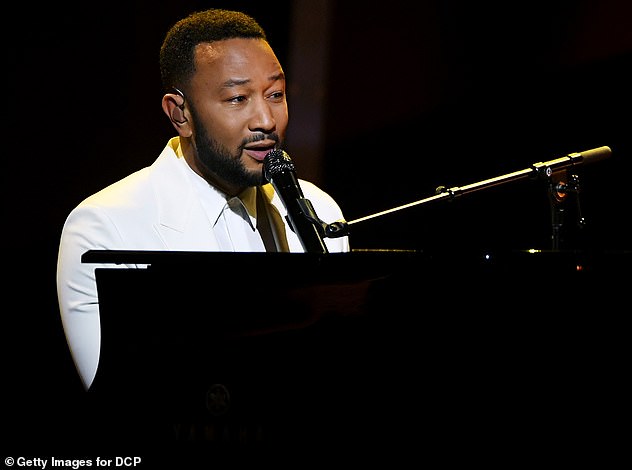 Emotional tribute: On Wednesday night, the singer had dedicated his song Never Break at the 2020 Billboard Music Awards to his wife 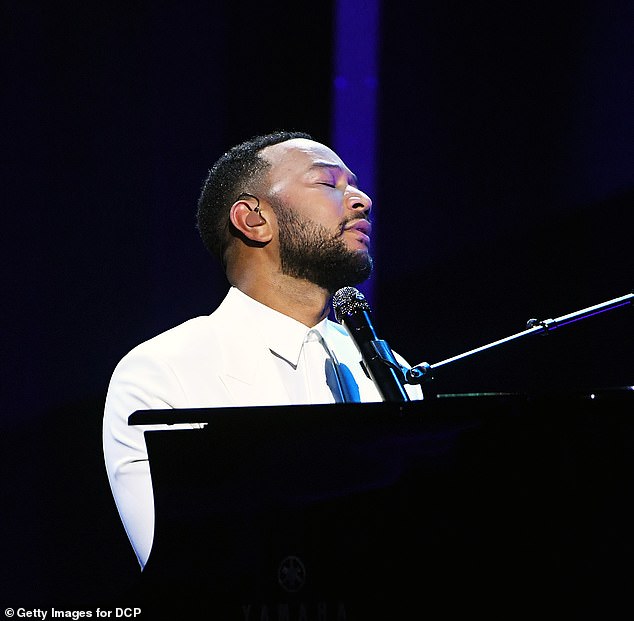 Never break: He then shared video of the performance on social media, saying: ‘This is for Chrissy. I love and cherish you and our family so much’

On Wednesday night, the singer had dedicated his heart-wrenching performance of his song Never Break at the 2020 Billboard Music awards to his model wife.

His fellow The Voice judge Kelly Clarkson, 38, who hosted the awards show, also gave them a special shoutout.