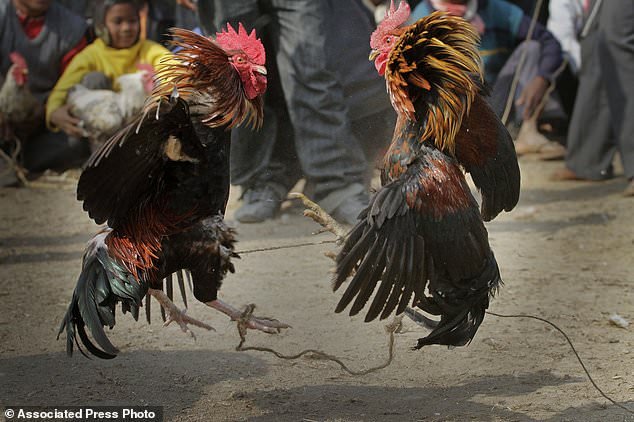 A man was killed in an illegal cockfight when he was slashed with a blade he had tied to the leg of his rooster.

Thangulla Satish, 45, was preparing the bird for the fight in Lothunur village in southern India when it suddenly fluttered in panic and tried to escape.

He tried to grab it when the three-inch knife tied to its leg impaled him in the groin and he died of blood loss on the way to hospital.

The man was killed when the rooster panicked and tried to escape, accidentally impaling him in the groin (stock image)

Officers held the bird at a police station before transferring it to a farm as it may be later needed as evidence.

Inspector B. Jeevan said officers were looking for more than a dozen people who had organised the illegal cockfight.

They could face charges of manslaughter, illegal betting and hosting a fight.

If found guilty they face up to two years in prison.

Inspector Jeevan said: ‘Satish was hit by the rooster´s knife in his groin and started bleeding heavily.

‘We are searching for the other 15 people involved in organising the illegal fight.’ 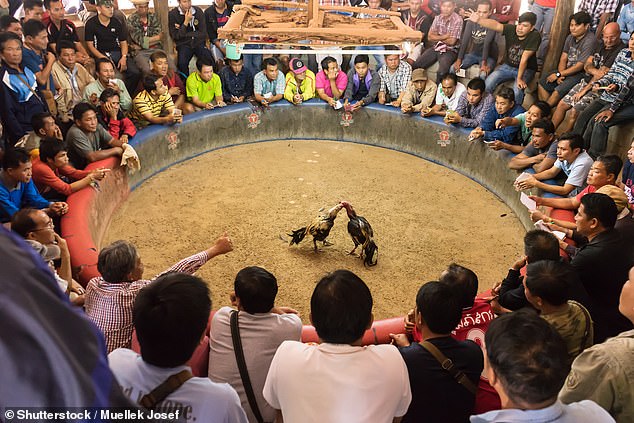 Thousands of people attend the fights, despite a nationwide ban which was imposed in 1960

The bloodsport is common in southern India despite a countrywide ban imposed in 1960.

The cockfights are said to often be held under the watch of local politicians and involve large sums of betting money. Crowds of hundreds are known to watch.

Last month a spectator was killed when a razor blade attached to an escaping bird cut his stomach.

Last year, a man was killed when a blade attached to his bird’s leg hit him in the neck during a cockfight in Andhra Pradesh.

In 2010, a rooster killed its owner by slashing his jugular vein in West Bengal state.

According to police, the rooster involved in last week’s incident was among many other roosters prepared for the cockfight betting festival in Lothunur village.

Despite the efforts of animal rights activists thousands of roosters die every year.