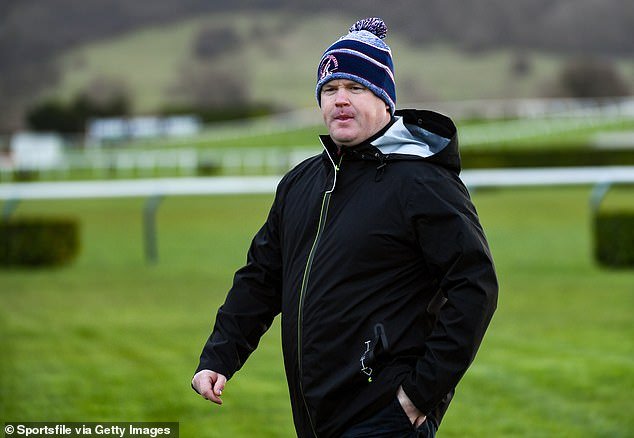 By Marcus Townend for the Daily Mail

Plans are being considered to allow a caretaker to take the licence at Gordon Elliott’s stable with growing acceptance that the trainer faces a ban at an Irish Horseracing Regulatory Board hearing on Friday.

It is understood Elliott intends to accept any punishment and will not drag out the case by lodging an appeal.

The British Horseracing Authority have said Elliott will not be able to have runners in Britain while the case is being dealt with by the IHRB.

Someone new at the helm would allow owners who keep their horses at Elliott’s County Meath base to have their entries run at the Cheltenham Festival, which starts a week on Tuesday.

It could also mean some form of the business will still exist for Elliott to return to after he has served his punishment. Around 80 staff work for him and there is rising sympathy and concern for their situation as innocent victims of the furore.

Elliott’s main backer, Michael O’Leary’s Gigginstown Stud, continue to support Elliott after he apologised over a photograph of him sitting on a dead horse, which surfaced at the weekend to shock racing and the wider world.

Elliott has also received support from owner Philip Reynolds, who has eight horses at the stable, including talented chaser Presenting Percy.

In a statement, Reynolds said: ‘None of us has a monopoly on shock, horror, disappointment, anger and sadness — and having spent my life owning horses and in the pet industry, believe me, in this case I own as much of those feelings as anyone else.

‘My professional relationship with Gordon dates back more than five years. His facilities are world class and as a trainer his record speaks for itself.

‘The authorities will deal with Gordon but his trial has already played out. We have stripped him bare and flogged him in public. The scars of this week are his ultimate punishment.

‘For all these reasons, and accepting this is a one-time error of judgment, I will stay with Gordon — and I hope we can all find it in our hearts not to destroy him.’

But Noel and Valerie Moran, who have more than 20 horses with Elliott, including Triumph Hurdle favourite Zanahiyr, dismissed rumours their horses had left the yard despite their company eCOMM Merchant Solutions terminating a contract as the stable’s sponsor.