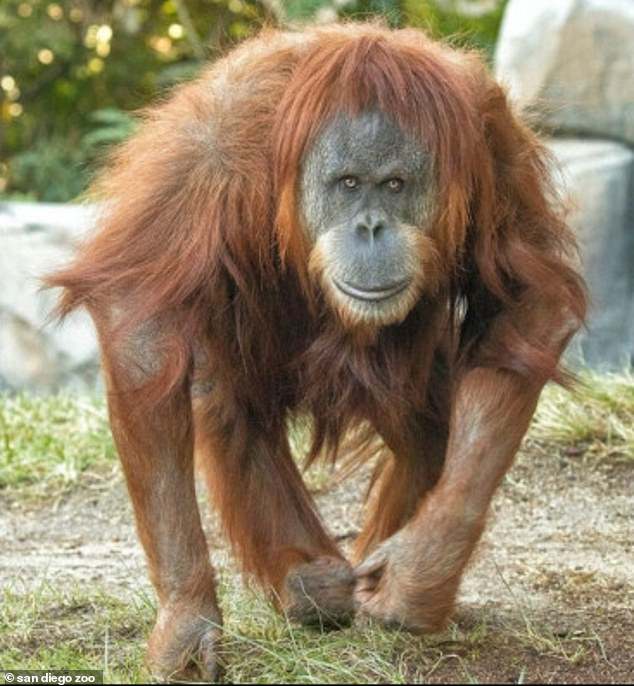 By Emily Crane For Dailymail.com

Nine great apes at the San Diego Zoo have become the first non-humans to receive a COVID-19 vaccine.

Four orangutans and five bonobos at the California zoo were given doses of an experimental coronavirus vaccine developed specifically for animals last month.

One of those orangutans, whose name is Karen, was the first in the world to undergo open-heart surgery back in 1994.

The vaccines were handed out after eight gorillas at the zoo tested positive for COVID-19 back in January after becoming infected by a zoo keeper.

Staff at the zoo were able to administer the shots after distracting the apes with treats.

Four orangutans, including one named Karen (above), and five bonobos at the San Diego Zoo in California were given doses of an experimental coronavirus vaccine made for animals last month

The vaccine, which was developed by a veterinary pharmaceutical company called Zoetis, has only been tested on dogs and cats.

Lamberski, however, said it was worth the risk given the zoo’s 14 gorillas, eight bonobos and four orangutans all spend a considerable amount of time indoors together where the virus can spread more easily.

She said blood samples from one of the orangutans and bonobos is now being tested to see if the animals have developed antibodies, which would mean the vaccine worked.

The zoo has three doses left, which will go to the bonobos and one gorilla who didn’t contract COVID-19 when the outbreak occurred two months ago.

‘This isn’t the norm. In my career, I haven’t had access to an experimental vaccine this early in the process and haven’t had such an overwhelming desire to want to use one,’ Lamberski said.

Lamberski said it was common to give vaccines that have been tested on one species to another because they are designed for a specific pathogen. 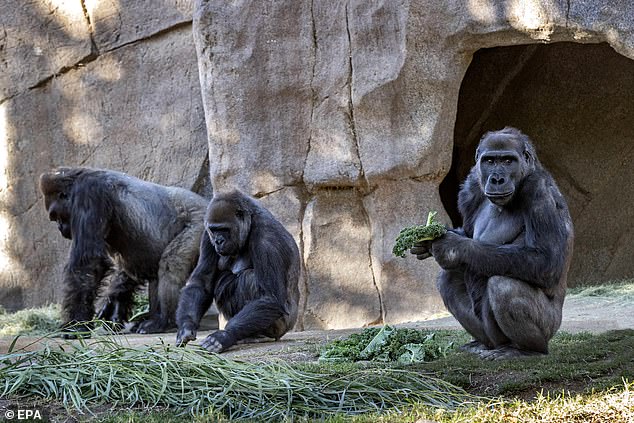 ‘We commonly use vaccines designed with dogs and cats for lions and tigers,’ she said, adding that the apes at the zoo are given human vaccines for the flu and measles.

Other zoos across the US have already requested the vaccines for their animals. 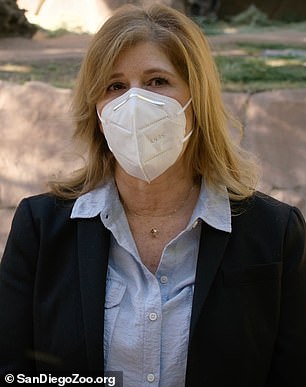 The park’s executive director, Lisa Peterson revealed in January that eight gorillas that live together at the park tested positive after several started coughing

The gorillas at the San Diego Zoo will not be vaccinated for now given they have been exposed.

The troop of gorillas tested positive for COVID-19 in early January after a zoo keeper became infected.

One of the gorillas, a 49-year-old silverback named Winston, received antibody therapy as part of his treatment because he had pneumonia, likely caused by the virus, as well as heart disease.

He has now recovered.

Officials had tested the troop of gorillas after two apes began coughing on January 6. Positive test results were confirmed by the Department of Agriculture National Veterinary Services Laboratories in three gorillas.

The park north of San Diego has been closed to the public as part of California’s lockdown efforts to curb cases and the park’s wildlife care team wore masks at all times around the gorillas.

Wildlife experts have expressed concern about gorillas becoming infected with COVID given they’re an endangered species that share 98.4 percent of their DNA with humans and are inherently social animals.