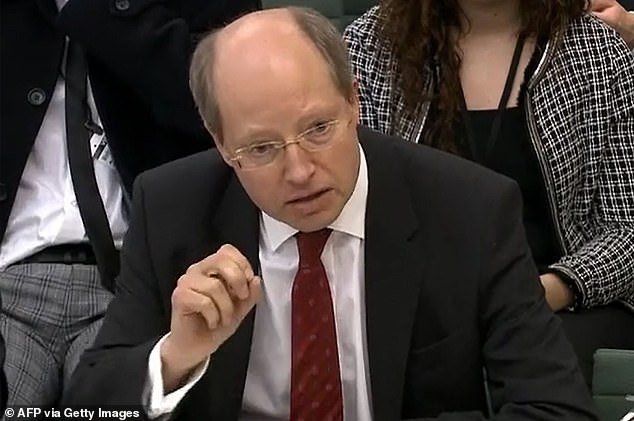 The Government has paid out ‘substantial’ damages to a former senior civil servant who accused Priti Patel of bullying, it was revealed today.

Sir Philip Rutnam, who quit as the Home Office’s permanent secretary after accusing the Home Secretary of a ‘vicious and orchestrated briefing campaign’ against him, said he was pleased his claim for constructive dismissal had been settled.

Ms Patel was allowed to remain in her post after an internal investigation last November when the Prime Minister decided her actions did not warrant being sacked.

In a statement today the Government said it ‘regretted’ the circumstances surrounding Sir Philip’s resignation – although it did not accept liability and defended its decision to defend the case.

The taxpayer-funded payout is believed to be well into six-figures, but the decision to settle means that Ms Patel will avoid being cross-examined during any employment tribunal hearing.

In a statement Sir Philip said: ‘I am pleased to say that the Government has today settled the claims that I brought against them and which were due to be heard in an employment tribunal in September.

Sir Philip Rutnam, who quit as the Home Office’s permanent secretary after accusing the Home Secretary of a ‘vicious and orchestrated briefing campaign’ against him, said he was pleased his claim had been settled. Ms Patel was allowed to remain in her post after an internal investigation last November when the Prime Minister decided her actions did not warrant being sacked.

‘I have received excellent support during this process and I would like to express warm thanks to the FDA and to my legal team, Slater and Gordon and Gavin Mansfield QC.

‘I also want to record my appreciation and thanks to the many individuals, known and unknown to me, who have expressed their support throughout.

‘This settlement resolves my own case. The FDA is continuing to pursue in separate proceedings the wider issues that have been raised.

‘I now look forward to the next stages of my career.’

Ms Patel was accuse of abusive behavior to a series of civil servants across three departments she worked at in Government.

She was investigated after Sir Philip quit more than a year ago. In a bombshell resignation statement, which he read live on television, he accused Miss Patel, 47, of ‘shouting and swearing, belittling people, making unreasonable and repeated demands’.

He was one of the most senior civil servants in Whitehall, having joined the Home Office as permanent secretary – the top civil servant role in each department – in April 2017 having previously done the same job at the Department for Transport for five years.

He accused Ms Patel of orchestrating a ‘vicious’ campaign against him, of lying about her involvement in it and of creating a climate of fear in her department.

It prompted an avalanche of claims against Boris Johnson’s highest ranking female minister, all of which she denies.

Claims against Ms Patel include the allegation she ‘dressed down’ staff in front of their colleagues and asked: ‘Why is everyone so f***ing useless?’

The PM let the Home Secretary off with an apology last November after the probe found she broke the ministerial code but also blasted ‘inflexible’ civil servants for obstructing her.

Normally ministers are expected to resign if they breach the code but the Prime Minister makes the final decision and deemed it not a resigning matter.

Author Sir Alex Allan, who said she had broken the ministerial code – albeit ‘unintentionally’ – resigned in protest at the decision.

Shadow home secretary Nick Thomas-Symonds said: ‘Taxpayers will be appalled at having to pick up the bill for the Home Secretary’s unacceptable behaviour.

‘The Home Secretary still has very serious questions to answer about her conduct and the FDA union’s legal case continues.

In a statement posted online, the Government said: ‘Joining the civil service in 1987, Sir Philip is a distinguished public servant. During this period he held some of the most senior positions in the Civil Service including as permanent secretary of the Department for Transport and the Home Office.

‘The then cabinet secretary wrote to Sir Philip when he resigned. This letter recognises his devoted public service and excellent contribution; the commitment and dedication with which he approached his senior leadership roles; and the way in which his conduct upheld the values inherent in public service.

‘The Government regrets the circumstances surrounding Sir Philip’s resignation. The Government and Sir Philip are now pleased that a settlement has been reached to these proceedings.’