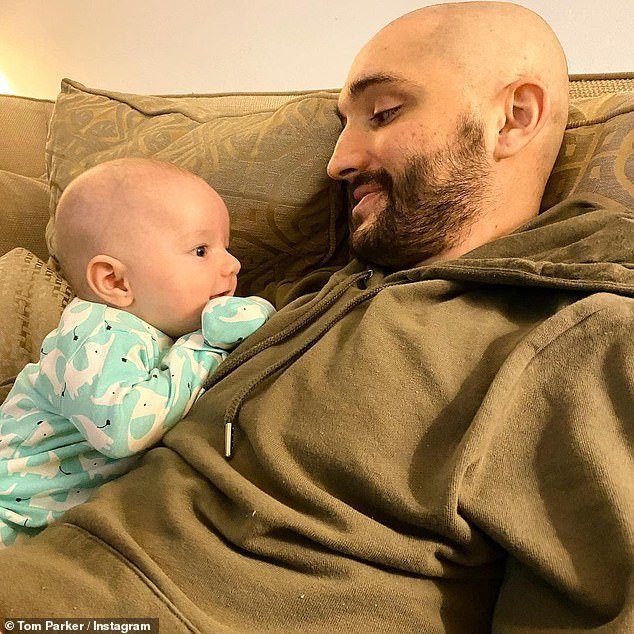 Tom Parker spent some quality time with his baby son Bodhi on Monday, sharing a blissful photo of the pair snuggling on the sofa.

The Wanted star, 32, had his little one, four months – who was wearing an adorable blue elephant onesie – propped up on his chest as he gazed lovingly at him.

Tom’s sweet snapshot comes as he continues to battle a terminal brain tumour after being diagnosed with a stage 4 glioblastoma in September 2020.

He wrote alongside the image: ‘Me and the boy @bodhithomasparker nothing better than cuddles with the kids!’ (sic)

Sweet: Tom Parker spent some quality time with his baby son Bodhi on Monday, sharing a blissful photo of the pair snuggling on the sofa

Tom, who is currently receiving chemotherapy and radiotherapy, has confirmed that he is ‘responding well’ to treatment and his tumour has shrunk ‘significantly’.

The Glad You Came hitmaker is a father-of-two to daughter Aurelia, 16 months, and son Bodhi, and shares his young children with wife Kelsey Hardwick, 30.

Kelsey recently revealed the couple’s children are too young to understand ‘how ill their dad actually is’.

Speaking during an appearance on Loose Women earlier this month, she said: ‘I just think that they don’t really know that daddy is ill at the moment. 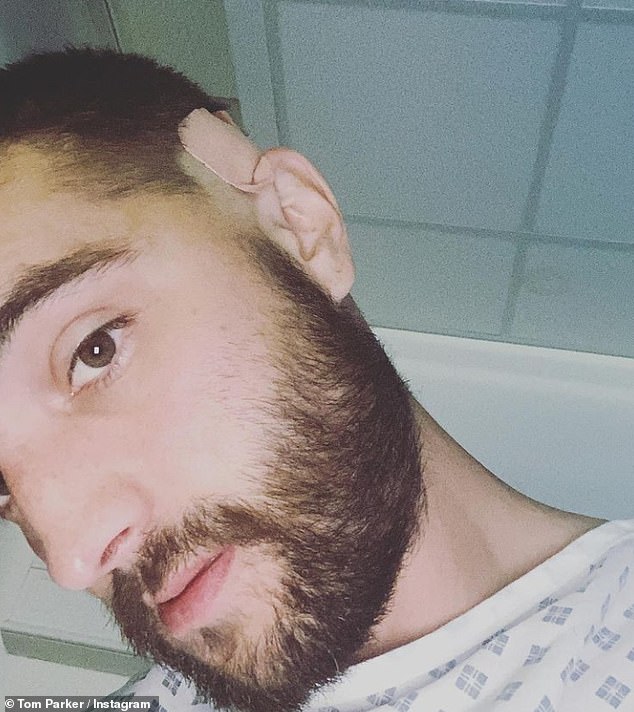 Positive: The Wanted star, 32, continues to battle a terminal brain tumour after being diagnosed with a stage 4 glioblastoma in September 2020

‘When Tom goes off to treatment, he’s off or he’s going to work or wherever he’s going.

‘So to them, they don’t really know how ill their dad actually is. They’re doing so well, the kids. We’re all doing really well.’

Despite Tom’s shock diagnosis, Kelsey said he is doing ‘really well’ after the family were thrilled to learn the tumour had ‘significantly reduced’ in January.

She explained : ‘Tom’s doing really well. We had a meeting last Thursday and he’s just had another stable scan, so he’s doing so well.

‘The tumour has shrunk, we’ve had a significant reduction. We were all just in tears when we got that news in January.

‘We just couldn’t believe it, that he’d had radio and chemo and he’s had a significant reduction after that. We were just all so overwhelmed.’

The singer has tried various methods to help with his recovery since he was diagnosed, including a vegan diet, which he has subsequently ditched.

Earlier this month, the doting father revealed he had invested in a £2,500 tap from the United States to deliver alkaline water in a bid to help his cancer.