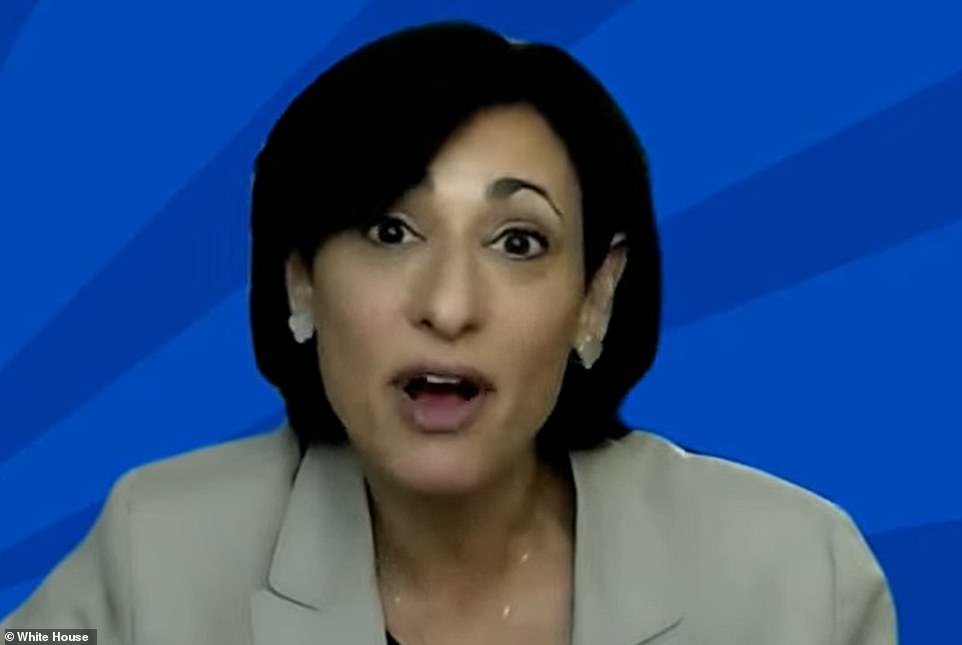 America’s top health official is warning of ‘impending doom,’ as COVID-19 cases, hospitalizations and deaths all spike ominously in the U.S.

‘When I first started at CDC about two months ago, I made a promise to you: I would tell you the truth, even if it was not the news you wanted to hear. Now is one of those times when I have to share the truth, and I have to hope and trust that you will listen.

‘I am going to pause here, I’m going to lose the script and I am going to reflect on the recurring feeling I have of impending doom…we have so much reason for hope, but right now I’m scared.’

In the past week, the average number of new daily infections has risen by 10 percent to nearly 60,00 a day, according to the CDC’s data.

And hospitalizations have risen to more than 4,800 new admissions a day.

Even new daily deaths, a metric that typically doesn’t rise until weeks after new infections increase, have increased by about three percent, to just shy of 1,000 a day, compared to the prior seven-day rolling average.

‘So I’m asking you to just hold on a little longer, to please get vaccinated when you can, so that all those people we all love will still be here when the pandemic is over,’ Dr Walensky said in an emotional plea.

‘I am scared,’ said Centers for Disease Control and Prevention (CDC) director Dr Rochelle Walensky during a an emotional Monday press briefing (file) 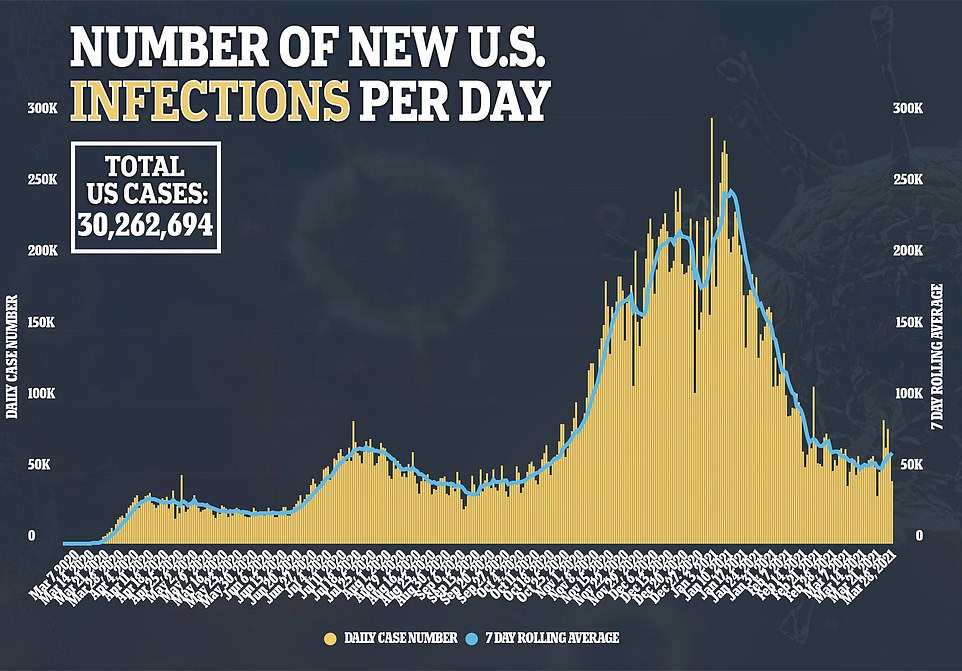 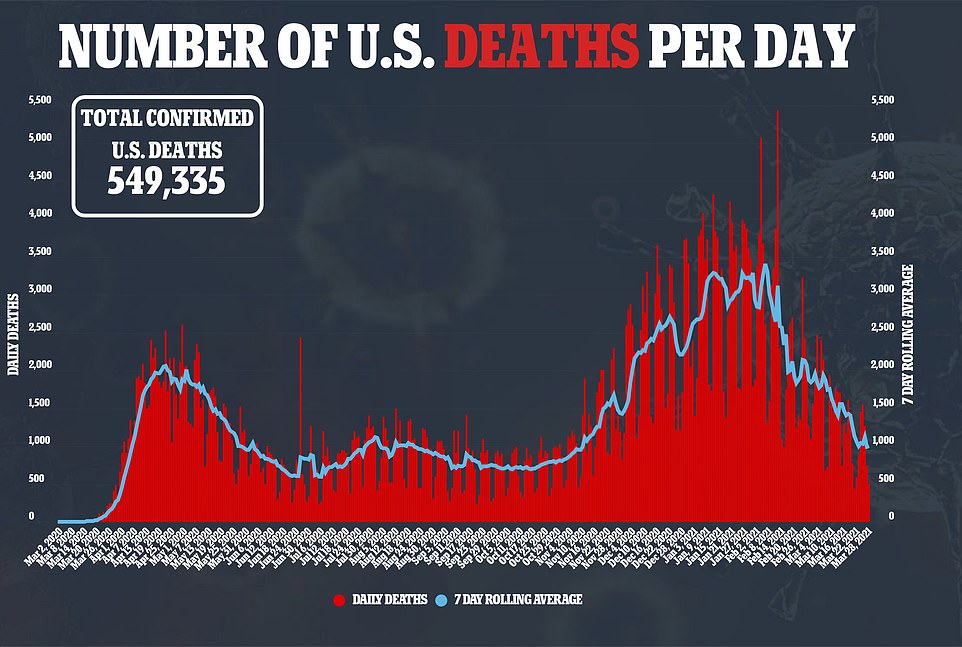 Dr Walensky was visually shaken as she recounted the horrors she has seen as a physician on the front lines of the pandemic.

‘I know what it’s like s a physician to stand in that patient room, gowned, gloved, masked and shielded and to be the last person to touch someone else’s love one because there loved one couldn’t be there,’ she said.

Dr Rochelle walensky was appointed director of the Centers for Disease Control and Prevention (CDC) by President Biden in December, ahead of the January 20 Inauguration.

Previously Dr Walenksy was the chief of the infectious diseases division of Massachusetts General Hospital.

However, her primary focus was in HIV/AIDs – a background she shares with Dr Anthony Fauci.

She admitted in a speech responding to her appointment to the CDC that she never intended to go into public service.

Instead, made a name for herself by improving HIV screening and treatment in South Africa, as well honing trial design in the U.S.

Her appointment was met with enthusiasm from many doctors, but some were incredulous because she had never held office.

However, she has not managed to entirely eliminate the communication gaffs and pattern of conflicting information from various parts of the White House.

While Dr Walensky hinted in February that the CDC would not require teachers to be vaccinated in order to reopen schools, White House press secretary Jen Psaki said shortly thereafter that this was not the case.

Dr Walensky has mostly remained measured throughout the pandemic, but broke her typical calm to make a more dramatic pleas with the American public on Monday.

‘I know that feeling of nausea when you read the crisis standard of care and you wonder if there are going to be enough ventilators to go around and who is going to make that choice.

‘And I know what it’s like to pull up to the hospital every day and see the extra morgue.

‘I didn’t know at the time when it would stop. We didn’t have the science to tell us. We were just scared.’

Dr Walensky pointed at the fourth suge that is now in full swing in countries like Germany, Italy and France. She said that the trends in cases, hospitalizations and deaths in those countries looked

She issued a plea with Americans to redouble their efforts to slow the spread of COVID-19 and to encourage their friends families and social networks to do the same.

‘We are not powerless, we can change the trajectory of the pandemic, but it will take all of us recommitting to following the public health prevention strategies consistently, while we work to get the American public vaccinated,’ Dr Walensky said.

‘I am calling on every one of you to sound the alarm, to carry these messages into your community and your spheres of influence. We do not have the luxury of inaction.

‘For the health of our country, we must work together now to prevent a fourth surge.’

After hovering for weeks at about 50,000, the seven-day rolling average of new Covid cases in the U.S. is now more than 63,000, with 43,694 new infections recorded Sunday, according to Johns Hopkins University data.

More than half of states saw new cases rise by more than 10 percent last week, compared to the preceding week, and Michigan officials say the surge dreaded nationwide is already upon the state.

Another 506 Americans died of COVID-19 on Sunday.

Dr Anthony Fauci has echoed Dr Walensky’s concerns, callin the the easing of pandemic restrictions ‘premature’ and warned of the potential for another U.S. surge in COVID-19 as cases spike New York and New Jersey, signalling another wave could be about to crash.

‘What we’re likely seeing is because of things like spring break and pulling back on the mitigation methods that you’ve seen. Now, several states have done that. I believe it’s premature,’ Dr. Fauci told CBS News’ Face The Nation on Sunday.

New York has taken gradual steps to reopen, such as expanding indoor dining capacity and reopening movie theaters, but has not moved as dramatically as other states such as Texas and Mississippi.

Nonetheless, New York is seeing one of the steepest increases in new Covid cases in the nation, with more a seven-day rolling average of 8,500 as of Sunday. 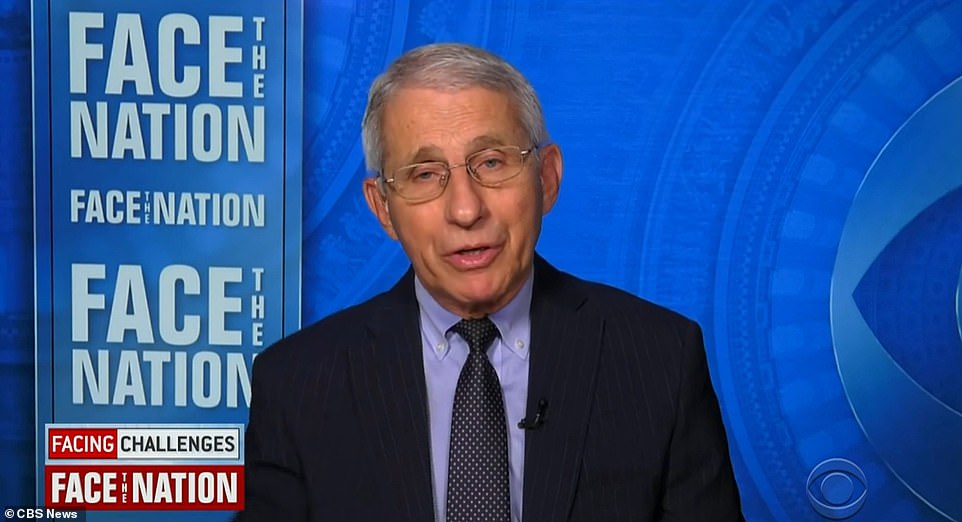 Dr. Anthony Fauci has called the easing of pandemic restrictions ‘premature’ and warned of the potential for another U.S. surge in COVID-19 as cases spike in New York 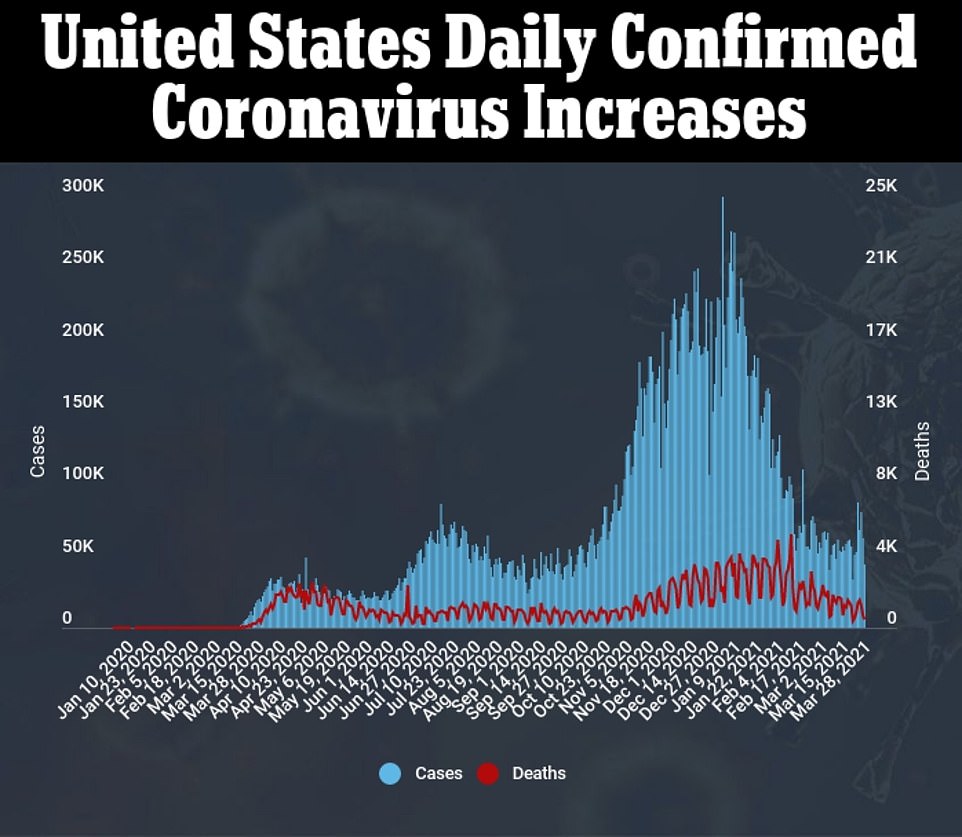 Fauci, the nation’s top infectious disease expert, has long taken a cautious attitude toward easing restrictions on business and social life, and once again warned that a dangerous surge could be around the corner.

‘When you’re coming down from a big peak and you reach a point and start to plateau, once you stay at that plateau, you’re really in danger of a surge coming up,’ said Fauci.’

‘And unfortunately, that’s what we’re starting to see.’

‘What we’re likely seeing is because of things like spring break and pulling back on the mitigation methods that you’ve seen,’ he said.