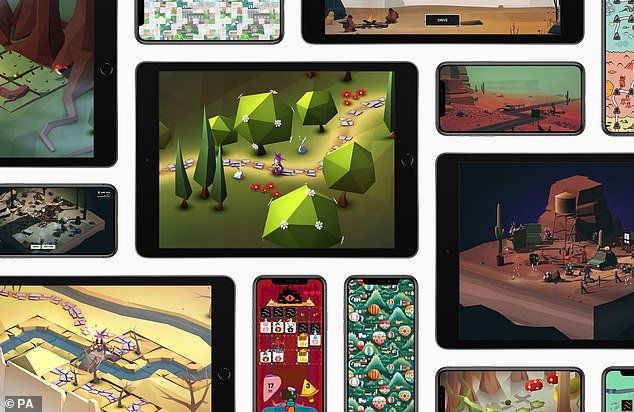 Apple Arcade is a subscription-based gaming service that launched in 2019Apple is updating its Arcade library, taking the total to more than 180 gamesAlongside the new titles, Apple announced the introduction of two new categories; Timeless Classics and App Store Greats

By Shivali Best For Mailonline

More than 30 games have been added to Apple’s gaming platform in a major update to the service.

NBA 2K21 Arcade Edition, Star Trek Legends and The Oregon Trail are among the new titles being added to Apple Arcade, taking its library to more than 180 games.

Apple Arcade is the tech giant’s subscription-based game service, where for £4.99 a month players gain access to a library of mobile games on their Apple device, with no adverts or extra in-app purchases required.

What is Apple Arcade?

The platform live as a tab inside the App Store and gives users access to more than 100 new and exclusive games, the firm says.

Games can be played across iPhone, iPad, Mac and Apple TV. And, users can able to pick up where they left off on a different device.

The service was announced in March 2019 and launched in September that year.

Launched in 2019, the service has become the home of a number of exclusive mobile games as well as popular downloads first found on the App Store.