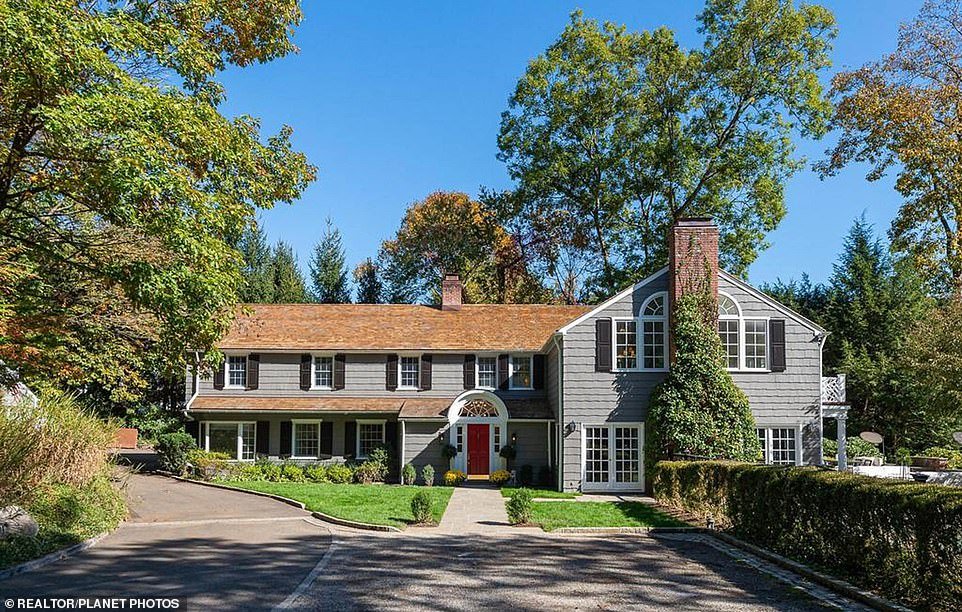 Bethenny Frankel is hoping to enjoy the lucrative benefits of flipping houses, after listing her five-bedroom estate in Greenwich, Connecticut, considered to be one of the richest cities in America.

The former Real Housewives of New York star is upselling her home after putting it on the market for an eye-watering $3,375,000, having only just purchased it last year for $2,100,000.

Bethenny, 50, – who has a new HBO Max competition show titled The Big Shot With Bethenny – is said to have renovated and redecorated the house herself, putting her own unique spin on the finished project – and is hoping to snag a $1,250,000 profit from the process of it all.

Love it or list it: Bethenny Frankel has flipped her five-bedroom Connecticut mansion by listing it for $3.75M… over a MILLION more than what she paid for it just last year

The suburban-looking property is two-stories and 4,698 square feet, surrounded by lush greens and designer landscape gardening that is commonplace in the wealthy area. 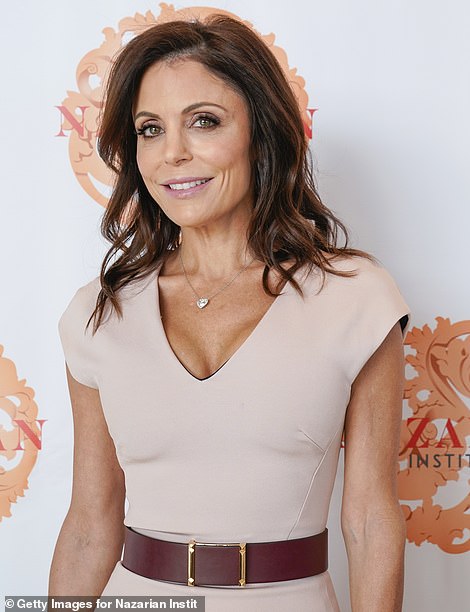 Will her hard work pay off? Bethenny (pictured above in 2019) has renovated the home herself

Other selling points in the grand setting include a master suite that comes with vaulted ceilings, a fireplace, seating area and a private balcony.

The master bath is said to feature very fancy components including a walk-in shower, a freestanding bath and double bathroom vanity sinks.

There is a large oval-shaped swimming pool in the 2.1-acre backyard that appears to have been untouched by Bethenny’s renovations, as well as a spacious outdoor patio and seating area with smart-looking sun loungers on display.

According to the official listing from Jeffrey Jackson of Centric Property Group, Bethenny’s hard work of updates include a new kitchen, mud room, glam room and freshly placed mechanicals and lighting fixtures.

The home has been converted to gas and has a new boiler and hot water heater and is being billed as a ‘turn-key luxe retreat located within minutes of downtown Greenwich’ that also boasts lots of privacy.

Bethenney’s renovations is said to have given the house a new flow, which has been ‘transformed and rebalanced to produce a refined yet casual experience’.

Then, an adjoining family room with black granite fireplace and wet bar is connected by large glass doors to the chic living room. 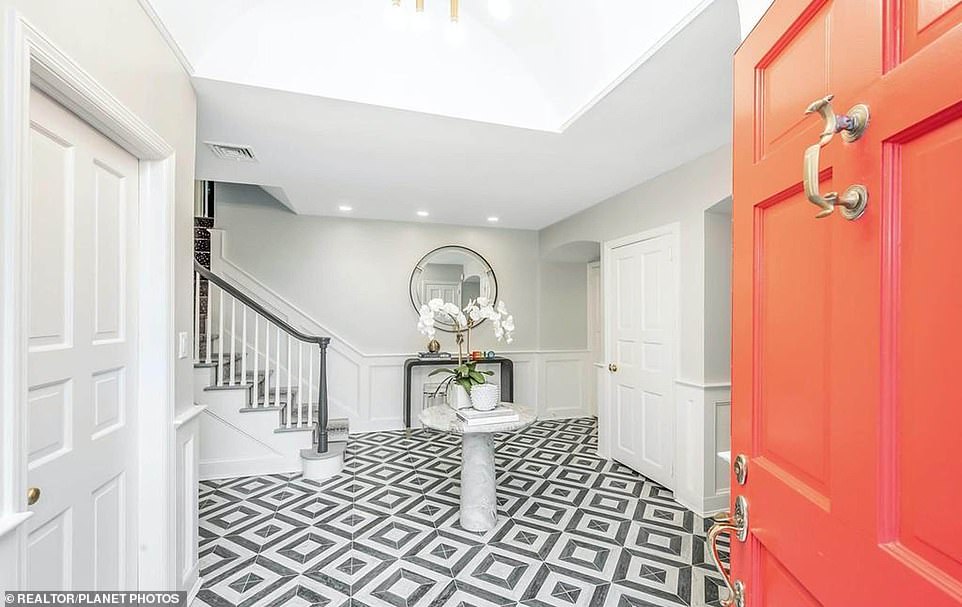 Welcome: The ‘turn-key’ property boasts a whole new design courtesy of Bethenny herself who has reimagined the property, that was originally built in 1945 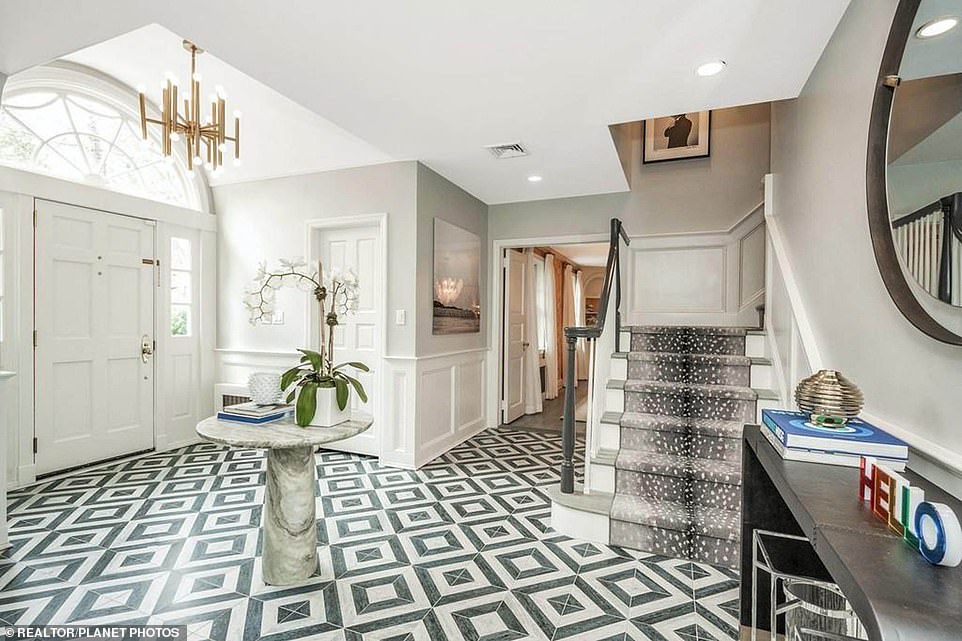 Ultra-modern: The home is described as ‘Colonial-style’ on the real estate listing, but the ex-RHONY star has put a modern spin on things 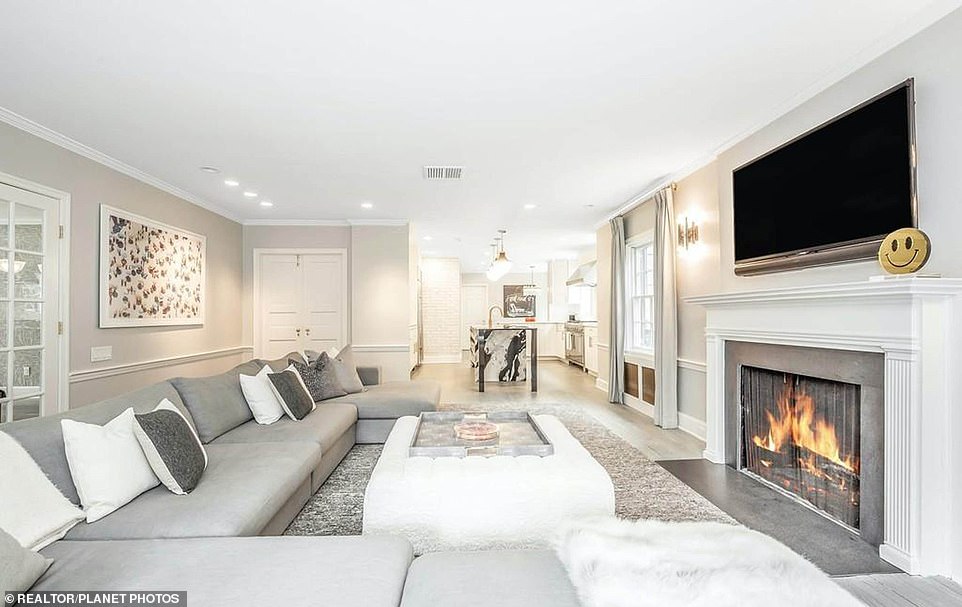 Luxury living: The open-space living room that leads in from the kitchen features a cosy fireplace with sleek surroundings 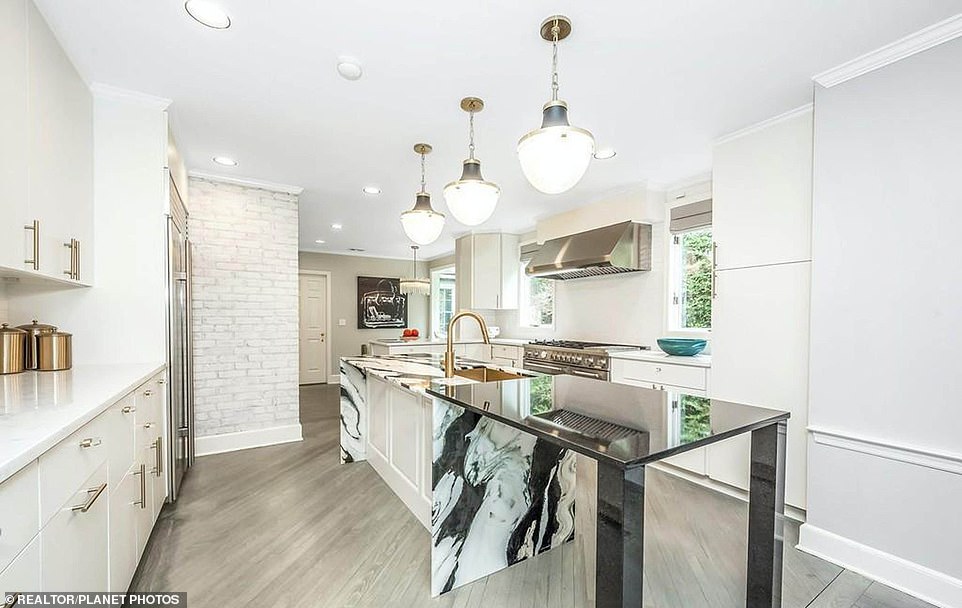 Making a meal out of it: The ex-RHONY went to town on redesigning the kitchen into a very sleek-looking space with marble table tops, exposed white brick walls and new designer light fixtures

Other notable features include French doors in the living room, a formal dining room, a pull-down attic with storage space, and a partial basement.

Described as ‘Colonial-style’ on the website, the property was first built in 1945, though Bethenny’s most-recent updates have transformed the home into a much more modern-looking space.

The Skinnygirl entrepreneur appears to be on somewhat of a roll lately when it comes to selling properties.

She recently sold her luxury condo in New York’s pricey Soho neighborhood for $3.65million, as well as a home in Bridgehampton, N.Y., for $2.28 million, according to The Dirt. 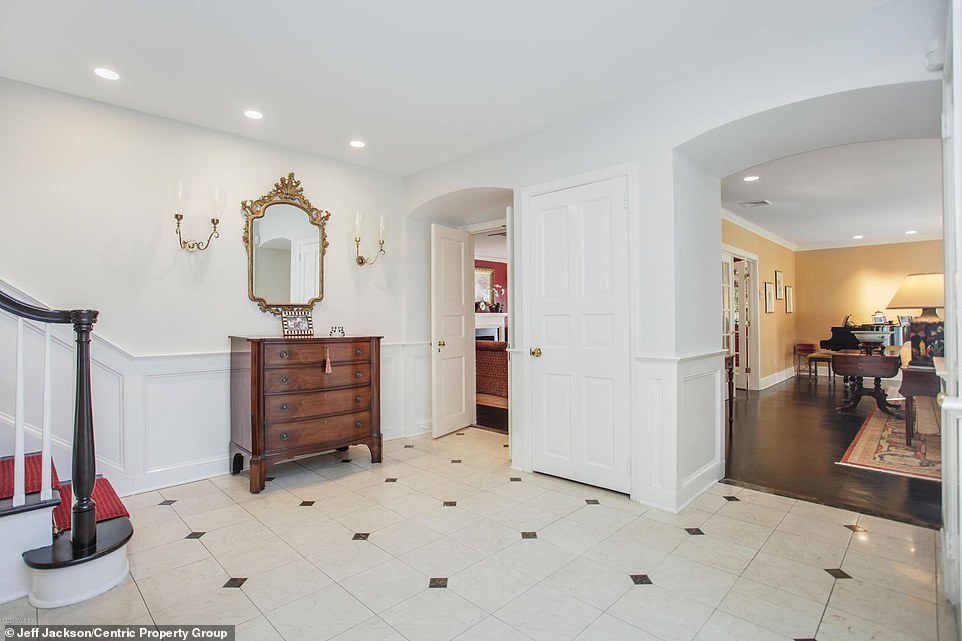 What it looked like BEFORE: This snap of what the home looked like before Bethenny got her hands on it shows a very different view, with outdated tiling and a red carpet on the staircase as well as antique-style furniture 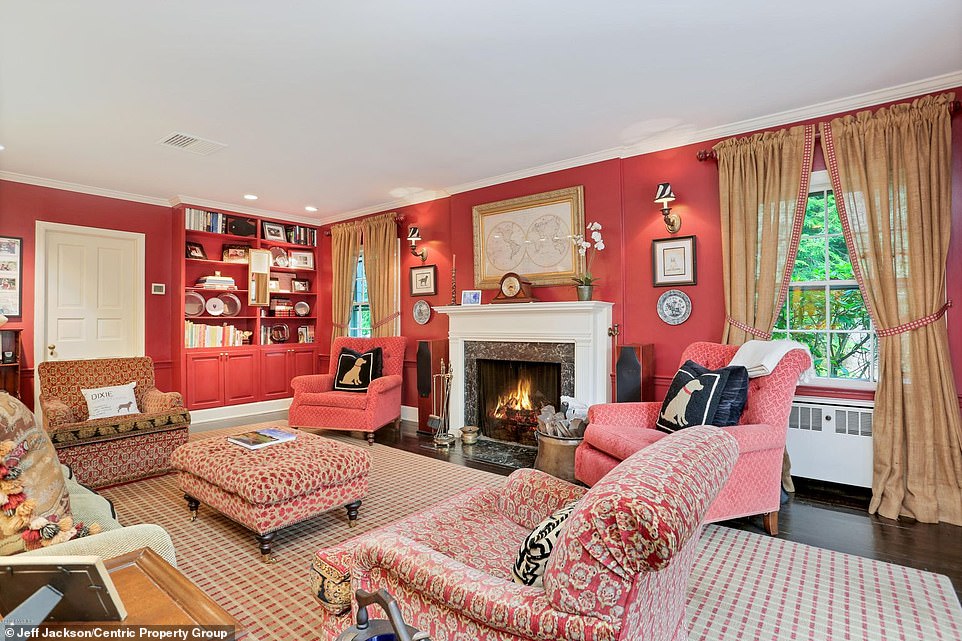 Chintzy: Another ‘before’ picture from the home shows a very traditional-looking living room, classic fireplace, wooden floors and a strong red theme on the walls and furniture 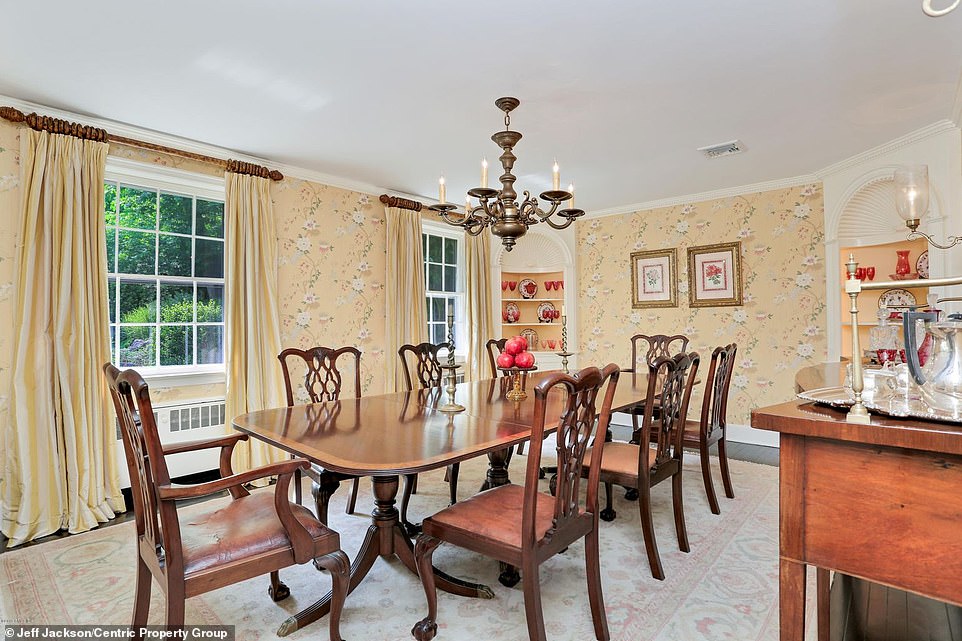 Out with the old: The original dining room featured floral wallpaper and a classic dining room table and chairs setup 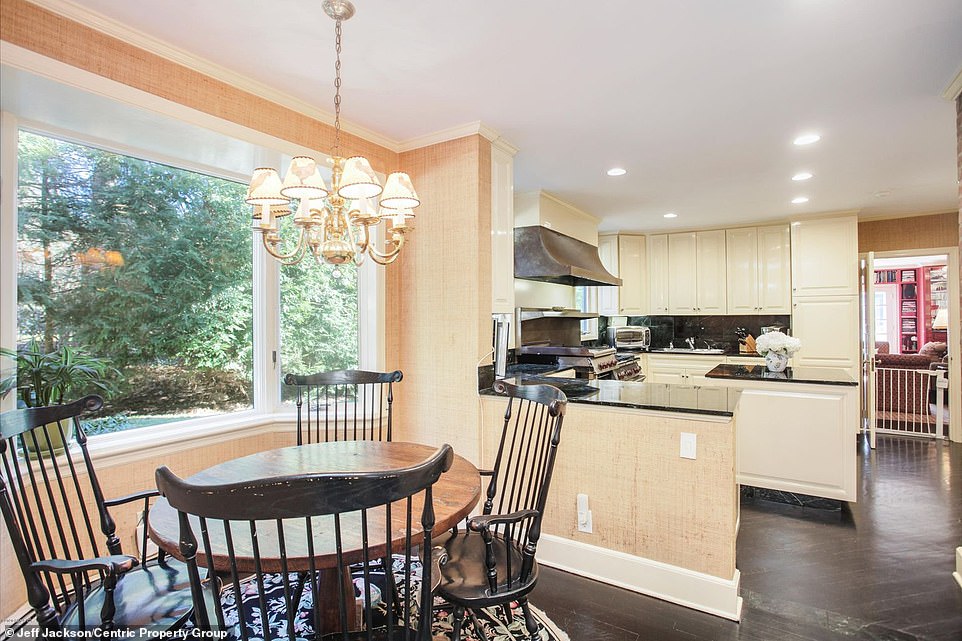 Drab: The original kitchen certainly looked as though it have done with a bit of TLC, and Bethenny clearly accepted that challenge

Meanwhile, in her personal life, Bethenny has much to celebrate right now after getting engaged to her boyfriend Paul Bernon.

Perhaps the star is now on the lookout for a new home for a fresh start with Paul. 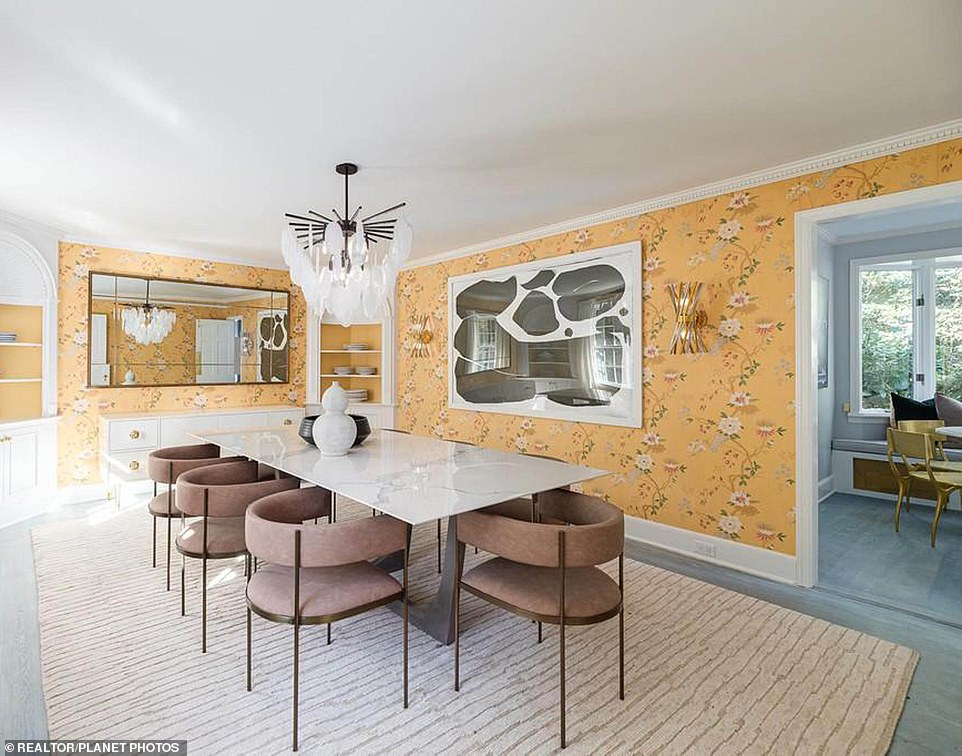 What it looks like NOW: The living room has been completely remodeled by Bethenny with chic dining room chairs a marble-top table with sleek new light fixtures, though it appears she decided to keep hold of the floral-themed wallpaper 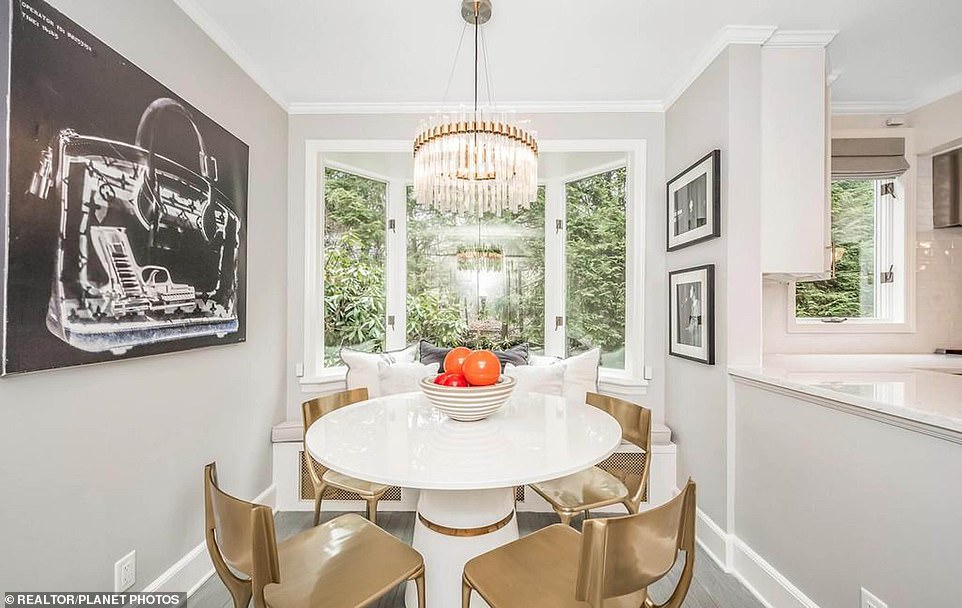 Luxe: The overall style of the reality star’s renovations appears to be chic and airy with some flair, including these gold kitchen chairs 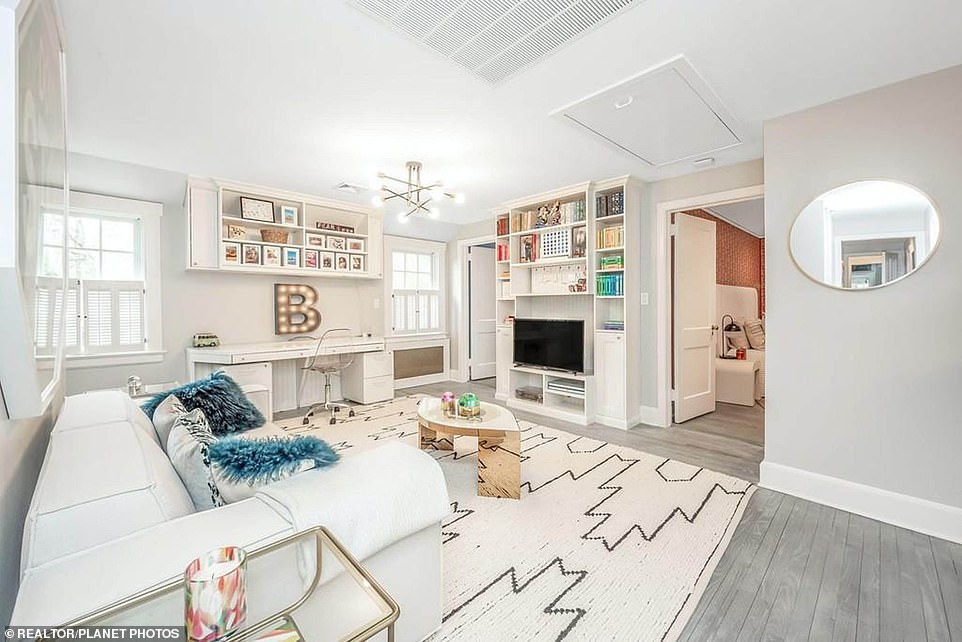 Master bedroom: The spacious property also features a seating area near the bedroom which has been completely made over

Bethenny is well-known for her love of the Big Apple, but she still doesn’t know whether her nuptials will take place in the city or not.

Bethenny is excited about the new season of The Real Housewives, but she suggested she’s unlikely to make a return.

She said: ‘I don’t really believe in going backwards. I don’t want to go back on Housewives. It’s not where I am right now. I respect that I came from there… I’m moving forward.

‘I’m launching my own show on HBO MAX, The Big Shot with Bethenny, and my podcast B with Bethenny has a big announcement coming this week.’

Bethenny insisted she’s been focused on her new projects since she walked away from the show.

She explained: ‘Leaving the show was something that I just, in my gut, I thought I should do. I was looking several steps forward.’

However, it hasn’t always been straightforward for the loved-up duo, as they split briefly last year.

‘And I’ve just realised more in life, with people being more open and honest about their lives and what they want, that everything doesn’t have to end in a blue box and a bow.’