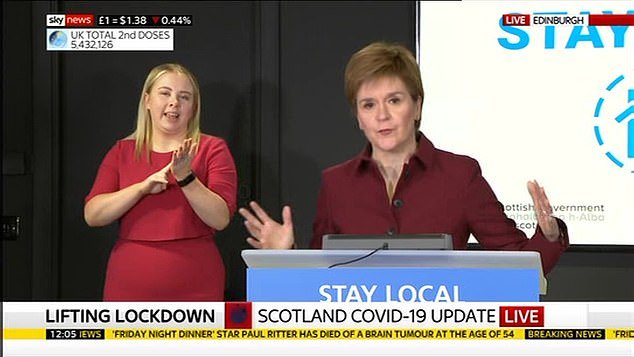 Nicola Sturgeon stole a march on Boris Johnson today as she revealed that the first consignment of the eagerly-awaited Moderna vaccine has arrived in the UK.

Her surprise announcement at lunchtime came as UK government figures said it would be another two weeks before it was ready to be rolled out, without confirming whether supplies had arrived or not.

Vaccines Minister Nadhim Zahawi said this morning the first batch of the jab — which which uses mRNA technology such as Pfizer’s and was approved by regulators in January — was set to be ‘deployed’ in the third week of April, with ‘more volume’ expected in May.

Ms Sturgeon’s revelation raises questions over whether the Moderna supplies for the rest of the UK have also arrived and if there is a two-week delay in their introduction.

The UK has ordered 17million doses, if which more than a million are due to be delivered to Scotland.

But the First Minister today said its arrival would not speed up the country’s vaccine  rollout as the doses had already been factored in to projections.

In a televised address today, Ms Sturgeon said: ‘I can confirm that the first batch of the Moderna vaccine arrived in Scotland safely yesterday. 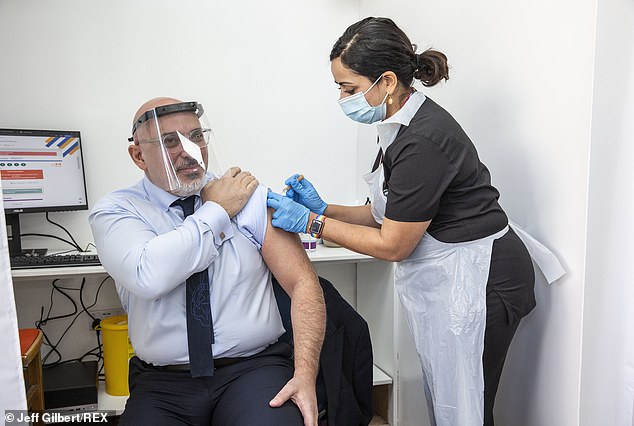 Vaccines minister Nadhim Zahawi pictured receiving his Covid jab. He said today they are expecting the first doses of the long-awaited Moderna jab to arrive this month

WHICH VACCINES ARE BRITAIN USING? AND HOW EFFECTIVE ARE THEY?

How it works: mRNA vaccine – Genetic material from coronavirus is injected to trick the immune system into making ‘spike’ proteins and learning how to attack them.

How it works: Adenovirus vaccine – To make the vaccine, the common cold virus is genetically modified to trigger it to make the Covid spike protein — which the virus uses to invade cells.

When the vaccine is administered the patient’s immune system attacks the spike protein by building antibodies, priming it to fight off Covid before it leads to an infection.

How it works: mRNA vaccine – both Moderna’s and Pfizer and BioNTech’s vaccines work in the same way.

* the latest data goes up to March 21

** data taken from a US study, joint with Pfizer. Other real world data comes from Public Health England in the UK

‘A total of 17million doses of this vaccine have been ordered for the UK and of that total Scotland will receive well over a million doses.

‘It’s important to stress though that Moderna vaccines will arrive over a period of months, not all at once.

‘The doses we expect to receive are already factored into our forward projections. So the arrival of this first batch doesn’t mean that we are able to accelerate the vaccination programme. The speed of vaccination is already taking account of the expected Moderna supplies.

‘Nevertheless the fact that we now have three vaccines in use is clearly very welcome and it does give us additional security of supply, which is important.’

Earlier, announcing the impending arrival of the Moderna vaccine, Mr Zahawi told BBC Breakfast: ‘It will be in deployment around the third week of April in the NHS and we will get more volume in May as well.

‘And of course more volume of Pfizer and Oxford/AstraZeneca and we have got other vaccines. We have got the Janssen — Johnson and Johnson — vaccine coming through as well.

The numbers of Covid-19 patients in hospital in Scotland has fallen to 196, the First Minister revealed.

She told a Scottish Government coronavirus briefing this figure is 19 fewer than when it was last provided before the Easter break.

Of these patients, the number in intensive care remains the same as prior to the Easter break at 21.

The welcome boost to the vaccine roll-out came as Valneva’s Covid jab — which has also been bought by No10 — was shown to trigger antibodies in all volunteers who received a high dose in early-stage trials.

Scientists testing the jab added they identified no safety concerns, and that it would now move to final phase three trials, with the view of submitting it for approval in the autumn.

Britain has already ordered 100million doses of the jab — which contains a destroyed version of the real coronavirus — which are being made in Scotland.

Health Secretary Matt Hancock heralded today’s results as ‘fantastic’ and showing a ‘strong immune response’. ‘This is another boost to British life science,’ he added.

Mr Zahawi said the results were ‘very promising’ and provided ‘renewed hope’ that a jab using an inactivated virus could spark immunity.

Bosses of Valneva, which is headquartered in France, added they were also looking at ways to tweak their jab to protect against future variants, which may be able to dodge immunity.

More than 31million Brits have already received their first dose of either AstraZeneca or Pfizer’s Covid vaccine, which were the first to be approved in the UK.

Ms Sturgeon also confirmed schools in Scotland will reopen fully after the Easter break, weeks after they went back in England.

Speaking at the coronavirus briefing in Edinburgh, she said: ‘Having assessed the data with the input of our clinical advisers, when the Easter holidays end virtually all pupils will return to school full time, so secondary schools after Easter will go back to in-person, full-time learning.

‘The one exception to this is children that are on the shielding list, we are continuing to recommend that they stay at home until April 26 and that’s in line with the advice already received from the chief medical officer.’ 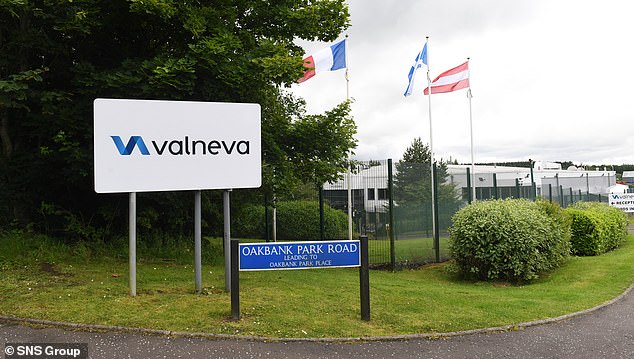 It came as Valneva said its Covid vaccine was 100 per cent effective at triggering antibodies among all those who received a high dose. It will now move to phase 3 trials

Ms Sturgeon added: ‘This, I know, will be a huge relief to many children and young people and of course to many parents and carers and as I said a moment ago, by the end of April we want to see children on the shielding list get back to school in person as well.’

The First Minister also confirmed she would follow England’s lead and provide two Covid tests a week for Scots.

She said the lateral flow tests, which give quicker results but are considered to be less sensitive than the PCR tests in use for those with symptoms, will be available universally.

More details of the programme will be announced later this week, she told the coronavirus briefing in Edinburgh.

The First Minister said: ‘This testing will be in addition to and will supplement the additional testing routes that are in place in priority areas.’

She added: ‘This more universal approach to asymptomatic testing will allow us to assess the impact that might have on further suppressing transmission.’

Similar tests are currently available to school staff and secondary school pupils, health workers and in some workplaces, such as food processing plants, and some particularly hard-hit areas have had universal testing rolled out.

The First Minister said the expansion would be on top of the current offering of lateral flow tests and it was important that those who were able to take up testing currently continued to do so.

She added: ‘What I’ve set out today is in addition to this, which will be anybody in the population can access lateral flow testing twice a week if they want it.

‘So you don’t have to be symptomatic, in fact this is about trying to pick up more asymptomatic cases and again it’s just about extending the reach of testing to see what impact that has on driving down transmission.’

Ms Sturgeon said the decision had been taken to expand testing because of ‘greater confidence’ in the stocks being available to carry out the tests.

But she added that testing should not be seen as a ‘substitute’ for following the current restrictions.

‘You might test yourself one day and be negative, you could still be incubating the virus and it doesn’t show up on the test, or you could test negative, go out your front door and meet somebody that passes the virus to you,’ she said.

‘It doesn’t mean you can throw caution to the wind and just live completely normally.

‘It’s got a big part to play, but it’s really important that we don’t talk about testing in a way that encourages people to stop taking all of the other precautions.’

Douglas Ross has said Scotland should take a faster route out of lockdown, saying all public health data was pointing towards a quicker reopening.

The Scottish Conservative leader wants to see restrictions currently planned to end on May 17, lifted on 26 April instead.

These include indoor openings of pubs and restaurants with a 10.30pm closing time, cinemas subject to capacity restraints and blended learning for universities and colleges.

Mr Ross pointed to the progress of the vaccine programme, with more than 2.5 million Scots receiving their first dose, and falling numbers of people in hospital.

Speaking on Tuesday, he said the Scottish Conservatives still advocated a ‘cautious approach’ which took account of international examples.

He said Scotland’s seven-day test positivity level, currently at 2.5 per cent, was ‘well below’ the WHO’s threshold of 5 per cent for keeping the epidemic under control.

Mr Ross said: ‘You just have to look at those in hospital at the start of March compared to the start of April.

‘So all the public health evidence here in Scotland is encouraging and I believe allows us to cautiously start to reopen Scotland quicker than has previously been outlined.’

He said delaying the reopening of society would lead to greater damage to health and wellbeing.