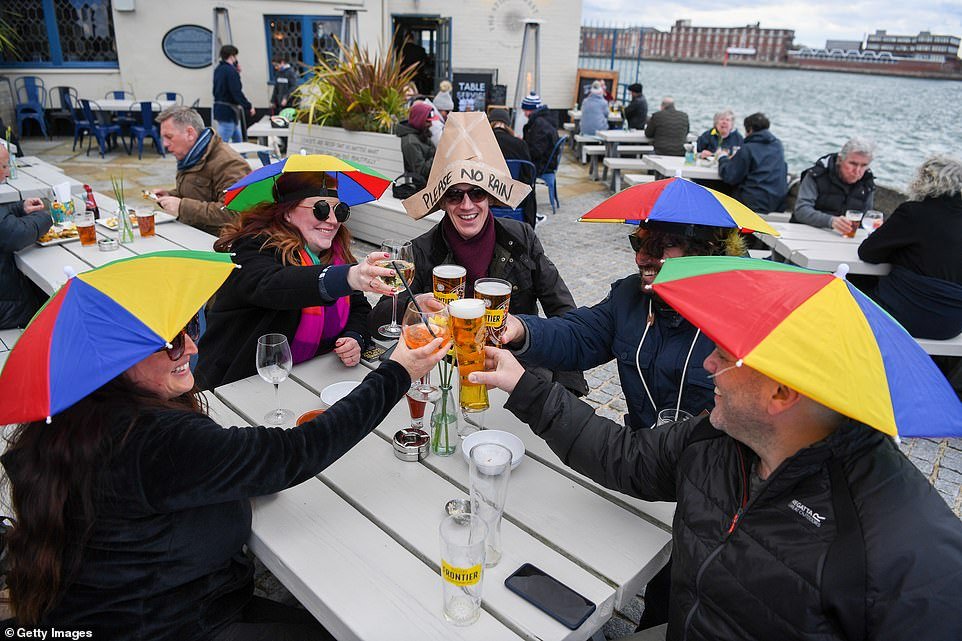 Daily Covid cases have jumped by nearly a third in a week, official figures revealed today in the first sign that England’s four-day Easter weekend may have fuelled a spike in transmission.

Department of Health bosses posted another 3,568 positive tests across the UK – the highest daily toll since April 1. Deaths have halved since last Monday, with 13 more victims recorded today.

England – which took its next cautious step to freedom today by allowing pubs and restaurants to reopen to customers outdoors – saw an increase in cases but no trend was visible in Scotland, Wales or Northern Ireland, which all have different restrictions enforced.

Number 10’s scientific advisers have always warned easing restrictions would cause coronavirus infections to rise by allowing people to mix together but because millions of people have been vaccinated, the NHS shouldn’t be overwhelmed.

But experts tracking England’s outbreak say none of the planned steps taken so far – reopening schools on March 8 and dropping strict stay at home guidance on March 29 – have caused any noticeable problems.

Today’s spike in infections can’t be blamed on hardy drinkers choosing to brave the snow and hailstones to celebrate the ‘Glorious Twelth’ in beer gardens across the country.

Instead, experts say it is ‘entirely possible’ the U-turn in the figures could be down to the Easter bank holiday. It takes up to seven days for people to show symptoms of Covid and get their test results back.

Revellers last weekend flocked to parks to bask in the sunshine and enjoy the first weekend of England’s eased restrictions to make the most of the rule of six to see family and friends.

Dr Simon Clarke, an infectious disease expert at the University of Reading, said the daily figure were an important reminder that the numbers are not ‘guaranteed to go down’ and that timing-wise the spike coincided with Easter.

The rise may also be explained by recording delays, with testing numbers known to dip on public holidays due to the way swabs are recorded and because fewer people come forward for them. 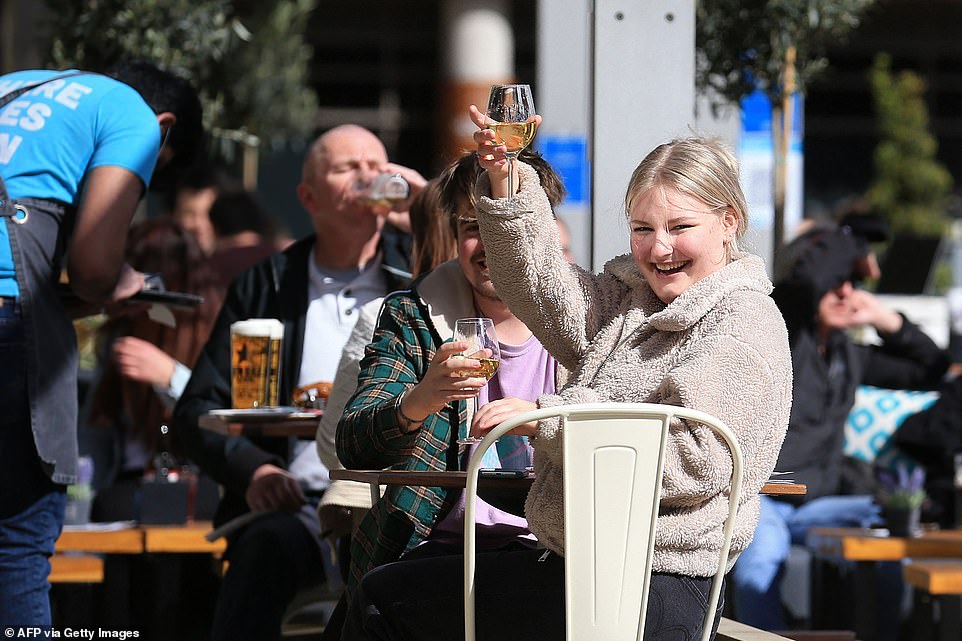 I’ll drink to that! Customers enjoy glasses of white win as they sit at outside tables as at a re-opened pub in Leeds, West Yorkshire 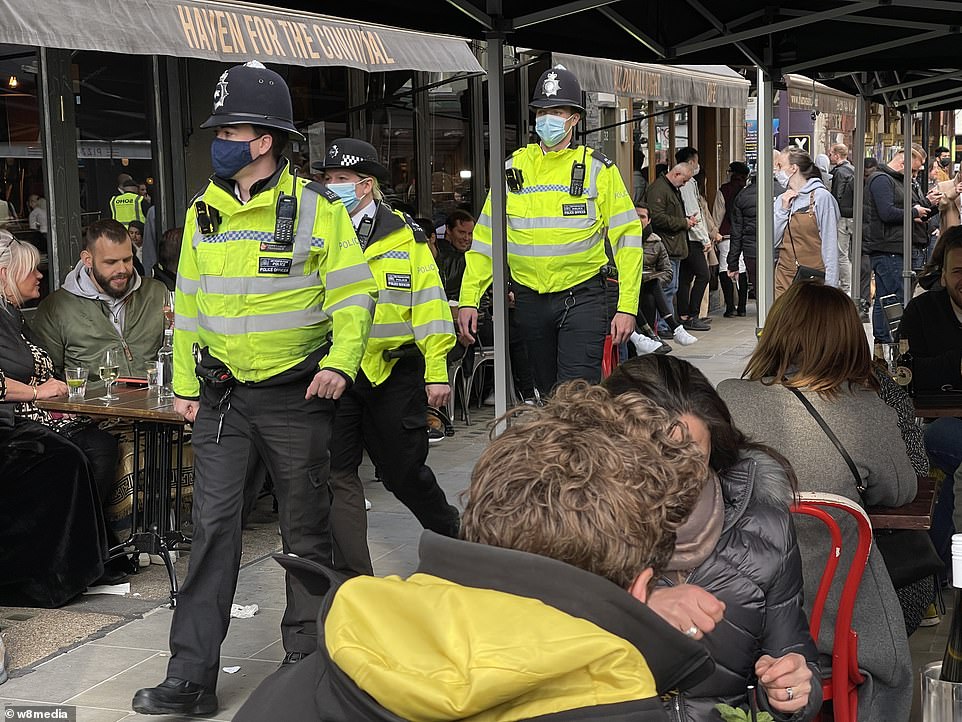 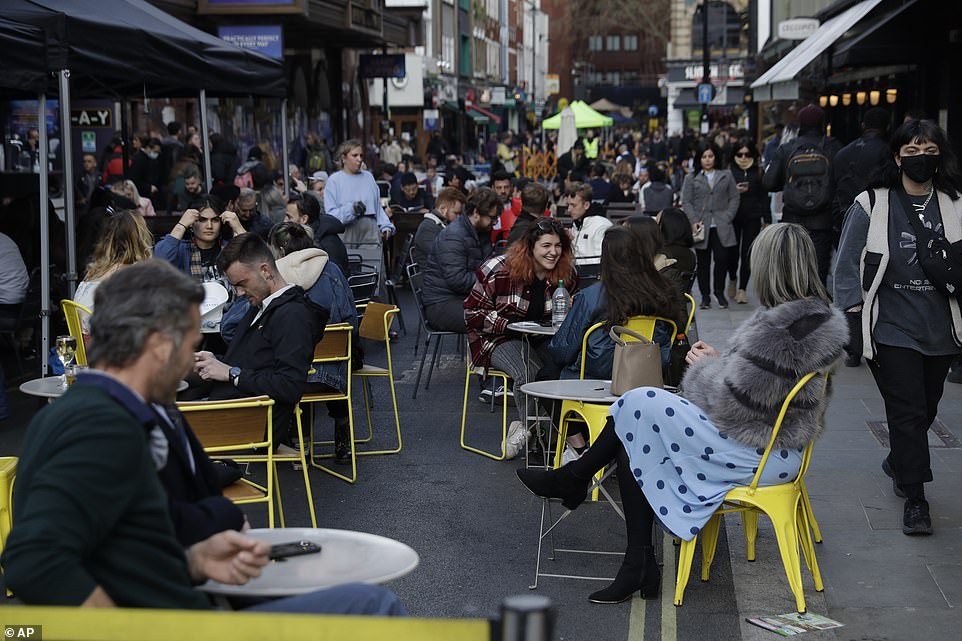 Busy: People sit at outdoor tables setup today for drinks to be served in the Soho area of central London, on the day some of England’s third coronavirus lockdown restrictions were eased 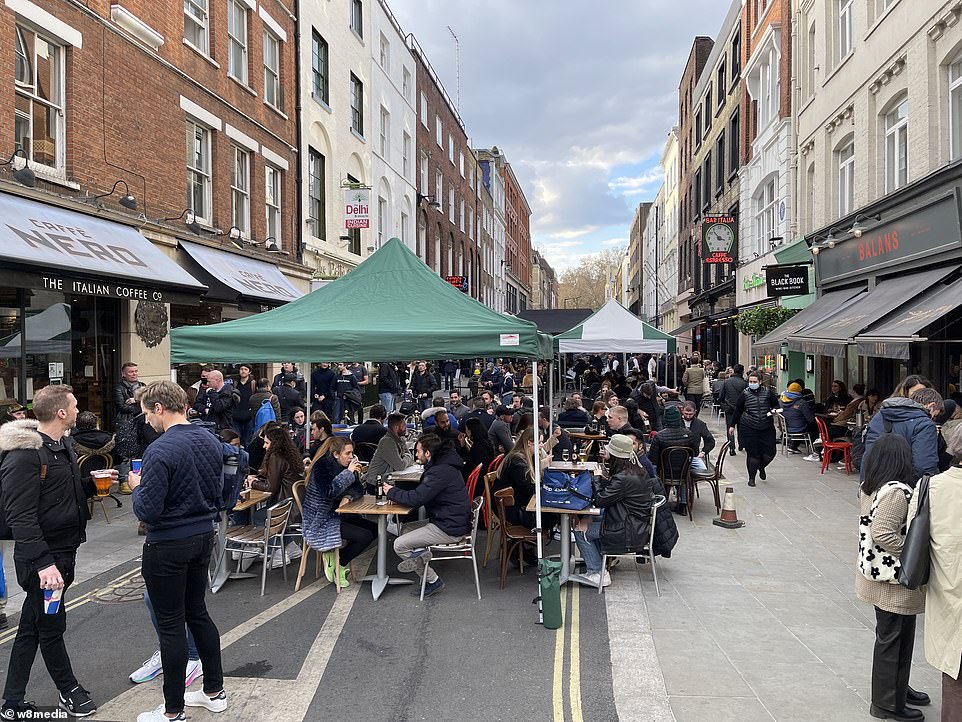 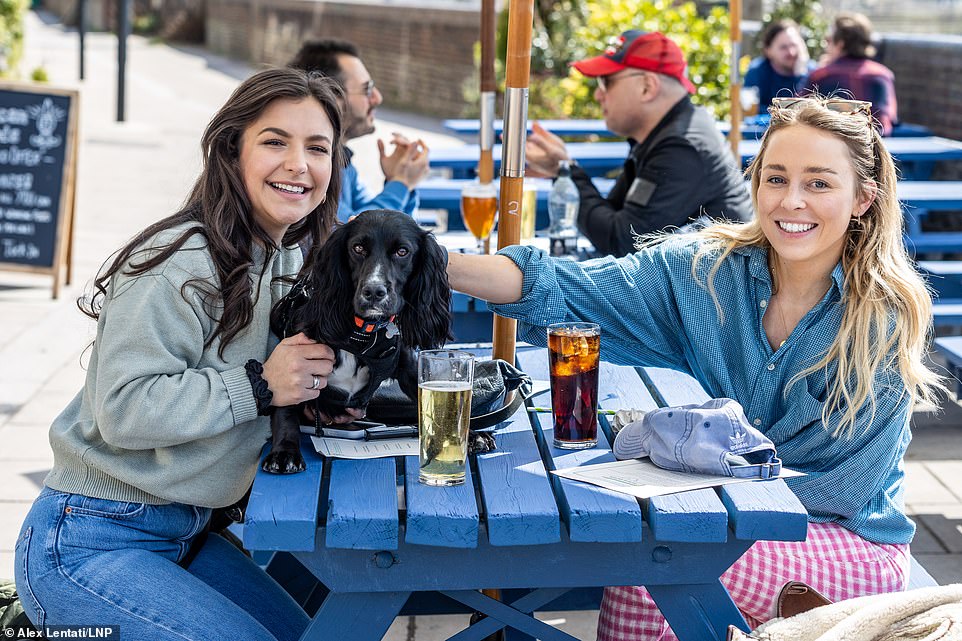 As England basked in sunshine this afternoon, pub goers Gabriella Lucena, 24, (left) and Gabrielle West, 28, (right) enjoyed a pint and a soft drink by the Thames at Hammersmith, West London with one-year-old Cocker Spaniel Lola 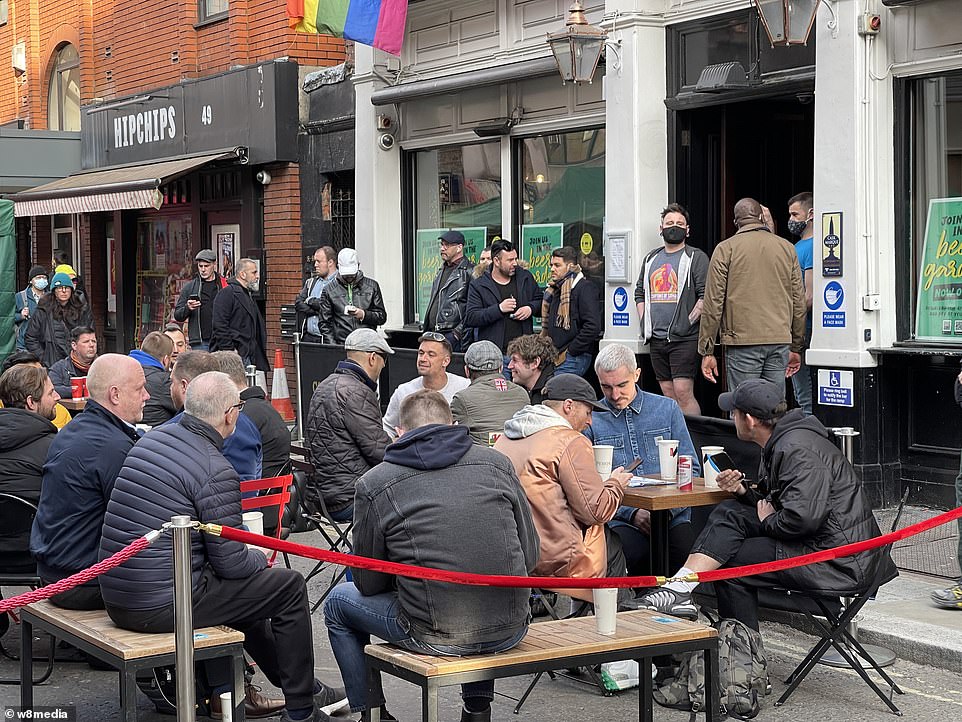 Soho, west London: Britons are enjoying the return of some freedoms with many taking the opportunity to meet with friends 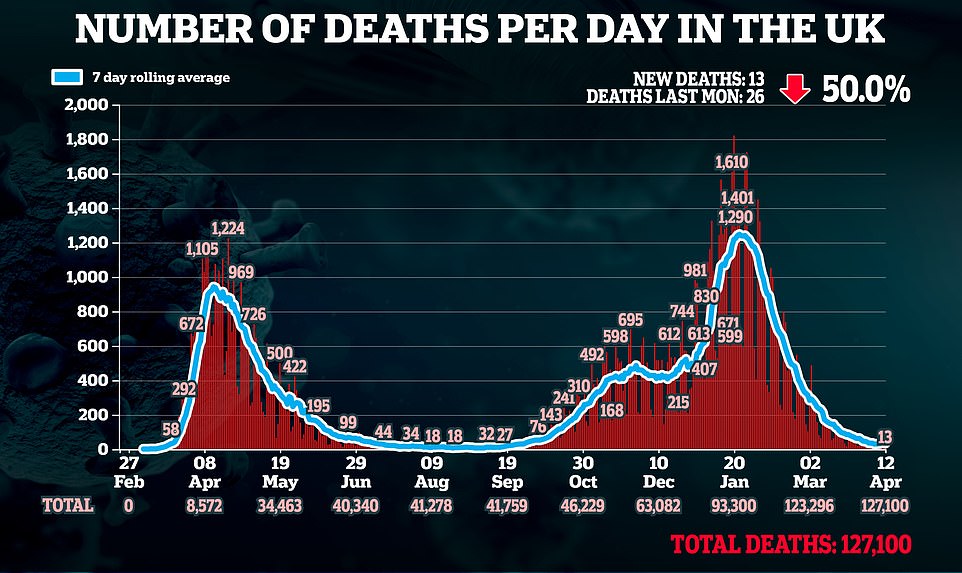 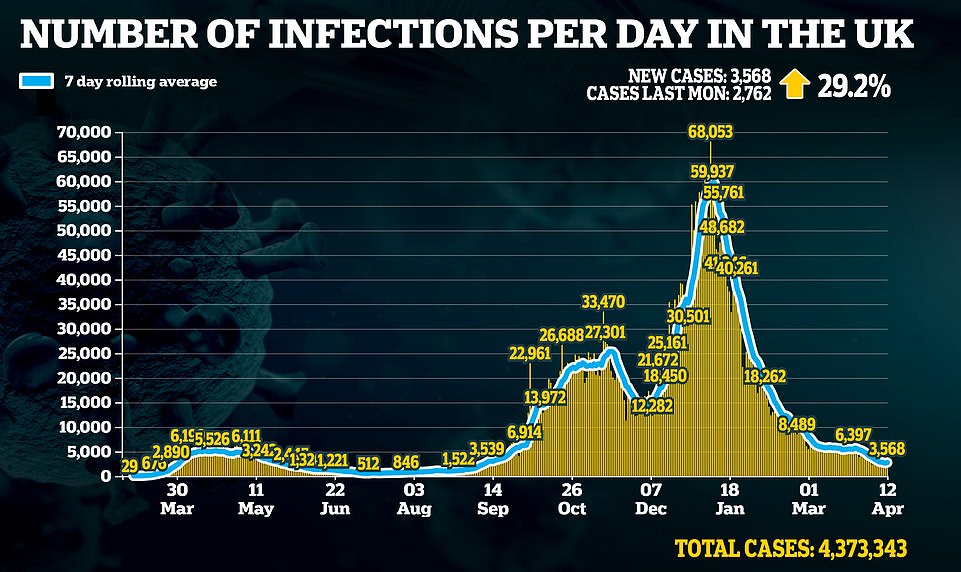 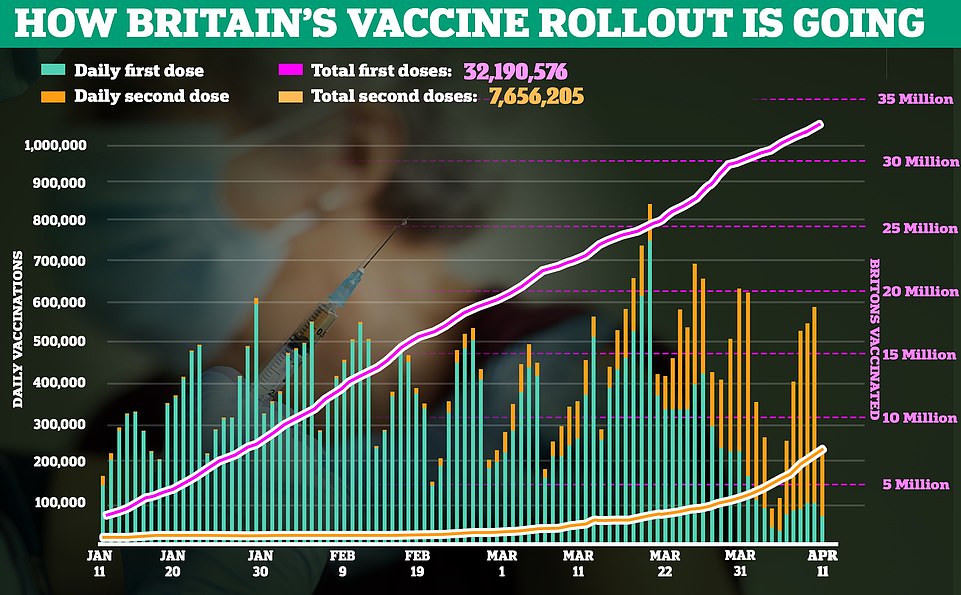 The ‘Glorious Twelfth’: What can you do from today? (And what do we still have to wait for?)

All non-essential shops will be allowed to reopen, as will hairdressers, beauty salons, gyms and swimming pools, with no group classes allowed.Pubs, restaurants and cafes can reopen for outdoor service, but will have to wait until at least May 17 to serve customers indoors.Mass testing to be available, with everyone urged to take two tests per week.New care home rules will allow residents to have two visitors, rather than just one.Self-catering accommodation, including campsites, can reopen, but hotels and B&Bs must remain closed until at least May 17.Shops will be allowed to stay open until 10pm, six days a week, in a bid to reduce crowding.The maximum number of people allowed to attend weddings and wakes will rise from six to 15.Public buildings can reopen, as can outdoor attractions such as theme parks and zoos.Controversial hospitality rules such as the 10pm curfew and requirement to buy a ‘substantial meal’ with alcohol will be dropped.Clothes shops will be allowed to reopen their changing rooms for the first time in more than a year.

Until May 17 at the earliest: Gatherings of up to 30 people outdoors, with the rule of six and two-household rule indoors; pubs and restaurants will reopen indoors; and controlled indoor events of up to 1,000 people or 50 per cent of a venue’s capacity, whichever is lower, will be permitted.

Up to 30 people will be allowed to attend weddings, receptions, funerals, and commemorative events, including wakes. Indoor gatherings like exercise classes will be given the go ahead.

Until June 21 at the earliest: All legal limits on social contact will be lifted and nightclubs reopened.

In other Covid news today:

Footfall analysts Springboard say they are expecting a near 50% uplift during the first week;32,010,244 Britons have received the first dose of the vaccination, with a further 6,991,310 having had their second, as the UK recorded 1,730 new Covid cases – down a quarter on last week;Study by University College London (UCL) suggests that 73.4% of the population now have herd immunity either through vaccines or having had the virus;People in their 40s will be invited for Covid jabs from tomorrow after the Government hit its target on vaccinations for priority groups;Dr Mike Tildesley, reader in infectious disease modelling at the University of Warwick and government adviser, welcomed opening but warned up uptick in cases;Kate Garraway revealed her children are ‘absolutely loving’ having their father Derek home after his long Covid battle;England footballers James Maddison and Harvey Barnes were among five Leicester City players who ‘hid in the dark after manager Brendan Rogers caught them at a Covid lockdown-flouting party’;Officers apologised to churchgoers after shutting down their Good Friday service for breaking Covid lockdown rules;Students’ university comeback was delayed until mid-May amid fears mass return to lecture halls could spark a huge spike in Covid cases.

England’s lockdown was taken down another notch today, with Boris Johnson’s cautious roadmap back to freedom now allowing pubs and restaurants to finally serve customers again — albeit outdoors. Hairdressers, beauty salons and gyms were all also given the greenlight to open again.

Hardy drinkers across the country braved snow and hailstones to celebrate the ‘Glorious Twelth’ in beer gardens, and scores dashed to the pub to enjoy their first post-work pint in months.

Desperate shoppers were seen fighting to join queues for limited edition trainers and bargain clothes in popular stores, as they were allowed to open for the first time this year. While council killjoys forced some outdoor seating areas to close and investigated one venue over its long queue.

Temperatures dipped to -3C overnight before a snowy morning, and although temperatures have now risen they remain a crisp 7C in London, 8C in Manchester and 5C on the south coast.

The deepest snowfall in England today was at Little Rissington in Gloucestershire, which recorded 1.5inches (4cm).

As England basked in sunshine this afternoon more people revealed their plans for an after-work pint – if they could get a seat.

It comes amid confusion over what counts as a legitimate outdoor seating area, with some pubs ready for reopening told they would have to either close their beer gardens or reduce capacity.

Government guidance states that shelters, marquees, and other temporary structures with roofs must have half their walls open at all times to be classed as being outdoors.

However, councils are interpreting the rules differently, leading to outcry from some landlords and restaurant owners who have only just been told they supposedly breach the rules.