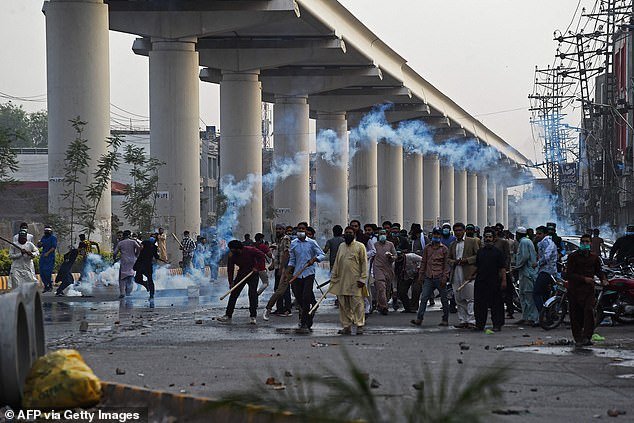 Thousands of protesters clashed with police in Lahore, Pakistan, during a demonstration against President Macron’s support for a magazine showing a ‘blasphemous’ Prophet Mohammed cartoon.

Anti-French sentiment has been simmering for months in Pakistan since President Emmanuel Macron‘s government expressed support for a satirical magazine Charlie Hebdo’s right to republish cartoons.

It comes as Saad Rizvi, leader of Tehreek-e-Labbaik Pakistan (TLP), was detained in Lahore on Monday, party officials said. 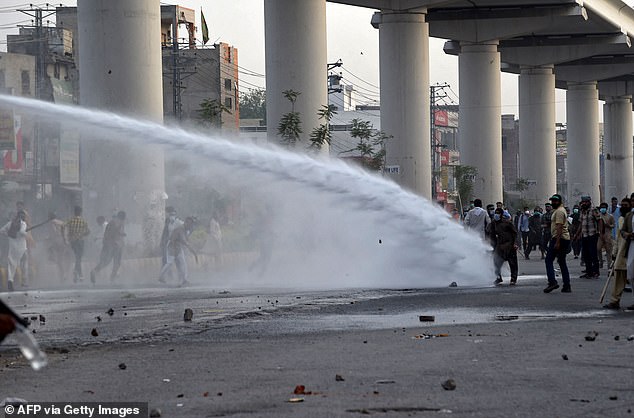 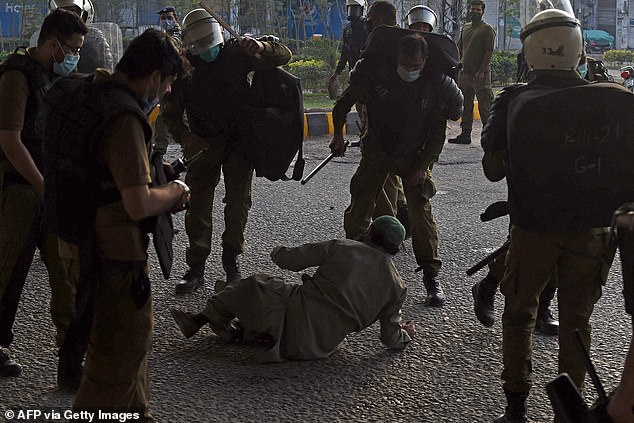 It comes as it was confirmed the leader of a far-right Islamist party was detained. Pictured: Police surround a Tehreek-e-Labbaik Pakistan activist

Police use tear gas and water cannon to disperse thousands of protesters who blocked streets and intersections in Lahore, the country’s second biggest city.

The party leader’s arrest was confirmed by police but they did not say on what charges.

He had been trying to organise a march on the capital on April 20 to demand the expulsion of the French ambassador.

Rizvi is the son of the firebrand cleric, and previous head of the TLP, Khadim Hussain Rizvi, who died in November. 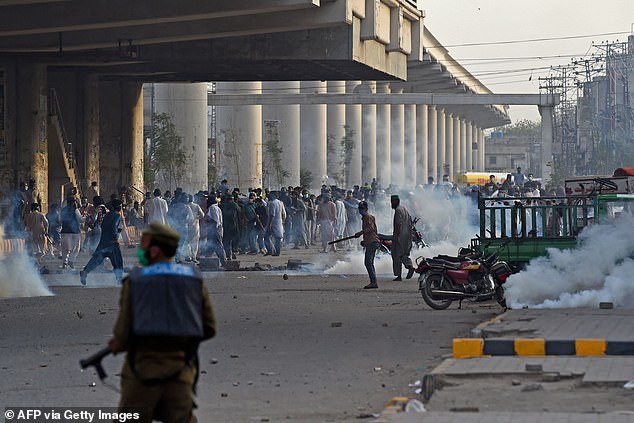 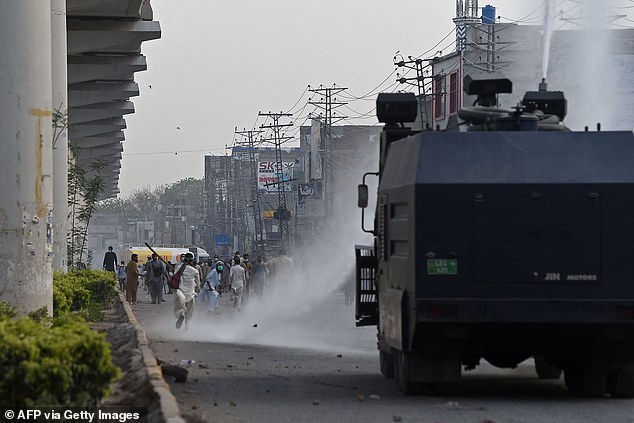 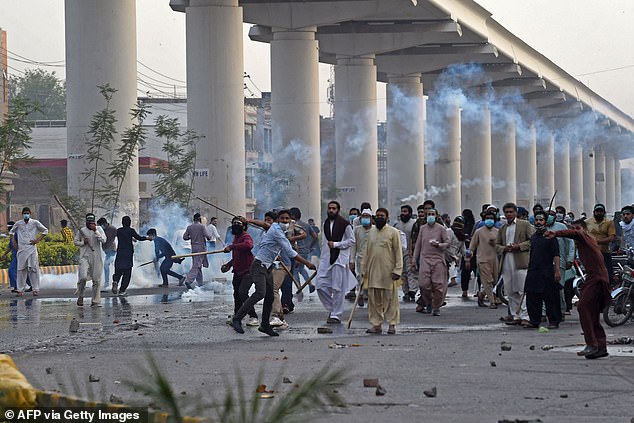 During the clashes, police were seen using tear gas and water cannons while protesters were brandishing what appear to be large sticks and some looking to be hurling them at officers

In a video released on social media, the deputy head of TLP, Syed Zaheer-ul-Hasan Shah, said Rizvi’s arrest meant the government had violated an agreement to expel the French diplomat.

Last year TLP supporters brought Islamabad to a standstill for three days with a series of anti-France rallies.

Police blocked the demonstrators as they attempted to enter the capital. Some chanted that the only punishment for a blasphemer was beheading, police official Tauqeer Shah said.

The protesters attacked the police with bricks, stones and sticks, he added. They were pictured blocking the road into Pakistan’s capital.

‘Several of our officers were injured,’ he said, adding that nearly 2,000 protesters had camped at the main entrance to the city, refusing to leave. 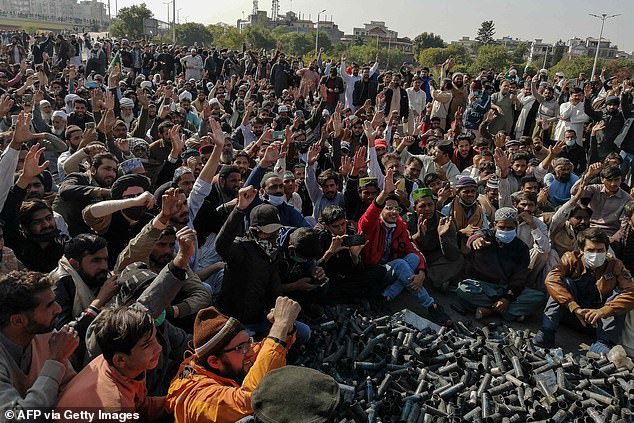 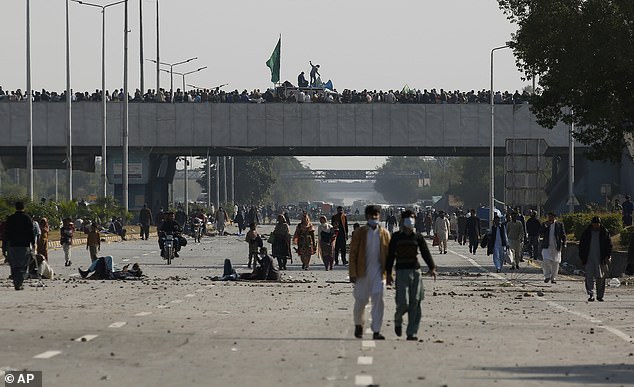 Nearly 2,000 protesters camped at the main entrance to Islamabad, Pakistan, . The protesters attacked the police with bricks, stones and sticks according to police official Tauqeer Shah

‘We want the government to expel the French ambassador immediately,’ the TLP’s vice president Zaheer-ul-Hasan said in a video statement. He added that scores of protesters were injured in the clashes.

TLP has also been said to have fuelled riots at a hospital in Faisalabad after two nurses were accused of blasphemy.

A mob gathered at the District Headquarters Hospital in Faisalabad demanding nurses Maryam Lal and Newsh Urooj are hanged.

The women told police they had been asked to tidy the locker of the head nurse and they had scratched off the sticker containing the holy text with a pen, The Times reports. 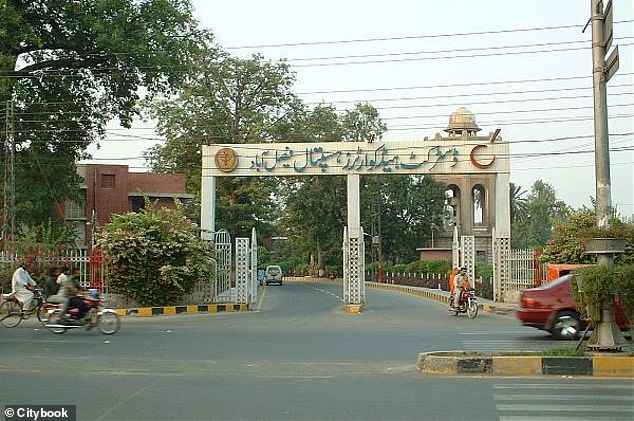 Riots broke out outside the District Headquarters Hospital in Faisalabad, Pakistan (pictured) after two nurses were accused of blasphemy

Police were forced to intervene to help rescue the women and later confirmed an investigation had been launched into the incident. Officers said the pair had been remanded for 15 days.

Pakistan has strict blasphemy laws which carry a death penalty for people who insult the Prophet Muhammad, Islam, the Quran or certain holy people.

An overwhelming 98 per cent of the population follows Islam and critics say the law targets members of other religious groups including Hindus and Christians.