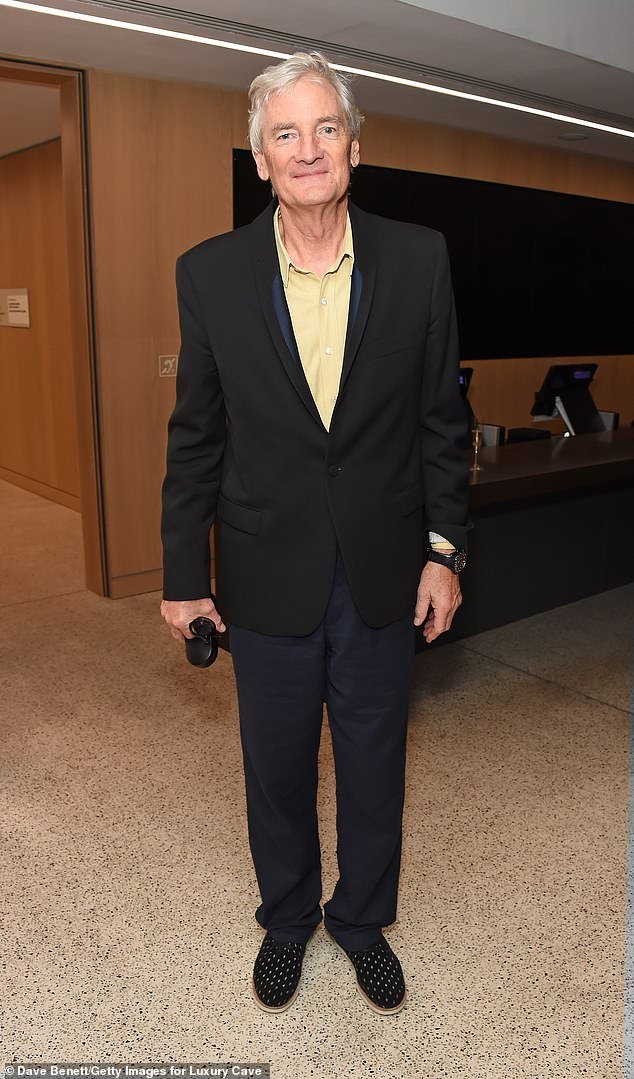 He’s amassed a £16 billion fortune, owns more land than the Queen and has properties in London, Singapore and France.

But today the ever inventive Sir James Dyson, Britain’s richest man, has a particular reason to celebrate.

Despite fierce local opposition, he has, I can disclose, just received the go-ahead to create a new art gallery at Dodington Park, the 51-bedroom stately home in Gloucestershire he snapped up for £20 million in 2003.

Sir James and his wife Deirdre, whom he met while they were students at Byam Shaw Art School in London in the 1960s, have, as it were, hoovered up works by David Hockney and Picasso as well as Sir Peter Blake and American icons Andy Warhol and Roy Lichtenstein.

Sir James, 73, says that it is ‘selfish having a collection no one can see’, and asked designers to start planning the gallery four years ago.

The result — a hexagonal, bronze-clad, green-roofed building in the 300-acre estate’s kitchen garden — will be open to the public, free, for 28 days each year when the businessman and his family are abroad on holiday, prompting Dyson’s agent to describe it as ‘a gift to society’.

Others are similarly antagonised, with one emphasising that ‘people come to enjoy a peaceful and attractive walk’, while another couple condemn the plans for ‘total contempt for [Dyson’s] neighbours’. The Dyson Foundation declines to comment. 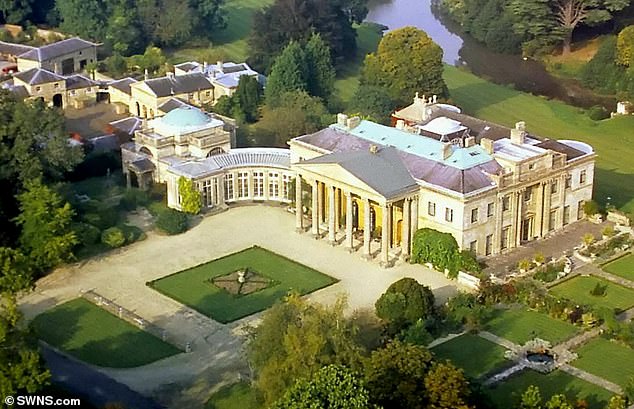 Sir James did, however, amend his plans in a bid to mollify his critics — without, alas, complete success.

‘Much window dressing but little substance,’ said one, Sheila Edwards.

Let’s hope that she and others will be consoled to know that the council hasn’t quite given Dyson carte blanche, but requires him to submit samples of the materials to be used before beginning the work — a stipulation with which Dyson, always fastidious about quality control, will surely comply.

Perhaps Sir James will placate critics with an open day just for them and treat them to a soothing glass of wine from his French estates?

TV chef and father- of-five Jamie Oliver admits he’s struggling to watch his children grow up as his second eldest, Daisy, turned 18 at the weekend. 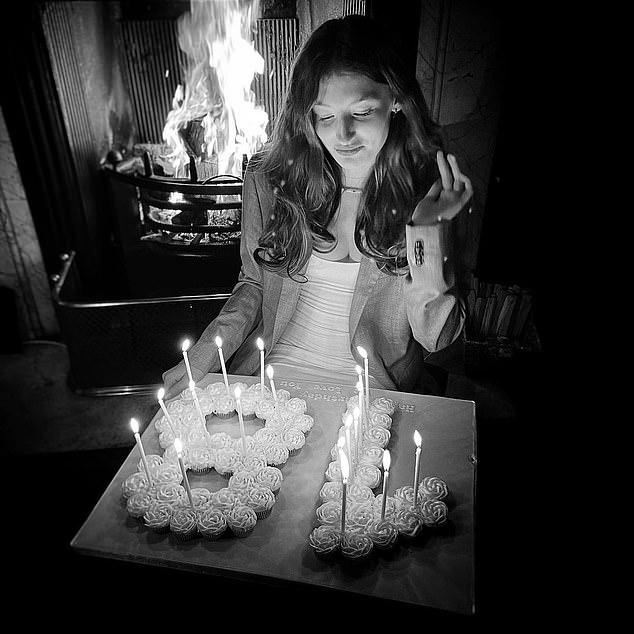 The 45-year-old, who is married to childrenswear designer Jools, shared a picture of the milestone moment, which Daisy marked with a square cake and her age written in floral icing.

‘Where has my little girl gone?’ Jamie captioned the post online. ‘What a journey it’s been. You’re such an amazing, kind, bonkers young lady. Me and Mum absolutely adore you. Let’s hope this summer is more normal and fun-packed for everyone.’

Chiselled model David Gandy says he wasn’t always the pin-up he is now. ‘I had a puppy-fat stage during my teenage years, then shot up and became quite gangly — overnight I went up to six foot two,’ says Essex-born Gandy.

‘I wasn’t the cool guy. I mean, I worked at dog sanctuaries over the weekends. I was a bit of a loner, and I still am.’

Get the violins out…

Party bag of the Baftas

In lieu of his annual soiree, the producer sent nominees and friends a celebratory box containing martini cocktails, Chanel No 5 scent and a specially curated list of Bafta-winning and nominated films.

Included was Network co-starring Faye Dunaway and Charles’s father, Peter Finch, who posthumously won a BAFTA and an Oscar for an actor in a leading role.

‘Like all of you, I miss the warm glow of the party light,’ Finch told his friends. Amen to that.

‘The notion of celebrity… I feel like it’s a by-product of my job. It’s not what I do,’ he explains. ‘I’m not a celebrity. I’m an actor and a writer.

‘When it gets shortened to celeb, it has become this weird passive aggressive term for people who overestimate their own importance in the world.’

Downton star writes her own role as Ava

Downton Abbey star Elizabeth McGovern has much in common with the late Hollywood siren Ava Gardner, both of whom were Oscar nominated in their early 20s and uprooted their lives in LA for London. 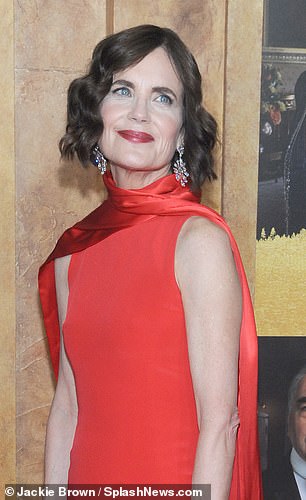 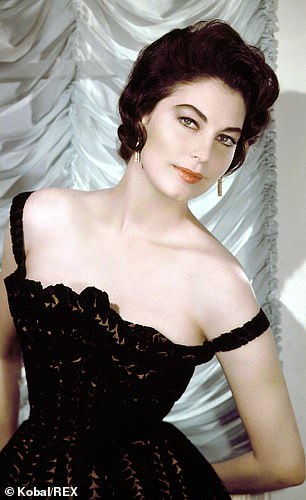 Now McGovern, who plays the Countess of Grantham in the ITV drama, reveals she is to become the fabled Gardner on stage.

‘I came across a book of conversations she had with her ghost-writer,’ says McGovern, 59. ‘I’ve written a play based on this book. I’d like to play Ava. We’ve got a producer and we’re going to stage it in London.’

McGovern moved to the capital in 1992 when she married theatre producer Simon Curtis, and in 2016 attended the unveiling of the blue plaque outside the former Knightsbridge home of Gardner, who died in 1990 aged 67. 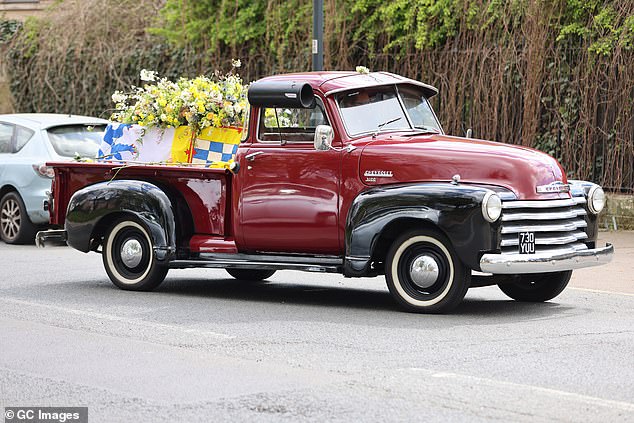 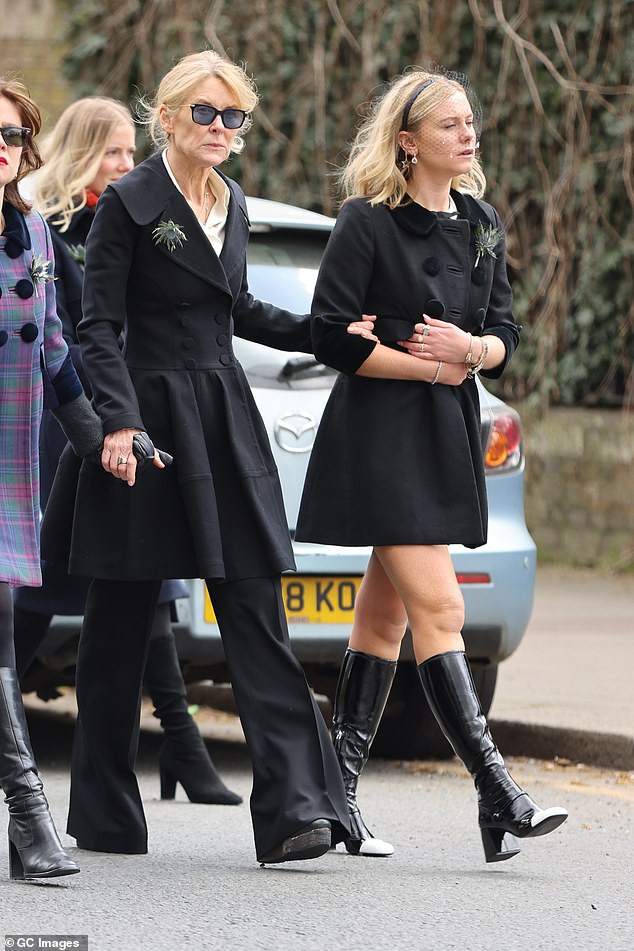 Leading the procession was his widow, fashion designer Serena Bute and their daughter Lady Lola

Following his death last month, aged 62, a funeral was held for him at Kensal Green Cemetery in West London where his coffin was carried in the back of a 1954 red Chevrolet pick-up truck, the very model he used to drive around London.

Leading the procession was his widow, fashion designer Serena Bute, who married the former Grand Prix driver in 1999.

Their daughter, Lady Lola, 21, who was also present, wrote the poignant message: ‘Your strength will guide us through this. Not goodbye forever.’