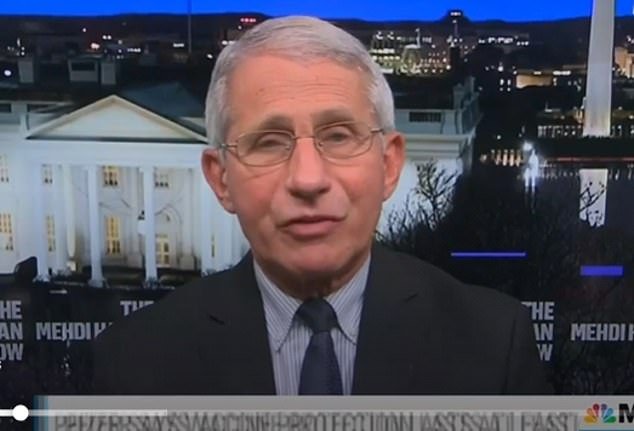 Dr Anthony Fauci today claimed the US may never need to use AstraZeneca‘s Covid vaccine.

America’s top infectious disease expert said his country has already bought enough alternative jabs to inoculate all 330million people in the US.

He said this was not a ‘negative indictment’ of the Oxford University-developed jab, adding that it was ‘really quite good’. But Dr Fauci told BBC Radio 4: ‘It looks right now, at this point in time, that we will not need it.’

Officials across the Atlantic have already given at least one dose of either the Pfizer, Moderna or single-dose Johnson and Johnson jab to 120million people and have fully vaccinated 73million.

The abundance of American vaccines has meant Washington will likely not need to rely on foreign jabs this year, but Dr Fauci has not ruled out turning to AstraZeneca if there are future Covid outbreaks.

Dr Fauci — who has previously been critical of AstraZeneca’s trial data and the British regulator for ‘rushing’ vaccines through approval — tried to quell the growing lack of confidence in the vaccine due to its link to extremely are blood clots.

He said: ‘I think the AstraZeneca vaccine, from a standpoint of efficacy, is a good vaccine.

‘And if the safety issue gets straightened out in the European Union — which I understand is still in a bit of controversy about how to use it and when to use and what age groups to use it — the efficacy of that vaccine is really quite good.

He said this was not a ‘negative indictment’ of the Oxford University-developed jab (shown), adding that it was ‘really quite good’

How do the Chinese vaccines compare to other approved jabs? CoronaVac, made by Chinese pharma company Sinovac, was found to be just 3 per cent effective at stopping symptomatic illness after the first dose, rising to 56.5 per cent two weeks after the second. Another Chinese-made vaccine made by state-owned pharmaceutical firm Sinopharm appears slightly better than the CoronaVac, 73 per cent efficacy against symptomatic illness

America’s top infectious disease doctor has warned against easing restrictions in the US too soon because of the Kent coronavirus variant.

Dr Anthony Fauci said the highly-infectious strain had become ‘quite dominant’ just as America gets set to start easing curbs.

He warned the US was in the same situation as the UK last winter, when the B117 variant rapidly took off and caused a wave that surpassed the peak last spring.

He told the BBC Radio 4 Today programme: ‘We’re having the same experience that the UK had – an acceleration associated with the variant.’

The Kent strain has been shown to be up to 30 per cent more infectious than the original Covid.

But the current crop of vaccines are just as effective at neutralising the variant, which means the US’ immunisation scheme should not be hampered by its rise.

He added: ‘The way the US has made contractual relationships with a number of companies, we clearly have enough vaccine — or will get enough vaccine — that does not include AstraZeneca, which would be enough quantitatively to vaccinate everybody in the United States.

‘Whether or not we ever use AZ is unclear but it looks right now at this point in time that we will not need it.

‘It is not a negative indictment of AZ — it just possible that, given the supply we have from other companies, that we may not need to use an AZ vaccine.’

As US states begin to loosen lockdown restrictions, Dr Fauci also said there was a ‘really risky situation’ when bars and restaurants were reopening in some places where the use of masks was not being enforced.

He said the vaccine rollout would blunt ‘a real explosion of a surge’ but it would not stop a moderate increase in cases.

‘This is not a time to prematurely declare victory because we have such a successful rollout,’ he said.

AstraZeneca’s vaccine is currently being investigated by European and British regulators over concerns about rare cases of blood clots.

It has not yet been approved in the US.