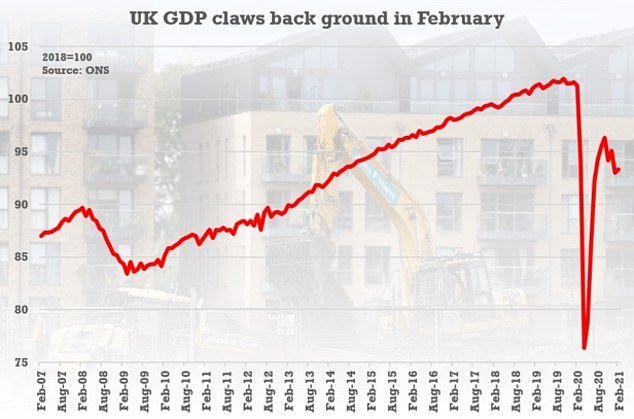 The UK economy clawed back ground in February with 0.4 per cent growth despite the brutal lockdown in force.

The official figures marked a recovery from the grim 2.2 per cent drop the previous month, with the construction sector driving the improvement.

However, the rebound was slightly below the expectations of some economists. And GDP is still around 8 per cent below the level it reached before coronavirus sent the world spiralling into chaos.

An ONS spokesman said: ‘The economy showed some improvement in February after the large falls seen at the start of the year but remains around 8 per cent below its pre-pandemic level.

The official figures marked a recovery from the grim 2.2 per cent drop the previous month, with the construction sector driving the improvement

‘Wholesalers and retailers both saw sales pick up a little, while manufacturing improved with car producers experiencing a partial recovery from a poor January.

‘Construction grew strongly after revised figures showed they had struggled in the last couple of months.

‘Exports to the EU recovered significantly from their January fall, though still remain below 2020 levels. However, imports from the EU are yet to significantly rebound, with a number of issues hampering trade.’

The crucial service sector grew by 0.2 per cent in February, as wholesale and retail trade sales picked up slightly.

Manufacturing expanded by 1.3 per cent – but construction saw the biggest boost at 1.6 per cent.

The previous estimates of a 2.9 per cent fall in output in January were revised upwards, with the drop now thought to be 2.2 per cent.

Overall GDP in February was still 7.8 per cent below the level 12 months before. 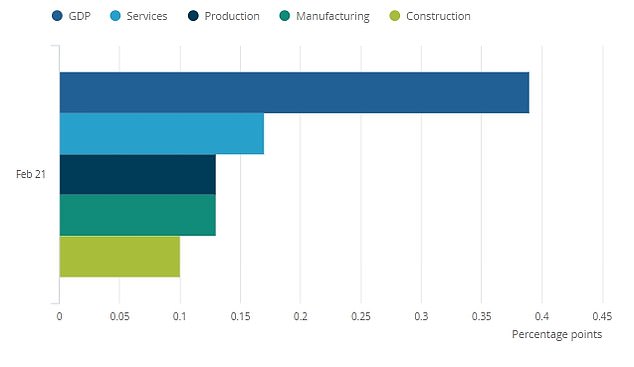