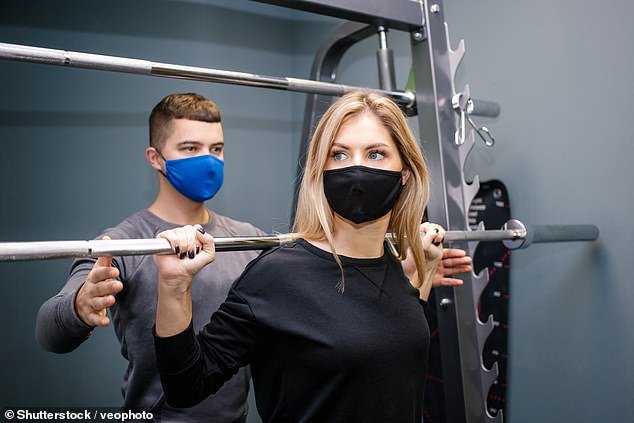 Wearing a cloth face mask while exercising leads to worse performance, according to the results of a small trial.

It found that when donning a face covering, a person’s exercise duration drops by 14 per cent while participants also recorded increased feelings of  breathlessness and claustrophobia when exercising at higher intensities.

The results of the trial on 31 healthy adults have been published online in the British Journal of Sports Medicine (BJSM).

Thirty of the participants said that the task — running on a treadmill to exhaustion — was harder when wearing a face covering.

World Health Organization (WHO) guidance backs up the finding, stating: ‘People should NOT wear masks when exercising, as masks may reduce the ability to breathe comfortably’.

Wearing a cloth face mask while exercising leads to worse performance, according to the results of a small trial (stock)

CAN JOGGING WITHOUT A FACE MASK INCREASE THE RISK OF SPREADING COVID?

There is little proof that jogging while wearing a mask reduces the risk of Covid and no infection has ever been been proven to be linked back to a runner.

Other than the first lockdown last spring, the UK Government has encouraged people to get out and exercise even during the strictest of lockdowns, indicating that minsters and their expert advisers do not deem jogging to be a major mode of transmission.

But that does not mean it has never happened and a small handful of scientists have warned it is possible.

Covid is transmitted in microscopic droplets of moisture that carry viral particles.

It was originally thought that the main source of spread was via these droplets from coughs and sneezes.

But more recent studies suggests it can spread just as easily in aerosols in the breath, prompting concerns about people exercising on crowded pavements.

A study by  Eindhoven University in the Netherlands and the Catholic University of Leuven in Belgium showed aerosols flow more than six feet behind an infected person while they walk, run or cycle.

The research last April raised the prospect of the outdoor exercisers being transmitters of the virus.

The scientists encouraged runners to steer clear of busy pavements and said jogging with a friend would be safer if people run side-by-side.

Researchers are equally unsure about whether masks could prevent this from happening because there is still fierce debate about whether non-medical grade face coverings reduce transmission at all.

The largest real-world study into face coverings and Covid, known as Danmask, found there was no difference in infection rates between people who wore masks in public places and those who did not.

The Copenhagen experts looked at 6,000 volunteers last spring before masks were mandatory there.

However the study has come under scrutiny, with critics pointing out that less than half of participants actually wore masks when they were supposed to.

Meanwhile, a study last month showed that particles expelled from a person’s mouth as they speak or breathe can swirl and spread into the proximity of other people, even when wearing a mask.

The study by the Aoyama Gakuin University in Tokyo found exhaled air from a person who is not wearing a mask moves downward due to gravity.

However, when a mask is worn while standing or sitting, the cloud of exhaled particles tends to attach to that person’s body and flows upwards

The UK Government introduced a suite of measures to reduce transmission while outside last year, including widening pavements to make social distancing possible on busy streets.

Face masks were made mandatory on public transport in June and in shops and indoor public spaces later in July, but remain optional while outside.

Masks have been mandated in much of the world as they are a highly effective way of preventing transmission of coronavirus particles between people.

Face coverings were first made mandatory for public transport in June and later for shops and other indoor spaces, after heated debates about whether they actually slow the spread of Covid.

They remain optional in outdoor spaces, with evidence suggesting coronavirus is less transmissible outside.

But in some gyms, people are required to wear face coverings when they work out.

In gyms, the risk of catching the virus is higher than outside but can be minimised with adequate ventilation and other measures, such as social distancing.

Researchers from the US tasked 31 adults aged 18 to 29 with running on a treadmill until exhaustion.

They did this twice, once with a cloth mask on and once unmasked.

Blood pressure, heart rate, oxygen saturation, exertion and shortness of breath were measured and recorded after a three-minute warm-up, during the exercise, and seven minutes after they had finished.

Data showed that wearing a mask led to a significant reduction in exercise time of 14 per cent. Maximal oxygen consumption also dropped by almost a third (29 per cent).

The volunteers said the mask made it harder to exercise and that they fatigued quicker when working harder.

The researchers say that their results do not fully explain why mask wearing may directly limit a person’s running ability.

They speculate that the discomfort that comes with exercising with a mask led to the reduction in performance.

‘Our results have several implications for training and performance while wearing a cloth face mask,’ they add.

‘Second, exercise goals can be modified to reflect the reduced performance and psychological impact of wearing a cloth mask while still promoting safe goal attainment.’

Work by Dr Trisha Greenhalgh, professor of primary care at the University of Oxford and a GP, published in April last year was highly influential in getting masks adopted in early 2020 by the general public to help curb the spread of Covid-19.

Professor Greenhalgh also believes Covid is airborne, allowing it to spread easily through the air.

This theory has divided the scientific community, leading to fierce debate with eminent experts falling on either side of the argument.

The subject spilled over into the public consciousness when a tangential debate was struck up on whether or not people should wear masks when out for a run.

Some studies have previously found that exercising with a mask can lead to health issues.