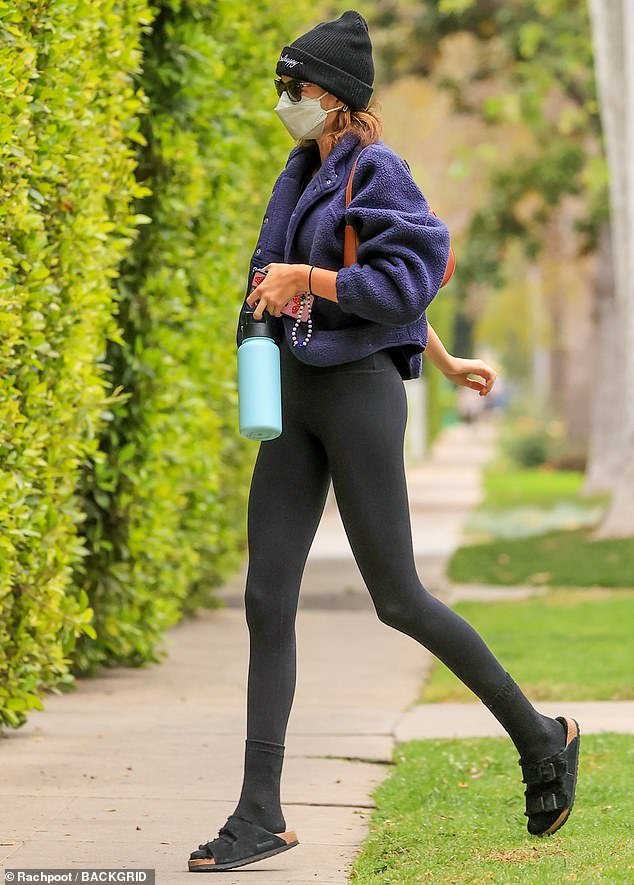 She’s known for flaunting her athletic frame on both runways and sidewalks.

And on Tuesday morning, model Kaia Gerber was spotted showing off her toned legs as she arrived at a Pilates class in Los Angeles.

The daughter and eldest child of Cindy Crawford and Rande Gerber appeared to be rushing to get to the workout session as she quickly made her way to the studio’s entrance.

Stepping out: Kaia Gerber was seen in a pair of form-hugging athletic leggings while arriving at a Pilates  class in Los Angeles on Tuesday

Gerber was dressed in a fuzzy purple button-up jacket that kept her nice and comfortable in the unusually chilly springtime weather.

She also wore a pair of form-hugging black athletic leggings that clung tightly to the outlines of her impressively toned legs and paired her bottoms with a pair of matching socks and Birkenstock sandals.

The 19-year-old model covered up much of her gorgeous brunette hair with a sizable black beanie while a few locks fell onto her shoulders.

The social media personality kept a small brown purse slung over her left shoulder and wore a pair of sunglasses while entering the Pilates studio. 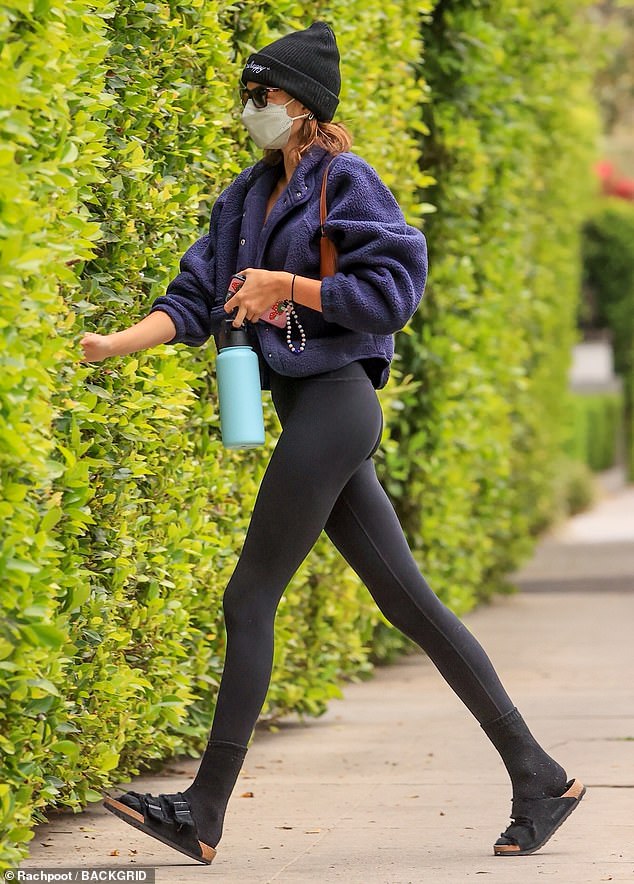 Staying cozy: The model also wore a purple fuzzy button-up jacket and a black beanie to keep herself warm in the unusually chilly springtime weather

Gerber wore a large white facial covering to keep herself protected while spending time around other people.

Although many other public figures have been using their periods of quarantine to focus on themselves and their families, the model has become a voracious reader over the past few months.

During an interview with Elle, the social media figure spoke about how starting a book club has enabled her to take her passion for reading to another level.

‘I think literature has created this community of people for me that has really helped me to grow and learn,’ she said. 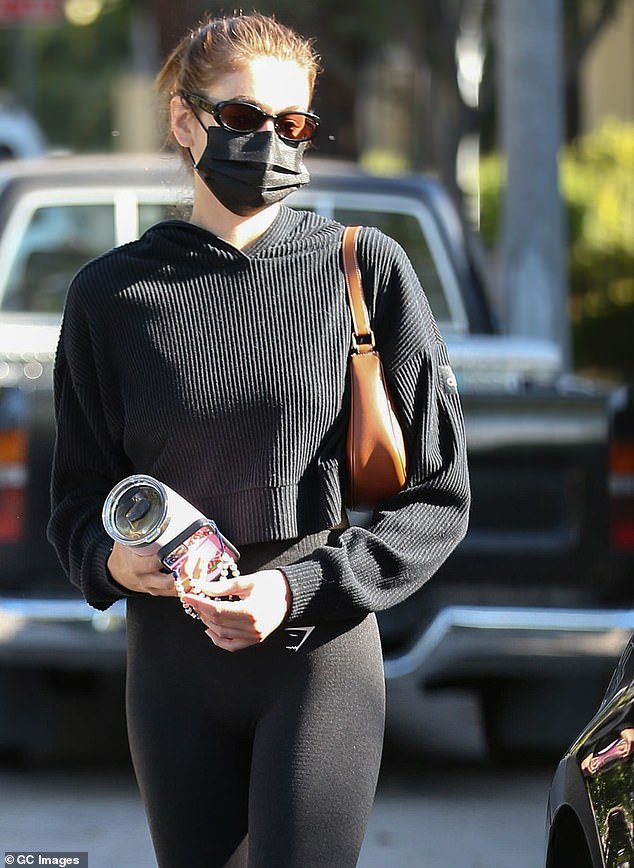 Keeping busy: Gerber started a book club during the earlier stages of the pandemic, and recently told Elle that she loves the new ‘community of people’ that she has found; she is pictured earlier this month 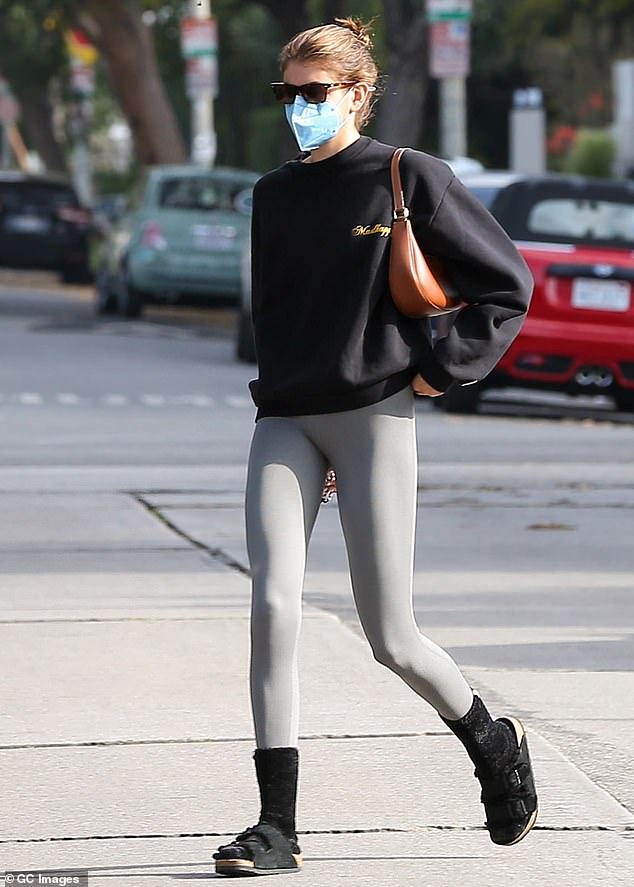 Talking it over: The social media personality also noted that she was enthusiastic to learn about new viewpoints and opinions through her book club

Gerber went on to express that she was grateful for the opportunity to encounter new viewpoints and opinions through her book club, which may not have occurred otherwise.

Specifically, she noted that she was happy about being able to take part in ‘the conversations…that wouldn’t normally be opened up to me.’

She did, however, detail her plans for the months after the end of the pandemic and expressed a desire to get back to seeing live acts perform. 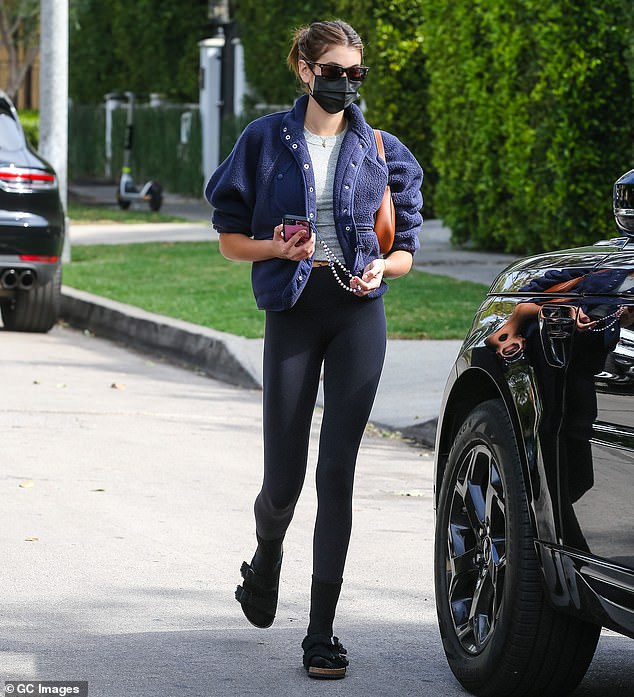 Priorities: Gerber did note that, once the pandemic is over, she would like to get back to seeing live music and dancing at shows

Although she appears to be busy with her quarantine-inspired activities, Gerber was recently added to the cast of the upcoming tenth season of American Horror Story.

The model is one of two newcomers to the crew of the longrunning FX anthology series, with the other being Macaulay Culkin.

The cast is currently padded out by several returning performers, such as Lily Rabe, Billie Lourd and Evan Peters, among numerous others.

The forthcoming season, which is currently titled Double Feature, is currently filming and has no set release date as of yet. 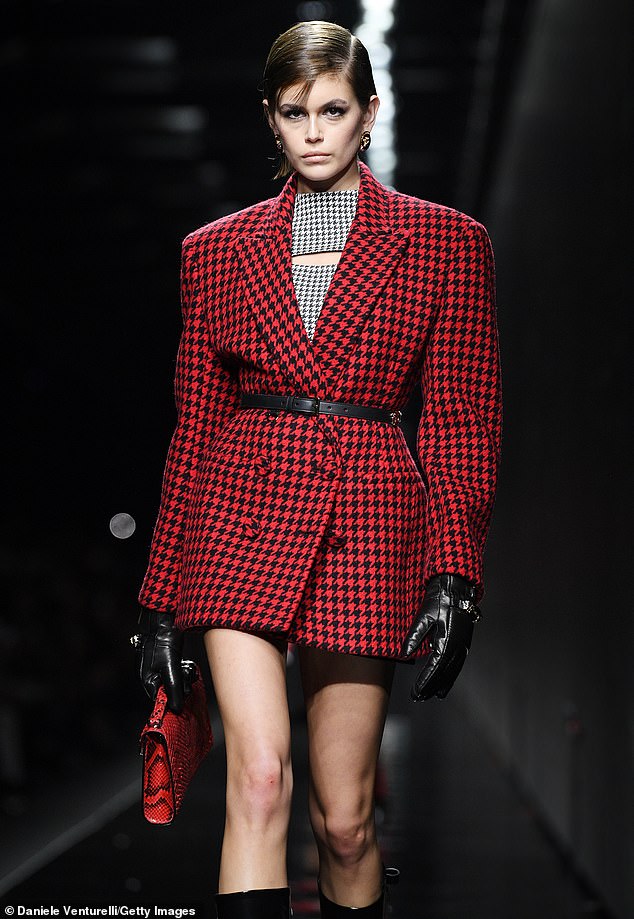 Making moves: Earlier this year, it was announced that Gerber, along with Macaulay Culkin, would be joining the cast of the upcoming season of American Horror Story; she is pictured at Milan Fashion Week in 2020