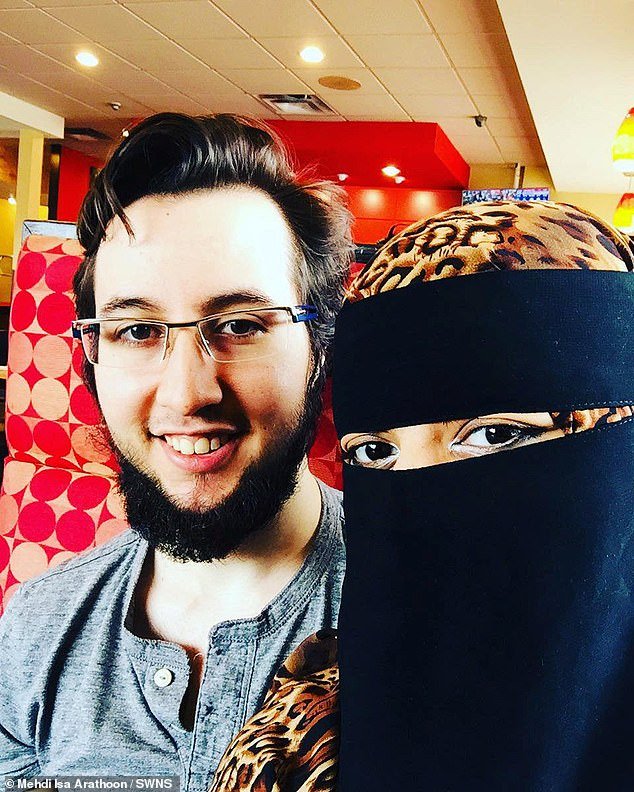 A couple got married four years after they first met without the husband ever seeing his wife’s face because of her niqaab.

Mubina Mustafa, 28, from Pickering, Ontario, and Mehdi Isa Arathoon, 27, were in the same class at university, but he was a Christian and she was a Muslim, so even helping each other with their studies was frowned upon by their strict families.

It wasn’t until he began dating someone else, that Mubina – who had never even been friends with a man who wasn’t family – realised she had feelings for her former classmate.

The couple couldn’t date unless they were going to marry, and they couldn’t marry unless he became Muslim.

So smitten Medhi took a leap of faith and converted to Islam and proposed to Mubina two months later.

It wasn’t until after the ceremony that Mehdi saw underneath the niqaab – or face veil – Mubina wears in front of everyone, apart from her husband and family.

Mubina Mustafa, 28, and Mehdi Isa Arathoon, 27, from Pickering, Ontario ,married each other despite the fact her husand had never seen his wife’s face under her niqaab during their four years of friendship 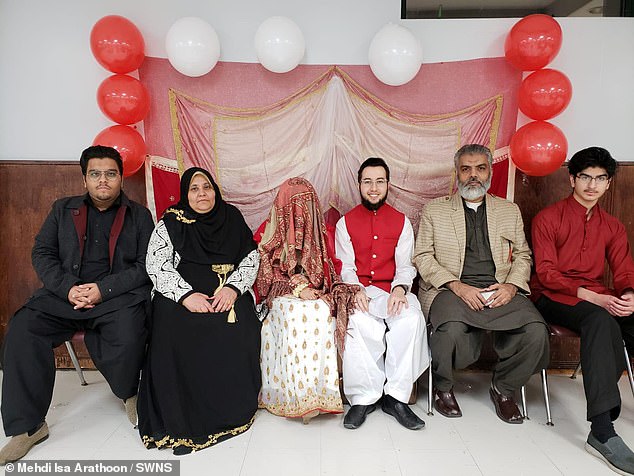 The couple at their wedding in December 2018, the day when Medhi saw his wife’s face for the first time. Her family were unsure when he first converted to Islam, but Medhi proved his commitment and was determined to go ahead with the wedding

After signing their wedding documents, the couple were taken to a private room by Mubina’s mother and she removed her face covering.

Mehdi said: ‘Before we got married I would picture how I thought she would look.

‘She didn’t look exactly how I thought but I was pleasantly surprised when I saw her for the first time.

‘I wanted to show it doesn’t matter how she looks. I still want us to be together. For me, I felt she was enough as she was. 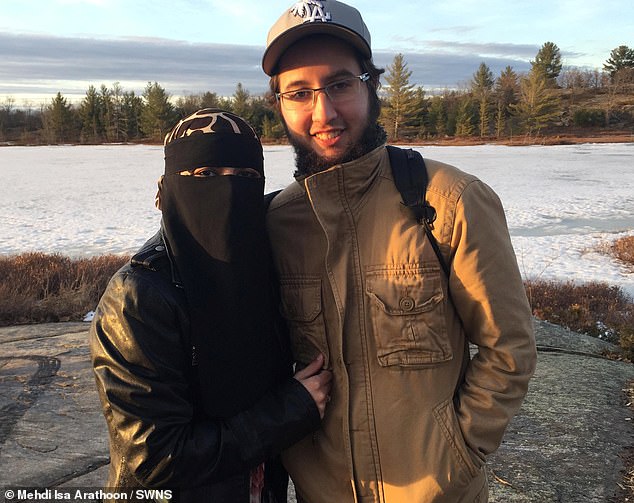 Happy couple: Mubina Mustafa, who wears a niqaab, and Mehdi Isa Arathoon who was a Christian but converted to Islam a so they could marry

‘When I finally saw her face it was shocking – I didn’t know how to react! My first word was like “wow”.

‘I felt a little weird because I’d spent four or five years without seeing her face. I felt a little bit awkward. I started tearing up. I was so overwhelmed.’

Mubina, a medical lab technician, said: ‘I was just very nervous. I thought he was going to think I’m ugly.

‘I saw him with exposure to so many different girls, you just feel average when you’re amongst all these other girls that were so pretty. 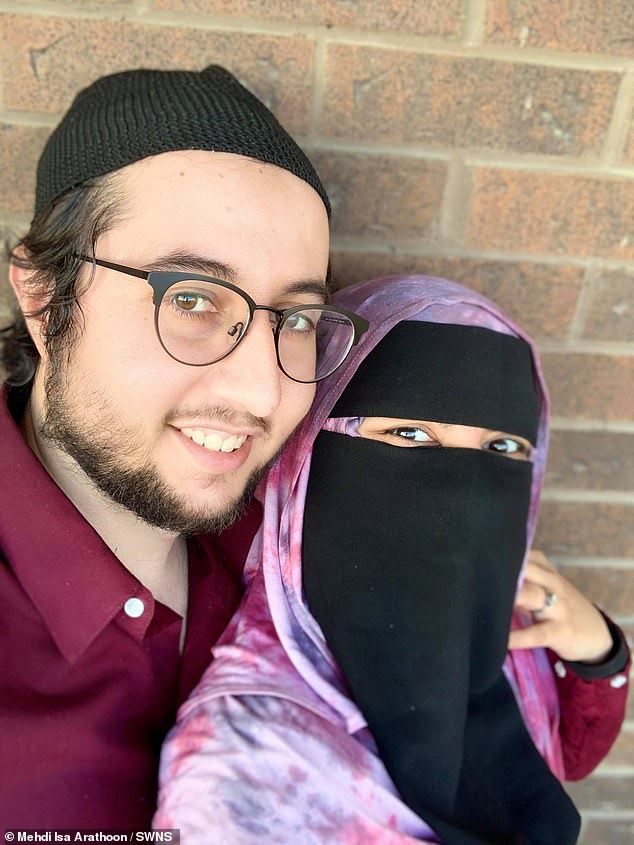 Mehdi said that before they married, he would picture how his wife would look. And although she wasn’t exactly what he imagined, he was ‘pleasantly surprised’ 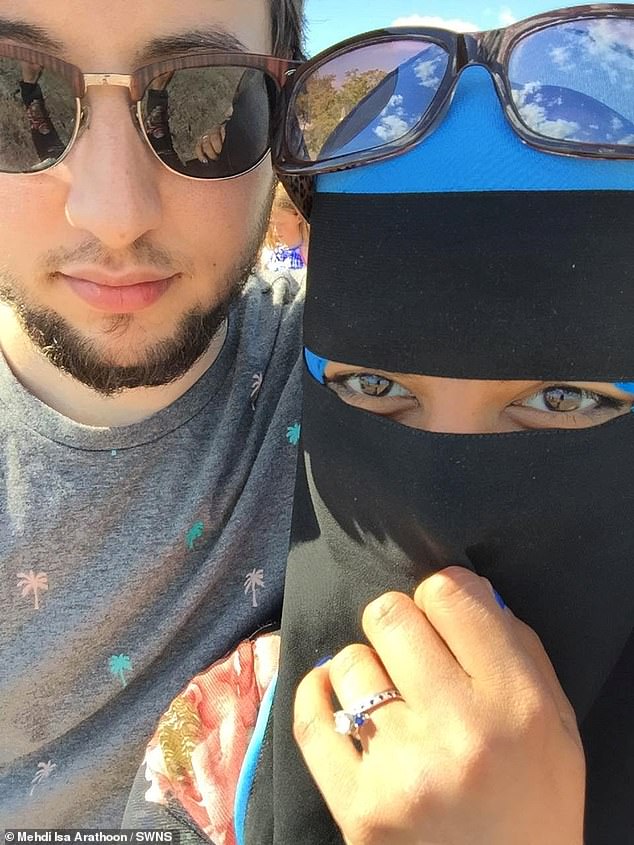 Lab technician Mubina said that she was very nervous about her husband seeing her face for the first time, and was sure that he would think she was ‘ugly’

‘I didn’t know how he would feel when he saw me for the first time so I was shy at first, but it was a relief once he saw my face.’

The pair first met while studying psychology at the University of Toronto, but met again through a Facebook group for their class in September 2014.

Mehdi messaged Mubina asking for some help with an assignment, having no idea that they sat just metres from each other every week.

Client service specialist Mehdi had seen a person wearing a niqaab in his class but had no idea who she was. 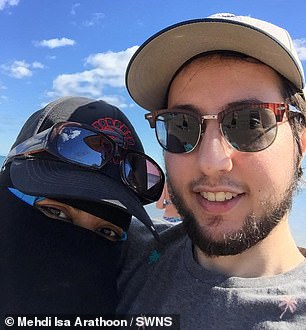 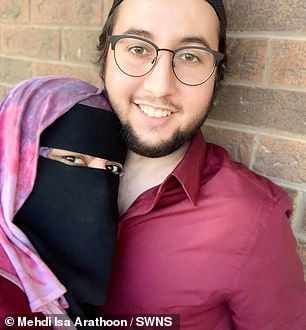 Mubina reaized her feelings for her university friend after he started dating another woman. Meanwhile, Mehdi was also advised by his Christian family that he shouldn’t grow too close to his online study partner

Mubina accepted, but after helping she withdrew, because she ‘didn’t really talk to guys’.

She said: ‘I thought this is just another person asking for help.

‘Then a few weeks later he messaged me again I was like “oh my god it’s him again”.’

Mubina’s only previous interactions with men had been with her cousins and uncles, so she was confused by his advances.

Mehdi was also advised by his Christian family that he shouldn’t grow too close to his online study partner, he claims.

He said: ‘I’d seen a girl with a veil and back then I had a very Islamophobic view. 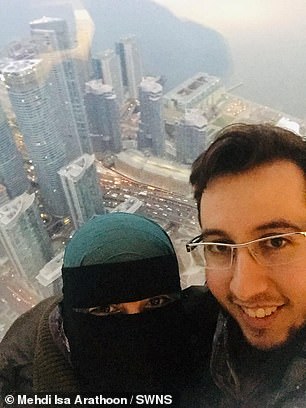 ‘I thought, “This woman is being oppressed – what man is making her do this?”.

‘I didn’t know what to do at that time, so I thought let’s just cut off contact together.’

But the pair really enjoyed studying together in the library and labs and grew closer as friends – helped by their improving grades thanks to their study sessions.

In 2016, Mubina was hospitalised with a benign tumour, which caused an infection in her stomach.

She struggled mentally, but said then-pal Mehdi was her ‘ray of sunshine’ and supported her, restoring her faith in people.

Mubina said: ‘Mehdi was very nice throughout that period. He didn’t make me feel like I was some gross thing that didn’t fit in society.

‘It was still work related, but I noticed some type of change in the way he talked to me, it wasn’t just professional he would ask me how I am, if I’m ok.

‘Then I remember we would be in class and he even got me water.

‘It was little gestures that really made me feel that there are nice people out there in the world.’

She knew he was more than a friend – but accepted their religions would never allow them to be together.

Mubina said: ‘I used to pray for it when I got feelings for him. I prayed to God either take him away from me or bring us together.’ 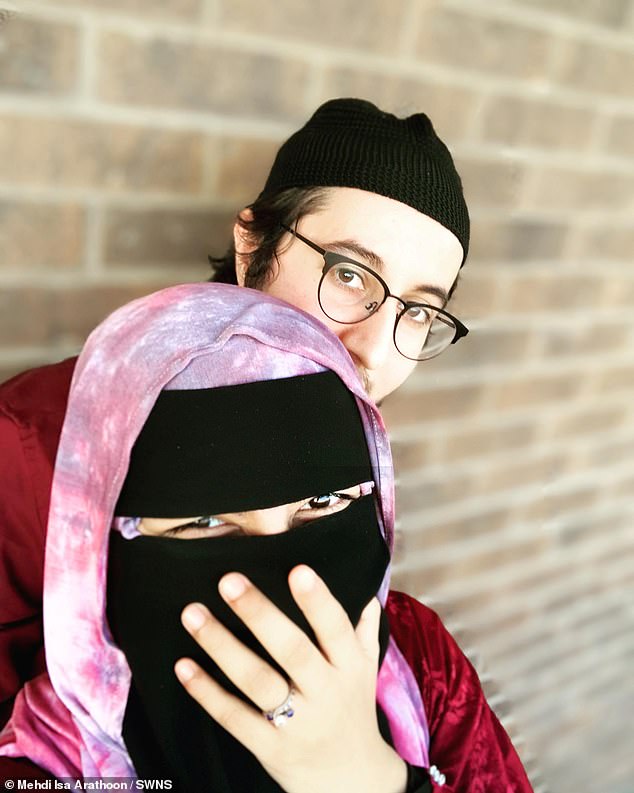 Mubina said: ‘We don’t want anyone to think they can’t find love. For me, I thought it was impossible for him to convert, but it happened.’

They graduated in 2017, Mehdi went to graduate school to continue his psychology studies, and Mubina pursued a course to become a certified medical lab technician.

The friends both applied to work in the same research lab in downtown Toronto and maintained their working friendship.

But in April 2018, Mehdi moved out from his family home and start pursuing a serious relationship with another girl.

Mubina realised the strength of her feelings.

She recalled: ‘I didn’t understand why I didn’t like it – I had feelings for him I didn’t realise.

‘I did come clean with my feelings. I told him this is the reason we can’t talk anymore.’

She said they shouldn’t talk every day if he was dating other women – and Mehdi realised he couldn’t risk losing her.

He said: ‘I said, “I’m trying to look past this but I can’t see myself with anyone else”.’

Mubina told Mehdi that if he wanted to be with her he’d have to marry her, and he couldn’t marry her unless he was a Muslim.

She said: ‘I was a practicing Muslim and to be with somebody who wasn’t Muslim would be a very difficult life for me.

Mehdi did not want to convert from Christianity to Islam just for marriage, so he did months of research before deciding it was the correct choice for him.

Mubina said: ‘It was a hope – it was a very deep down hope – and it wasn’t something I wanted to push on him.

‘For me it was important no one felt pressure around me, but I never thought he would do it.’

Mehdi said: ‘I felt naturally in myself I was already a Muslim, the religious part was probably easier.

‘It was a mix of both religion and their culture I was trying to get used to, but it was overwhelming.’

He learned prayers and changed his diet, and became a Muslim on June 17 2018 by reciting the Shahada – a statement of faith.

Mubina’s family were initially sceptical, telling her to ‘watch him’ for six months as a new convert, unconvinced he would be dedicated enough to go through Ramadan, she claims.

But he remained faithful, and eventually married the love of his life on December 23 2018 and that was when he saw his wife’s face for the first time.

Mehdi Isa said: ‘Her dad had said, “Follow me”. I just followed him to an empty room then all of a sudden Mubina and her mother came in and Mubina had a shawl on her head.

‘I was so confused. Everyone left the room except a desk, Mubina was on one side with the towel and that was it.

‘Mubina was feeling shy and nervous so I kind of clued in; this is that moment.

Mubina said: ‘It felt good. I could finally give him unrestricted companionship he wanted. I wanted that, he wanted that.’

They moved in together in April last year, and started a TikTok and Youtube channel, MehdinaTV, which has amassed over 1.2 million followers.

Mubina said: ‘We don’t want anyone to think they can’t find love. For me, I thought it was impossible for him to convert, but it happened.’

Mehdi said: ‘There were so many obstacles we faced but despite them God brought everything together.’