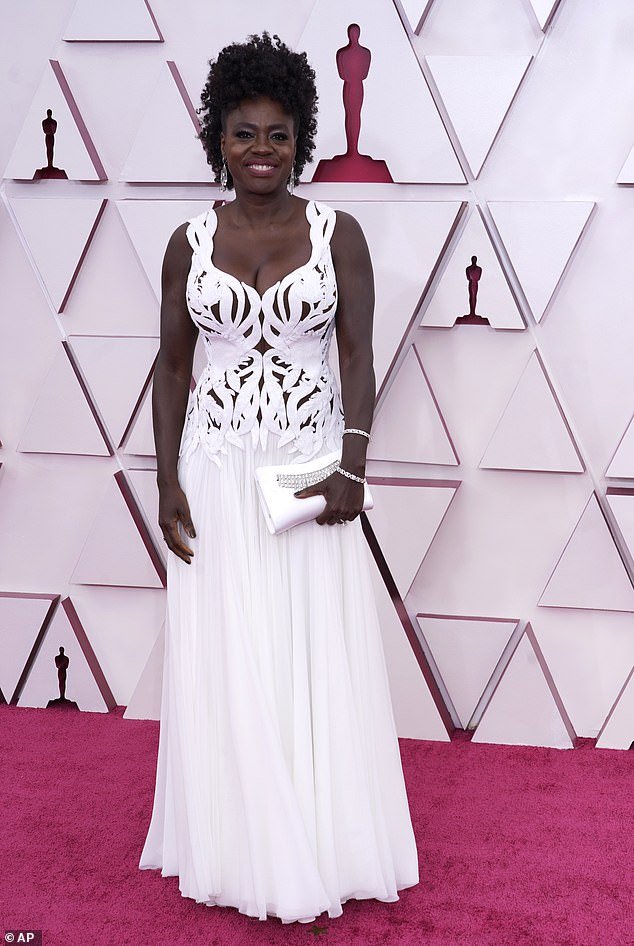 The star of Ma Rainey’s Black Bottom spoke about her co-star on the red carpet of the 93rd Academy Awards, telling E! News’ Giuliana Rancic ‘it feels right’ to see the outpouring of love for Boseman, who passed away last August after a secret battle against cancer.

Viola, who dazzled in a white cut-out Alexander McQueen number, said the star was the real deal, calling Chadwick a true ‘artist’ who she was honored to work with.

The real deal: Viola Davis called the late Chadwick Boseman ‘authenticity on steroids’ while talking about him ahead of the 2021 Academy Awards on Sunday

‘He was authenticity on steroids,’ she said, with husband Julius Tennon at her side.

‘Sometimes people honor people who actually were not really nice or really the persona did not match the real person. This [love] it matches a person.’

‘I’m telling you, this person, this human being, this artist did not mistake his presence for the event,’ Viola went on. ‘He absolutely honored the work.’

‘He entered it because he just wanted to be an artist.’ 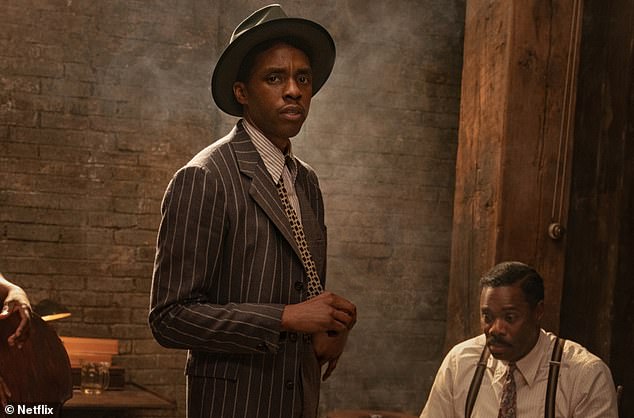 True artist: Chadwick, who passed away last August, was posthumously nominated for Best Actor and is a favorite to win 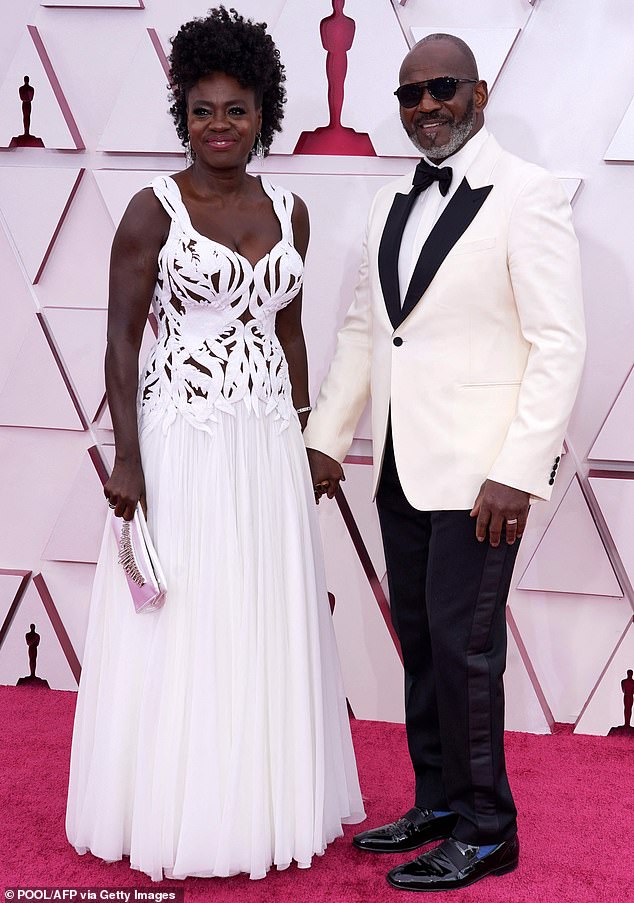 The craft: Davis celebrated Boseman’s dedication to the craft, saying ‘A lot of people enter this business because they want to be famous actors… He entered it because he just wanted to be an artist.’ She’s seen with hubby Julius Tennon above

Chadwick earned a posthumous Oscar nomination for his role in Ma Rainey.

He’s a favorite for the category, already taking home the Golden Globe and Screen Actors’ Guild honor for Best Actor.

The 2021 Oscars are a far more intimate affair than years past.

This year COVID restrictions have whittled the VIP guest list down to only 170 people, from the usual 3,000.

The Academy of Motion Picture Arts and Sciences is hosting the delayed ceremony at the historic Union Station in Los Angeles, California where socially distanced movie stars can go mask-free while on-camera or seated in the main show room. 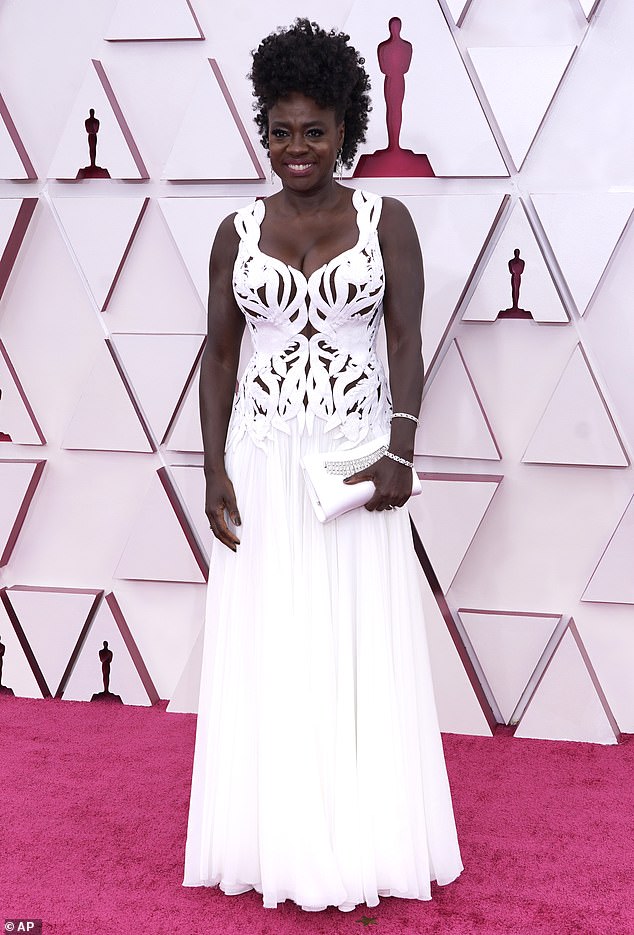 Glowing:  Viola, who is nominated for Best Actress, wowed in white Alexander McQueen 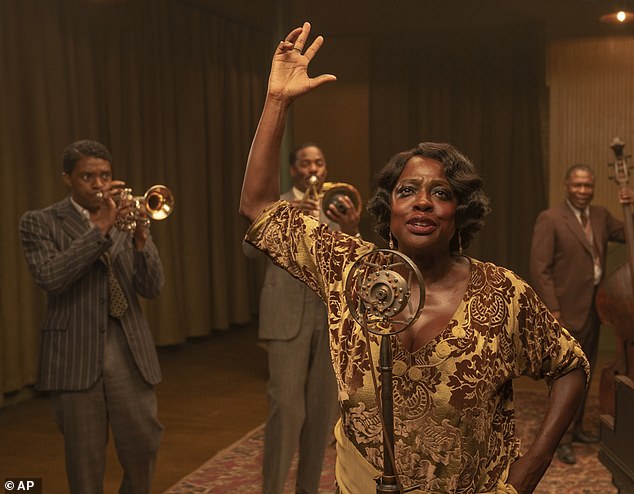 Sticking to a ‘No Zoom’ policy unlike other shows that have taken place this awards season, Academy organizers have teased a ‘British hub’ for UK actors who are unable to make it in person, as well as another rumored ‘surprise location.’

During a year that saw movie theatres closed due to the pandemic, there were eight new films that did manage to impress Academy voters enough to be in contention for Hollywood’s biggest award, the Oscar for Best Picture (last year there were nine nominees in the category.)

While blockbusters may be absent this year, there have been a wide range of movies that have caught the attention of Academy voters, including the lavish Mank, Netflix’s ode to the Golden Age of Hollywood, starring Gary Oldman and Amanda Seyfried.

And there was also plenty of glamour on the red carpet, with Viola putting on an incredibly chic show in her cut-out white dress, while her hair was swept into a fun updo by stylist Jamika Wilson.

According to Jamika, Viola wore the same style during a recent photoshoot, and loved it so much that the duo decided to recreate it using products from Matrix, including the Total Results Miracle Creator Multi-Benefit Treatment Spray which ‘nourishes, boots shine, adds moisture and protects against heat’.