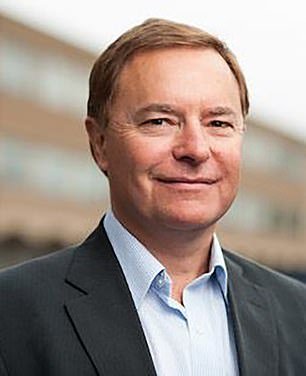 Officials may decide whether under-40s should also be offered an alternative to AstraZeneca‘s coronavirus vaccine in a crunch meeting tomorrow.

Britain’s medical chiefs ruled in April that under-30s should be offered either Pfizer or Moderna‘s jab because of rare blood clots linked to AstraZeneca’s shot.

Health bosses insist the UK-made vaccine is safe for almost everyone and that the risk of getting the complication is tiny.

The decision was only made because the benefits of the jab are not as clear-cut to younger adults, who face a vanishingly small risk of dying from Covid.

But amid plummeting cases across the UK, officials have been forced to recalculate whether the benefits of being jabbed still clearly outweigh the risks for under-40s — who are also at low risk from the virus.

Professor Harnden told MPs on the Science and Technology Committee today that the Joint Committee on Vaccination and Immunisation (JCVI) was ‘looking at this group very carefully’.

He also hinted officials would only press ahead with the recommendation under-40s are given alternatives to the AstraZeneca vaccine if they were confident in supplies.

Delaying the immunisation roll-out could ‘push infection rates up’ and lead to ‘many, many more deaths and hospitalisations’, Professor Harnden warned. MPs were also told that the roll-out would be expanded to thirty-somethings within weeks.

Sir Munir Pirmohamed, chairman of the Commission on Human Medicines, said rates were ‘very similar’ between genders and figures may have appeared skewed because more women work in the NHS and social care — where the jab was mainly deployed.

The Government wheeled out a series of graphs comparing the risk of falling ill with Covid compared to the threat of developing blood clots after getting the AZ vaccine in various age groups. In low Covid levels, every 100,000 vaccines prevent 0.8 ICU admissions from coronavirus in people under 30 but 1.1 people will suffer blood clotting after having the jab, making the threat higher than the virus itself. The benefits were more obvious for adults in their thirties at the time 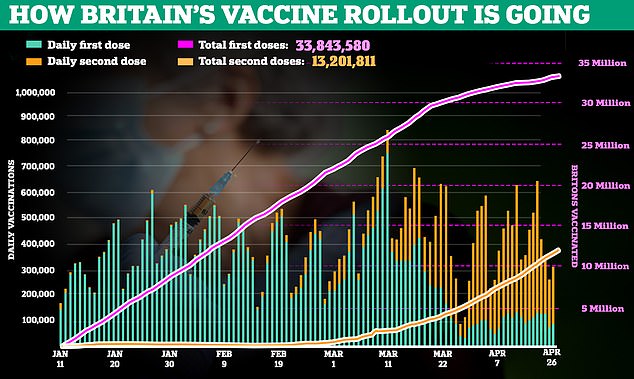 Professor Harnden said: ‘We are actually meeting twice a week at the moment and almost all the discussions have been about this (alternative vaccine for the under-40s).

‘So we will be meeting tomorrow and we will be deciding about whether we leave that decision to the following week or whether we take it this week.’

He added: ‘We are looking at this group very carefully.

‘If we see infection rates rise then potentially there is a public health imperative to carry on with the vaccine programme.

‘This is against, of course, supply and availability of the vaccines, and we are given information — though it’s commercially confidential — about how much vaccine that we have and what we can offer people.

‘So, for instance, if we do make a decision for the under-40s that will delay the immunisation programme.

‘[It] therefore may push infection rates up and therefore, from a public health perspective, may end up getting many, many more deaths and hospitalisations because of that.’

Justifying their recommendation to offer under-30s an alternative to AstraZeneca’s vaccine, British health chiefs wheeled out a series of graphs comparing the risk of falling ill with Covid compared to the threat of developing blood clots after getting the AZ vaccine in various age groups.

Data at the time suggested that, in low Covid levels, every 100,000 jabs prevent 0.8 ICU admissions from coronavirus in people under 30 but 1.1 people will suffer blood clots, making the threat to younger adults slightly higher than the virus itself.

The benefits were more obvious for adults in their thirties at the time but the data was based on an infection rate of around 20 cases per 100,000 people every week. The UK’s current rate stands at around 20.

The MHRA — UK’s drug regulator — has been looking closely at people developing blood clots that appear alongside low platelet counts (thrombocytopenia) because this appears to have emerged as an unusual pattern among people who have had the vaccine.

There have been 168 cases linked to the AstraZeneca vaccine so far in Britain, out of millions of doses dished out.