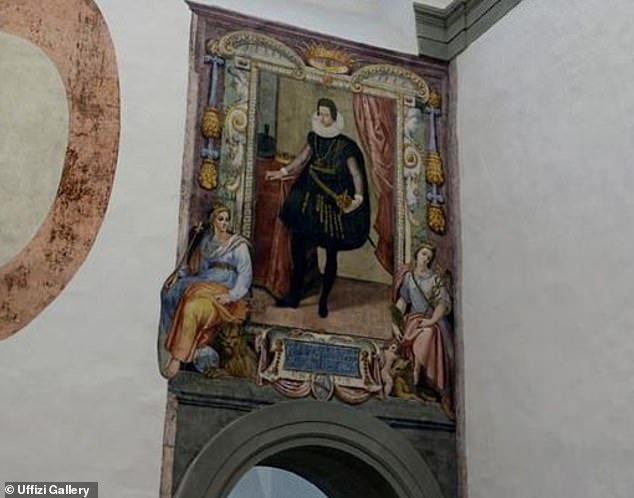 Renovations at Florence’s Uffizi Galleries turned up some startling surprises, including a 17th century fresco and human remains.

A painting of Cosimo II de Medici by Mannerist painter Bernardino Poccetti was uncovered from behind plaster when the museum’s coat room and ticketing booth were made over.

Workers excavating unused basement rooms found the skeletons of three people buried when the site was a church and cemetery more than 400 years ago.

The renovations were conducted while the museum was closed due to COVID-19 and visitors will be able to view the Medici fresco when the Uffizi reopens May 4.

Construction on the Uffizi was ordered by the Grand Duke of Tuscany, Cosimo I de’ Medici, in 1560 to serve as offices for Florence’s government officials. (The name comes from ‘uffizio,’ Italian for ‘offices.’)

From the beginning, the top floor was used to exhibit the Medici family’s incredible sculpture collection and over the years more space was devoted to displaying artwork.

The Uffizi Gallery was officially opened as a public museum in 1865.

A full-length portrait of a young Cosimo II, grandson of Cosimo I, was discovered during renovations conducted on some 43 unused rooms in the Italian renaissance museum’s ground floor and basement.

Pictured: A renovated underground area in the Uffizi Gallery where the Medicis once housed their stables.  Workers digging centuries of accumulated earth from the basement uncovered three skeletons and a medieval well

Cosimo II de’ Medici (left) and his father, Ferdinando I (right) were members of the House of Medici, the most powerful family of rulers in Renaissance Italy. Frescos of both men have been uncovered at the Uffizi Gallery

It has been attributed to Florentine Mannerist painter Bernardino Poccetti or perhaps one of his followers, which would date the painting to the late 16th or early 17th century.

The House of Medici was the most powerful family in Italy during the Renaissance and Cosimo II ruled Florence from 1609 to 1621.

His fresco was hidden under plaster on a wall above a door in a storeroom that had once been a government office.

It depicts Cosimo II with a female figure at his feet alongside a lion representing the city of Florence itself.

A second female figure reclining by a wolf represents the city of Siena, which was also controlled by the Medicis.

‘It was normal to have paintings of rulers over the doors in government offices and this one shows the young Cosimo showing off Florence’s conquest of Siena,’ Museum director Eike Schmidt told The Times.

Schmidt suggested the work could have been covered up in the 18th or 19th century.

‘It is typical that frescoes like these were painted over when rooms changed use,’ Schmidt said.

But an unknown good Samaritan protected the fresco before it was plastered over.

‘It’s amazing how this building was adapted to new needs down the centuries,’ Scmidt said. ‘Each room tells a fascinating story,’

A smaller fresco uncovered in the same room depicts Cosimo’s father, Ferdinand I, who ruled Florence before him.

A worker restores plant motifs found on the walls and ceilings in a room in the Uffizi’s west wing. The famed Renaissance museum will reopen to the public on May 4

‘We had absolutely no idea [they were there]. That was a total surprise,’ an Uffuzi spokesperson told Artnet News.

‘Obviously our researchers are already trying to figure out the story behind this.’

The refurbishment also uncovered plant motifs on the walls and ceiling of a nearby room, likely carried out during the reign of Pietro Leopoldo di Lorena in the 18th century.

One level down, workers uncovered three skeletons after digging out hundreds of years of accumulated dirt and detritus in unused space in the gallery’s basement, along with a well from the Middle Ages.

The remains and well date to the cemetery which belonged to a church which was incorporated into the Uffizi when it was built in the 16th century.

It’s not the first time human bodies have been found at the Uffizi: In 2014 workers digging an elevator shaft uncovered the remains of more than 60 people, dating to the late 4th century.

It’s not the first time bodies have been found at the Uffizi: In 2014 workers digging an elevator shaft uncovered the remains of more than 60 people (pictured) dating to the 4th century

The current restoration is part of a major renovation plan which aims to remap the 400-year-old building and create new paths for visitors to take.

The new visitors entrance will be located in the west wing, where the frescos were uncoverered.

‘In the last five years, enormous progress has been made in the recovery of spaces, progress that now allows more rational and safe access to the museum, and more efficiently organized reception points,’ Schmidt said.

An additional 21,500 square feet of space has been added, and stables in the basement have also been restored to eventually be opened to the public.

‘Soon, when the ground-floor rooms of the east wing will be rearranged, a visit to the Uffizi will have a glorious introduction,’ he added.

‘Classical statuary will be exhibited in the ground-floor rooms, with works from storage and others recently purchased.’