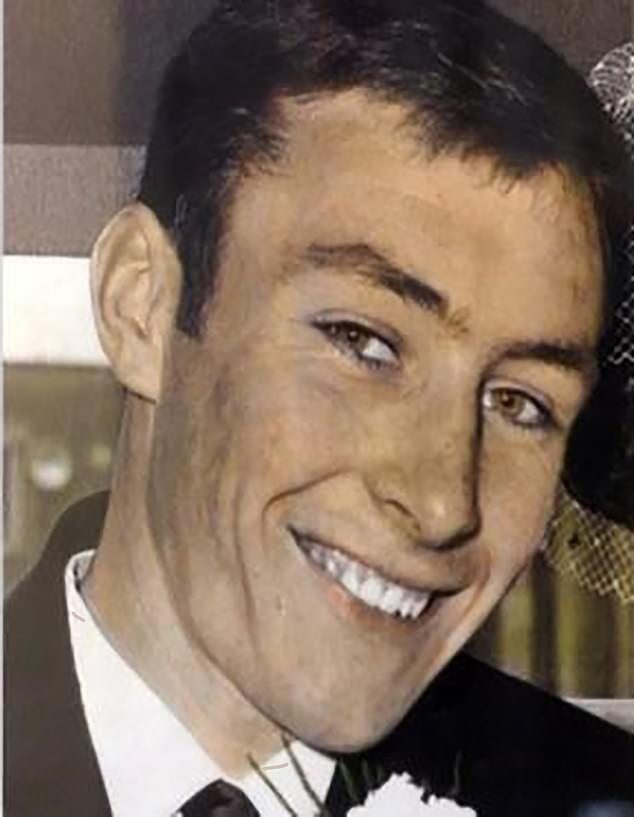 Almost half a century ago, Northern Ireland’s home affairs minister John Taylor was ambushed leaving the family engineering business in his home town of Armagh.

Two men raked the 34-year-old’s car with machine-gun fire. He was hit five times in the face and neck and left for dead, slumped over the steering wheel.

Somehow, the politician, just about to become a father, survived. But his wounds were so severe he spent a year in hospital, requiring reconstructive surgery to the jaw.

The Official IRA claimed responsibility for what was the first assassination attempt on a member of the Northern Ireland government.

Northern Ireland’s prime minister Brian Faulkner described the February 1972 attack as ‘in line with the kind of actions these vicious, anti-human murderers sink to constantly’.

Three days earlier, the Official IRA’s army council, of which McCann was a member, had authorised a bomb attack on the headquarters of the Parachute Regiment in Aldershot in retaliation for Bloody Sunday.

Joe McCann, officer commanding the 1st Battalion of the Official IRA, was suspected of shooting dead two soldiers, including Corporal Robert Bankier, one of the first British servicemen murdered in the Troubles. Little wonder, then, that soldiers on patrol kept a photograph of McCann in their pockets, for he was top of the Royal Ulster Constabulary’s ‘most wanted list’

It killed seven civilians including kitchen staff and a gardener, and wounded 19 others.

The year before, McCann was suspected of shooting dead two soldiers, including Corporal Robert Bankier, one of the first British servicemen murdered in the Troubles. The Official IRA would boast that he was responsible for 15 killings.

Little wonder, then, that soldiers on patrol kept a photograph of McCann in their pockets, for he was top of the Royal Ulster Constabulary’s ‘most wanted list’.

Despite his ruthlessness – he was also known for ‘tarring and feathering’ punishments – the 24-year-old was to Republicans the ‘Che Guevara’ of their cause, an IRA poster boy.

On April 15 1972, when a plain-clothed RUC Special Branch officer spotted McCann – disguised with dyed black hair and dark glasses – in Joy Street in the Markets area of Belfast, he asked three soldiers at a vehicle checkpoint for help.

As the officer, who has never been identified, approached his target, McCann pushed him away before fleeing. Shouts of ‘halt’ rang out as McCann began darting from side to side before the three members of 1st Battalion Parachute Regiment opened fire.

McCann was hit three times. As he lay dying, he told one of the soldiers: ‘You have got me cold. I have no weapon.’ 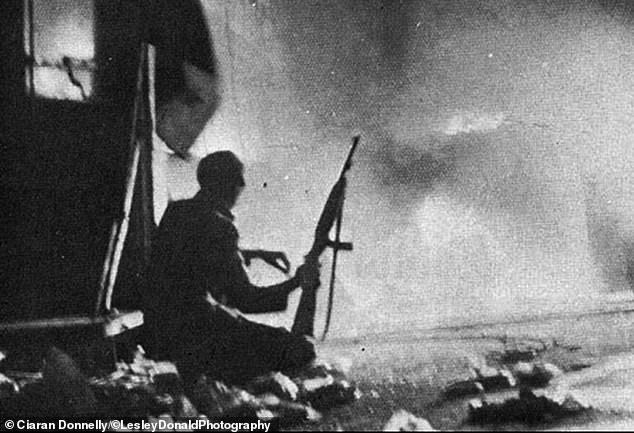 Photograph said to show Joe McCann with an American M1 carbine during a gun battle for Inglis Bakery in Eliza Street in The Markets area of Belfast in 1972. On April 15, he was shot and killed after being spotted in the area. Forty-nine years after the event, Soldier A and Soldier C, sitting in what would usually be the jury box, were on trial for McCann’s murder

As one paratrooper known as Soldier C who fired his weapon would later tell investigators: ‘It was over in a blink. Literally seconds.’

In retaliation, the IRA shot five soldiers in the following days, killing three. But it is that split-second during the bloodiest year of the Troubles – 170 British soldiers were killed in 1972 – that led to the astonishing events in Belfast Crown Court yesterday.

Forty-nine years after the event, Soldier A and Soldier C, sitting in what would usually be the jury box, were on trial for McCann’s murder. Soldier B had died several years ago.

Bespectacled and balding, in smart suits, surgical face masks and wearing headphones to help their hearing, they looked every year of their respective ages of 71 and 70. The trial – taking place 11 years after the men gave interviews to the now-defunct Historical Enquiries Team of the Police Service of Northern Ireland – was supposed to last four weeks.

The first prosecution of soldiers relating to ‘legacy’ investigations into Troubles deaths, it was being followed intently by up to 200 British veterans fearing prosecution over service in Ulster.

In short, the lives of not just Soldiers A and C, but many others, were on the line. 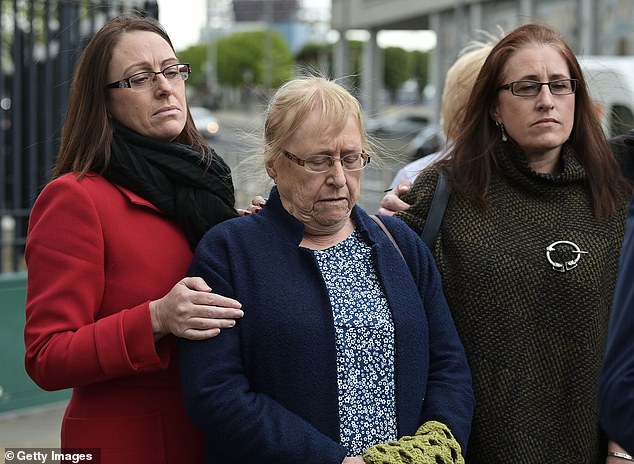 Yesterday, the case spectacularly collapsed after a judge threw out crucial statements relied upon by the prosecution. Given a chance to appeal, the Crown decided to fold. The trial ended on the sixth day. Pictured: Anne McCann (centre), widow of Joe McCann, and other family members react outside following the collapse of the trial

Yesterday, the case spectacularly collapsed after a judge threw out crucial statements relied upon by the prosecution. Given a chance to appeal, the Crown decided to fold. The trial ended on the sixth day.

John Taylor went on to become deputy leader of the Ulster Unionist Party. Now 83 and a crossbench peer, he added his voice to those condemning the decision to haul elderly soldiers to court without new evidence.

Referencing the Overseas Operations Bill, which passed through Parliament providing protection for those who served in Iraq and Afghanistan, but ignoring those who were in Northern Ireland, Lord Kilclooney said: ‘I deplore the fact that such cases can arise 50 years after the event.

‘It is cruelty for people who are in their seventies or eighties.

‘I am shocked the Conservative Government has excluded service in Northern Ireland from the new legislation to restrict the possibility of prosecution of servicemen and servicewomen elsewhere.’

While hundreds of Republican and Loyalist terrorists were freed early under one of the most controversial elements of the 1998 Good Friday Agreement, potentially dozens of ex-servicemen are at risk of prosecution as police comb through unsolved deaths.

The Government has repeatedly promised legislation to protect those who have been cleared of wrongdoing following repeated reinvestigation.

But critics accuse the authorities of kowtowing to Sinn Fein – the political wing of the IRA – to keep peace in Ulster. 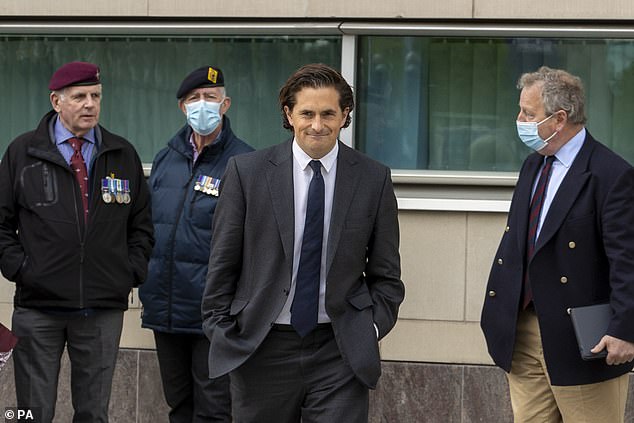 As Soldier C said when he spoke to this newspaper in 2016: ‘Myself and many others like me who were also doing their duty are now being hounded by a cabal residing in Belfast who say they are seeking “justice”.

‘But my own opinion is that they are seeking revenge.’

Millions of pounds of public money were spent on the landmark trial. And at the heart of its failure is the salient question: can there ever be a fair trial into events that took place so long ago?

Soldiers A and C first gave statements on the day of McCann’s shooting. Ordered to comply and not given access to any legal representation, their trial heard the Royal Military Police probe was ‘pretty hopeless and inadequate’.

At the time, the RUC did not take statements from soldiers even if they had been responsible for a death, a practice described by trial judge Mr Justice John O’Hara as ‘appalling’.

In September 1972, Northern Ireland’s director of public prosecutions Sir Barry Shaw advised there should be no prosecution. An inquest jury the following year returned an ‘open’ verdict.

The soldiers got on with their lives. Soldier A retired as a warrant officer in the late 1980s having served in Saudi Arabia as well as being assigned to UN peacekeeping forces in Cyprus.

Soldier C, seconded to the special forces, was awarded the British Empire Medal for his work in Northern Ireland.

The Queen wrote to him to say: ‘I congratulate you on the award of the British Empire Medal which you have so well earned. I send you my best wishes for your future happiness.’ He retired from the Army in 1993 to work in security.

Having led exemplary, law-abiding lives, it wasn’t until 2007 that the death of McCann would come back to haunt the men. Two years earlier, the PSNI had launched the arms-length Historical Enquiries Team to provide answers to families bereaved during the Troubles.

It worked chronologically and began looking into McCann’s death.

If any new lines emerged, the body, staffed by retired police officers and civilians, could refer them to the police for a fresh probe.

By this time, Soldier A had little memory of the incident, having suffered a serious stroke.

But in March 2010, the McCann family wrote to the soldiers via their solicitors.

In keeping with the apparent purpose of the HET inquiry, they said they were seeking ‘truth, not retribution’, urging the men to cooperate by saying that, like them, McCann was just a ‘working-class man’ who would not have born a grudge against them.

As Justice O’Hara concluded, this all ‘added to the ambiguity’ around the purposes of the HET. Investigators themselves believed it was solely a fact-finding mission. A week after the McCann letter, Soldier A was interviewed under caution at the offices of his London solicitor, followed by Soldier C two days later.

Agreeing, in the spirit of openness, to answer questions where they could, the two largely relied on their forced 1972 statements.

Both men were told after their cooperation that no new lines of inquiry had been discovered and the matter would end there.

A report from the HET stretching to more than 100 pages was provided to McCann’s family.

But he instead referred the death of McCann to then director of public prosecutions Barra McGrory QC for a review, after which charges followed.

MPs in Westminster questioned whether ‘political decision-making’ was at play because there was no new evidence. Mr McGrory insisted his office had mounted many more cases against paramilitaries.

Soldier A described his treatment as ‘immoral and disgusting’, suggesting: ‘Appeasing the bloody Republicans in Northern Ireland is what this boils down to.’

Soldier C said: ‘I was awarded the British Empire Medal. And yet here I am, being persecuted. I would like someone in power to explain in detail how this has been allowed to happen.

‘Why are they not going after the IRA men and women who carried out their campaign of murder, bombing and maiming?’

An attempt to stay the proceedings as an abuse of process failed, leaving the men with no choice but to face the murder charge.

The trial of Soldiers A and C centred on the statements they made about the McCann shooting in 1972 and to the HET in 2010.

Justice O’Hara was quick to dismiss the 1972 interviews as ‘compelled’ accounts, leaving the prosecution with only the interviews given 38 years later. But, as we have seen, the soldiers relied on their 1972 interviews in 2010.

The trial was effectively to unravel on only the second day. David Hart, a retired police officer who interviewed the soldiers for the HET, was called by the prosecution.

Rather than aiding the Crown, he agreed with Justice O’Hara that he never even ‘contemplated’ that his interviews would be used in a criminal prosecution.

He added: ‘In fact, can I say that when the PSNI came to see me regarding prosecution I asked if they would interview them [the soldiers] again because that’s what I fully expected, but that wasn’t the case.’

In a damning ruling Justice O’Hara slammed the process of charging the defendants with murder without a police interview.

Which poses the still unanswered question, why was it ever allowed to get so far?