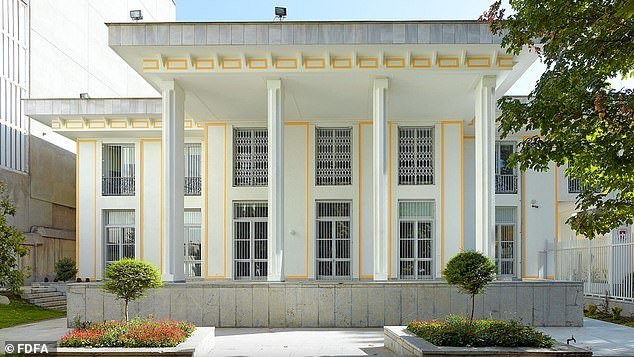 Embassy’s first secretary, 51, died after falling from a building in northern Tehran

By Lauren Lewis For Mailonline and Reuters

A senior employee at the Swiss embassy in Tehran died on Tuesday after falling from a high-rise building where she lived in the north of the city.

The 51-year-old diplomat was the embassy’s first secretary, the second-highest ranking employee,a spokesman for emergency services was quoted as saying by the semi-official news agency Mehr.

She lived on the 18th floor of the building in the affluent district of Kamranieh where she fell to her death, the semi-official ILNA news agency said.

Neither report contained any further information about the circumstances of her death. The Swiss Embassy has not yet formally announced the news.

The first secretary’s body was discovered by a caretaker who arrived at the property on Tuesday morning.

He noticed the diplomat was not home, but that her belongings had not been moved, Iran’s Fars News Agency reported.

He eventually found her lifeless body and phoned emergency services.

An initial examination of the body found she had injuries to her head and arms. A detailed post-mortem will now be carried out.

The body was found in the Kamranieh district of Tehran, which is known for its luxurious high-rise buildings and is home to many of Tehran’s diplomats and foreign officials.