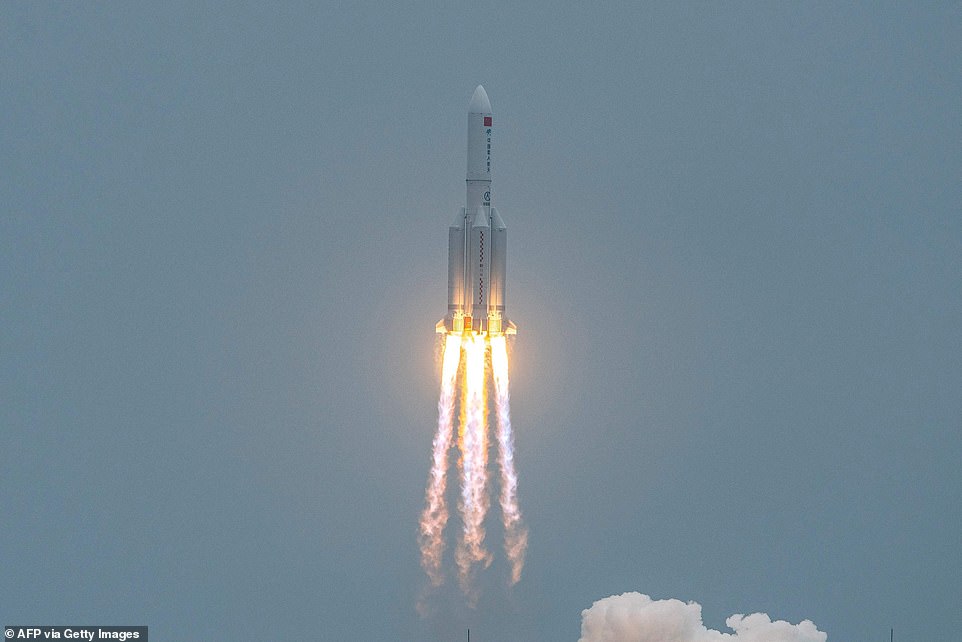 Long March 5B, the out-of-control 21-ton Chinese rocket, is expected to crash back to Earth on Saturday (May 8), possibly hitting an inhabited area, the US government warns.

A Department of Defense spokesperson revealed the date of its expected reentry into Earth’s atmosphere, but said its exact entry point can’t currently be determined.

Daily updates on its location are being posted on Space Track, and the government will be providing additional information ‘as it becomes available’, the spokesperson added.

Other satellite trackers have also detected the 100-foot-long, 16-foot-wide rocket body, now designated the name ‘2021-035B’, travelling at more than four miles per second.

Tianhe was launched from the Wenchang Space Launch Centre in Hainan, China on the Long March 5B, China’s largest carrier rocket, on Thursday (April 29).

China’s 21-ton Long March 5b core stage rocket is orbiting the planet in a path that could lead to the massive vehicle crashing back to Earth within the next few days, experts warns. Pictured is the rocket when it launched last week 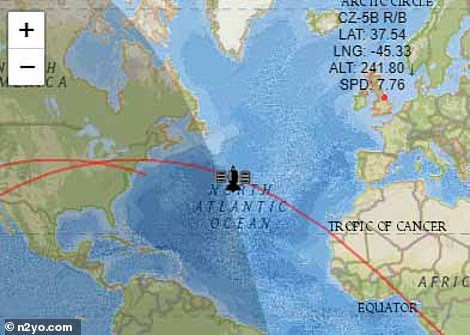 Position of the Long March 5B rocket, according to the N2YO satellite tracker, as of Wednesday morning (May 5)

‘U.S. Space Command is aware of and tracking the location of the Chinese Long March 5B in space, but its exact entry point into the Earth’s atmosphere cannot be pinpointed until within hours of its reentry, which is expected around May 8,’ said US Department of Defense spokesperson Mike Howard.

Earlier this week, an expert said that the rocket’s core stage – essentially the backbone of the rocket – will re-enter Earth’s atmosphere ‘uncontrolled’.

Jonathan McDowell, an astronomer who tracks objects orbiting Earth, told SpaceNews that its path takes it ‘a little farther north than New York, Madrid, Beijing and as far south as southern Chile and Wellington, New Zealand’.

It could land anywhere in this range, although it is hoped that most of it would burn up in the atmosphere prior to hitting Earth.

Debris that doesn’t burn up could hit the oceans or uninhabited areas, ‘but the risk remains of damage to people or property’, SpaceNews reported.

Space debris trackers observed it moving slowly and unpredictably to Earth over the past few days, and reentry of the vehicle would be one of the largest uncontrolled descents on record. 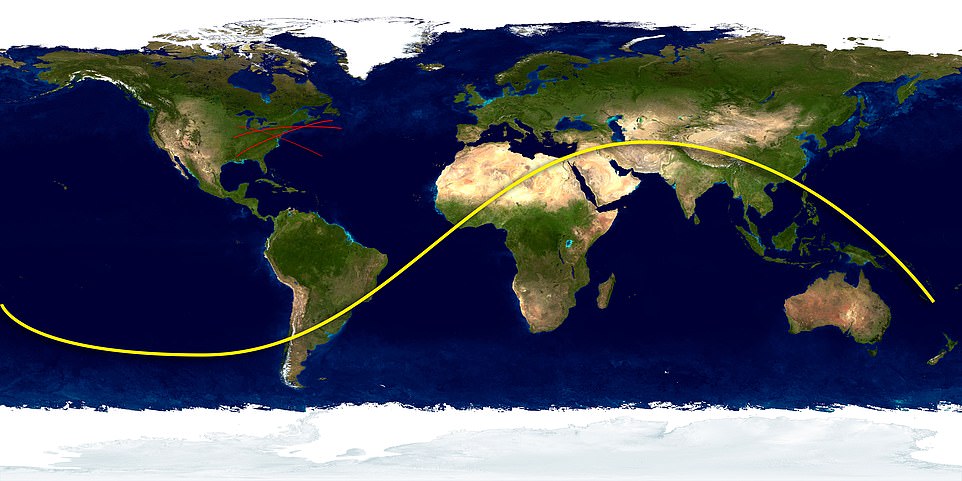 Analysing the rockets orbit in space, experts have generated a predicted trajectory for when the core stage falls back to Earth. Pieces that survive the burn up in the atmosphere could land just north of New York, Madrid, Beijing or as far south as southern Chile and Wellington, New Zealand ‘ 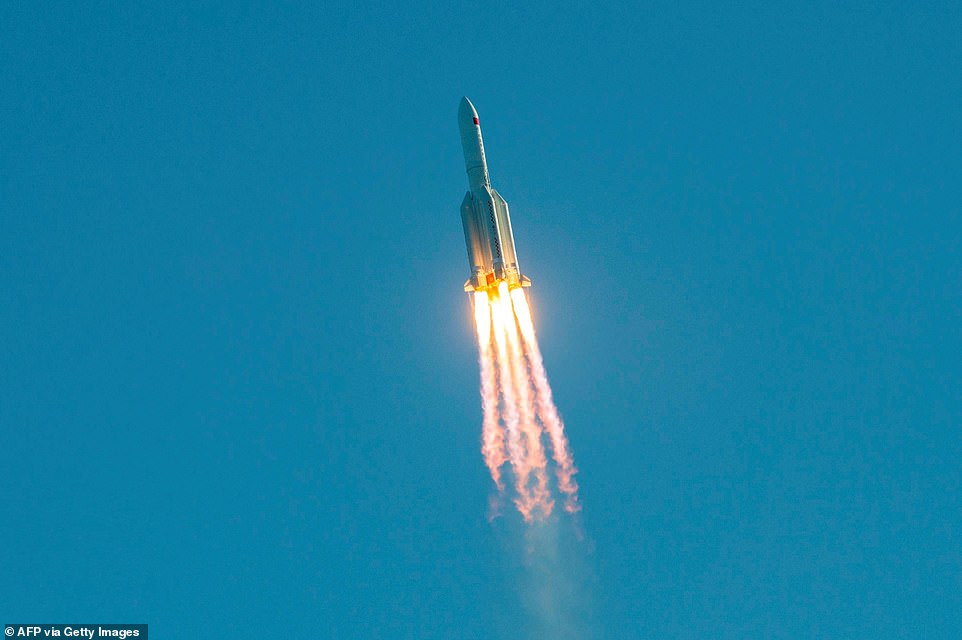 China previously launched Long March 5b in May 2020 (pictured) to test the vehicle in preparation of sending people to the moon, but this mission also ended with an uncontrolled reentry

McDowell said the previous Long March 5B launch saw the fourth biggest uncontrolled re-entry ever in May last year.

At the time, it splashed down in the waters off the west coast of Mauritania just off the coast of West Africa, after flying over Los Angeles and New York City.

Speaking to The Guardian, McDowell said: ‘Last time they launched a Long March 5B rocket they ended up with big long rods of metal flying through the sky and damaging several buildings in the Ivory Coast.

‘Most of it burned up, but there were these enormous pieces of metal that hit the ground. We are very lucky no one was hurt.’ 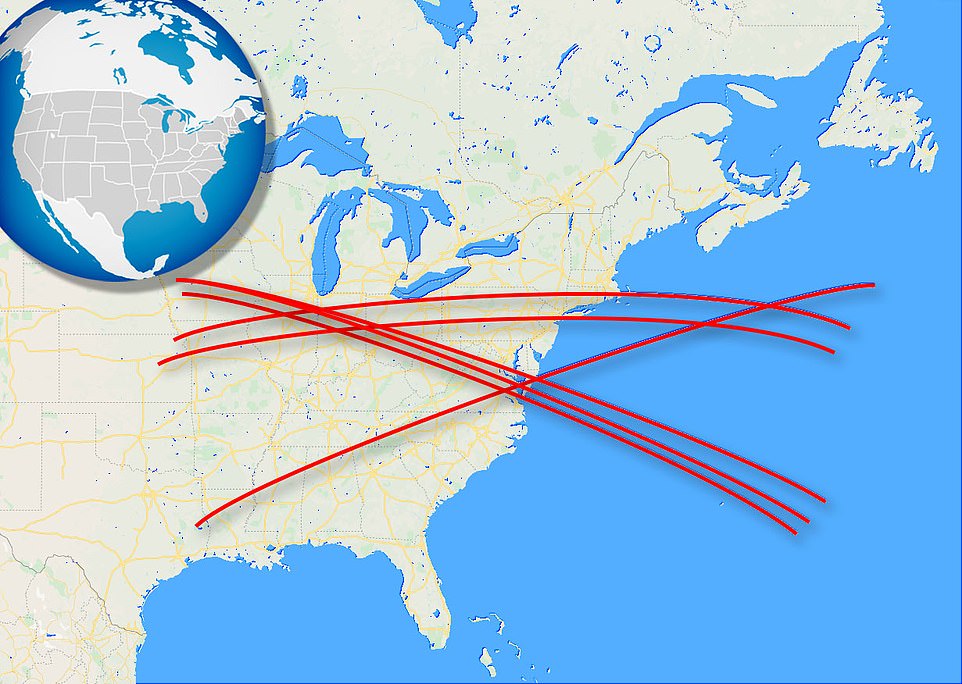 Pictured is predicted paths of the rocket over the eastern coast of the US. Calculations reveal six possible paths Long March 5B could take 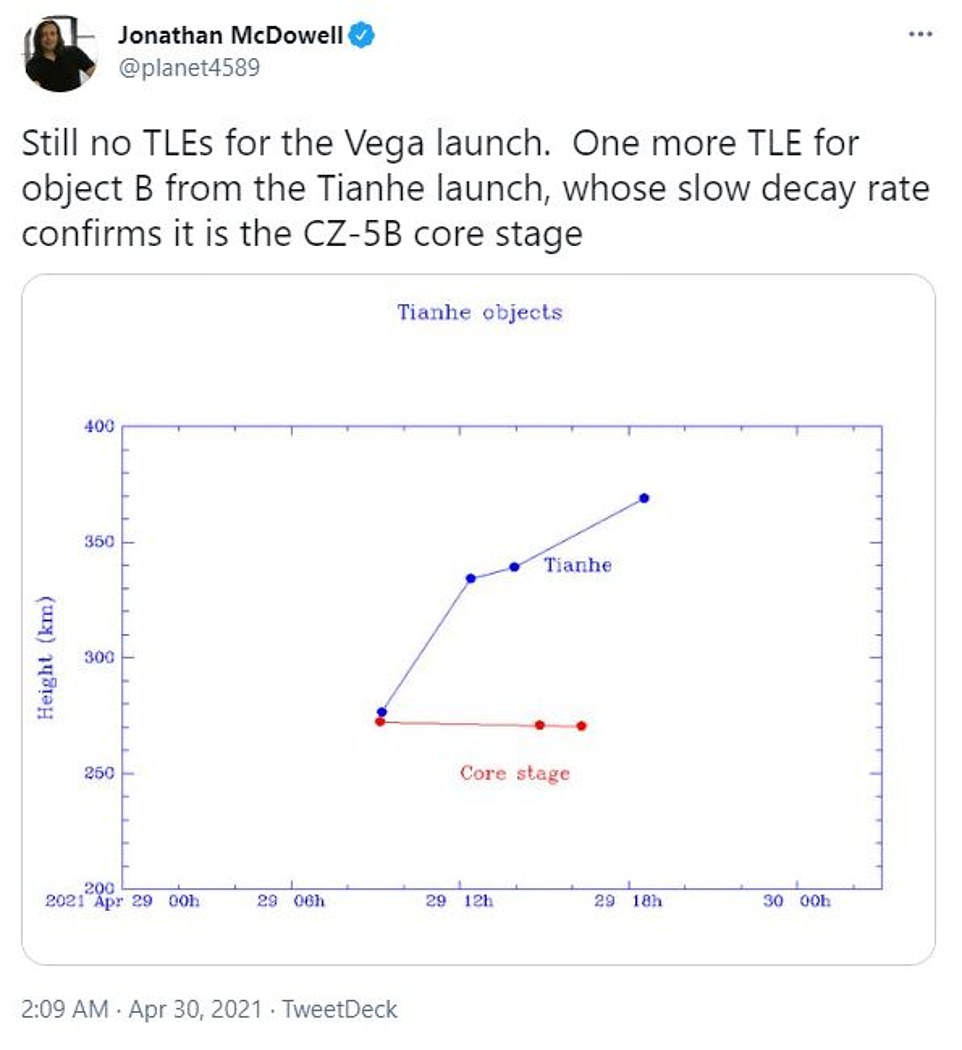 He added that the Long March 5B is seven times more massive than the Falcon 9 second stage that caused a lot of attention a few weeks ago when it re-entered above Seattle.

‘I think by current standards it’s unacceptable to let it [the core stage] re-enter uncontrolled,’ he added.

What’s more, the Tianhe launch was just the first of 11 missions needed to complete China’s upcoming space station, intended to rival the ISS.

China aims to complete its Chinese Space Station, known as Tiangong (Heavenly Palace) by the end of 2022, state media reported, after more modules are launched. 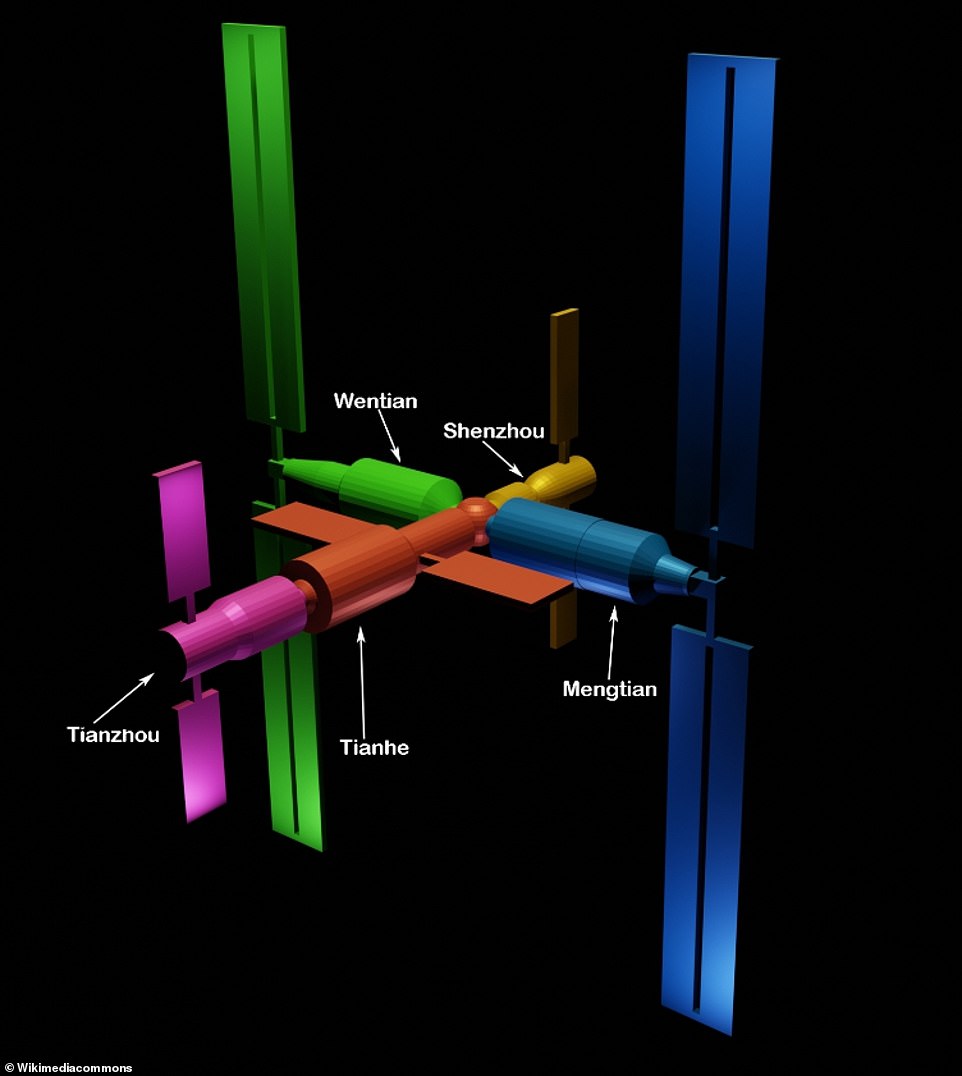 In later missions planned for 2021 and 2022, China will launch the two other core modules, four manned spacecraft and four cargo spacecraft.

Work on the space station programme began a decade ago with the launch of a space lab Tiangong-1 in 2011, and later, Tiangong-2 in 2016.

China aims to become a major space power by 2030 to keep up with rivals, including the US, Russia and the European Space Agency, and create the most advanced space station orbiting Earth.

ISS, currently in orbit, took 10 years and more than 30 missions to assemble from the launch of the first module back in 1998.

The ISS is backed by five participating space agencies – NASA (US), Roscosmos (Russia), JAXA (Japan), ESA (Europe), and CSA (Canada) – but China was originally barred from participating by the US.

China has ramped up its space programme with visits to the moon – which returned the first moon samples to Earth in more than 45 years years – and the launch of an uncrewed probe to Mars, as well as construction of its own space station. 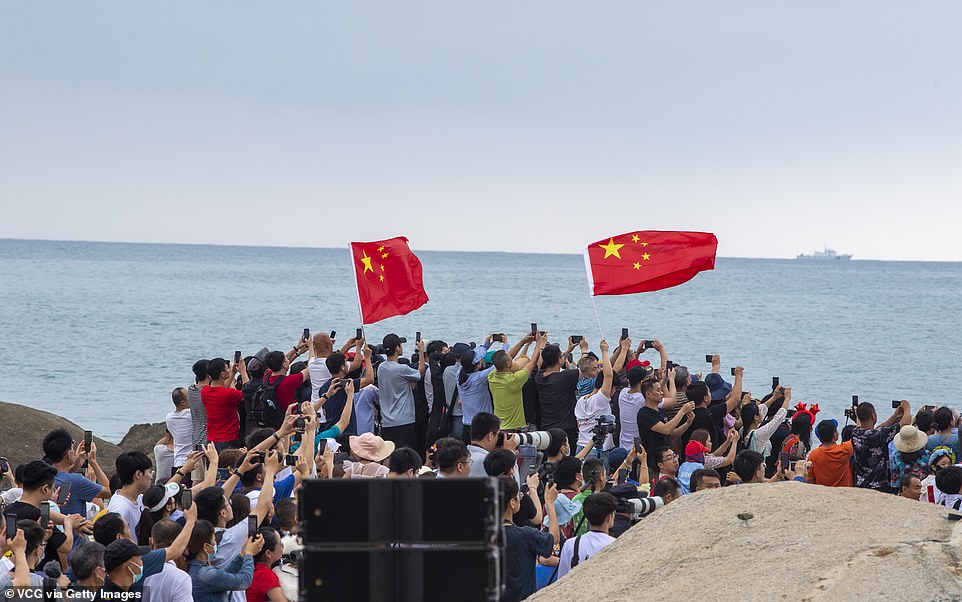 Officials from the Chinese space agency are working to become a space superpower alongside the US and Russia.

They have already sent the first lander to explore the far side of the Moon – sharing photos from the part of our nearest neighbour we rarely see as part of the Chang’e-4 mission.

In November 2020 they sent the Chang’e-5 space probe to the Moon to collect and return the first samples of lunar soil in 45 years.

This was done in collaboration with the European Space Agency who provided tracking information for the Chinese spaceship.

Chang’e-6 will be the first mission to explore the south pole of the Moon and is expected to launch in 2023 or 2024.

Chang’e-7 will study the land surface, composition, space environment in an overall mission, according to the Chinese space authority, while Chang’e-8 will focus on technical surface analysis.

China is also reportedly working on building a lunar base using 3D printing technology and sending a future crewed mission to the surface.

Mission number eight will likely lay the groundwork for this as it strives to verify the technology earmarked for the project.

The CNSA is also building an Earth-orbiting space station where Chinese astronauts will conduct scientific experiments, similar to the crew of the ISS.

The agency also launched a mission to Mars in summer 2020 which will see them land a rover on the surface of the red planet in February 2021.

China is also said to be working on a project to build a solar power generator in space, that would beam energy back to Earth and becoming the largest man made object in orbit.

They also have a number of ambitious space science projects including satellites to hunt for signs of gravitational waves and Earth observation spacecrafts to monitor climate change.