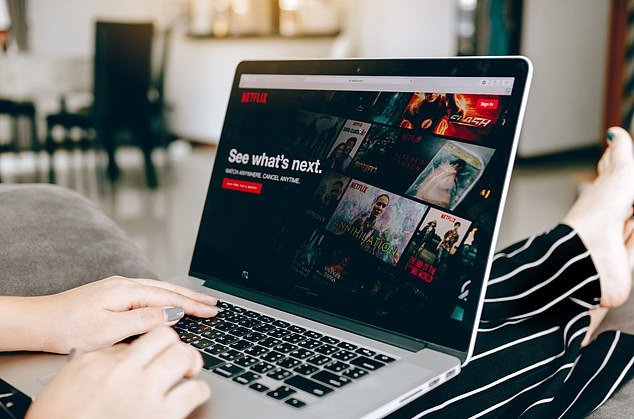 Netflix is allegedly testing a new supplemental service called N-Plus, which could complement a standard Netflix account but for an additional price.

N-Plus would feature behind-the-scenes content for its TV programmes and films, as well as podcasts, user-generated playlists, how-to videos and more.

In a survey first noticed by Protocol, Netflix asked its users how they would feel about such a service, which it called a ‘future online space’.

‘N-Plus is a future online space where you can learn more about the Netflix shows you love and anything related to them,’ the survey said.

Introducing a new paid service can be interpreted as an attempt by Netflix, the world’s biggest streaming service, to help boost user numbers and revenue

Netflix users have slammed the ‘greed’ of the streaming giant for hiking subscription fees by up to £24-a-year.

The firm announced it was increasing its standard package – which allows two screens to access an account, as well as HD – by £1 per month, from £8.99 to £9.99, in January.

Netflix said the price hikes are essential to reflect the ‘significant investments’ it has made in new TV shows and films.

However, the move has angered many, with users rushing to vent their frustration on social media.

The number of households in the UK subscribing to Netflix grew to reach more than 15 million in the third quarter of 2020, according to Statista.

The Netflix survey also mentioned a feature that would let N-Plus subscribers build  custom playlists and share them with friends via a link, posted to Facebook, for example.

Another possibility, according to Protocol, is N-Plus listing all the music from a film or TV show and giving people the ability to create and share playlists – just like music playlists created on Spotify.

Another part of the survey hinted at giving subscribers the power to even contribute to how Netflix content currently in development turns out.

N-Plus users could ‘learn about a planned show (pre-production) and influence its development with feedback before filming has finished’, it said.

From the survey, it sounds like N-Plus could also consist of some kind of encyclopedic database, akin to Wikipedia or IMDB.

The survey said: ‘You might get to N-Plus when you Google search for anything about a show or actors from a show you’re interested in, or you might find links to it in messages you get from Netflix, or there might be a link to it on pages inside the Netflix app.’

A Netflix spokesperson told MailOnline the firm doesn’t ‘have anything to add’ to what was revealed in the Protocol report.

It’s not known whether N-Plus would definitely roll out, how far along the development stage it is or even if it would be a free or paid service.

But according to Protocol, Netflix wants to have the rights to provide users with more than just TV shows and films.

Introducing a new paid service could be interpreted as an attempt by the firm to sustain its dominance in streaming and help boost user numbers and revenue.