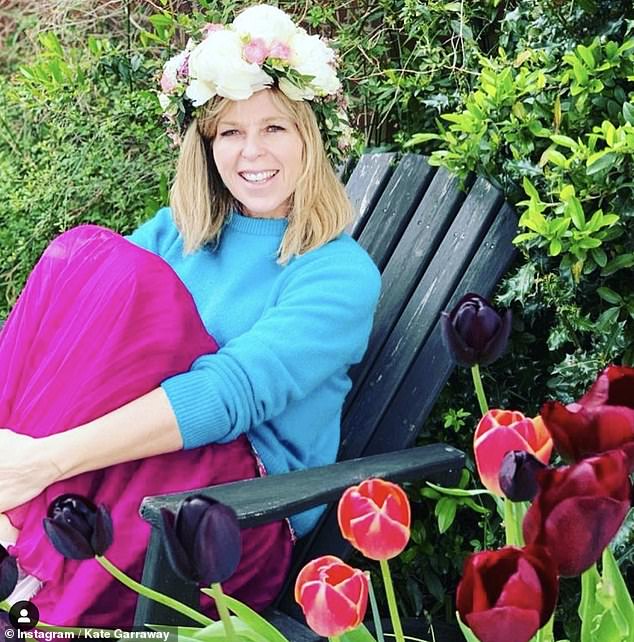 Kate Garraway looked radiant as she relaxed in her ‘happy place’ while rocking a pretty flower crown on Sunday.

The Good Morning Britain presenter, 54, beamed a smile in the lovely image and told fans that being outside is ‘like therapy’ to her.

Sharing the stunning image to Instagram, Kate also revealed that she ‘can’t wait’ for her husband Derek Draper, who is recovering at their home after a year in intensive care following his Covid battle, to get ‘stronger’ so he can join her in their garden.

‘My garden is definitely my happy place’: Kate Garraway looked radiant as she relaxed outside while rocking a pretty flower crown on Sunday

Kate appeared to be in good spirits as she smiled in the snap while rocking a bright outfit and holding onto her knees.

‘My garden is definitely my happy place & even though it’s not big or fancy I love being out there even if the weather isn’t perfect, because just being outside listening to the rain fall and the wind blow through the leaves is like therapy for me.

‘I can’t wait for Derek to get stronger so can get him outside too as know it’ll be good for him. 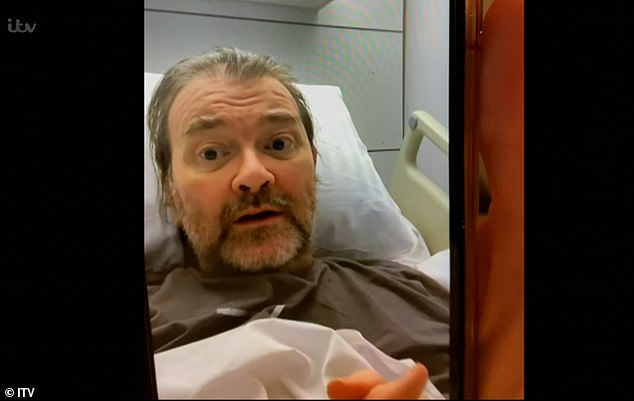 Hope: The GMB presenter, 54, also revealed that she ‘can’t wait’ for her husband Derek, who is now recovering at their home following his Covid battle, to get ‘stronger’ so he can join her in their garden (pictured during documentary about his recovery, Finding Derek)

‘Admittedly he may not want to wear a gorgeous blossom crown like me! But I am loving it & going to wear it all day to celebrate #gardendayUK.

‘I would love to hear how you are celebrating your outside space today & what it means to you generally so do share! #thepowerofhope’

Kate and Derek’s trauma began at the start of the pandemic last year when he was taken to hospital with very low oxygen levels in March. 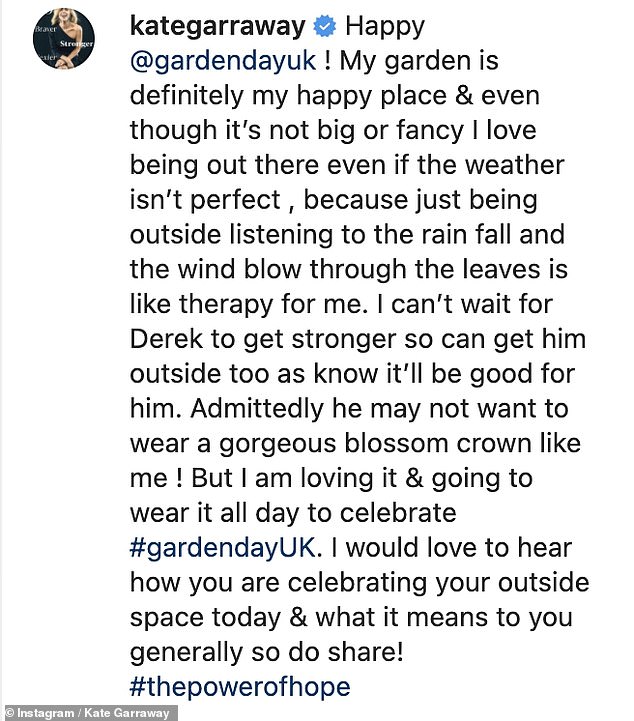 Relaxing: Kate explained how sitting in the fresh air and being in her garden is ‘like therapy’

His condition worsened and he became one of the most stricken patients, remaining in intensive care for a year and despite having returned home he is seriously ill and doctors say he was the most seriously sick patient to have survived the virus.

The former Blair lobbyist returned to their home in April, which Kate has drastically overhauled to house Derek’s limited mobility.

Kate ‘spent thousands’ adapting her North London house to suit Derek’s needs as he is required to have 24/7 care while he continues his recovery at home.

Kate revealed the changes she made to the family home on her heartbreaking documentary Finding Derek, which aired in March, where she added a wheelchair lift, wet room, alarm system and a ground-floor bedroom to the house. 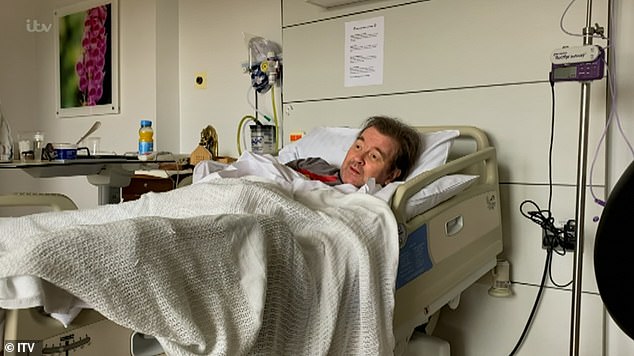 Awful: Derek was in intensive care for a year after being taken to hospital with very low oxygen levels in March 2020 (pictured during documentary about his recovery, Finding Derek)

The presenter installed the lift so that her home is accessible for Derek, who will be using a wheelchair during his recovery at home.

Kate has also converted the ground floor lounge into his new bedroom, which has been fitted with a hospital bed for him because the virus has damaged the former lobbyist’s muscles.

At the time the show was recorded, the wet room was still being worked on and a builder was seen putting down plaster and preparing to install a toilet inside.

Kate explained to viewers: ‘At the moment what we’re doing, we’ve got an occupational therapist that deals with the lay out of the home, looking at putting in a wet room – basically, ground floor living.

‘He’ll either be on a stretcher or a wheelchair. And also they’re trying to figure out how to put a lift in the garden.’ 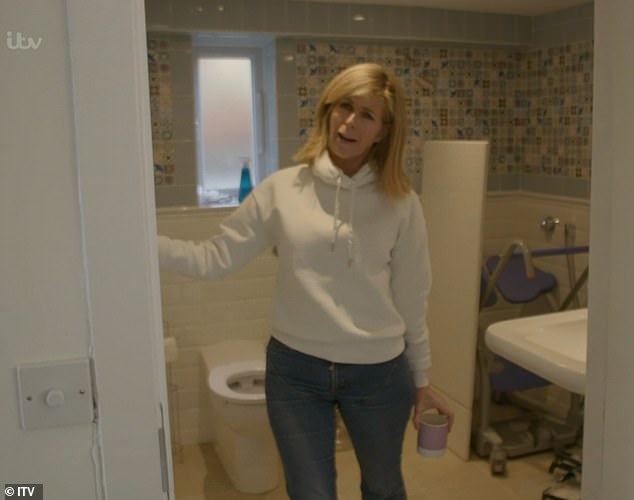 Changes: Kate has reportedly ‘spent thousands’ adapting her North London house for Derek’s return as he’s is required to have 24/7 care while he continues his recovery at home 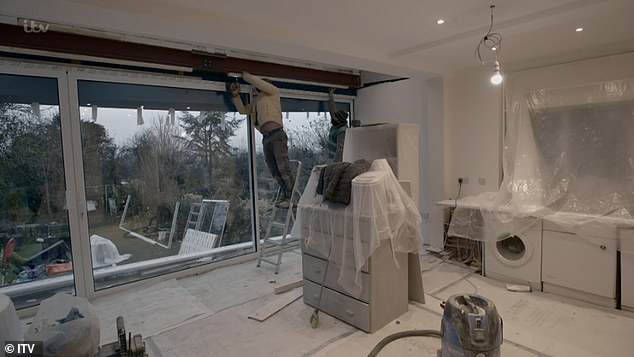 Adaptions: Kate added a wheelchair lift, wet room, alarm system and a ground-floor bedroom to the house (pictured during renovations)

Kate also revealed that she will sleep downstairs in a ‘put-me-up bed’ so that she can be close to Derek while she picked small mosaic tiles that are Derek’s favourite for the new bathroom.

The presenter also has a team of carers coming into the house and she said it’s like ‘having a ward at home now because he needs so much equipment’, her co-host Ben Shephard told ITV’s Good Morning Britain recently.

Other features in the home include floor-to-ceiling windows looking out into the garden, which allow Derek to watch his and Kate’s children Darcey, 15, and Billy, 11, outside.

The TV presenter has had their family home adapted so that Derek could come back and receive round-the-clock care at their North London property.

And despite having an extremely tough year, Kate recently said on Good Morning Britain that she never thought about giving up. 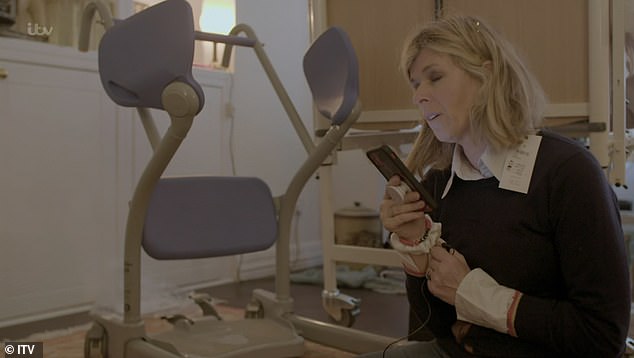 Candid: The mother-of-two revealed the changes she made to the family home on her heartbreaking documentary Finding Derek

When asked about the prospect of giving up during her year of hell, Kate said: ‘No and really, what is the choice? If I give up, I’d be throwing in the towel…

‘There is hope, you still have to think of hope in future and lots of people helped me have hope for the future’.

And speaking about holding things together and their relationship now on GMB on Tuesday, Kate said: ‘It’s strange, you think that Derek was his own person, big force of nature, and now everything is so quiet, we have to feed him and help with his medications and do things for him…

‘It’s a different relationship, now I’m thinking that there’s a sort of tenderness, it is love and he feels it back. We’ll hopefully be able to get some balance in that, so he wants to have some pride. He wants to look at his wife.’ 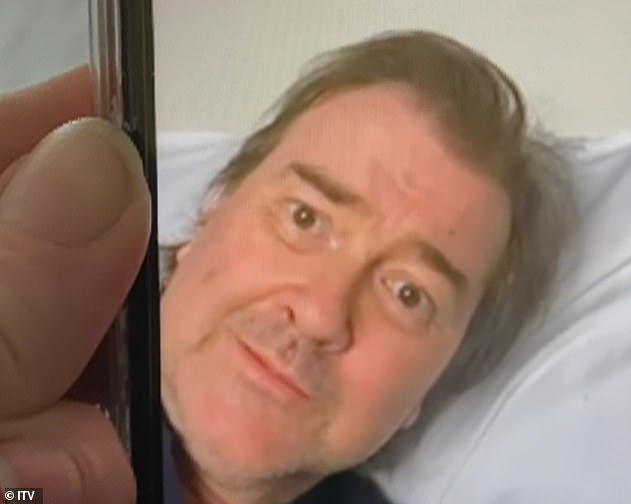 Back then: Kate and Derek’s trauma began at the start of the pandemic last year when he was taken to hospital with very low oxygen levels in March