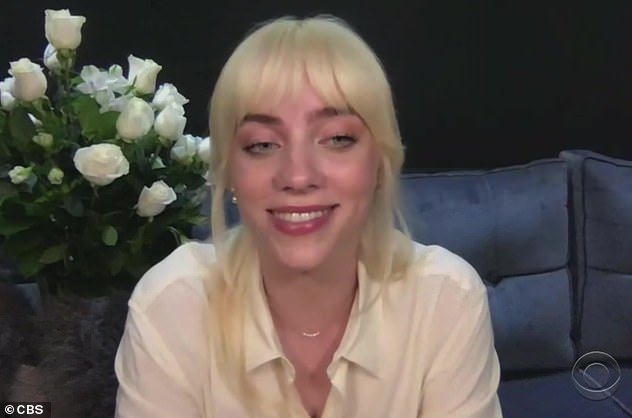 Billie Eilish admitted to talk show host Stephen Colbert on Monday that she previously wore a wig of herself when she was on his show two months ago.

The singer, 19, debuted a new blonde look in March after becoming a pop star with black-and-slime-green hair and Stephen, 56, immediately sought some clarification about Internet rumours regarding her tresses.

With wigs and costumes widely available for her old look, Billie explained that she had opted to wear one of the hair pieces borrowed from her old image as she was yet to be willing to showcase her blonde locks.

Internet rumors: Billie Eilish admitted to talk show host Stephen Colbert on Monday that she previously wore a wig of herself when she was on his show two months ago

During the appearance, Stephen asked: ‘There have been a lot of rumors out on the Internet and I want you to settle something for me. When you were last here on the show, were you in fact wearing a Billie Eilish wig?’

A video clip was then shown of Stephen remotely interviewing Billie who back then wore a yellow bucket hat over her black-and-green hair.

She then confessed: ‘Steve, I was just as blonde then as I am now. I was wearing a Billie Eilish wig. I was, I was, I was’.

The seven-time Grammy winner said she had pictures from the same day with full blonde hair and wearing the exact same outfit. 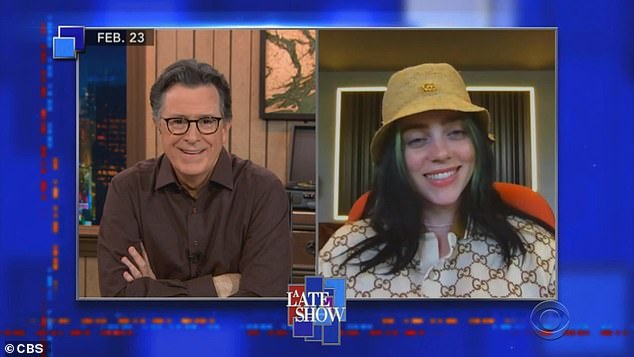 Recent appearance: A video clip was shown of Stephen remotely interviewing Billie who wore a yellow hat over her black-and-green wig while being blonde underneath two months ago 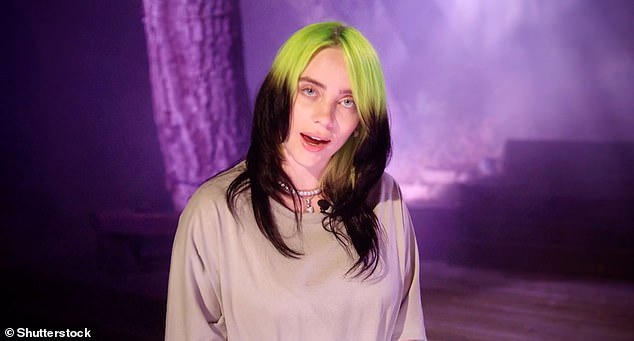 Former look: The 19-year-old singer, shown in August 2020, debuted a new blonde look in March after becoming a pop star with black-and-slime-green hair

Stephen asked Billie if she had to seek out a wig maker and say ‘make me a wig that looks like me because I don’t want anybody to know that I don’t look like that anymore’ as he sought out more details.

She said: ‘So from black to blonde is a big thing and to do it right and to do it where you’re not murdering your hair and keeping it healthy, I did the first process…

‘And then waited like two weeks so that it could kind of heal and then again and waited two weeks and waited a week, and blah blah blah. I just knew it would have these processing periods where it would look insane…