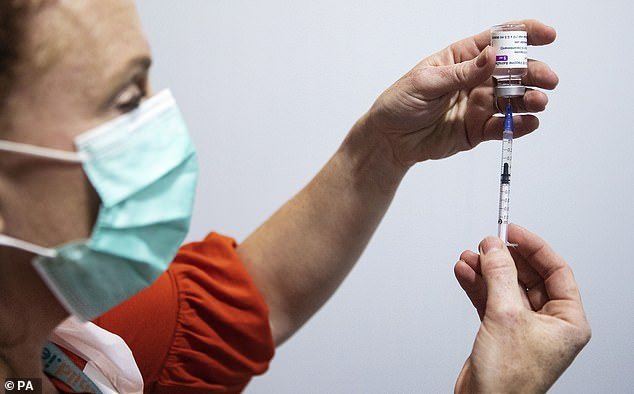 A preservative in AstraZeneca‘s Covid vaccine may trigger a rare overreaction from the immune system that causes blood clots, a scientist has claimed.

Tiny numbers of people given the jab or the one made by Johnson & Johnson have developed a clotting condition that spooked some countries into turning their backs on it.

The reasons for this have been unclear but one German expert has suggested it may begin with a chemical used to make the vaccine.

EDTA, or ethylenediaminetetraacetic acid, might trigger an immune overreaction by forming clumps using platelets in the bloodstream.

EDTA — commonly used in medicines and cosmetics — may make more ingredients of the intra-muscular jab leak into blood vessels.

Dr Andreas Greinacher said they could make the body over-produce antibodies and trigger a second reaction from the immune system which then starts clotting blood.

The clots remain rare and far less of a risk than Covid but people under the age of 40 have been advised to get a different vaccine if they can, to be on the safe side.

The AstraZeneca Covid vaccine remains one of the most widely used in the world because it prevents severe Covid and is widely available, but some countries have restricted its use only for older people who have a higher risk from coronavirus that outweighs danger of side effects (Pictured: A nurse in Dublin fills a syringe with vaccine)

WHAT IS THE THEORY?

Dr Greinacher’s theory hinges on events that may be triggered by the EDTA preservative in the AstraZeneca vaccine, Pharmaceutical Technology reports:

EDTA increases amount of vaccine proteins that leak from muscle into blood;Proteins from the vaccine interact with naturally-circulating platelets to form clumps, activating the platelets;Platelet activation releases another protein (platelet factor 4 or PL4) which sticks to proteins from the vaccine, including virus fragments;The presence of PL4 and proteins in the blood triggers release of antibodies from the immune system;Large numbers of anti-PL4 antibodies trigger a larger immune response, parts of which may be inflammation (swelling) and increased blood clotting in some people.

MHRA boss Dr June Raine said last week the benefits of AstraZeneca’s continue to outweigh the risks for the ‘vast majority of people’.

But she said: ‘The balance of benefits and risks is very favourable for older people but is more finely balanced for younger people.

‘We advise that this evolving evidence should be taken into account when considering the use of the vaccine.’

The Government opted to make it policy to give adults aged 40 or younger a choice of vaccines when they go to their appointment because the rate of the clots with low platelets appeared more common among them, at around one in 60,000 people.

The NHS rollout expanded to 38 and 39-year-olds today for the first time.

One of the main theories for why the clots were happening was that the body was over-producing antibodies that triggered a reaction that led to blood clotting.

Now Dr Andreas Greinacher, a blood expert and immunologist at the University of Greifswald, may be able to explain why, Pharmaceutical Technology reports.

Dr Greinacher and colleagues did studies on mice that suggest that EDTA causes proteins in the vaccine liquid to leak into the bloodstream and activate platelets by bumping into them.