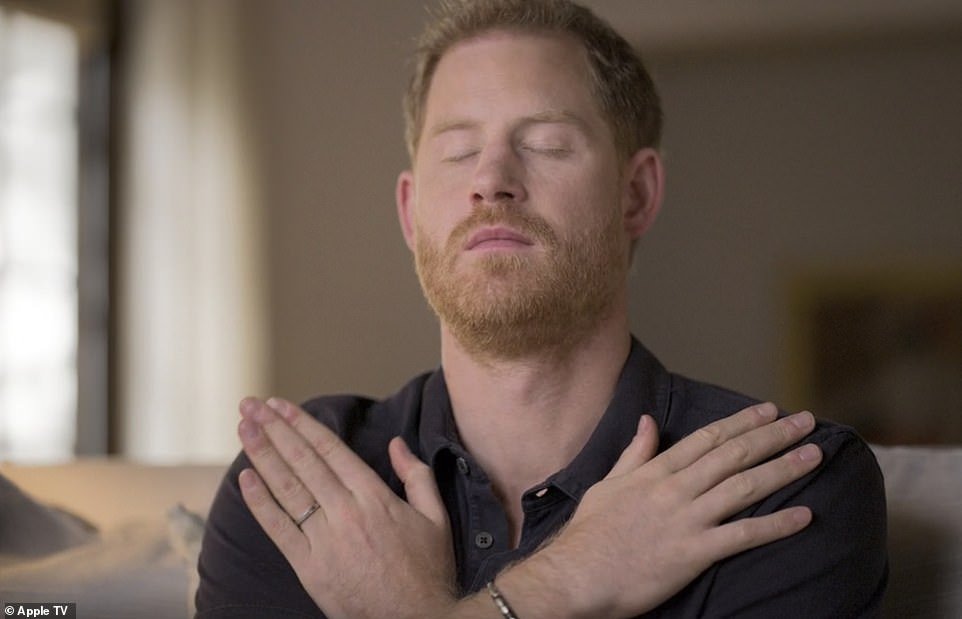 Prince Harry has revealed he becomes ‘tense and update’ whenever he visits Britain, during a therapy session filmed on camera in which he said: ‘London is a trigger.’

The Duke of Sussex said in his new mental health documentary series with Oprah Winfrey that he has ‘always felt worried’ for most of his life when he flies back to London, but only became aware of this after doing therapy.

Appearing on Apple TV’s The Me You Can’t See, Harry told how he remembered ‘everything felt tense’ when he travelled to London ‘because of what happened to my mum, and because of what I experienced and what I saw’.

The Duke, who co-created the documentary, has addressed traumatic memories from his childhood, including the death of his mother Diana, Princess of Wales, and the impact of social media on him as well as his wife Meghan.

He was filmed having a form of therapy known as EDMR (Eye Movement Desensitisation and Reprocessing), which is a treatment technique for helping someone come to terms with traumatic experiences. This saw Harry carry out a series of movements such as closing his eyes and crossing his arms while remembering events in his past.

But royal biographer Angela Levin, author of Harry: Conversations With The Prince, tweeted: ‘I felt watching Harry during his therapy session was a huge invasion of his privacy. Extraordinary that he allowed that to happen.’ 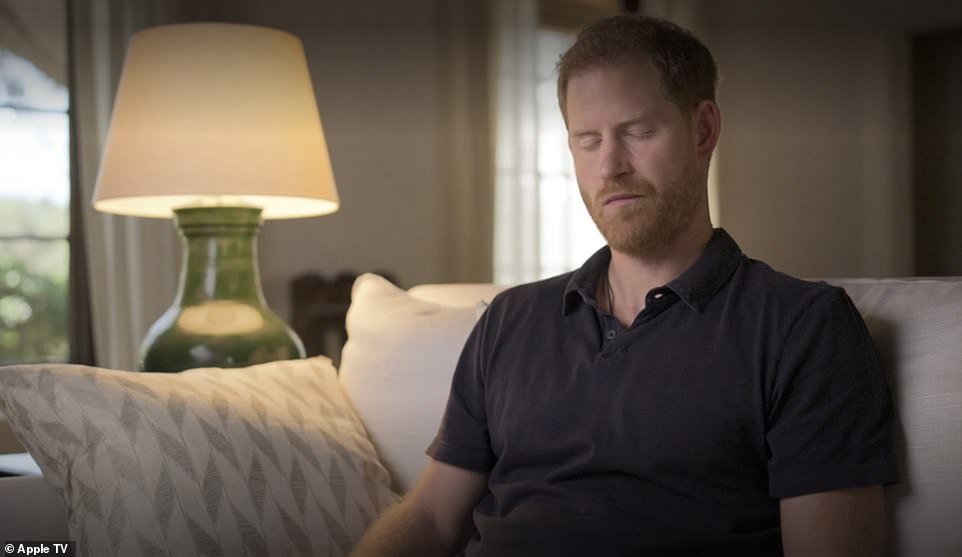 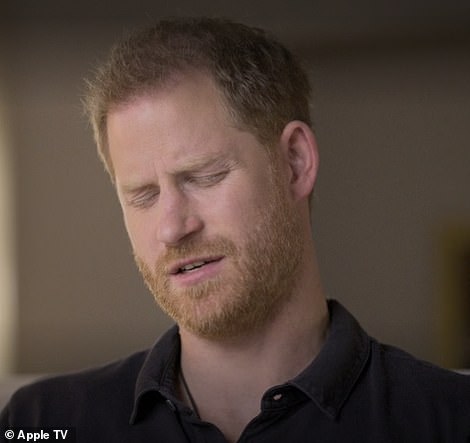 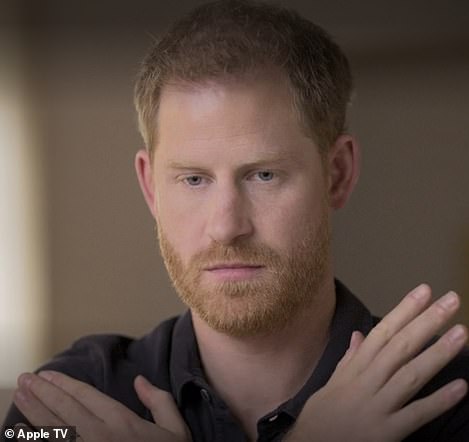 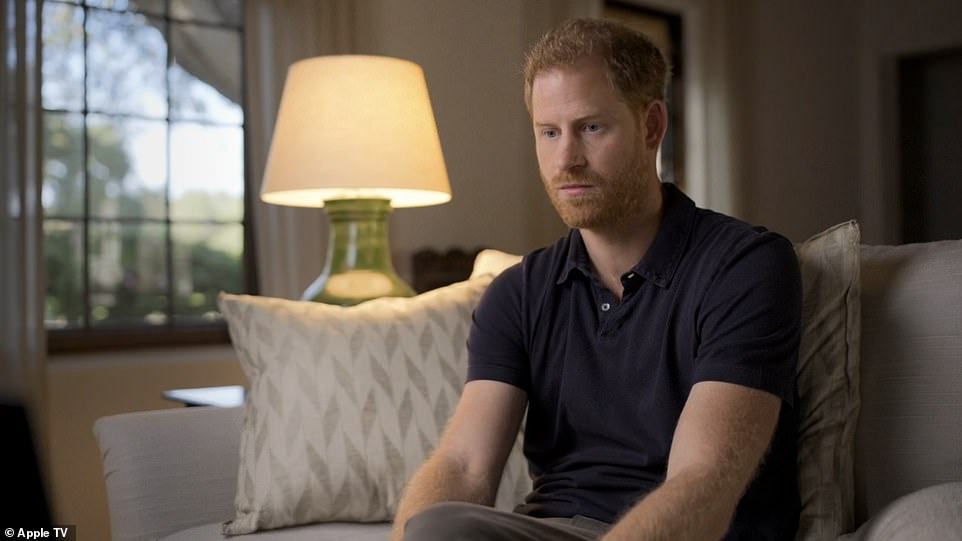 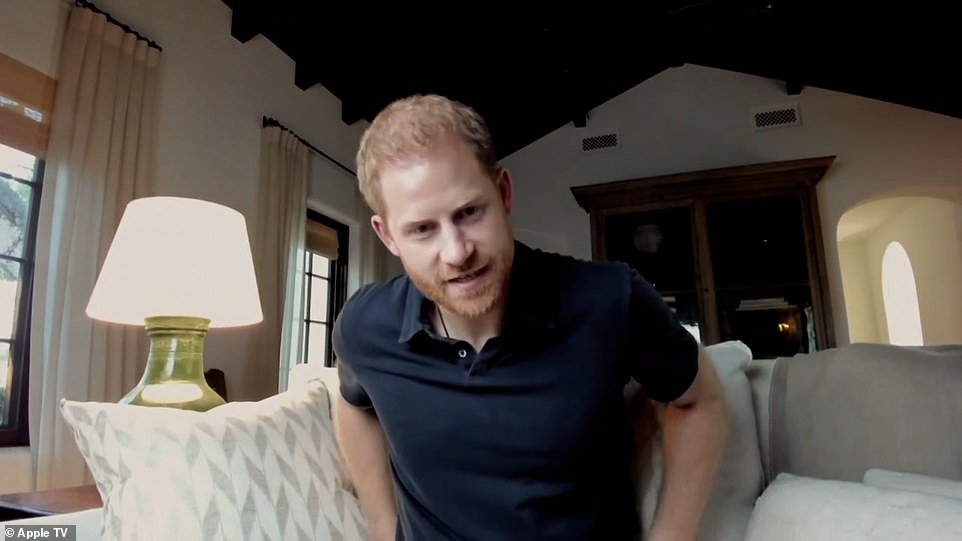 Appearing on the Apple TV programme, Harry told how he remembered ‘everything felt tense’ when he travelled to London 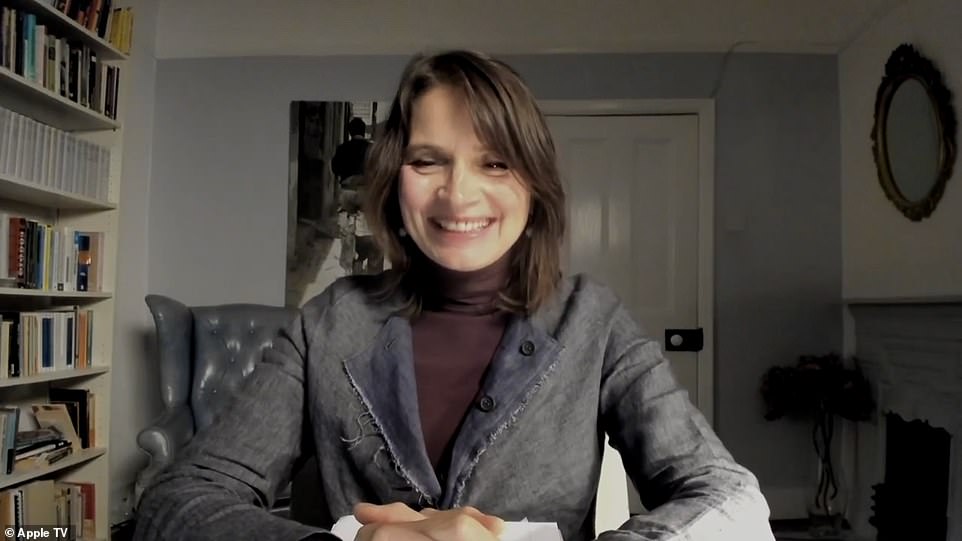 The Duke spoke to Sanja Oakley, a UK-based psychotherapist who used to be a trauma specialist for London Underground

The Duke, who now lives in an £11million mansion in Montecito, California, carried out the therapy via videolink with Sanja Oakley, a UK-based psychotherapist who used to be a trauma specialist for London Underground.

What is EDMR therapy?

The idea is that the mind can heal from trauma by using mental processes that helps to unblock the impact of a traumatic experience so someone can heal from it.

Experts have compared the treatment to the physical practice of removing a foreign object from a wound to help it heal faster.

Ssessions see eye movements used, with the client asked to hold different aspects of a memory in their mind. They are then encouraged to use their eyes to track the therapist’s hand as it moves back and forth across the client’s field of vision.

Studies have connected this with the biological mechanisms involved in rapid eye movement (REM) sleep, which bring out internal associations and help clients process the memory and disturbing feelings.

This is then meant to help clients conclude that EMDR therapy makes them feel empowered by the experiences, with the wounds closed and transformed.

Over 100,000 clinicians around the world are said to have used the therapy, with millions of people treated with it over the past 25 years.

‘And I could never understand why. I was aware of it, I wasn’t aware of it at the time when I was younger, but after I started doing therapy stuff I became aware of it.

‘I was like, why do I feel so uncomfortable? And of course for me London is a trigger, unfortunately, because of what happened to my mum, and because of what I experienced and what I saw.’

He told London-based Ms Oakley: ‘Happens every time. I can’t remember the first time it happened, I can just remember the feeling, anxiety, like a hollow empty feeling almost of nervousness, is it fear? Everything feels tense.

‘It’s being the hunted, and being helpless and knowing that you can’t do anything about it. There is no escape. There is no way out of this.’

Speaking to Oprah in episode three about his work with Ms Oakley, he added: ‘Wherever I could I wanted to understand more about what was going on and why my nervous system was reacting the way that it was.

‘I quickly established that if this relationship was going to work then I was going to have to deal with my past, because there was anger there, and it wasn’t anger at her, it was just anger, and she recognised it, she saw it.

‘Having now done therapy for four and bit years, five years now, for me it’s all about prevention.

‘That doesn’t mean we have to speak to them every single day, but to have someone that can help guide us and create that awareness in our own life to when we might be feeling pain and how to get out of that and what the tools are available to us on any given day to make sure that it doesn’t snowball into something bigger.

‘EMDR is always something that I’ve wanted to try and that was one of the varieties of different forms of healing or curing that I was willing to experiment with.

‘And I never would have been open to that had I not put in the work and the therapy that I’ve done over the years.’ 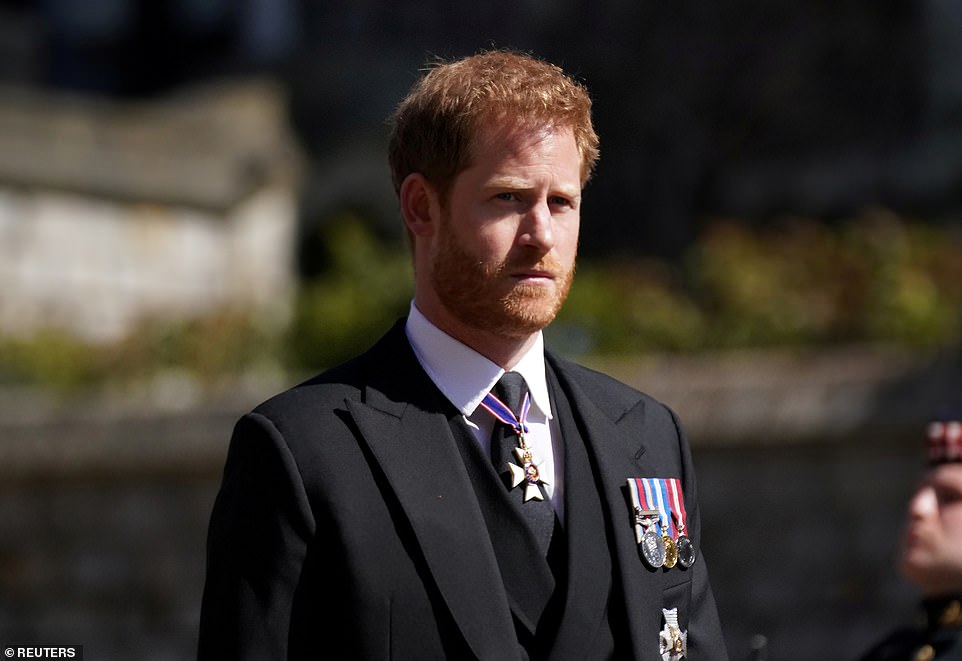 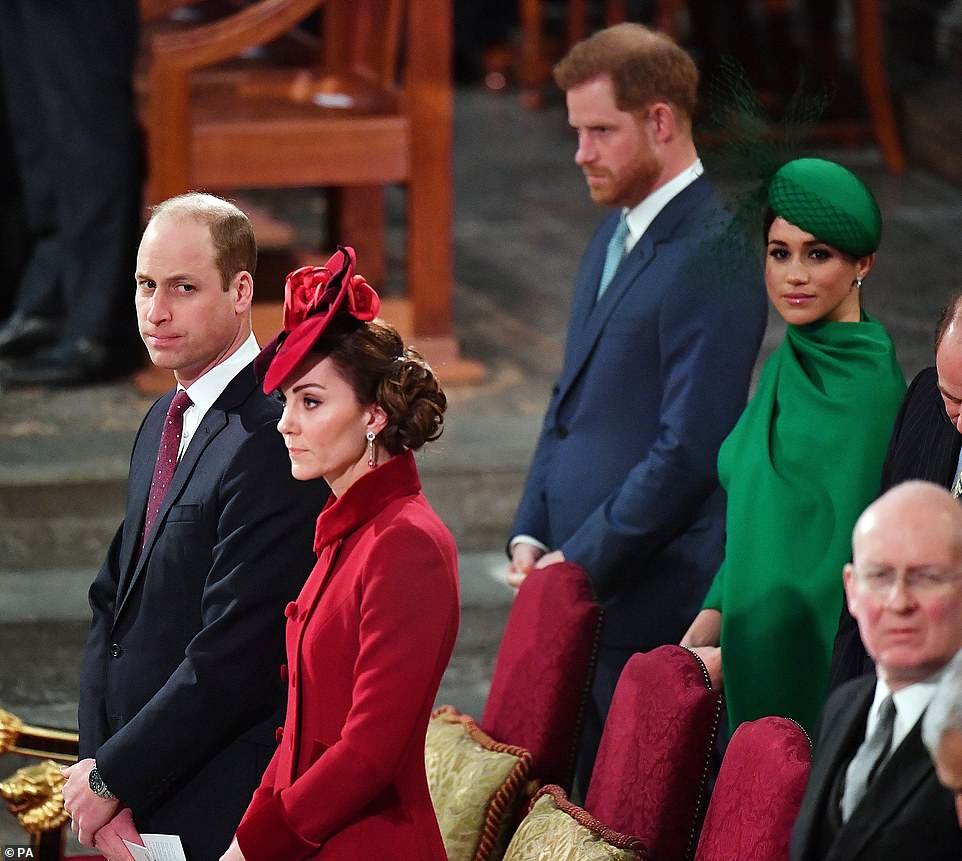 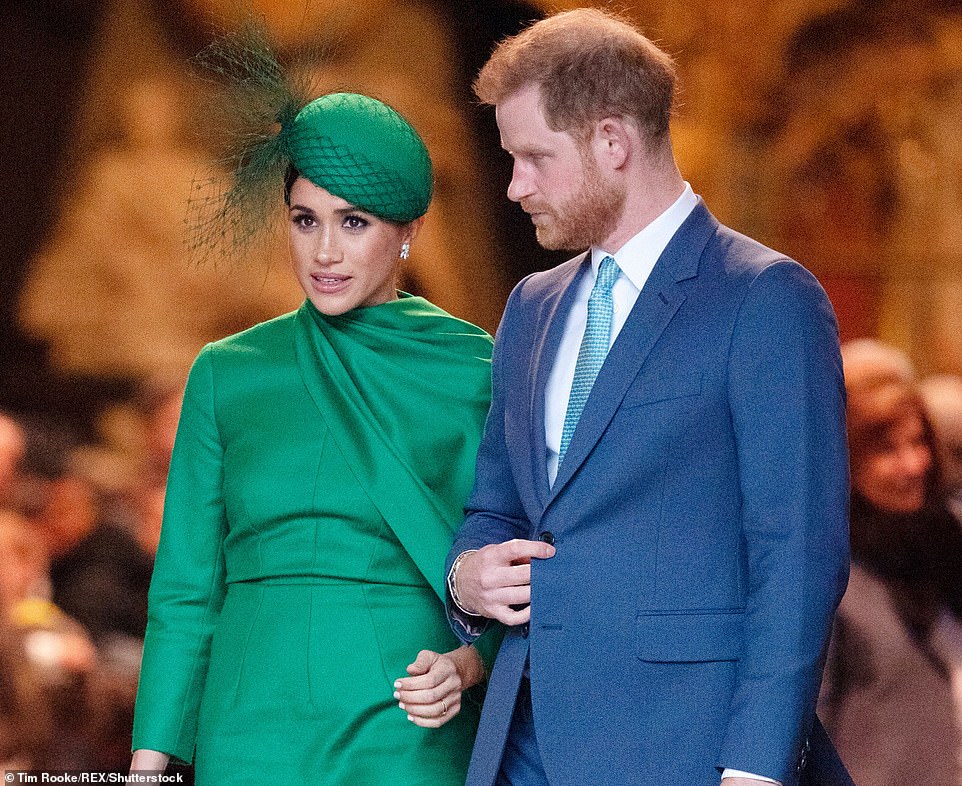 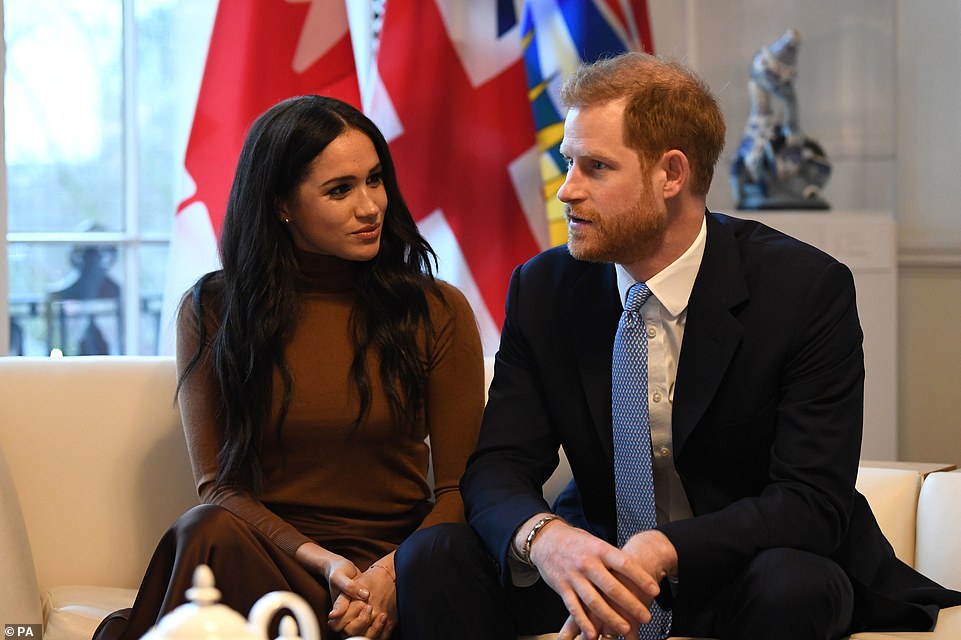 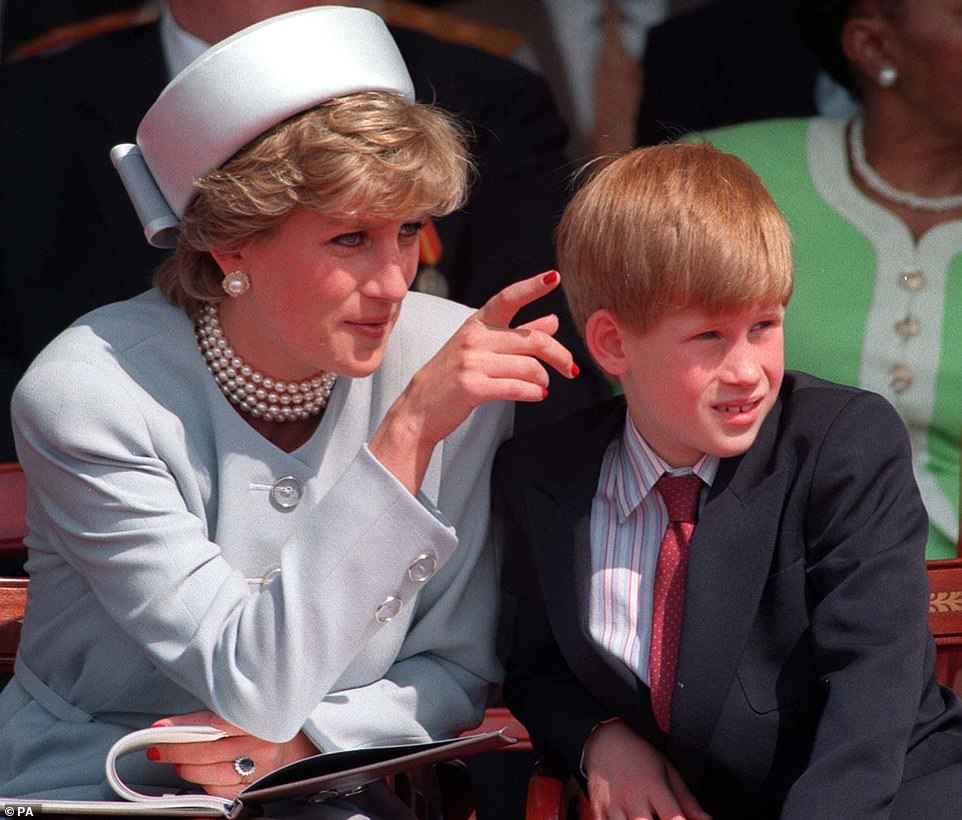 Diana, Princess of Wales with her younger son Prince Harry in May 1995. She died in Paris two years later in August 1997

The duke also told Oprah that his family did not speak about Diana’s death and expected him to just deal with the resulting press attention and mental distress.

The Duke of Sussex has said the trauma of his mother’s death led him to use alcohol and drugs to ‘mask’ his emotions and to ‘feel less like I was feeling’.

Harry was just 12 when Diana, Princess of Wales, died in August 1997 in a car crash while being pursued by the press in Paris.

In the first three episodes of Apple TV’s The Me You Can’t See, the royal addressed traumatic memories from his childhood including the moment he was famously photographed with his brother, father, uncle and grandfather walking behind Diana’s coffin at her funeral.

‘For me the thing I remember the most was the sound of the horses’ hooves going along the Mall,’ the 36-year-old told his series co-host Oprah Winfrey.

‘It was like I was outside of my body and just walking along doing what was expected of me. (I was) showing one tenth of the emotion that everybody else was showing: This was my mum – you never even met her.’

The series focuses on mental health, with Harry telling Opeah the trauma of the loss caused him to suffer anxiety and severe panic attacks from ages 28 to 32.

‘I was just all over the place mentally,’ he said.

‘Every time I put a suit on and tie on … having to do the role, and go, ‘right, game face’, look in the mirror and say, ‘let’s go’. Before I even left the house I was pouring with sweat. I was in fight or flight mode.’

He told Oprah he would drink a week’s worth of alcohol on a Friday or Saturday night ‘not because I was enjoying it but because I was trying to mask something’.

Referring to his attempts to get assistance from his family with the attacks levelled at the Sussexes online, he also said: ‘Every single ask, request, warning, whatever it is, to stop just got met with total silence or total neglect.

‘We spent four years trying to make it work. We did everything that we possibly could to stay there and carry on doing the role and doing the job.’

The series comes after Harry earlier in May appeared to suggest his father, the Queen and the Duke of Edinburgh had failed as parents.

Speaking on the Armchair Expert podcast, the duke said he wanted to ‘break the cycle’ of ‘genetic pain and suffering’ for the sake of his own children.

He said of Charles: ‘He’s treated me the way he was treated, so how can I change that for my own kids?’

‘That doesn’t make sense. Just because you suffered doesn’t mean that your kids have to suffer, in fact quite the opposite – if you suffered, do everything you can to make sure that whatever negative experiences you had, that you can make it right for your kids,’ he said.

The now 36-year-old said his family told him to ‘play the game’ and life would improve. But he objected, telling Oprah: ‘I’ve got a hell of a lot of my mum in me. The only way to free yourself and break out is to tell the truth.’

Harry told Oprah he would ‘never be bullied into silence’ in the future.

He said he did not go to his family when Meghan felt suicidal because he was ashamed the situation had got ‘that bad’ and also suspected the royals would not have been able to help.

The duke said: ‘That was one of the biggest reasons to leave, feeling trapped and feeling controlled through fear, both by the media and by the system itself which never encouraged the talking about this kind of trauma. Certainly now I will never be bullied into silence.’

Pop superstar Lady Gaga and actress Glenn Close also featured in the documentaries, with the singer discussing her serious mental health struggles after she was raped as a teenager.

The documentary series will focus on mental illness and mental wellness and aims to inspire viewers to have an honest conversation about the challenges people face and how to equip themselves with the tools to thrive.

Hours before it aired, Harry joined his brother William in criticising the BBC following an inquiry which found the broadcaster covered up ‘deceitful behaviour’ used by journalist Martin Bashir to secure his headline-making 1995 interview with their mother.