Former prime minister Gordon Brown has called on Boris Johnson to back England players’ decision to ‘take the knee’ at Euro 2020.

It comes after Scotland decided to stand and ministers said the gesture was ‘creating new divisions’ and booing fans want to ‘end racism’.

Speaking to the BBC‘s Nick Robinson, Mr Brown said the players were trying to bring the whole country together.

The anti-racism gesture originated among US football players in 2016, in protest against police brutality and racism in the country, and has since been adopted around the world.

Football players use it to reinforce the message that racism will not be tolerated in the sport.

Mr Brown said: ‘I think it is very important we support the footballers who have made this difficult decision actually because they’ve had to agree among themselves what to do.’

He continued: ‘I don’t think it was right for Downing Street not to support Marcus Rashford, I think Marcus Rashford has stood out for some really good causes over the last year but he’s also standing up for far better race relations (and) community relations in this country.’

Mr Brown added: ‘I think we should support the team when it does this and I hope the crowds who are at the football matches will actually acknowledge that the footballers are doing something very, very important – they are bringing the whole country together.’

Players were met with boos by some fans when taking the knee at the Riverside Stadium in Middlesbrough prior to the friendly matches against Austria and Romania last week.

When asked if he believed Downing Street was trying to avoid a confrontation with those who oppose the move, Mr Brown said he did not believe the PM was responsible for the statement.

‘I would like Boris Johnson to come out publicly and support the England football team and what they do, so I’m not going to say he was behind that statement that was made by Downing Street,’ he said. 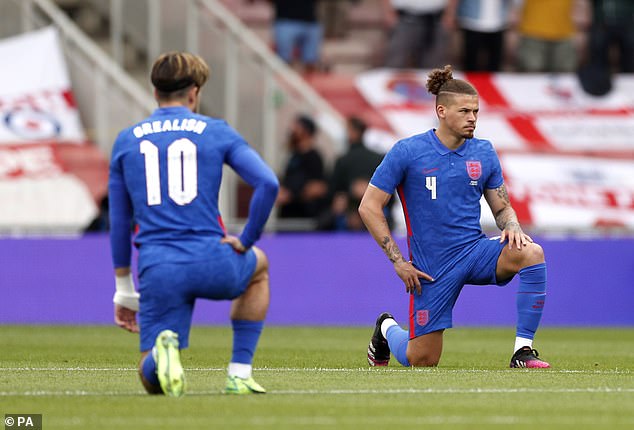 England’s Jack Grealish and Kalvin Phillips take a knee before the international friendly match at Riverside Stadium, Middlesbrough on June 7

‘But I do think it would be very bad for Britain if these culture wars started to develop where someone seized on one instance of someone doing something and tried to make it a big issue that divided the public rather than united the public.’

He continued: ‘There are too many instances where people choose not really such important gestures and decide to make an issue of them as if they are to define the whole country.

‘I think we should stop fighting these culture wars.’

Appearing on the BBC’s Question Time programme, she said: ‘What’s happening here is this in itself is actually being more divisive, it’s creating new divisions’.

Ms Keegan said ‘people have to make their own decisions’ when deciding whether to take the knee or not.

She added: ‘It’s not my judgment to say whether they should take the knee or not. They’re perfectly free to do what they want.’

She defended those jeering from the terraces, saying: ‘And by the way, the people who are booing, I’m pretty sure most of them would like to end racism as well.

‘They disagree. There’s a lot of things that have been, you know, there’s different things that people are interpreting.’

Ms Keegan added that many Conservative MPs were opposed to players taking the knee because they do not agree with some of the goals of the Black Lives Matter movement. 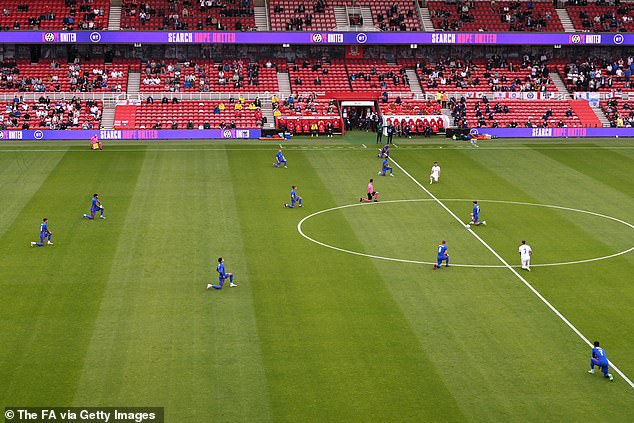 During the group stage clash with England, Scotland will remain standing prior to kick-off. Pictured, both teams took a knee before a match between England and Romania on June 6

‘Black Lives Matter stands for things that they don’t stand for. It’s really about defunding the police and the overthrow of capitalism, which is, you know, Black Lives Matter the actual political organisation,’ she said.

England boss Gareth Southgate has said the players will continue to make the gesture in future matches.

Critics of taking the knee say the gesture has political overtones but anti-discrimination group Kick It Out, the Football Supporters’ Association and England fans group Block 109 have called on fans to show their support to the team.