‘That’s a very good answer!’ Queen is impressed by Canadian officer deployed to Bahrain who tells her son, 3, she’s away ‘fighting pirates’ during video call to celebrate 100 years of the Armed Force’s Legal Branch

By Jessica Green For Mailonline

The Queen has presented the Canadian Armed Forces Legal Branch with a Royal Banner to mark 100 years since it was established.

Consisting of approximately 300 personnel, the branch provides legal advice and support to the Canadian Armed Forces and the Department of National Defence, both at home and overseas on deployment.

Her Majesty, 95, based at Windsor Castle, joined a video call with members from the Legal Branch – including a Canadian officer who revealed the only way to explain her overseas deployment to her young son was to tell him she was ‘fighting pirates’.

The Queen, sporting a brooch gifted to her by the people of Canada in 2017, smiled as she replied: ‘That’s a very good answer because that’s probably true, isn’t it.’ 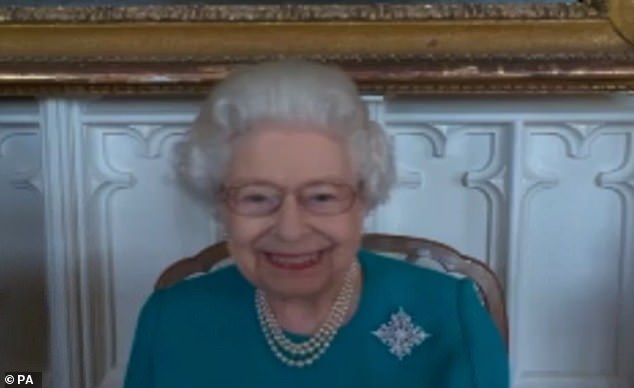 Major Angela Orme spoke via a video call from Bahrain, where she is deployed on the Royal Canadian Navy’s counter-terrorism and maritime security mission, working to deter the trafficking of illicit narcotics in the region.

After almost seven months away from her two children, aged two and three, the Queen asked: ‘So you must miss them very much?’

Major Orme, who works as a legal adviser to the Commander of the Combined Task Force 150, which conducts maritime security operations outside the Arabian Gulf, replied: ‘I do miss them very, very much but I hope that one day when they understand why mum was gone, that they’ll be proud of me.

‘And they actually do think I’m pretty cool right now because I didn’t know how to explain it to my three-year-old son what mum was doing, so I just told him that I’m away fighting pirates, and he thought that was pretty neat.’

The monarch was joined on the video call by Rear-Admiral Genevieve Bernatchez, Judge Advocate General, and other members of the Legal Branch. 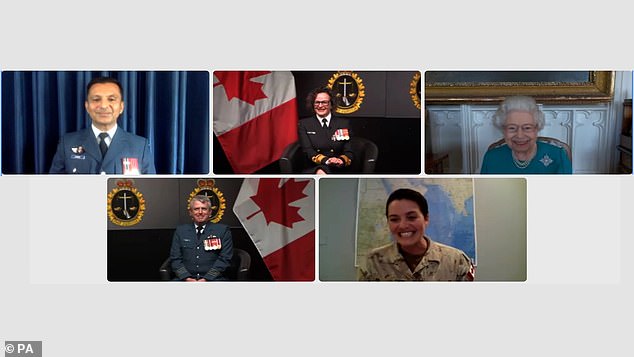 Her Majesty, 95, based at Windsor Castle, joined a video call with members from the Legal Branch (pictured) – including a Canadian officer (pictured bottom right) who revealed the only way to explain her overseas deployment to her young son was to tell him she was ‘fighting pirates’

Speaking from Winnipeg, Lieutenant-Colonel Noor Ahmed told the Queen about the domestic work of the Canadian Armed Forces, who have been supporting the healthcare system throughout the pandemic, and providing vital resources to elderly care facilities and remote First Nation communities.

The Queen replied: ‘Yes, that is what’s been happening here too, that the Armed Forces have done a huge job about vaccinations and things like that.’

Lieutenant-Colonel Noor Ahmed also recalled meeting the Queen while serving as a boy Scout, when she visited Stratford, Ontario, in 1973.

As part of celebrating the presentation of the Royal Banner, the Legal Branch will plant a tree in Ottawa in the Queen’s honour.

Dressed in an elegant green outfit, the Queen donned a brooch gifted to her by the people of Canada for her Sapphire jubilee in 2017.

Featuring both diamonds and the pale blue stone itself, the pin was given to her by the former Governor-General of Canada, David Johnston on behalf of the nation’s people.