Matt Hancock quit the Cabinet after 80 Tory MPs expressed fury at his initial attempt to cling on – but the ex-health secretary ‘will not accept £16,000 payout he is entitled to’


Matt Hancock finally decided to quit as health secretary after he was told that 80 Tory MPs had complained about his attempt to cling on, it was claimed today.

Mr Hancock announced his resignation on Saturday evening, following the leaking of video footage showing him breaking social distancing rules by kissing an aide in his ministerial office.

He had initially tried to stay in the job as he issued an apology on Friday afternoon and Number 10 said Boris Johnson believed the matter was closed.

A phone call with the Tory Chief Whip Mark Spencer is said to have contributed to the subsequent decision to step down as the scale of backbench fury was spelled out to the Cabinet minister.

Meanwhile, reports this morning suggested that Mr Hancock will not accept a £16,000 payoff to which he is entitled after resigning.

Matt Hancock finally decided to quit as health secretary after he was told that 80 Tory MPs had complained about his attempt to cling on, it was claimed today 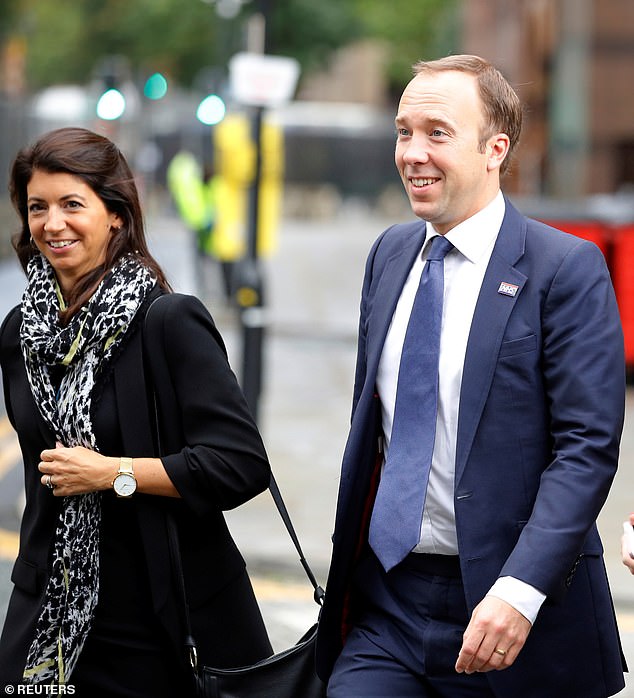 Mr Hancock walks with his aide Gina Coladangelo outside the venue for the Conservative Party annual conference in Manchester, Britain, September 30, 2019

Mr Johnson has faced criticism from some quarters for deciding to initially back Mr Hancock.

Justice Secretary Robert Buckland said this morning that there was a change in tact when it became apparent at the backlash.

Asked why Mr Johnson backed Mr Hancock and then changed his mind, Mr Buckland said: ‘I think there was a swirl of things going on here.

‘There were of course the private matters, the private life matters, and indeed as the hours went by it was clear that there was, I think, an understandable groundswell of concern about how important it is that those who set the rules keep to them.

‘I think that when we look back at this we will see that it took a day or so but the right outcome was achieved and it was correct for Matt Hancock to resign.’

The Telegraph reported that Mr Hancock had a ‘fairly direct’ conversation with Mr Spencer on Saturday lunchtime.

A source told the newspaper: ‘There were 80 Tory MPs saying he should go at that time.’

Mr Hancock informed Mr Johnson later in the afternoon that he had decided to resign.

One Government source said that Mr Johnson had initially backed Mr Hancock because he believes in standing by his top team. 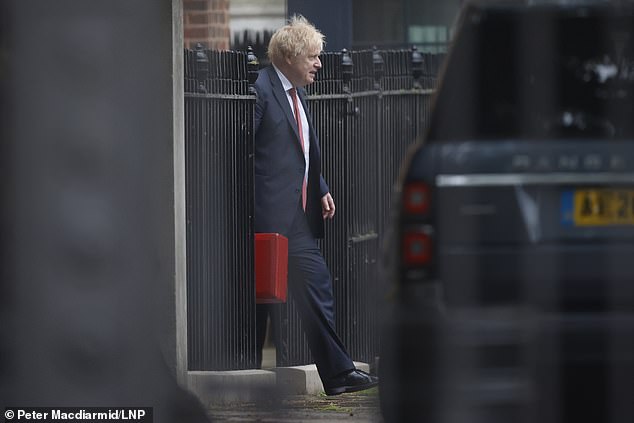 Boris Johnson, pictured at the back entrance to Downing Street this morning, has faced criticism from some quarters for deciding to initially back Mr Hancock

They told The Times: ‘The Prime Minister stands by his people. He stood by Priti [Patel], he stood by [Robert] Jenrick, it’s what he does. He doesn’t like giving in to pressure.’

Mr Hancock was rapidly replaced as health secretary by Sajid Javid who returned to the Cabinet after quitting as Chancellor in February 2020.

Mr Hancock’s resignation entitles him to a payoff which is given to ministers when they leave the frontbench.

However, both The Times and The Telegraph reported that Mr Hancock does not intend to accept the cash.