‘Worst football club in the world’ offers LIONEL MESSI a contract as he becomes a free agent: Argentinian striker must say Pele is better than Diego Maradona as part of Brazilian side’s hilarious deal

By David Averre For Mailonline


Lionel Messi has been offered a contract by the self-proclaimed ‘worst team in the world’ after he became a free agent.

Ibis Sport Club from Recife, Brazil, earned a spot in the Guinness Book of World Records for going a whopping three years and 11 months without a win.

The contract, which they published on their Twitter account to nearly 300,000 followers, says Messi must swear that Pele is better than Argentine legend Diego Maradona and that he must not become a champion, otherwise his contract will be terminated.

Messi, 34, has been one of the world’s best players for over a decade but is now a free agent after his contract with Barcelona expired at midnight on June 30.

Ibis Sport Club (pictured) once went three years and 11 months without a win, earning them a place in the Guinness Book of World Records 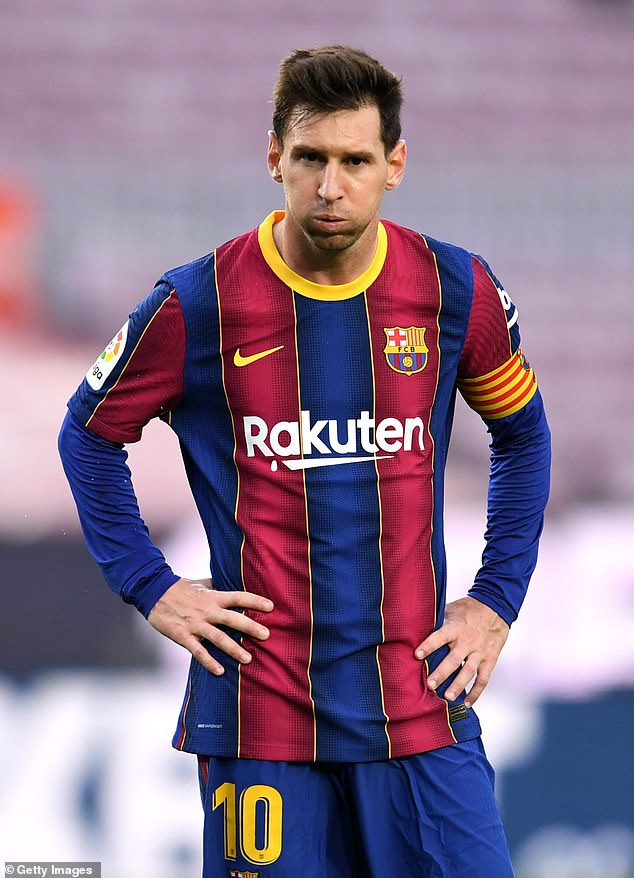 Messi, 34, began playing for Barcelona at under-14 level and remained with the club throughout his career, helping them to 10 La Liga titles and four Champions League titles

Ibis Sport Club play in the lowest tiers of Brazilian football and have long carried a reputation amongst fans and journalists alike as the worst team in football.

Their reputation for being the worst club in the world was solidified in the 1980s when the team went three years and 11 months between 1980 and 1984 without winning a game.

The club’s No. 10 shirt, which is typically the number worn by Messi for Barcelona and Argentina, was retired in honour of club legend Mauro Shampoo.

He once bragged that he scored only one goal in 10 years.

After hearing that Messi’s contract with Barcelona had expired, the team quickly rustled up a proposed contract with terms that would make even the Argentine magician flinch: 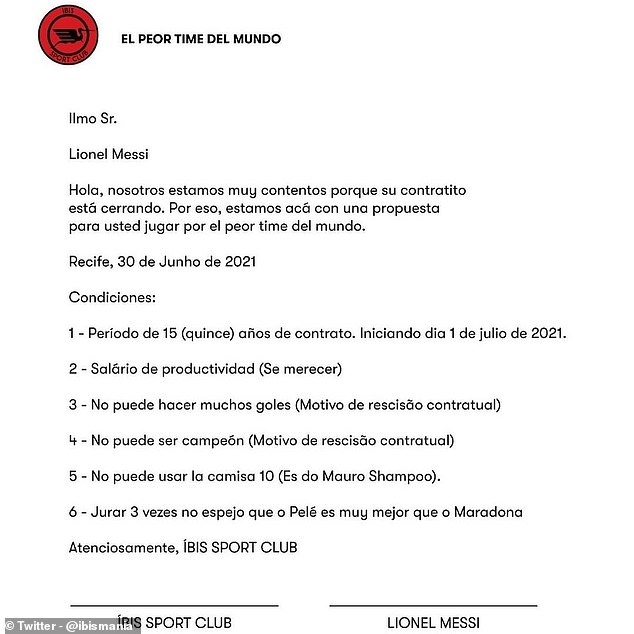 Ibis Sport Club’s proposed 15-year contract for Messi, which they published on Twitter to almost 300,000 followers

MESSI BY THE NUMBERS

Lionel Messi is considered to be one of the greatest footballers ever to play the game and has a staggering list of achievements to his name.

He holds more Ballon d’Or awards than any other player (6), holds the record for the most goals in La Liga (474) and has scored 776 goals for club and country so far in his professional career.

However, his contract with Barcelona expired on June 30, making Messi a free agent who can be signed by any club.

Messi relocated to Barcelona from his native Argentina at age 13 to play for the Barcelona under-14 team.

He quickly excelled through the ranks and has gone on to carve out one of the greatest careers in world football.

He has played his entire professional career at Barcelona, helping the team to 10 La Liga titles and four Champions League titles in the process.

But his relationship with the team became fractured last year when he declared that he wanted to leave.

Messi eventually opted to remain at the Nou Camp, but not before he had released a statement saying that the club’s president at the time, Josep Maria Bartomeu, had not kept his word on allowing Messi to leave.

Talks with Barcelona for a new contract are believed to be ongoing, but it remains to be seen where one of the greatest footballers of all time will play out the remainder of his career.