Katy Perry and her fiancé Orlando Bloom looked completely loved-up as they enjoyed a double date with Sophie Turner and Joe Jonas in Paris on Monday.

The happy couple, who have most recently been living it up at a luxury resort in Turkey, beamed while posing with the Game Of Thrones actress, 25, and singer, 31, at a Louis Vuitton Parfum dinner in the city.

Both couples took a night off from parenting duties to enjoy the star-studded event, with Katy, 36, rocking a semi-sheer shimmering silver dress and Sophie opting for a stylish white blazer-style dress.

What a date night! Katy Perry and her fiancé Orlando Bloom looked completely loved-up as they enjoyed a double date with Sophie Turner and Joe Jonas at a Louis Vuitton Parfum dinner in Paris on Monday

Katie looked incredible in her statement ensemble which featured a violet hued feathering at the hem while her beau rocked a quirky black waistcoat-type accessory over a sharp white shirt.

She wore her blonde locks in choppy waves and added a smoky look to her lashes and a pop of pink to her pout.

Ahead of the meal, Katy and Orlando put on a cosy display on the red carpet with the hunky actor planting a kiss on his wife-to-be’s cheek.

Sophie also ensured to catch the eye in a striking white dress with caped sleeves and gold buttons, which she paired with knee-high black boots. 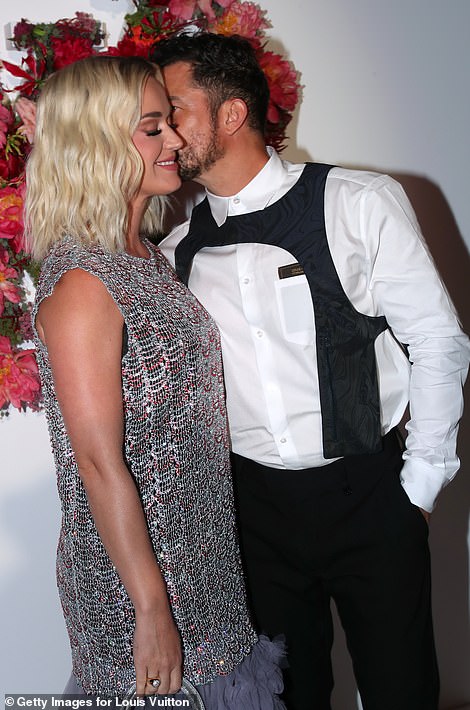 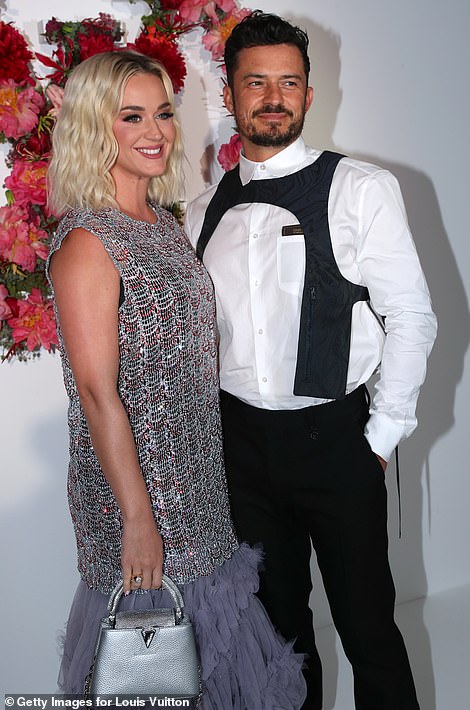 Loved-up: The happy couple, who have most recently been living it up at a luxury resort in Turkey, beamed while working all their angles on the red carpet, with Orlando also placing a sweet kiss on Katy’s cheek

The actress wore her locks slicked back into a tight up do and toted a small silver Louis Vuitton handbag with a chain handle while working all her angles for the camera.

Her husband also pulled out all the fashion stops for the glam evening, sporting a white jumper with the words ‘separate fashion from fiction’ written in black across the front.

Elsewhere, model Bella Hadid showcased her sizzling figure in a sequinned dress with a sparkling frill and large chiffon bow on the front.

The brunette beauty wore her long locks down and added some extra height to her toned frame in a pair of funky black boots. 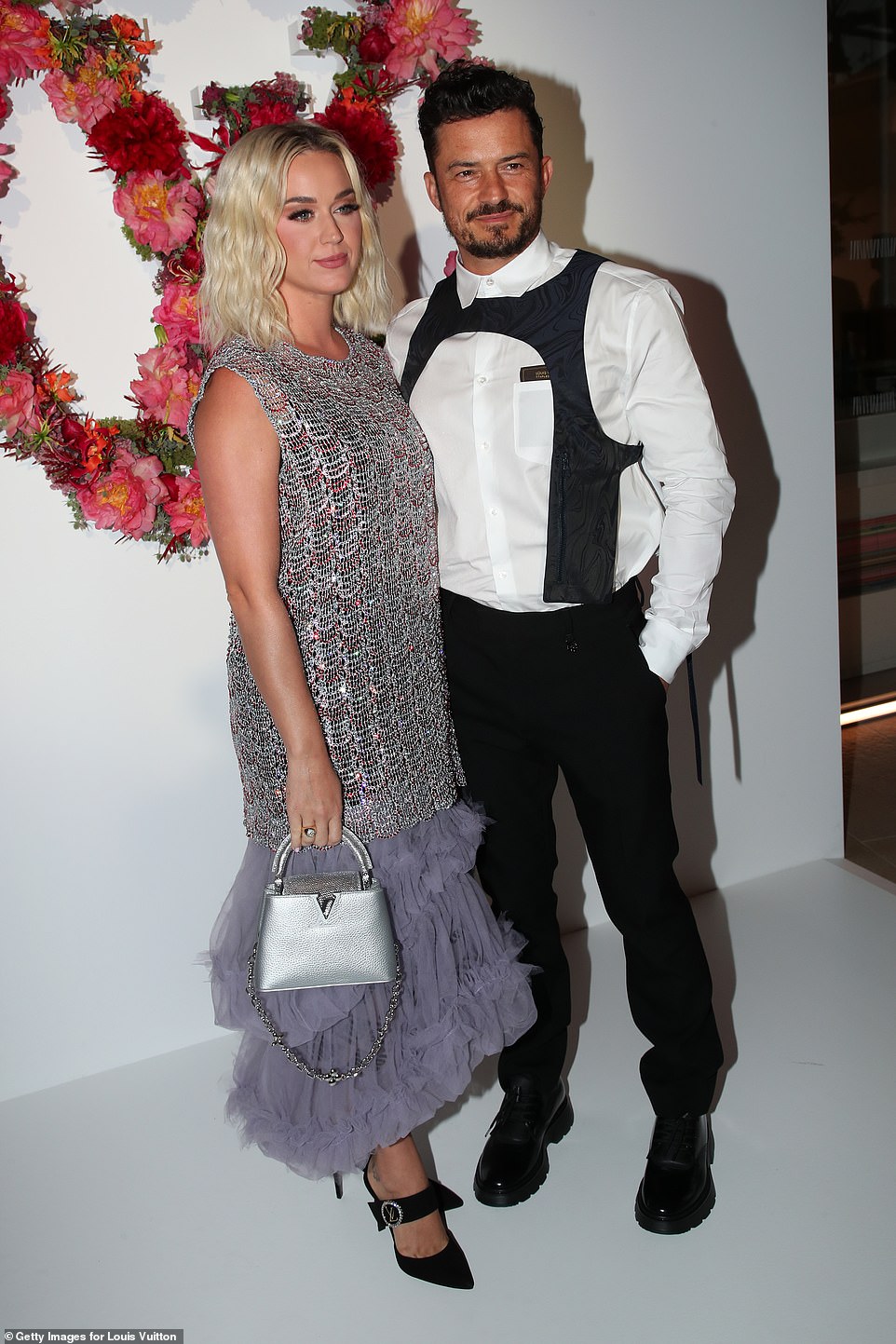 Standout: Orlando rocked a quirky black waistcoat-type accessory over a sharp white shirt and styled his look with boots 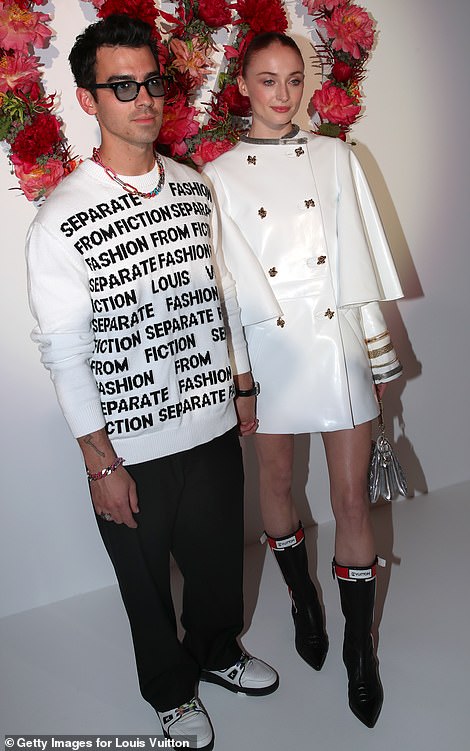 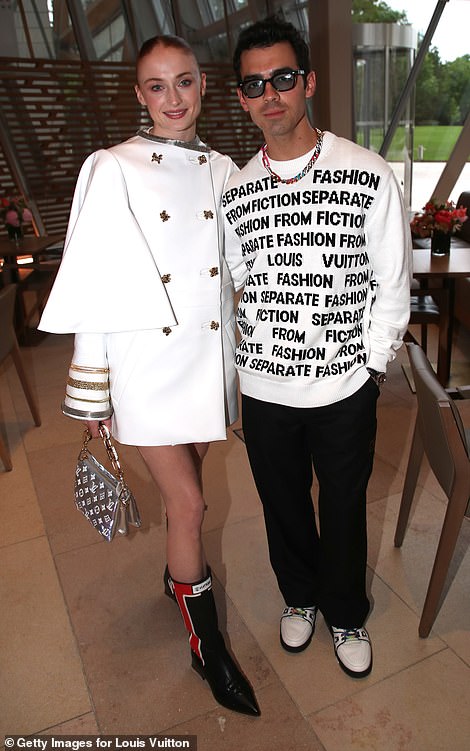 Power couple: Sophie also ensured to catch the eye in a striking white dress with caped sleeves and gold buttons, which she paired with knee-high black boots 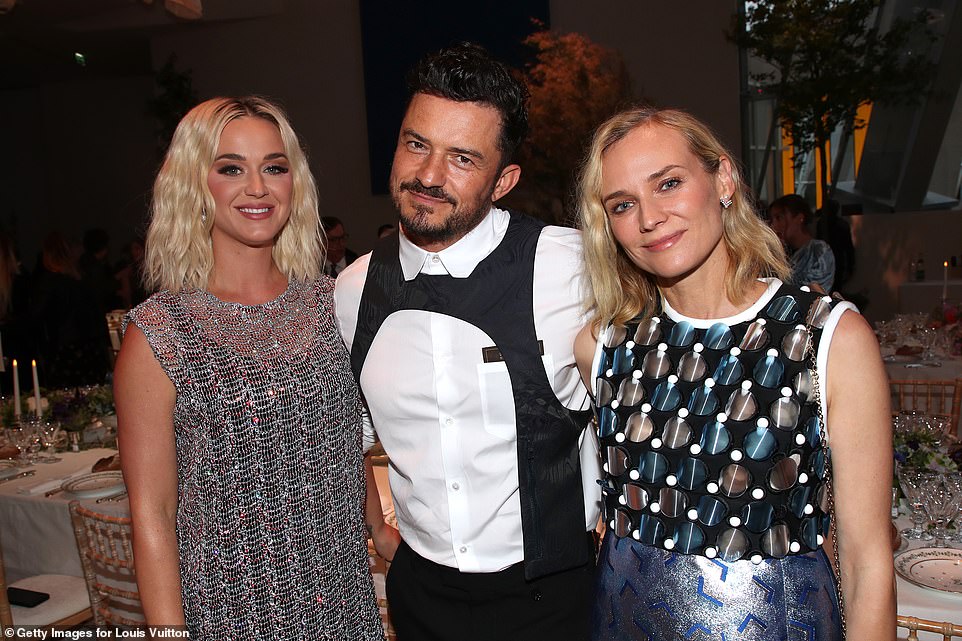 Star-studded: Katy and Orlando posed for a snap with actress Diane Kruger who dazzled in a shimmering top and skirt

The night out comes after Katy posted a romantic snap of her kissing fiancé Orlando as they posed at the luxury Six Senses Kaplankaya resort in Turkey.

The couple appeared to be on cloud nine as they posed at the luxury, private escape, that boast spacious, multi-bedroom residences, all with private infinity pools overlooking the sparkling Aegean sea.

The duo are currently enjoying a break across Europe with their 10-month old daughter Daisy and previously stopped off in Italy and Greece.

Katy and Orlando began dating in 2016 and split up the following year before they reunited in February 2018.

The couple got engaged the following February and welcomed their daughter Daisy Dove in August 2020.

Speaking to the latest edition of L’Officiel USA, Katy gushed about her other half for not only the way he treats their daughter but also how he acts as a dad to his son Flynn, from a previous relationship.

Katy gushed about Orlando’s relationship with the 10-year-old he shares with model Miranda Kerr as she said: ‘I was able to witness him and his fatherhood.

‘The way that he showed up for him and continues to show up for him, and the efforts that he makes and the distance he goes, I think that’s one of the reasons I made that conscious decision.

‘I was like, “Here’s the father of my future children.” I could see his kindness, empathy, care, and tenderness. I courted that. I was like, ‘Okay, this is different.’

‘And this is his first girl, so it’s a totally different feeling for him. I’m really, really grateful to have him. And he really shows up in a huge emotional way, which is unique for me.’

Orlando proposed on Valentine’s Day 2019 and in an interview with Vogue India last year Katy gushed about their ‘spiritual journey’ and called him ‘a saint.’

The Roar singer also said that her relationship with her child has brought her the unconditional love she had always been searching for.

She explained: ‘As a performer I’ve always relied on the love and acceptance and validation of the outside world and that ultimately can waver at times.

Katy – who has previously had high-profile relationships with Russell Brand and John Mayer – even said that the birth of her daughter and relationship with Lord Of The Rings star Orlando even healed wounds she gained from past relationships.

She said: ‘I always felt like I was walking around with a little bit of pain in my heart concerning love.

‘And my fiancee has done a great job at really helping to mend that. But this just went underneath all that and got so deep. It’s just there, that love is there.

‘I’d heard about unconditional love, but now I’m really experiencing it. There’s a wholeness that has happened.’