Boris vows to boost the Red Wall AND the shires: PM insists ‘levelling up’ agenda in the Midlands and North WON’T hurt Tory heartlands or make ‘rich areas poorer’ as he scrambles to ease nerves after by-election defeat to Lib Dems


Boris Johnson today scrambled to reassure southern voters that his ‘levelling up’ agenda will not leave them out in the cold.

The Prime Minister insisted that his drive to boost ‘Red Wall’ areas where the Tories have been surging politically does not mean ‘rich areas get poorer’.

Speaking in the Midlands, he said it is an ‘outrage’ that people in Blackpool have far lower life expectancy than in other wealthier areas.

And he stressed that many of the differences were within regions – pointing out the striking variation in fortunes between Leeds and Bradford.

Mr Johnson said fuelling the economy in other parts of the economy would not be ‘bad for London’, arguing it means ‘more customers and more business for our national metropolis’.

‘Levelling up is not a jam spreading operation,’ he said. ‘It is win-win for the whole UK.’

The premier said the UK was the most ‘unbalanced’ developed economies in the world and had been ‘firing on one cylinder’ for too long.

The intervention is designed to soothe Tory jitters over last month’s Chesham and Amersham by-election defeat to the Liberal Democrats.

Mr Johnson will say that the Government’s success will hinge on whether it can ‘raise living standards, spread opportunity, improve our public services and restore people’s sense of pride in their community’, particularly in areas that had been left behind.

Mr Johnson warned that previous governments invested too much in ‘areas where house prices are already sky high and transport is already congested’.

He added: ‘By turbo-charging those areas, especially in London and the South East, you drive prices even higher and you force more and more people to move to the same expensive areas.

‘And the result is that their commutes are longer, their trains are more crowded, they have less time with their kids.

‘They worry at the same time that the younger generation won’t be able to get a home and that their leafy suburb or village will be engulfed by new housing development but without the infrastructure to go with it.’

The PM insisted: ‘We don’t want to decapitate the tall poppies. We don’t think you can make the poor parts of the country richer by making the rich parts poorer.’

The ‘level up’ pledge was seen as central to smashing Labour’s ‘Red Wall’ seats in the Midlands and the North. But Mr Johnson did not add much more flesh to the policy in his speech today.

Former No 10 adviser turned Tory MP Neil O’Brien has been recruited to work out details of the plans.

The agenda will include a focus on local infrastructure projects and the regeneration of high streets. 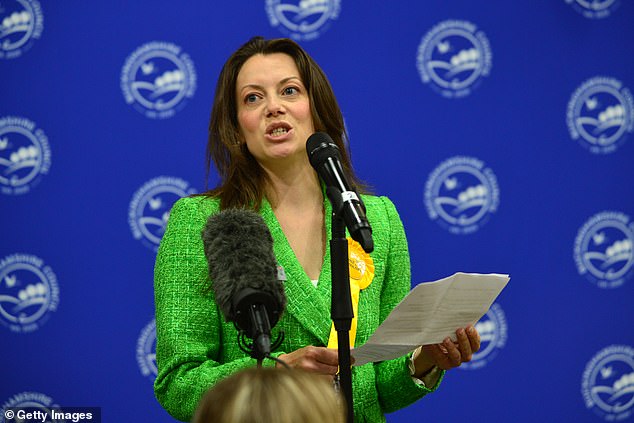 The Chesham by-election’s 25 per cent swing to the Lib Dems came as a shock to southern Tories.

One MP said: ‘You can’t bang on about levelling up the North without voters in the South starting to wonder what’s in it for them.’

Meanwhile, the Government will today confirm plans for eight new hospitals – the first batch of a promised 40 by 2030.

Four will be in the West Midlands, Cumbria, Liverpool and Brighton, with four more expected in London, Manchester, Nottingham and Northumberland.