Sensational radio images of jets pouring from a supermassive black hole have helped astronomers confirm ‘little’ black holes act the same way as the largest ones.

The Event Horizon Telescope, a global network of radio telescopes, captured details of the giant black hole at the heart of the nearby radio galaxy Centaurus A.

The same team were the first to directly image a black hole when they photographed the gargantuan stellar phenomenon Messier 87 in 2019.

The team, including astronomers from the Max Planck Institute in Germany, pointed radio telescopes at the massive jets of plasma coming from the centre of galaxy Centaurus A, which is about 13 million light years from the Earth.

The data shows the jet launched by the back hole is brighter at the edges than the centre, something also seen in other black hole jets, but never so pronounced.

They say that the new images and data gathered will allow future, high resolution direct imaging of the black hole itself, using future space-based telescopes.

Authors also found that their observations match what would be expected form Albert Einstein’s theory of general relativity and suggest that the largest supermassive black holes are ‘scaled up versions’ of smaller black holes.

The radio galaxy Centaurus A is 13 million light years from the Earth.

It was first discovered in 1826 by Australia-based Scottish astronomer James Dunlop.

The galaxy is one of the closest radio galaxies to the Earth and so its active galactic nucleus has been studied widely in various resolutions.

There is debate over whether it is a lenticular galaxy or a giant elliptical galaxy.

The supermassive black hole at the centre has been extensively studied, in part due to the relativistic jet emitted and visible in X-ray and radio wavelengths.

Compared to all previous high-resolution observations, they have now capture the jet at a tenfold higher frequency and sixteen times sharper resolution.

The ‘resolving power’ of the telescope is so high that they could pinpoint the origin of the jet to the centre of the black hole itself.

A magnification fact of one billion.

Supermassive black holes residing in the centre of galaxies like Centaurus A are feeding off gas and dust that is attracted by their enormous gravitational pull.

This process releases massive amounts of energy and the galaxy is said to become ‘active’. Most matter lying close to the edge of the black hole falls in.

However, some of the surrounding particles escape moments before capture and are blown far out into space at speeds approaching the speed of light.

These jets, one of the most mysterious and energetic features of galaxies, are born from this escaping particles.

Astronomers have relied on different models of how matter behaves near the black hole to better understand this process.

They don’t know exactly how jets are launched from the central region of a galaxy or how they extend over scales larger than their host galaxies without dispersing.

The EHT aims to resolve this mystery and learn more about black holes, as well as why the edges of the jets appear brighter than the central areas.

‘Now we are able to rule out theoretical jet models that are unable to reproduce this edge-brightening,’ said Matthias Kadler from the University of Würzburg in Germany. 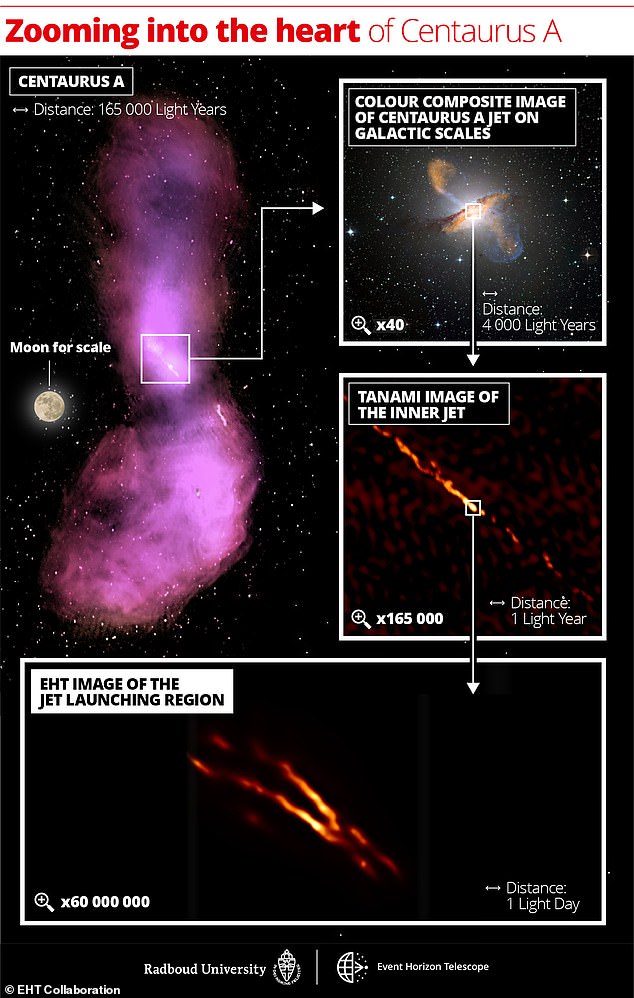 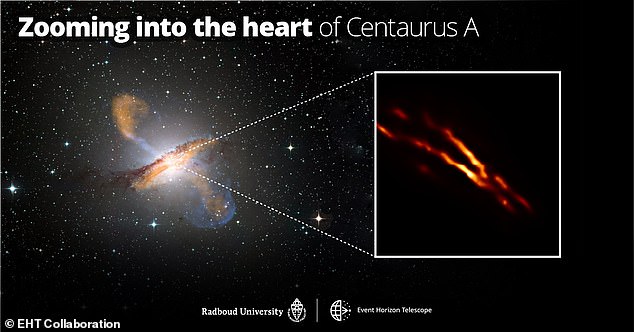 Studying the jet from Centaurus A allowed the team to predict exactly where the black hole will be, which can be used by space based observatories to directly image the phenomenon

They made this discovery down to a scale of less than a lightday.

These findings suggest that black holes behave similarly over a wide range of masses.

Astronomers turned their radio telescopes toward Centaurus A, the nearest active galaxy to Earth with a strong plasma jet.

The first direct image of a black hole was at the centre of M87, with a mass of over 6 billion times the sun.

Galaxy Centaurus A is less massive than M87 and its supermassive black hole accumulates only a fraction of the material as the one in M87.

Centaurus A bridges the gap between the behemoth black hole in M87 and the one in the Milky Way galaxy.

Peering down to 0.6 lightdays away from the black hole, the authors found that the jet appears as a hollow bi-cone with bright edges.

They observed that the overall geometry and properties of the jet bear a striking resemblance to those of the jet in M87, as well as to jets launched by smaller black holes.

This finding supports the idea that massive black holes are scaled-up versions of their lighter counterparts.

‘It’s a striking feature that will help us better understand jets produced by black holes,’ the TANAMI leader and professor for astrophysics explained.

With the new EHT observations of the Centaurus A jet, the likely location of the black hole has been identified at the launching point of the jet.

Based on this location, the researchers predict that future observations at an even shorter wavelength and higher resolution would be able to photograph the central black hole of Centaurus A.

This will require the use of space-based satellite observatories, as data from Earth telescopes aren’t high enough resolution.

‘The new results show that the EHT provides a treasure trove of data on the rich variety of black holes and there is still more to come”, says Heino Falcke, EHT board member and professor for Astrophysics at Radboud University.

To observe the Centaurus A galaxy the EHT collaboration used Very Long Baseline Interferometry (VLBI), the technique used to image the black hole in M87.

An alliance of eight telescopes around the world joined together to create the virtual Earth-sized Event Horizon Telescope. The EHT collaboration involves more than 300 researchers from Africa, Asia, Europe, North and South America.

The first image of a black hole – the orange ‘doughnut’ – in the supergiant elliptical galaxy M87, captured by the Event Horizon Telescope in 2019, revealed remarkable consistency with predictions based on Einstein’s theory of general relativity.

It remains unclear whether matter in the vicinity of a less massive black hole or a black hole that accumulates matter less vigorously behaves differently than in M87.

Michael Janssen and colleagues turned their radio telescopes toward Centaurus A, the nearest active galaxy to Earth with a strong plasma jet.

This galaxy is less massive than M87 and its supermassive black hole accumulates only a fraction of the material as the one in M87.

Peering down to 0.6 lightdays away from the black hole, the authors found that the jet appears as a hollow bi-cone with bright edges.

They observed that the overall geometry and properties of the jet bear a striking resemblance to those of the jet in M87, as well as to jets launched by black holes of stellar masses.

This finding supports the idea that massive black holes are scaled-up versions of their lighter counterparts.

The findings have been published in the journal Nature Astornomy.

HOW DOES THE EVENT HORIZON TELESCOPE WORK? 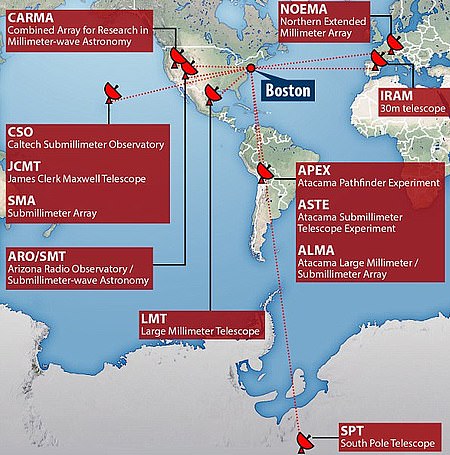 Using a ‘virtual telescope’ built eight radio observatories positioned at different points on the globe, the team behind the Event Horizon Telescope has spent the last few years probing Sagittarius A*, the supermassive black hole at the heart of the Milky Way, and another target in the Virgo cluster of galaxies.

The observations relies on a network of widely spaced radio antennas.

These are all over the world – in the South Pole, Hawaii, Europe and America.

These radios mimics the aperture of a telescope that can produce the resolution needed to capture Sagittarius A.

At each of the radio stations there are large hard drives which will store the data.

These hard drives are then processed at the MIT Haystack Observatory just outside Boston, Massachusetts.

The effort is essentially working to capture a silhouette of a black hole, also commonly referred to as the black hole’s shadow.

This would be ‘its dark shape on a bright background of light coming from the surrounding matter, deformed by a strong spacetime curvature,’ the ETH team explains.