She confirmed the news to Top Chef’s Gail Simmons on her Unfiltered podcastFaris first met Barrett on set of her 2018 comedy flick Overboard Anna was previously married to Chris Pratt, who she shares son Jack, eight, with

By Kelby Vera For Dailymail.com

Anna Farris has confirmed she is married to Michael Barrett, not long after he was spotted wearing a simple wedding band during dinner with the star on Tuesday evening.

The Mom actress, 44, revealed she and Barrett recently eloped with a courthouse marriage while talking to Top Chef’s Gail Simmons on her Unfiltered podcast.

The Scary Movie star first confirmed the engagement during an appearance on The Late Late Show with James Corden in February 2020.

Mrs! Anna Faris confirmed she is married to Michael Barrett during the most recent episode of her Unqualified podcast. She’s seen in 2018 above

On Tuesday Anna and Michael were seen enjoying a cozy dinner with her son Jack, eight, at Tallula’s Mexican restaurant in Santa Monica.

Anna and the 42-year-old Marvel star famously split in August 2017 after eight years of marriage. Their divorce was finalized in October 2018, as reported by TMZ.

Pratt went on to date Arnold Schwarzenegger’s daughter Katherine, who he would propose to in January 2019. 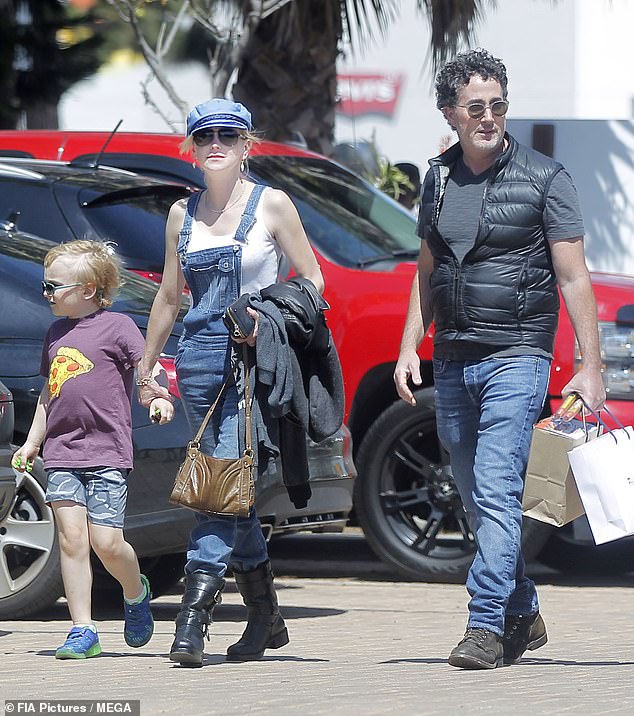 Modern family: Anna is seen with Michael and her son Jack above in May 2019

Former flame: Anna was previously married to actor Chris Pratt, who she shares eight-year-old son Jack with; Chris and Anna pictured in 2014

‘Sweet Katherine, so happy you said yes! I’m thrilled to be marrying you,’ Chris wrote in an Instagram post confirming the proposal.

The pair wed on June 8, 2019 and welcomed their first child together, daughter Lyla, in August 2020.

They were first pictured out together in September 2016, with a source divulging to People at the time that Anna had been ‘hanging out with Michael for weeks’ and had just ‘started seeing each other more frequently.’

Anna and Michael have kept their relationship extremely private.

It was Faris’ Mom costar Allison Janney who first spilled the beans on the pair’s secret engagement.

‘They’ve been engaged for a long time,’ revealed Janney in an interview with Us Weekly in January 2020. ‘I kept it very quiet, I’ll have you know! So, I celebrated with them a long time ago.’

She noted to the outlet that she had no knowledge of the proposal until she ‘saw the ring one day’ on set of her and Anna’s now-canceled CBS sitcom.

‘I went into her room to work on lines, and then I was like, “What is that ring on your finger?” she recalled.

‘I think she was waiting for everyone to notice. “Oh, that’s it,” and then, yeah, it was fun.’